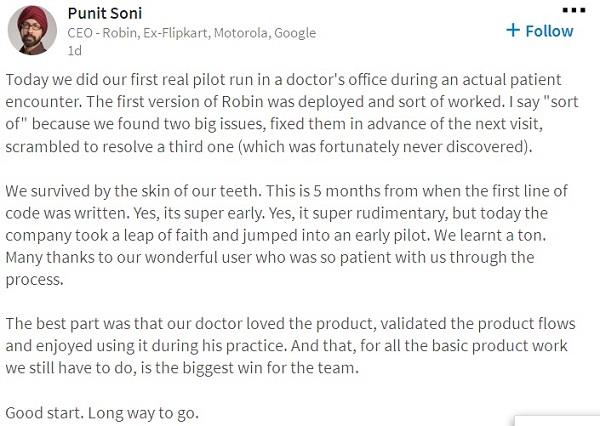 In an emailed response to Inc42, Punit told us, “We are building an AI for healthcare. A digital assistant that helps doctors take care of their patients better by offloading most of their administrative work and over time, assisting them on the clinical end.”

Robin intends to reinvent healthcare using cutting edge machine learning and conversational voice. Punit revealed that since Robin is in the pilot stage now, it is too early to tell when it will launch fully or what will be its monetisation model. He added, “It depends on customer response and the gap between where we are and need to be. Remember we are only 5 months into coding! So it’s early days.”

The team has now grown to 11 members and has Marc Benioff, senior Google leaders, Chamath Palihapitiya, founder and chief of Silicon Valley-based venture capital firm Social Capital along with some of the leading investors in the US backing it.

It was only a month ago, Punit had similarly disclosed details about Robin that it is a healthtech startup. Robin’s description states, “Robin™ marries cutting edge machine learning, always-on voice, and consumer design to create a healthcare-focused AI. In stealth mode.”

It was at that time that Punit had revealed that the startup will be a healthtech startup and changed the name from earlier publicised Learning Motors to Robin. 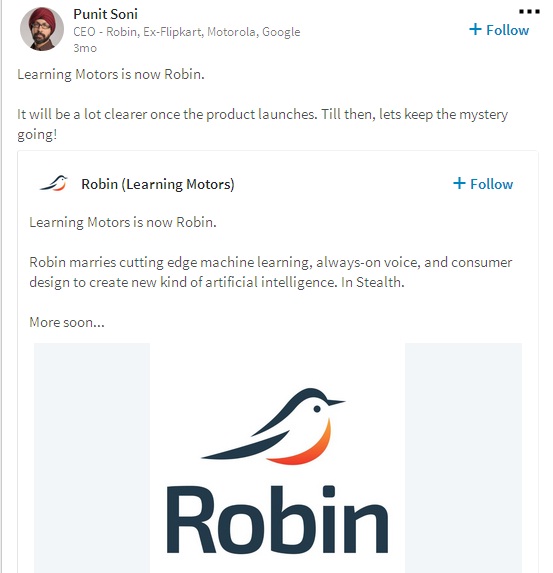 It was last year in November that he had revealed that he was planning to start a venture in the area of mobile and Internet. He wrote on LinkedIn ,“It turns out that naming the darn thing is almost as hard a job as figuring out the space we will operate in (more about that in due time). We will shortly put our first offer letters and with that, really start to exist. Founders may dream up things and lawyers may legally incorporate companies, but companies become real when the first team members show up. Now if only we could agree on a darn name.” The same month, he revealed that the startup has been named ‘Learning Motors’ and will be in the area of machine learning.

Soni, who had worked with Google in the past, returned to Silicon Valley after he quit the ecommerce firm Flipkart in April to work on his startup project. He is also an investor in the payment gateway firm Razorpay. Besides Razorpay, Punit has also invested in two Silicon Valley-based startups—HeadSpin, a testing platform for mobile apps, and Krypton, a mobile alternative service provider. Recently, he also invested an undisclosed amount in Indian coworking space Innov8.

AI And The Healthtech Space

When asked how AI can play a major role in healthtech, Punit told us,

“What is AI? It’s an often misused term. It’s a catch all phrase for everything from machine learning to voice interfaces. The greatest company in tech will be built in healthcare. It will sit on top of the largest repository of data and spend that we have in the world today. This will not be easy since it’s an overregulated sector which resists change. But it is inevitable.”

Punit added that AI tech will change everything from assistive clinical decision support systems to offloading administrative tasks to helping doctors with sorting out typical health issues which are repeatable leaving them to focus on more complex cases.

With Robin, Punit Soni is taking a deep dive in the difficult yet vast healthtech space. The global healthcare IT market is anticipated to reach $104.5 Bn by 2020, according to a new report by Grand View Research, Inc. In India, this month Bengaluru-based healthtech platform Mfine raised $1.5 Mn funding led by Stellaris Venture Partners. The healthtech startup offers patients access to online consultations and care programs from different hospitals. Mfine’s AI platform helps improve doctor productivity and quality of diagnosis. Similarly last month, healthtech IoT startup Doxper that digitises patient data on the go has raised $750K in a Seed round of funding led by Vidal Health and growx ventures. Other players in the space include Innovaccer,  Zoctr, Lybrate, and Tricog, trying to vie for the Indian healthcare market will rise to $280 Bn by 2020, from the current $100 Bn, as per a report by IBEF.