[Note: This article is part of The Junction Series. We will be covering the HealthTech and DeepTech sector in detail at The Junction 2017 in Jaipur. Learn more about The Junction here!]

This is a tried and tested adage, with the amount of innovation and ideation coming in from this august institution in the last few years. Maybe, the students at IIT are encouraged to cultivate ‘out-of-the-box thinking,’ maybe their motivation is highly internal and not driven by a fat pay package, whatever the reason, IIT breeds ideapreneurs.

Two such batchmates from IIT Kharagpur – Abhinav Shashank and Kanav Hasija – graduated together in 2010 and went on to pursue different paths back then. Abhinav worked at pharmaceutical giant Ingersoll with Sandeep Gupta while Kanav went to pursue his Masters at Boston University.

“I was working at Ingersoll for about three years, when I realised I wanted to do something more, something different with my life. And just around then, an international data analytics project was being conducted by Wharton and Harvard University at Philadelphia,” begins Abhinav. “I took a break from work and there Kanav was, also working on this same project.”

The project – a basic research of how large amounts of data (that which we call big data) can be studied, crunched, and analysed and the insights that can be derived from the same. “Because it was an important project and big data was relatively new, the project received a tonne of visibility. We were on NBC, MSNBC and a bunch of other networks. And this got other universities such as Standford, MIT and Harvard again to reach out to us in order to come up with more insights in different fields,” he adds.

The idea was fundamental – leverage big data and machine learning to derive particular insights in different areas of interest and research and give the output in product form. It was this basic idea that led to the formation of data analytics startup InnovAccer in 2012 by Abhinav, Kanav and Sandeep in Silicon Valley.

Narrowing Focus: From Researching Every Field To Finetuning Healthcare In The US

“You have to understand, the amount of data being generated today is immense. Be it social media or mainstream media or companies themselves, even smaller companies, data is everywhere. For everything. If you want to take a look at a sample set of say 10K companies you look at – patents, financials, funding, their overall performance, team strength etc. And all of this data is unstructured and has to be culled in from different sources onto a single place,” says Abhinav.

According to him, this data once culled, is impossible to manually analyse for reasons pertaining to error, time, bandwidth, and efficiency. “What big data does is collect all of this information, run it on large tech stacks and then the algorithm written by us will parse out this data to provide trends, predictions in a structured, consumable, and usable manner,” he adds.

As per Abhinav, this methodology was so successful that at the end of the first year the top 18 research institutions among top 65 had reached out to InnovAccer and given the team various projects to work on – in fields as varied as retail, real estate, movies and entertainment. The product, such as it was, being used across verticals and providing required outputs.

But the turning point for the startup came when an unnamed institution (top-tier) approached InnovAccer to create insights based on historic, clinical data of patients to identify trends that could lead to proactive prevention of chronic diseases such as diabetes, heart attacks, blood pressure etc.

“The US has extensive electronic medical records of patients, unlike India which is still lagging far behind in terms of historic data. Because of the initial amount of data available, all we had to do was collate it all, parse it and then derive trends for the present and future from the same. This was in aid of precision medicine,” shares Abhinav.

“The idea was – what if you could tell someone that their weight loss was a lifestyle problem, or that they should cut back on their sugar intake because they were at risk for hereditary diabetes?”

While the project was a success, the company then faced its next big problem – how to solve these kinds of problems at scale.

Datashop: Because Looking At Silos Does Not Help Derive Insights

“We were fortunate, I would say. In 2014, we started off with a $1 Mn seed funding led by Rajan Anandan and Capillary Technologies and the investment proved two things for us – proof of concept and enough capacity to build a product that could solve data-related problems at scale,” says Abhinav.

The company’s flagship product – Datashop or as Abhinav wryly calls it ‘Data ki dukaan’ – which is an umbrella platform to parse data. “Any company in the world in any industry has multiple processes and systems working for different functions – HR, Accounting, Communicating, Workflow etc. And these processes do not talk to each other, it is not their function. Then we have outside influencers such as mainstream and social media, financials of the company etc. We built about 20 connectors that would provide a 360 degree view of the organisation under one platform.”

As Abhinav says, if data is looked at in individual silos, it will make its own sense but you cannot make trend predictions or figure out insights. It is not helpful to have data existing in silos.

When it comes to healthcare, Abhinav claims that the company looks at factors such as patients’ clinical data, hospital operation processes, and insurance claims. The way healthcare works in the US is this – a number of hospitals offering various specialties come under a healthcare network (private and government-funded) in a particular area, are also connected to a particular insurance provider for faster claims-processing.

“Healthcare in the US is hellishly expensive, running into thousands of dollars if you’re not insured. So claims became a very big part of the way the platform utilises data. Also, the traditional ‘gut feel’ method of going to a particular doctor, or choosing a particular kind of medicine for treatable ailments is inefficient and counterintuitive.”

According to the founder, this legacy way of working can now be manipulated and changed by combining existing data across factors to help quantify patient, medical outcomes and insights for hospitals and statewide networks. 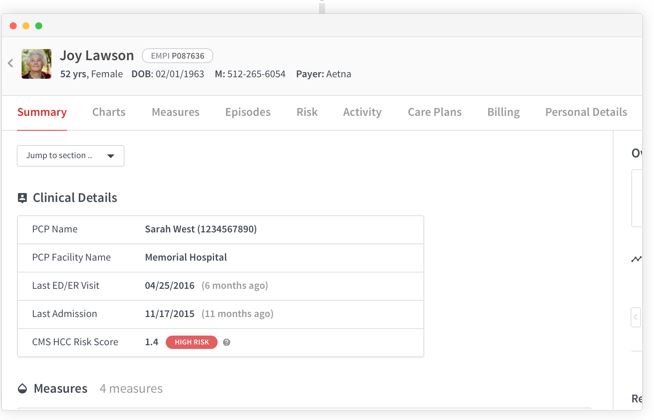 “We Provide The Lens So Doctors, Hospitals Can See The Healthcare Highway Clearly”

“A doctor and the healthcare system are driving each other and modern medicine forward. We just provide the lens so they can see clearly,” says Abhinav.

How InnovAccer does this is through the following ways.

It tries to improve the outcomes of disease metrics and patient prevention through large sample sizes of population. It tries to improve and predicate doctor efficiencies in order to ensure optimum patient care within a given hospital, or network of hospitals.

“As you know heart attacks go undiagnosed in the first thirty minutes of a patient showing symptoms and getting the medicine right in those first few minutes is crucial to saving the patient’s quality of life. Also, heart attacks among other ailments, cost about $500K to be treated. We want to look for ways to bring this cost down.”

“We try to provide intervention insights provided by data that can lead to better care outcomes and bring down the cost of said healthcare leading to more affordable healthcare for everyone,” he adds.

“We spent a lot of time and our seed money in trying to get the product right, because the market already existed for it. So we officially launched the product only in 2015 after figuring out what our product and platform could be,” says Abhinav.

As per Abhinav, their first big client was one of the largest healthcare networks in Iowa who wanted InnovAccer to provide insights on the entire state. This was when the team achieved business traction. The project with Iowa healthcare was succeeded by two networks in New York wanting to have InnovAccer onboard and then Texas, California and Nebraska. “At the moment we have 600-700 clinics and hospitals on-boarded on the InnovAccer platform,” shares Abhinav.

The pricing model for the startup is based on the number of patients it is able to delve into and provide insights for, so the growth metric for the company also stems from the same. . It claims to have about 1.7 Mn to 2 Mn patients already registered on the platform. “We established PMF with Iowa, but our true growth started happening when all the other networks came to us and we started growing at about 300%-400% Y-o-Y,” says Abhinav.

It was also in August 2016, that it raised a Series A round of $15.6 Mn from Westbridge Capital, with the MD Sumir Chadha joining the company’s board too. According to the founder, and the new funds too helped the company in growing rapidly, because the team could expand to 100 people sitting in Delhi while the core team of 20 operated from the HQ – San Francisco.

“Our main aim is patient care. For that we need to have more patients come onboard and get 10 Mn patients by the end of the year. And broadly speaking, we want to reach about 100 Mn patients in the next three years. We know that we can only improve healthcare by improving outcomes and that can only be accomplished by working with as many healthcare networks as we can. It’s weird. But when we started off, it was just about the academics of it all. We didn’t think of running a business at all,” says Abhinav with a smile.

But InnovAccer is a business and every business faces competition, either from peers or legacy businesses. It does not exactly fall under a traditional, healthtech, problem-solving startup, as its product is less tangible and more academic.

“We would say our competitors are businesses and products such as IBM Watson (the super computer), Healthcatalyst and Palantir. These are all billion dollar companies. But our technology prowess is unmatched as we are using tech that Facebook uses – Hadoop and Spark. Our product and team is rivaling the best in the word and we are building out cutting edge tech. I’d say, we are not only competing against these giants but winning as our growth is still happening,” he says.

For a nascent company that is just starting out on its ambitious journey of solving a pain point that exists practically, in every country in the world, standing at the cutting edge of technology seems to be the right motivation.

The use case for analytics is increasing with every year, and an industry that was considered to come under the domain of the KPO vertical has gained importance in its own right. Data is king in the twenty first century, and nowhere is this adage more appropriate than in the way healthcare has been democratised and, to a certain extent, commercialised.

With products such as IBM Watson and Datashop trying to fulfill the pain point of intervention insights and precision medicine, the day isn’t far when technology truly prolongs the human quality of life, along with providing necessary healthcare.

So far, InnovAccer has tasted success, both by being lean and cautious while proving PMF and raising funds, and also by grasping the fundamental issue that needs resolution. But with competition from established players such as Palantir and newer tykes entering the vertical, how it will maintain pace and scale remains to be seen.