During the TMS 2022, Munjal said that M&A is a bad strategy when dealing with strategic inflection points when he was questioned about Unacademy’s recent acquisitions

During the live session on Day 2 of The Makers’ Summit 2022, as Unacademy’s Munjal opined that M&A is a bad strategy when dealing with strategic inflection points, he was questioned about edtech giant’s recent acquisitions in the last couple of months.

Answering about Unacademy’s acquisitions, Munjal said that the startup acquires other companies for avenues and not revenues. He added that the acquisitions are mostly in line with the company’s vision to build teams.

He cleared the air on ‘mergers and acquisitions to navigate strategic inflection points’ by stating that big revenue M&As – the likes where a company acquires another company that has 20%-plus revenue – are not the right strategy and not small M&As for teams, engineers or in the case of Unacademy for ‘teachers’.

In 2010, Gaurav Munjal started Unacademy as a YouTube channel. Five years later, the startup was officially registered as a Bengaluru-based edtech and it started by offering free lessons on test prep topics.

Today, the edtech unicorn claims to have more than 50,000 registered educators and over 62 Mn learners. It offers classes in 14 languages across 5,000 cities and offers preparation material for several professional and educational entrance exams in the form of live classes both free and via subscription. 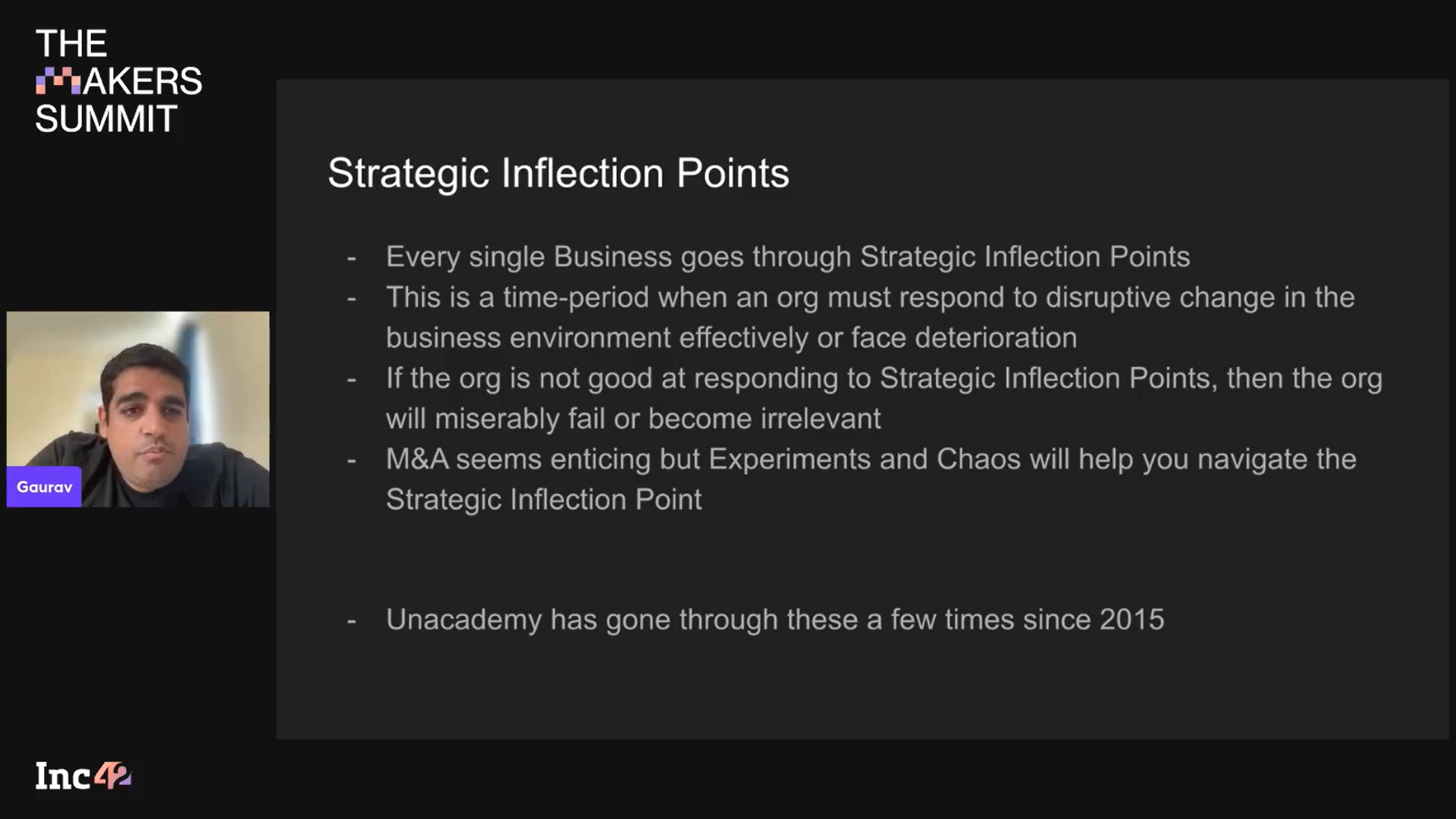 He further talked about the strategic inflection points that the startup faced, including the en masse outflow of educators from its platform to traditional coaching institutes in 2018. That was the point when the startup worked on its monetisation aspect to retain teachers.

During the session, Munjal said, “Every time your business goes through a strategic inflection point, [for example] where there is a new technology, either you can do M&As that is, you can start acquiring big companies, you can be on the front page of the newspaper every day, or you can do experiments and chaos and figure out what works for you.”

He further added that M&A is not the right strategy, since the acquired companies will also go through strategic inflection points at some point, and ‘it will be a house of crunch’.

The House Of Unacademy

Unacademy is backed by major VCs and private investors including General Atlantic, Facebook, Nexus Ventures, Blume Ventures, and Flipkart CEO Kalyan Krishnamurthy. The edtech unicorn had last raised $440 Mn in Series H funding at a valuation of $3.4 Bn in August 2021.

The Unacademy app and website offer test prep material for IIT-JEE, UPSC, SSC, NEET and GATE, among others. Unacademy has also taken its test prep approach outside India to launch medical test prep in the US. In 2021, it launched Relevel, a new gamified product to enable job-seekers to showcase their skills and get employed at some of India’s largest startups.

The startup also has a third branch, Graphy, that allows content creators to grow their audience, monetise their skills, and host live cohort-based courses. It recently also launched Unacademy Stores, where users will be able to have a walk-in experience via demos i.e how Unacademy teaches and students, as well as parents, will get counselling sessions.

The entrance exams-focussed learning platform has been aggressively building its presence across new categories and exploring international expansion – on which the teams of acquired startups are working.