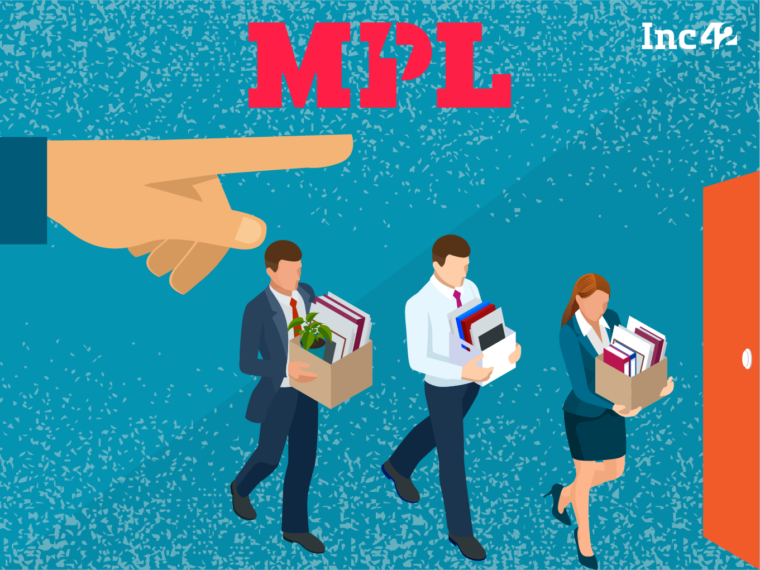 MPL is also shutting down its streaming service; most of the layoffs have happened in the streaming vertical

The layoffs come eight months after it raised $150 Mn, entering the unicorn club

Bengaluru-based esports and mobile gaming unicorn Mobile Premier League (MPL) is laying off 100 people from various verticals, representing about 10% of its total workforce.

The company is also making an exit from the Indonesian market and shutting down the streaming service on its app. MPL confirmed the development to Inc42 and said that most of the layoffs will happen in the streaming vertical.

The employees will receive complete severance packages along with other extended benefits.

MPL acquired streaming platform GamingMonk in April 2021. As part of the transaction, MPL absorbed the complete GamingMonk team. It seems that most of the GamingMonk team has been laid off, slightly over a year after the deal went through.

In an email cited by Moneycontrol, MPL cofounders Sai Srinivas and Shubh Malhotra told employees, “The last few months have been insane. The philosophy of growth at all costs is now reversed. The market is now rewarding profitable growth over growth at all costs.”

“It is time to make the difficult decision to redeploy our resources in other parts of our business to ensure our long-term health and success as a company,” they said in the email.

The cofounders also explained the rationale for exiting Indonesia in the email. According to them, Mobile Premier League is seeing a return profile that is only a fraction of what they were expecting, despite investing deeply in the Indonesian operations.

The layoffs come eight months after MPL raised $150 Mn in a funding round that marked its entry into India’s unicorn club.

Founded in 2018 by Srinivas, Kiran G, and Malhotra, MPL is an esports and skill gaming platform. It offers over 70 games across categories such as daily fantasy sports, quizzing, board games, esports, and casual games on its mobile app. The startup caters to more than 90 Mn users across India and the US.

Recently, MPL ventured into game publishing with the launch of Mayhem Studios and the entry into the US and Europe markets.

According to the email sent by the cofounders, the gaming unicorn will focus on achieving EBITDA neutrality, while focusing on the aforementioned markets.

The mobile gaming segment received a boost with the onset of the Covid-19 pandemic as lockdowns forced people to stay at home which resulted in an increase in total game downloads.

With the latest development, MPL has joined the growing list of Indian tech startups which have laid off employees in 2022 amidst a funding winter. According to Inc42’s Startup Layoff Tracker, 14 Indian startups have laid off 8,499 employees (excluding MPL).

Earlier on Monday (May 30), Inc42 exclusively reported that non-academic upskilling startup FrontRow has laid off 145 employees.