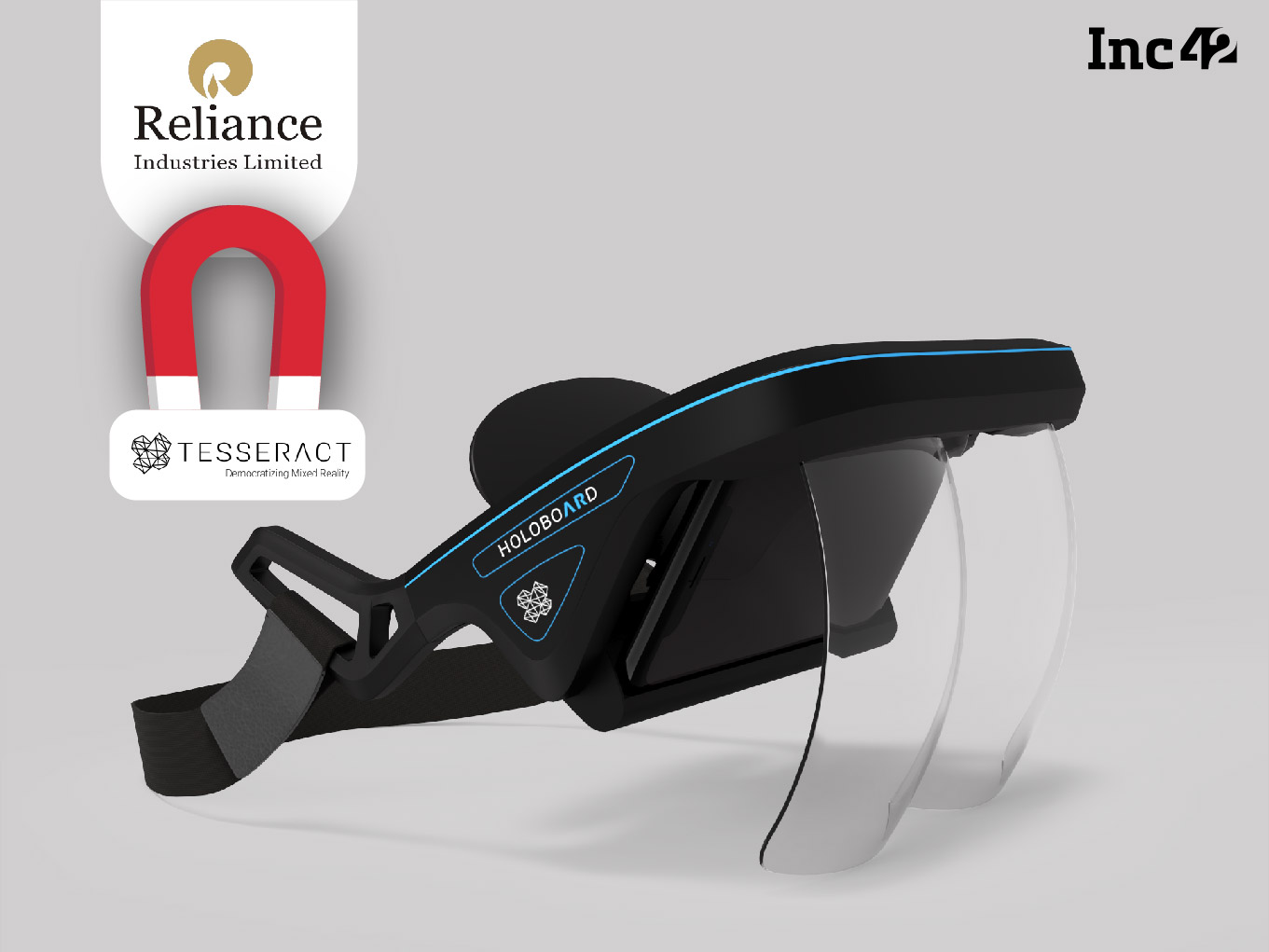 It also invested INR 10.25 Cr in the company according to MCA filings

At its 42nd Annual General Meeting, Reliance announced a slew of ambitious projects built around its Jio GigaFiber offering and wooed Indian startups with its partnership with Microsoft Azure for cloud services. Reliance also announced its mixed reality (MR) platform Holoboard, which combines augmented reality and virtual reality. Interestingly, the device is developed by Mumbai-based VR startup Tesseract, and Reliance announced an investment in the company. Turns out, the investment is actually an acquisition as Reliance has acquired a majority stake in Tesseract.

Talking to Inc42, Kshitij Marwah, founder and CEO, Tesseract said that Reliance has invested in the company picking up a majority stake. Post-acquisition, Tesseract will continue to work independently, he added.

While Marwah did not disclose the terms of the deal, a source close to the company told Inc42 that Reliance would acquire a stake of 80-85% post the deal. Tesseract would be valued between INR 150 Cr and INR 500 Cr, the source added.

Contrary to the source, Ministry of Corporate Affairs filings accessed by Inc42 showed that Reliance Industrial Investments picked up 92.7% stake in Tesseract in May, according to a beneficial interest (BEN-2) declaration filed on May 8, 2019. “We acquired a 92.7% of the shareholding of your company on 7th May, 2019 and accordingly, your company became a subsidiary with effect from the said date,” the filing said. The BEN-2 document was signed by Anshu Agarwal, company secretary, Reliance Industrial Investments and Holdings Ltc.

The details show that the investment of INR 10.25 Cr was also made in the same month, however, the full value of the transaction couldn’t be ascertained at the time of publishing.

Founded in 2015 by Kshitij Marwah, Tesseract is a deeptech startup and has launched three hardware and two software products in the MR, AR, and VR spaces. On the AR side, the company is focused more on “content consumption” while in VR, it concentrates on “content capture”.

The company also came to spotlight at the Reliance AGM presentation, when Akash and Isha Ambani underlined three use cases, namely shopping, education, and entertainment for the MR platform. “The use of MR in education will increase the level of engagement and understanding in students and can be applied to all disciplines,” said Akash Ambani while presenting an MR-based educational project running through the Jio Set Top Box.

Further, RIL President Kiran Thomas had announced the investment in Tesseract. Further, for the Jio Cinema app’s movie screening on MR headsets, Tesseract has developed the Jio HoloBoard as a native MR headset. While specifics about the Jio HoloBoard are yet to be revealed, Reliance Jio wants to make the headset available for purchase in the market very soon at an “extremely affordable price”.

Tesseract’s Holoboard is indeed priced competitively at $149 (INR 10.8K), $249 (INR 18K), and $349 (INR 25K) for the Basic, Premium, and Enterprise editions, respectively. Compare this with Microsoft’s Hololens, which comes at a steep $3,000 while the Google Glass Enterprise Edition is priced at $1,892, and has even limited use cases. Other options such as HTC Vive or Oculus are priced similar to Holoboard.

Reliance’s acquisition of Tesseract is in line with its recent startup acquisition. Over the last few months, Reliance has acquired:

According to The State Of The Indian Startup Ecosystem 2018 report by Inc42, noted that so far the deeptech segment has seen 74 shutdowns, most of them due to a dearth of funding.

In a 2019 analysis, DataLabs by Inc42 noted that slow growth of India’s deeptech sector is primarily due to the lack of monitoring and regulation, which leads to poor or failed execution of the government schemes. Some of the other reasons include lack of high-skilled workforce, low-level readiness of the Indian public towards technology and more.

As Reliance continues its match to become the kingpin of the Indian economy, its acquisition of Tesseract opens up new growth strategies for the flagging deeptech startup ecosystem in the country.