Tesseract has launched three hardware products in the MR, AR, and VR sectors combined, targeted at both consumers and enterprises

The MR space provides a lot of opportunities in India, but there are a lot of entry barriers, says the founder

If you’re a fan of Marvel’s Iron Man, you’re sure to have been impressed (like me) by how Robert Downey Jr in his act as Tony Stark uses “mixed reality” to find clues of villains plotting to destroy the earth, fashionably swiping, pinching, pushing and pulling things on a 3D holographic computer interface.

Well, sorry to disappoint all you Marvel fans and tech geeks out there, but the way Marvel projects technologies such as mixed reality, augmented reality, and virtual reality in its sci-fi movies is way overhyped — for the moment at least.

While we may be able to interact with technology the way Stark does someday in future, the reality is that mixed reality as a technology is just starting to take off.

But what is mixed reality? Mixed reality or MR combines elements of augmented reality, which adds digital elements to the real world, and virtual reality, a virtually immersive experience that shuts out the physical world. In an increasingly technology-anchored world, MR, AR, and VR are changing the way we communicate, connect with people, work, play, and interact with the digital world, by making us feel that we’re right in the middle of the virtual or augmented reality.

In the last few years, VR has gone mainstream with companies offering VR-enabled headsets such as  HTC Vive ($970), Oculus Rift ($599), Samsung Gear VR ($129), and Sony’s PlayStation VR ($582). AR, however, is still on the cusp of breaking out and changing how real-world and digital objects interact. Microsoft, Google and others have been working to bring AR to consumers in the form of eyeglasses.

“You may hear of these products coming out of Silicon Valley, US, Europe, China, but you don’t hear stories of such AR products coming from India,” says Kshitij Marwah, the founder of the Delhi-based deeptech startup Tesseract.

“If you look at the field of augmented reality, most companies that exist in India create content and deploy it in a specific set of AR/VR hardware, which costs over $2,000,” he adds.

In July, Tesseract introduced what is being touted as the first made-in-India AR headset — Holoboard, and works with smartphones. Users of AR headsets can see digital and virtual images in the real world around them.

Marwah believes that it is important to democratise the mixed reality space by bringing down the price point and making it accessible to consumers. “It’s such a fast-moving space that you don’t know what new technology may exist in a few months. India is a big market, but the startups here are focussed only on content,” he says. 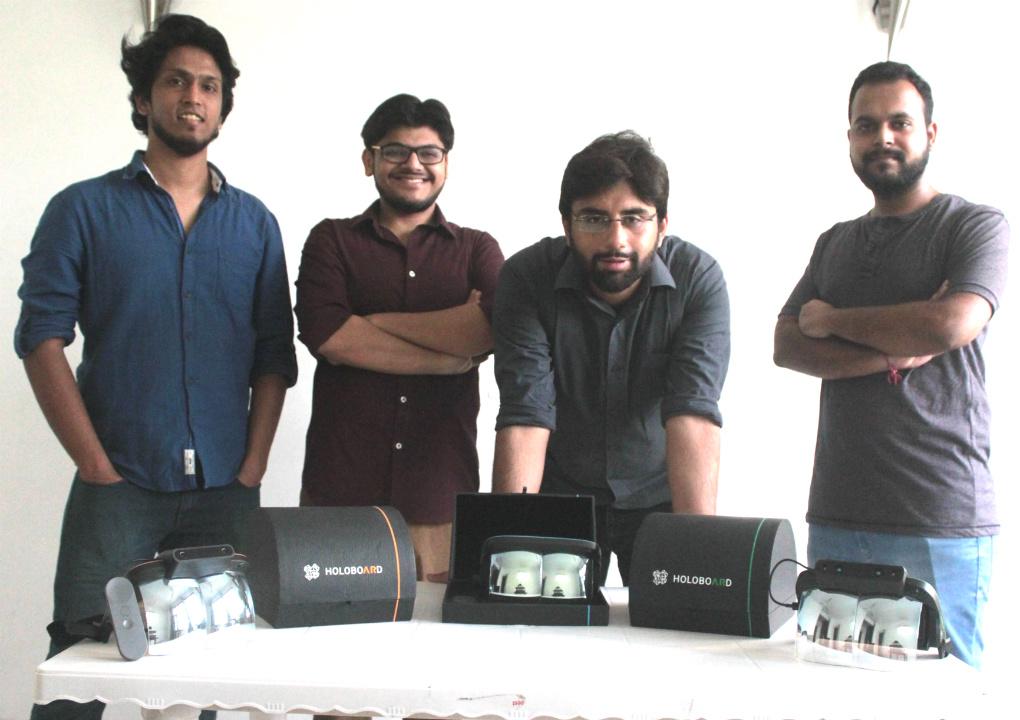 Marwah was studying at Massachusetts Institute of Technology (MIT) in the US when the idea of Tesseract came to him. It was a result of his work in AR and VR as part of university’s Media Lab, which counts innovations such as Amazon Kindle, Lego Mindstorm, one laptop per child (OLPC), etc. Marwah was running the MIT Media Lab India programme, aimed at introducing self-organised design-led innovation in the country’s grassroots.

In geometry, the tesseract is the four-dimensional analogue of the cube; the tesseract is to the cube as the cube is to the square. In Marvel Comics, the Tesseract (also called the Cube) is a crystalline cube-shaped containment vessel for the Space Stone, one of the six Infinity Stones that predate the universe and possess unlimited energy.

Here’s a scene of The Avengers arguing in front of the Tesseract:

“The MR space provides a lot of opportunities in India, but there are a lot of entry barriers. So the question arises, how do you democratise MR-based content creation and consumption to ensure access to the masses? That’s the vision we started with at first,” says Marwah.

Since its inception in 2015, Tesseract has launched three hardware and two software products in the MR, AR, and VR sectors — Methane, Holoboard, and Quark. The founder claims to have seven patents: one US, three international (130 countries), and three India patents.

“Everything we do works around smartphones so as to democratise mixed reality,” says Marwah.

So how does a startup like Tesseract keep costs down and achieve the right product-market fit while launching MR products in India? “All you need to figure out is who wants your product and at what price point will you be selling it. In a country like ours, people rarely use such products. Even after pulling off the product technologically, you don’t know whether it will work in the market or not,” says Marwah.

Tesseract’s offers its hardware solution in two different domains — AR and VR. On the AR side, the company is focussed more on “content consumption” while in VR, it concentrates on “content capture”. Tesseract’s product are available for both the consumer and enterprise segments. Here’s how:

Why Choose AR Over VR?

According to Marwah, AR has three definite advantages over VR. One, it doesn’t isolate you unlike VR, which shuts out the physical world; two, it has no side effects — VR can give users motion sickness because of which they can’t wear VR headsets for long periods of time; and three, the applications of AR are much broader than VR, and range from manufacturing to healthcare, logistics to education.

“AR can improve productivity by 30-40% in various sectors. For instance, in healthcare, surgical error rates are reduced to 10 and to even 0% in certain cases,” Marwah says.

Virtual reality, on the other hand, provides a complete 360-degree immersive view of the world around you. You can capture VR content and use it in VR headsets, which is the first point of contact. The other is that you can share it in social media and people can explore everything around you as well.

“But, people generally miss the third: using VR content, you can also create 2D content, which is impossible using a normal smartphones or SLR cameras. That is a part we felt was missing,” Marwah says.

All startups face challenges in their journeys. And because of the advanced technology domain it works in, the challenges were all that much more for Tesseract. Marwah says the startup faced quite a few problems, starting with finding the key people to support the innovation, as many aren’t aware of the technology.

Other challenges were finding partners for manufacturing and building relationships with manufacturers and investors. Starters are not in a position to place big orders to manufacturers while developing a prototype. But low-volume manufacturing is difficult as very few companies work on such orders. Tesseract has tie-ups with Tier 3 and Tier 4 manufacturing companies.

Marwah also faced a tough time explaining to manufacturers and investors what and why they were developing. “Many companies come and say to us, ‘we can’t do this, we don’t have the right processes to make,’ but you have to still work with them,” says Marwah.

One of the biggest learnings Tesseract had in the post-prototype phase was that for the kind of products it produces, one has to capture a big market. “This learning came after we faced a bottleneck selling Methane, as the market was limited,” he add.

It has just been two months since Tesseract launched Holoboard and Quark. Within a quarter, the startup plans to expand geographically, based on its sales, funding strategies, etc.

Tesseract, which has remained largely bootstrapped, is currently looking for investors who understand the mixed reality space and who also understand deeptech. It plans to raise anywhere between $3-5 Mn, Marwah says.

Revealing the sales Tesseract has registered for Methane, Holoboard, and Quark, Marwah maintains that the startup has generated revenue of about $200K from Methane; 2,000 Holoboard headsets are under shipment and he expects to make a couple of crores in INR out of them. The company will rake in revenues of about $207K (INR 1.5 Cr) from 1,000 Quark cameras.

India is at the nascent stage when it comes to adoption of AR and VR technologies. January 2018 report of GrowthEnabler estimates Indian AR/VR market to grow at a compound annual growth rate (CAGR) of 76% over the next five years, and 60% of 170 startups in this field to be set up in the past two years.

The report further estimates that there are close to 1,500 startups in the AR/VR segment worldwide, with the US accounting for nearly 45%, followed by the UK, Israel and Canada. The AR segment received $2.5 Bn in funding, and VR $2.7 Bn from 2013 to 2017 globally. Whereas, in India, of the 100 AR startups, only 5% is estimated to have received any form of capital investment of $1-1.5 Mn, report says.

At present, Tesseract is eyeing the smart glass market and looking to democratise that as well. “It’s like a Google Glass, but will come at one-tenth price of Google Glass,” says Marwah. The startup is also working on 3D VR experiences.

“On the AR side, we want to work in its form-factor (or sizes) we want to convert AR glasses into normal glasses,” Marwah says, about the startup’s future plan.

The startup has already introduced Holoboard and Quark in India, and hopes to enter Western markets soon, along with making these products available on Amazon as well. “India is actually the last country (as a market for AR products) to be frank. Countries like Japan, Korea, Europe, Australia, and North America are the bigger markets. We sold Methane products in some of these countries,” says Marwah.

During Inc42’s interaction with Marwah, I got a chance to try Tesseract’s Holoboard. It gave me a sense of being in a place, a different real world rather than an entirely make-believe one. It has a little circle that moves with the movement of your head, and with the remote controller I could select to play YouTube videos, see Images and other contents in the 90 degrees wide screen. I also feel that there’s plenty of room for Tesseract to make the graphics clearer and less choppy and stabilise the content visualisation. But it’s a good product for any who wishes to experience augmented reality at a price just at $149.

And hopefully, it will democratise mixed reality.