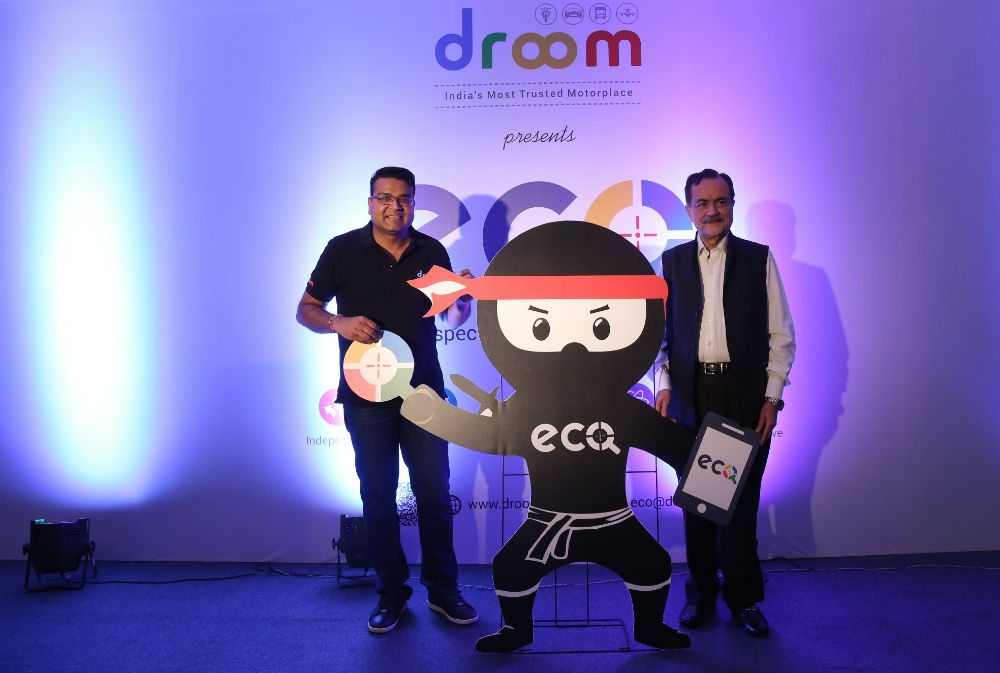 The app was launched in association with Carnation Auto and is aimed at improving the transparency and authenticity of automobile checks, and thereby increasing buyer’s confidence before buying a used car.

Droom was founded in 2014 by former Shopclues CEO Sandeep Aggarwal. It allows users to buy and sell used and new automobiles.

On the other hand, Carnation Auto is an initiative by Maruti Suzuki’s former CEO Jagdish Khattar and was launched in 2008. It is a multi-brand automobile sales and service network. It has serviced over 8.5 lakh vehicles, sold over 18,000 cars, and has carried out over 100,000 vehicle inspections.

The Idea And The Need

Talking about the need to introduce the product in the market, Sandeep Agarwal, CEO and founder of Droom said, “Unlike US, Western Europe and Japan, India is low trust market in general and buyers for used automobiles suffer from information asymmetry and moral hazard.” According to him, buying an used automobile is full of hassles. With Eco’s scientific and comprehensive inspection module, the problem will be mitigated and will induce buyer confidence.

The Droom team started working on the idea in August 2015. Under the soft launch phase of the app, Droom has completed close to 100 inspections, and claims to have received positive feedbacks from the users.

The trained technicians registered on the platform are referred a Eco Ninjas. The Eco Ninja then visits the inspection site and performs a check on the vehicle based on an exhaustive list of questions.

There are close to 120 inspection points divided in six categories including insurance, physical condition of the vehicle, etc. The app also constitutes sections to upload mandatory images of the vehicle being inspected.

Based on these responses, a weighted average score is provided to the vehicle on a scale of 10. The technician can generate a report that includes repair estimates and top features of the vehicle among other things. Buyer can use this report to make a purchase decision.

The charges for two-wheeler inspection are approximately INR 200 and INR 500 for a car. The team took a conscious step to keep the price affordable. For every inspection, Droom will make 12% and Eco’s licensing fee is 3%. In total, Droom will take away 15% from every completed inspection.

Currently, the Eco app services are available in 6 cities – Delhi, Mumbai, Bangalore, Chennai, Pune, and Hyderabad. Droom is also targeting a total conversion of up to 25% inspection out of the total listing of vehicular sales on Droom.

The registration process for a technician is pretty simple, requires basic understanding of English and a smartphone. Once a technician becomes an Eco Ninja, he stands a chance to earn up to INR 30,00 per month. However, the app makers agree that English language may prove to be a challenge for on-boarding a high number of mechanics. Therefore, the company may include two to three vernacular languages in future based on user feedback.

Eco’s partnership with Carnation is complimentary, as it will enable Eco users’ an access to Carnation’s extensive network of workshops and skilled technicians. Carnations technicians in over 36 cities will now use the Eco app for carrying out the vehicle inspections.

The Droom team is also working on formulating a Car history repository called Droom History, which will be similar to US-based CARFAX.

Prior to this, Droom recorded sales worth INR 13 Cr. in June, 2015. In July, 2015 Droom raised about $16 Mn in a funding round led by Mumbai-based LightBox Ventures & Japanese internet firm Beenos. In September 2015, Droom launched Quicksell, India’s first C2B (Consumer to Business) marketplace.

Droom currently has over 41,000 B2C sellers, over 125,000 listings on its platform, and has a listed GMV of INR 1500 Cr. It faces indirect competition from companies like OLX, Quikr, Carwale, Cardekho.com, Spinny, and Zoomo.