The round was led by Coinbase Ventures and Andreessen Horowitz (A16Z), marking the latter’s first investment in India

CoinSwitch is the second Indian crypto startup entering the unicorn after CoinDCX, which also raised a Series C round from B Capital Group as well as Coinbase Ventures

The funds will be used for the expansion of asset classes, team, userbase, ecosystem fund and education material, cofounder Ashish Singhal told Inc42 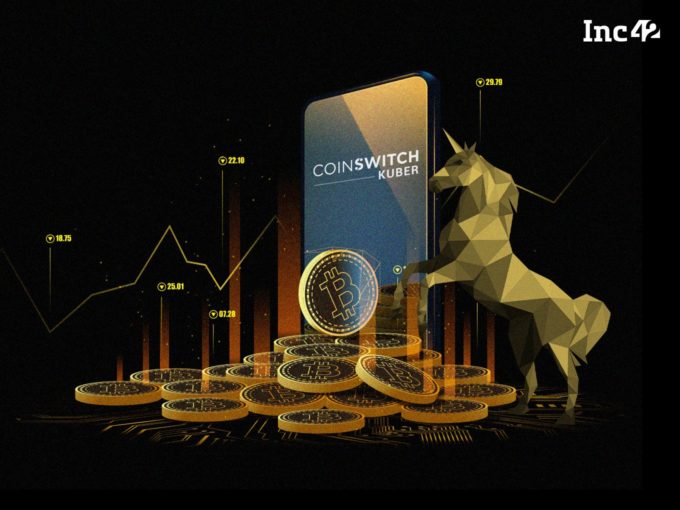 Only a day after Bengaluru-based meat startup Licious joined the unicorn ($1 Bn+ valuation) club, CoinSwitch Kuber has announced the close of its Series C round at $260 Mn at $1.9 Bn valuation, making it the 29th unicorn in 2021, and 71st Indian startup to enter the unicorn club.

The round was led by Coinbase Ventures and Andreessen Horowitz (a16z), marking a16z’s first investment in India. Existing investors Paradigm, Ribbit Capital, Sequoia Capital India and Tiger Global also participated in the round.

CoinSwitch will use the funds for the addition of stable asset classes such as stocks and gold.

“Most of our users are usually below the age of 28, haven’t really invested in other asset classes apart from crypto before this. As they grow with us, we believe they will want to diversify their portfolio in less volatile products, and perhaps want to move onto a different platform,” Ashish Singhal, cofounder & CEO, CoinSwitch Kuber told Inc42.

“To prevent that, using the same user experience that we provide on crypto trading, we want to help our users diversify their portfolio when their risk appetite lessens,” he added.

The crypto unicorn will spend some part of the recent fundraise for launching new crypto products and services such as lending and staking as it eyes expansion to 50 Mn users by FY22.

The startup will also focus on onboarding institutional clients, hiring across engineering, product, data, and growth roles, and launching an ecosystem fund to form a strategic partnership with crypto startups.

“We also plan to launch awareness and education courses in partnership with universities and colleges,” Singhal said.

In a fireside chat at The Crypto Summit by Inc42 Plus, Singhal had also stated that crypto investments on CoinSwitch were also coming from small-town India with 60% users coming from Tier 2 and 3 cities — a mobile-first generation.

CoinSwitch Kuber has last raised $25 Mn in a Series B funding round from Tiger Global Management in April 2021, before which it has raised $15 Mn in Series A round. With the latest round, CoinSwitch Kuber’s total funds raised stand at $300 Mn.

A Look At Skyrocketing Crypto Users & Transactions In India

Besides CoinSwitch Kuber, other Indian crypto exchanges such as WazirX and CoinDCX have also witnessed a surge in trading volumes and user signups since last year, as Indian millennials grew fonder of cryptocurrencies as an investment option.

Binance-owned WazirX in May had reported that it witnessed a 10X growth in five months when it processed transactions worth $5.4 Bn, up from $500 Mn in December 2020.

Seeing the rise in demand, several foreign crypto exchange platforms are trying to enter India. In August, US-headquartered digital currency exchange CrossTower announced the launch of its crypto trading platform in India. In September, Belfrics Group had resumed its crypto exchange operations in India by investing $15 Mn in the country.

The Indian cryptocurrency market was ranked 11th out of 154 nations in terms of crypto adoption and 6th in terms of DeFi (Decentralised Finance) by Blockchain data platform Chainalysis. The crypto market in India has further grown from $923 Mn in April 2020 to a staggering $6.6 Bn in May 2021.

A more recent report suggests that from June 2020 to July 2021, India’s crypto market grew by 641%. It added that large institutional-sized transfers above $10 Mn worth of cryptocurrency represent 42% of transactions sent from India-based addresses, suggesting that India’s cryptocurrency investors are part of larger, more sophisticated organisations.

Cryptocurrencies As A Regulated Commodity: A Long Way To Go

Despite the numbers showing an increased adoption, Indians own less than 1% of the world’s Bitcoin to date.

This can be attributed to rigid crypto regulations within the country, hindering large-scale investments in these virtual assets. Talks are rife regarding regulatory scrutiny, but there has been no clear framework in place to implement the same.

For instance, it was reported in May 2021 that the Indian government might form a new panel of experts for creating a regulatory road map involving crypto and blockchain usage, and now, the government is in the process of formulation of the new cryptocurrency Bill.

The RBI is also set to launch its first digital currency trial programmes by the end of the year, according to its governor Shaktikanta Das.

Further, the finance ministry is reportedly monitoring people’s growing interest in crypto and the rising crypto trading activities while gauging supervisory options. Reports also said that a committee within the finance ministry will examine the scope of taxation of cryptocurrencies — if the income from trading in cryptocurrencies can be taxed as capital gains or a new category should be created.

But the path has not been defined yet either by the government or other regulatory bodies.

In essence, the crypto industry has a lot more potential to flourish across the country if its pain points can be resolved fast, paving the path for a robust, decentralised financial ecosystem.