According to Linkedin, blockchain and artificial intelligence (AI) are the emerging job skills in India 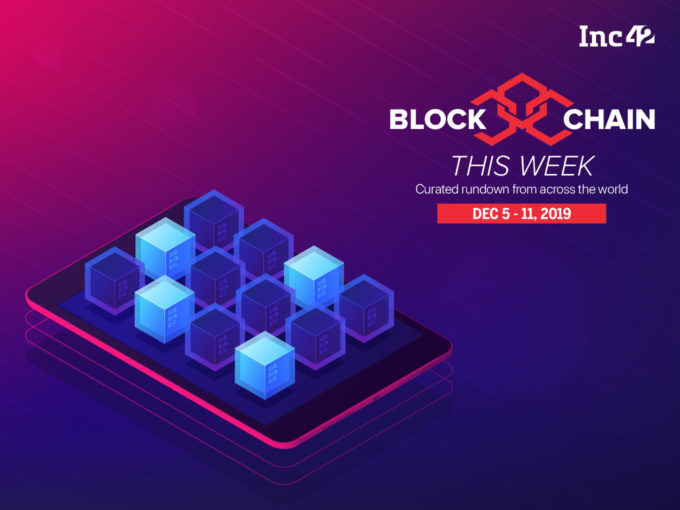 Blockchain technology is currently disrupting every possible sector in India and it’s one of the most high-demand technologies in the job market as well. As per NASSCOM Avasant India Blockchain Report 2019, in terms of blockchain patents in the world, India is now ranked sixth. Almost 50% of Indian states have expressed their enthusiasm towards blockchain adoption. Today, the technology has forayed into every sector possible, including public sector, BFSI, healthcare, governance, and energy among others.

According to a report titled ‘Blockchain In Insurance Market Size and Forecast to 2026, Breakdown Data by Manufacturers, Key Regions, Types and Application,’ it predicted the scope of the market, opportunities, restraints and challenges that exist in the insurance industry. The blockchain in the insurance market is expected to grow at a significant rate in the coming years.

Graph Of The Week:

It’s a fallacy that blockchain is only applicable for cryptocurrencies. As shown in this graph, the potential applications for blockchain extend across sectors and operations.

Here are the biggest blockchain-related headlines from India and the world.

Blockchain, AI And JavaScript Are The Top Emerging Jobs In India

Blockchain has moved rapidly up. It did not figure in last year’s report, which was led by machine learning engineer, application development analyst, and back-end developer. While most of the emerging jobs in the latest report are tech-led, other roles such as digital marketing specialist and lead generation specialist have also seen significant rise compared to a year ago.

LinkedIn defines emerging jobs as roles that have seen great demand in a region. While there may not be a large talent pool who hold these jobs, there is a large year-over-year growth of professionals who are hired into these roles, showing the likely demand in the future.

RBI Could Launch India’s Own Cryptocurrency

The Reserve Bank of India (RBI) is likely to develop an official cryptocurrency in India. Shaktikanta Das, the governor of RBI also said that the cryptocurrency issuance is a sovereign mandate and will not be handed over to a private company, as there is huge risk around money laundering.

Internally, RBI has held several meetings and discussions with the public banks to potentially launch India’s own cryptocurrency. However, Das said that ‘it’s too early’ to launch the cryptocurrency in India, as the technology is still in the nascent stage at the moment.

New-York Based blockchain company ConsenSys has shut shop in India and the Philippines. It has laid-off more than eleven employees working at both these offices. ConsenSys said that the decision comes as a strategic move to realign sales and services team in both these countries.

However, this is not the first time that the company has taken such a decision. Last year, the company let go of 13% of its employees, where the total headcount dropped to 1K employees. In India, the company was engaged in developing various decentralised projects in healthcare, land titling, education and other areas. However, the fate of all its Indian projects remains unclear at this very moment.

The Twitter CEO Jack Dorsey recently in a Twitter post announced that the company is looking at funding a small team of up to five open source architects, engineers, and designers to develop an open and decentralised standard for social media by leveraging blockchain technology. Twitter calls this project ‘Bluesky’.

It will be headed by Twitter CTO Parag Agarwal, who will be in charge of hiring a lead for the research team. Currently, in an ideation stage, Dorsey said that the project would take many years to complete. Further, citing an example of bitcoin platform Square, Dorsey said that, for social media, he wants the team to either find an existing decentralised standard or to build a new solution from scratch.

If this works, Dorsey said that this will allow Twitter to access and contribute to a much larger audience of public conversation, focus on efforts to build open recommendation algorithms which promote healthy conversation and would force them to be far more innovative than the existing platform.

Brain Condenanza To Invest In India

Brian Condenanza, a prominent name in the blockchain industry, recently announced his plans for investing in India. He said that the blockchain technology is pushing boundaries and has the potential to bring massive transformation in the world.

“I’ve seen many great fintech apps coming out from India to the world. India has great potential and great talent and I am looking forward to investing in markets like India,” he added.

Singapore-based community-based startup SpaceChain recently announced that its blockchain hardware wallet technology is on its way to the International Space Station (ISS). According to SpaceChain, this is the first technology demonstration of blockchain hardware on the ISS, and it will be installed in Nanorack’s commercial platform on the space station. Through this, the team will be increasing the security of the operation, which requires multiple signatures (approvals) to complete the blockchain transactions or access.


Nike’s blockchain-based sneakers called CryptoKicks recently got patent approval. Nike will be using blockchain-powered ‘cryptographically secured digital assets’ to the sneakers. In other words, using blockchain, Nike will now be able to track the ownership and verify the authenticity of sneakers.

In addition to this, when the sneaker is sold to someone, it will transfer the ownership by trading both the real shoe and the associated digital assets. The digital asset can then be stored in the cryptocurrency wallet app, developed by Nike.