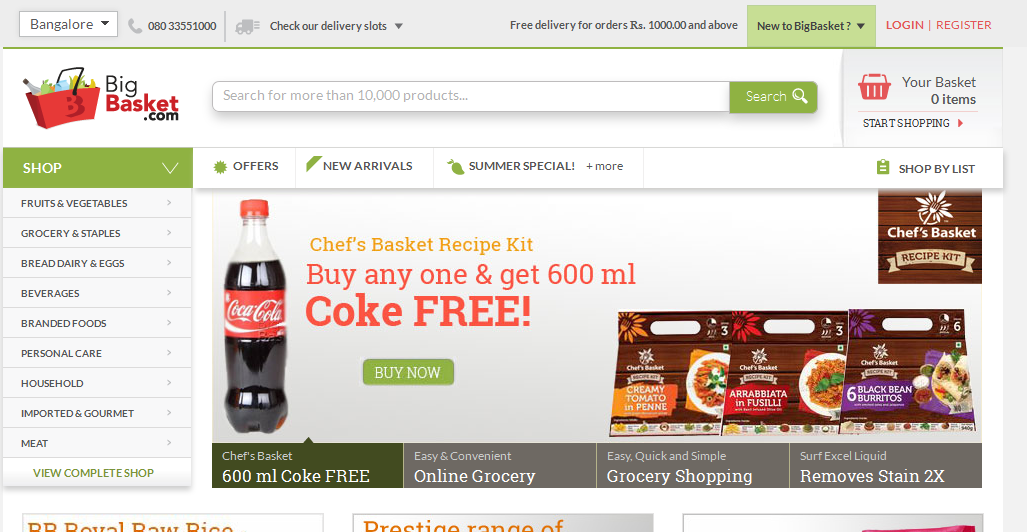 Bangalore based online grocery retailer BigBasket has raised over INR 200 Cr. in a fresh round of funding led by Helion Ventures and Zodius Capital. With this round, BigBasket is now valued at over INR 1,000 Cr., as per reports.

Serial investor duo K Ganesh and Meena Ganesh are co-promoters of BigBasket. Ascent Capital also owns a majority stake in the company after it had invested $10 Mn into it two years back.

We have earlier reported about this development.

The funding raised will be used by BigBasket.com to expand its operations in the top 10 cities by December 2015. At present it has operations in cities including Bangalore, Mumbai, and Hyderabad. By the end of this year the startup has plans to kickstart its operations in Pune and NCR.

It is currently, clocking 5,000 orders per day and growing at a rate of more than 20% month-on-month. As per the company, it has a customer base of more than 1.5 lakh customers.

The store offers its customers with a catalog of over 12,000 products including fresh fruits and vegetables, grocery and staples, meats, personal care and branded products.

The startup had achieved operational profit in its hometown of Bangalore, and is expected to show up with an annualized revenue run-rate of INR 250 Cr.  at the end of this fiscal.

Earlier this year, BigBasket had raised $ 3Mn in a bridge round of funding from a Singapore-based private investor. ZopNow is another player operating in the same space.