Amazon Vs Future Feat. Reliance: Everything You Need To Know Explained In 6 Points

Amazon Vs Future Feat. Reliance: Everything You Need To Know Explained In 6 Points 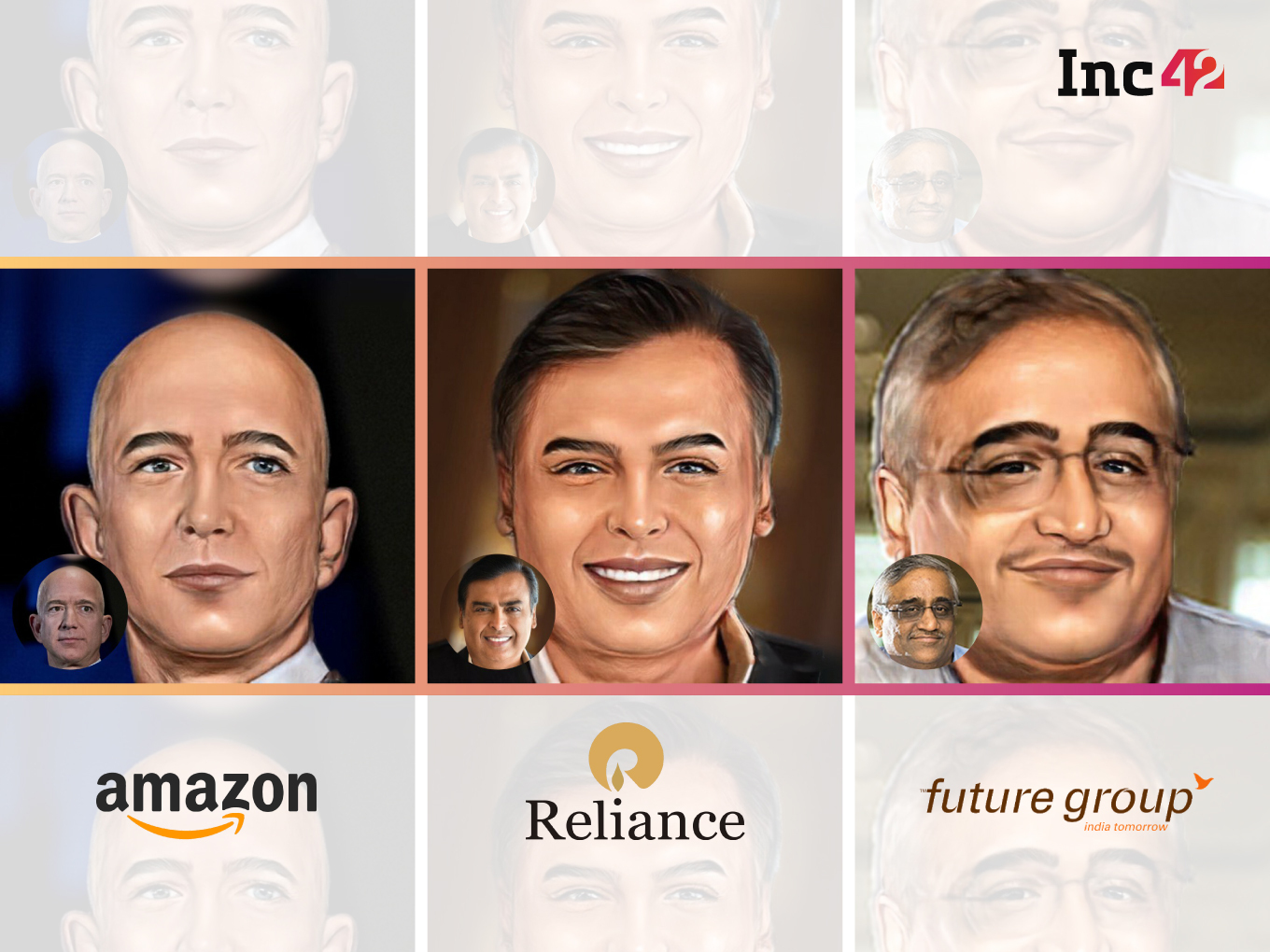 The Supreme Court has listed the Amazon vs Future Group case on May 4, 2021 for final disposal after months of lawsuits at various courts in India and abroad

The case is also being heard by a tribunal of the Singapore International Arbitration Centre; the emergency arbitrator has already passed the interim order in favour of Amazon

What are the details of this high-profile case and will it have larger implications on the Indian retail landscape? Read here

One of the biggest lawsuits in Indian business history is soon about to come to a conclusion. The Amazon-Future Group battle at various courts around India and even in Singapore could determine the future of Indian retail and the direction of ecommerce.

Hearing Amazon’s special leave petition, the Supreme Court of India on April 19, 2021 had stayed proceedings in the case, after the Delhi High Court had given its ruling in the Amazon-Future battle. The apex court has set the next date May 4 for the final disposal of the matter.

The single bench of Delhi High Court on March 18 had not only said the Singapore International Arbitration Centre’s (SIAC) interim order was valid in India, but had also concluded that Future Group has willfully violated the emergency arbitrator’s order. Rejecting objections raised by Future Group entities, the court awarded costs against them of INR 20 Lakh.

The order was later stayed by the divisional bench of the Delhi High Court on March 22, 2021. And now the battle is headed to the Supreme Court. While the SC’s verdict on the matter is already being viewed as a potential landmark judgement as it will set the precedence in arbitration awards cases in India, there is a lot more in the balance with the future of Indian retail at stake.

So here are the most burning questions in the Amazon vs Future case and why the deal between Reliance Retail and Future Group has stuck in a legal muddle for more than nine months.

Amazon Vs Future Group: How The Problem Began

In September 2019, US ecommerce giant Amazon informed the Competition Council of India (CCI) filing that it has proposed to acquire 49% stakes in Future Coupons, owned by India’s second-largest retail chain, Future Retail.

The notice, which was approved by CCI in November 2019, had three set of transactions:

Besides the transactional part, Amazon had acquired certain leverage with the ‘call option’ it was provided. The ‘call’ gave Amazon the rights to exercise the option of acquiring all or part of promoting company Future Retail’s shares.

The deal had reportedly also mentioned a list of 30 entities with whom the Future Group could not transact, including Reliance Retail, a subsidiary of Reliance Industries Limited. This was supposed to be another exclusive deal with Future Group just as Amazon had done with Shoppers Stop in 2017 by acquiring 5% stake at INR 180 Cr.

As a result, Amazon first sent a legal notice to Future Group and having got no response from the latter, in October 2020, Amazon approached the Singapore International Arbitration Centre (SIAC), a non-profitable organisation that offers an alternative dispute resolution process arising from cross-border transactions claiming that Future Group had violated the contract under which Amazon had purchased the shares of Future Coupons, a subsidiary of FRL.

Why Did Amazon Go To SIAC?

One of the lawyers, who represents Amazon in this case, told Inc42 that the ecommerce giant approaching SIAC was in accordance with the contract where it was mentioned that in case of any dispute, either of the parties are free to approach SIAC.

Legal experts said Amazon’s SIAC plea also has to do with the political capital enjoyed by Reliance in India. Amazon knew that there would be difficulty because of the nature of the parties, which are involved. And, in such a case, Amazon wasn’t certain that it would be able to enforce or get an award in its favour. The short window to enforce its rights as per the nature of the transaction also forced it towards Singapore. In contrast, the SIAC promised an emergency arbitration award within 14 days of the appointment of the arbitrator.

To make its case, Future Group also filed a plea with the SIAC, which is an internationally recognised arbitrator, arguing that since the contract was signed between Future Coupons and Amazon, FRL should be kept out of this. However, the SIAC declined to exclude.

What’s The SIAC Emergency Award In The Case?

The SIAC on October 25, 2020 passed an interim order in favour of Amazon. This barred FRL from taking any step to dispose of its assets or issue any securities to secure any funding from a restricted party.

In order to get it implemented, Amazon sent a letter along with the SIAC interim order, an emergency arbitrator award to Indian market regulator SEBI and CCI.

What Are Future Retail’s Arguments In The Case?

After the SIAC’s emergency award, Future Retail approached Delhi High Court in November 2020 arguing that the interim order by SIAC was passed without jurisdiction as the concept of emergency arbitrator is alien to Indian Arbitration Act.

Future alleged that Amazon has violated the Foreign Exchange Management (Non-debt Instruments) Rules 2019 and the Securities and Exchange Board of India (Substantial Acquisition of Shares and Takeovers) Regulations, 2011.

In its plea, adding that Amazon is not a party to FRL shareholder agreement (SHA), Future said, “On the contrary, it is evident that Amazon was consciously not made a party to the FRL SHA and FRL was consciously not made a party to the FCPL SHA and FCPL SSA. This was to ensure that the agreement did not violate the FEMA FDI Rules under which any investment made by Amazon in FRL (a company engaged in the “multi brand retail” sector) would have required prior government approval.”

Future requested the court to injunct Amazon from writing letters to SEBI and CCI.

However, the single judge bench of Delhi high court comprising justice J.R. Midha on March 18, 2021, declined to grant an interim injunction restraining Amazon from writing to SEBI, CCI and other authorities about the arbitral order against its asset sale. The judgement also concluded that Future Group had willfully violated the emergency arbitrator’s order. On March 22, a division bench of Chief Justice DN Patel and Justice Jasmeet Singh of the Delhi High Court stayed the operation of a single-judge bench order, leading to a series of cases in the Delhi HC as well as in the Supreme Court.

Explaining why SIAC’s order matters to India, Praveen Raju, partner at Spice Route Legal, told Inc42 that the two parties have contractually agreed for dispute resolution mechanisms outside India. It is common in case of cross border transactions, people want to have neutral jurisdictions for dispute resolution and SIAC has obviously emanated as one of those neutral jurisdictions. “So there’s no problem with contracting parties agreeing to have any dispute resolution through a process which is outside India, it is posted under the Indian Arbitration Act, as India is a signatory to the New York and Geneva conventions which also direct the signatories to have the ability to enforce foreign arbitral awards.”

Raju further said that when a foreign emergency award is delivered, the respective party will have to notify the local courts and authorities to pass an order which could implement the award in that particular jurisdiction — India in this case.

However, there are certain exceptions in the Indian Arbitration Act under which India may not agree to enforce an arbitration award. This is based on if the arbitral award is in conflict with the public policy of India or is against the fundamental policy of India or is contrary to the interests of India. The present case is an injunction award that Amazon has now brought to India and wants Indian regulators and judiciaries to enforce.

However, in this particular case, it’s an interim award that Amazon has got, added Raju. “There is no detailing in the Arbitration Act when it comes to the implementation of interim order.”

Will The SC’s Verdict Have An Implication On Indian Retail?

As the matter is now in Supreme Court it will set a precedent whether an interim award by an arbitration tribunal is enforceable in India or not.

Raju said that if one looks at a strict interpretation of the Arbitration Act, one could possibly argue that the SIAC award is not enforceable in India. “But I don’t think that’s the intent of the legislators. The intent of the legislation is that the legislation has obviously been created to enable foreign arbitral awards to be enforced in India. So, I would assume that it would prevail and if you want to make sure that foreign investment and foreign cross border transactions continue, then you should ideally give the ability for interim arbitral awards as well to be enforced in India.”

More Questions To Be Answered

The fact is that the conflict between the two companies is not only about Amazon trying to extract money from the Reliance deal. Amazon will also want to make life difficult for Reliance Retail, which is currently India’s largest retail company.

With the acquisition of brands like Big Bazaar and other Future stores as well as its private labels, Reliance has been expecting to increase its share in India’s ecommerce market too. The company was also expecting to bridge the supply chain gaps with the help of Future stores, plans which Amazon also shared. So Amazon is unlikely to let go of this prized asset without a fight.

What will be the impact of the Supreme Court’s verdict on Reliance as well as India’s retail market and will this judgement set the tone in Indian ecommerce for years to come?

Stay tuned for the second part of the story!