As Telcos Push For Higher ARPU, India No Longer Has The World’s Cheapest Mobile Data Plans 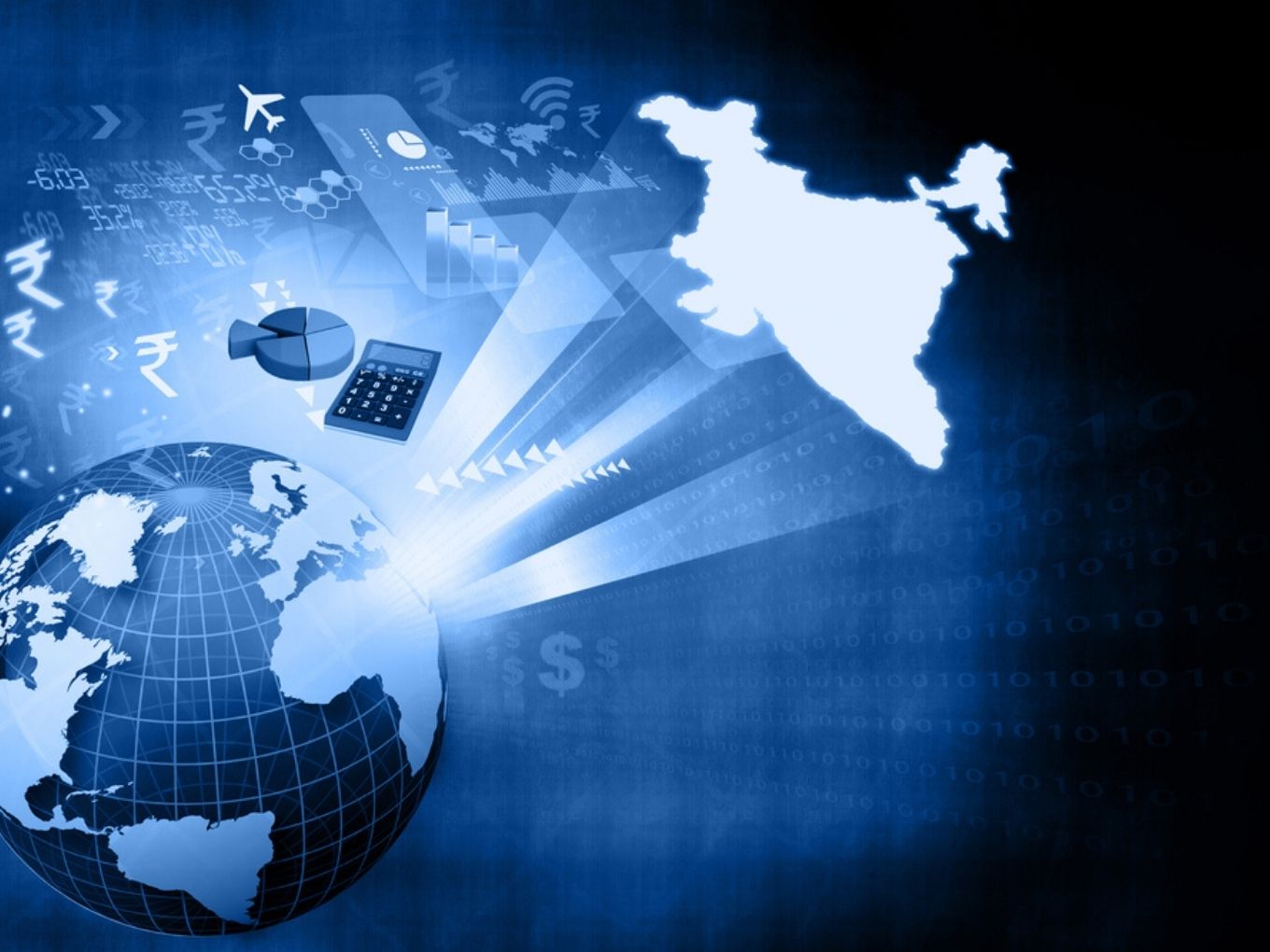 Israel now has the cheapest internet plans in the world, priced at $0.05 per GB, followed by Kyrgyzstan

One of the most vital growth drivers of the Indian internet economy has been the ultra-affordable cellular data or mobile internet plans, what many call the Reliance Jio effect. But as telecom companies look to stretch their revenue benchmarks after a couple of years of aggressive pricing, India’s lead has slipped. According to a report by a research firm Cable.co.uk, India no longer has the cheapest mobile internet plans in the world,

Even though at $0.68, the average cost of per gigabyte (GB) of data in India is well below the global average of $4.21, overall, the country has slipped 28 ranks to lose the top spot according to March 2021 data. The price of data plans in India has increased by 7.5X on average from $0.09 per GB recorded in late 2020. 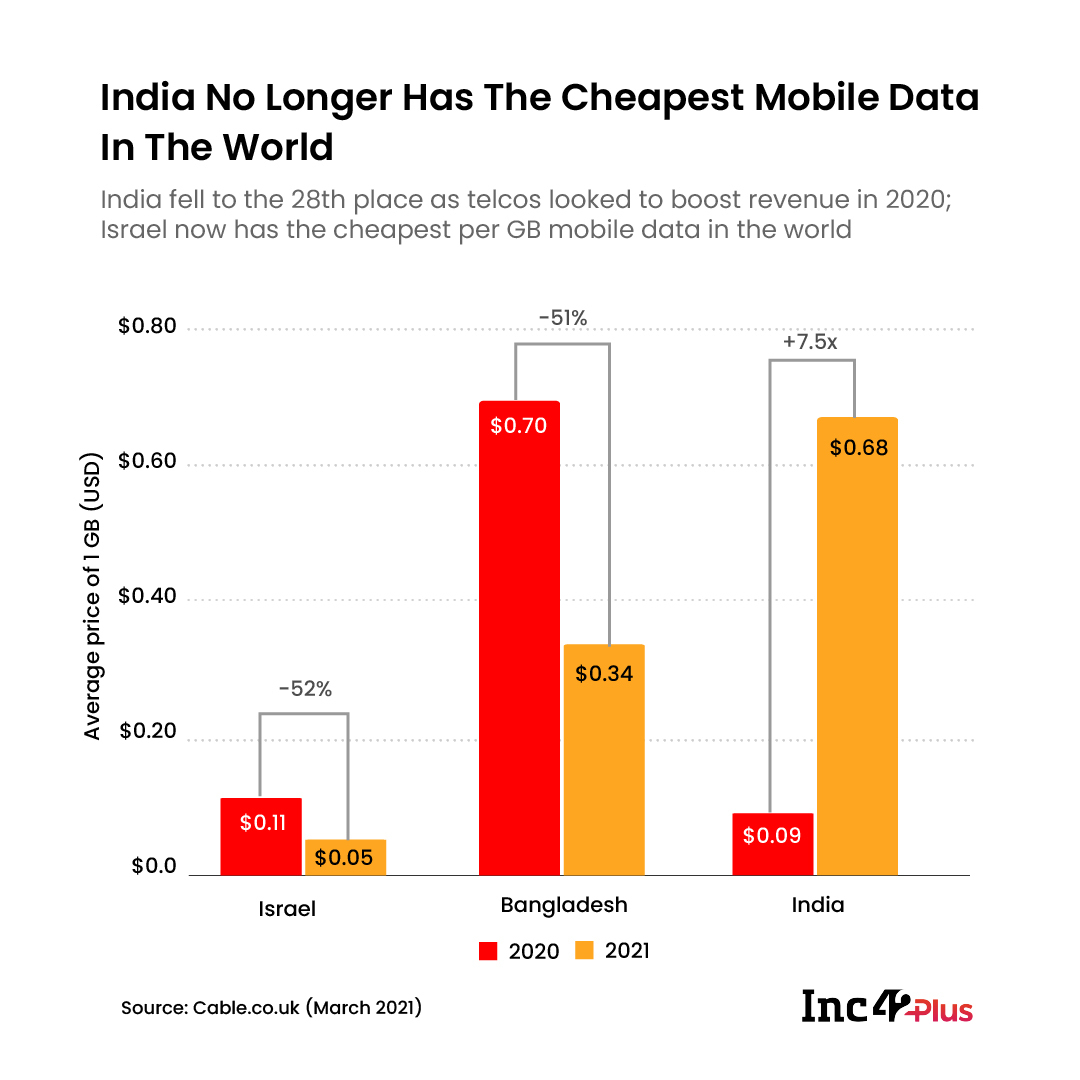 How Does India Fare Among Its Neighbours?

The study assessed the mobile data plans in 230 countries. India’s neighbouring country China also slipped five spots to 18th, even as its average mobile internet price decreased from $0.61 in 2020 to $0.58 per GB in 2021. Pakistan dropped two ranks to 19 spots, while Nepal outperformed India, by jumping six ranks to the 24th spot.

What Led To The Drop For India?

While the drop in the average per GB cellular data price was fuelled by the entry of Reliance Jio in 2016, even the increase in the past few months can be attributed to the post-Jio market conditions. While Vodafone merged its operations with Idea in light of dropping revenues and Airtel also increased its tariffs to make up for the net losses in its subscriber base, post Jio.

While between 2016 and 2019, the data wars led to India having the cheapest mobile data plans in the world, things have changed drastically in light of some tax hurdles as well as the telecom industry’s push for higher revenue.

Reliance Jio’s stronghold on the telecom market has slowly loosened as in February 2021, Airtel managed to add more subscribers for a second straight quarter. Airtel outpaced Reliance Jio’s net subscriber additions by a wide margin, with Airtel adding 14.2 Mn subscribers from October-December 2020. In the previous quarter, Airtel had seen a net addition of 13.9 Mn subscribers, as compared to Jio’s 5.2 Mn and 7.3 Mn subscribers respectively in the preceding two quarters.

Even in terms of revenue, Airtel has been doing well with 32.4% growth in mobile revenue and 61% improvement in EBITDA for the quarter. Average revenue per user (ARPU) rose 23% from the past quarter to INR 166, while 4G services accounted for 54% of the total subscriber base. These are all numbers that match or outperform Reliance Jio. During the same time period, ARPU for Jio increased to INR 151 per subscriber per month, but it’s lower than Airtel’s ARPU.

According to the Telecom Regulatory Authority of India (TRAI) report of March 2021, Reliance Jio continues to lead the market with 35.30% market share of the telecom market. It is followed by Bharti Airtel at 29.62% and Vodafone India at 24.58%.

Besides the need to increase their ARPU to increase profit margins, the two trailing telcos — Vodafone-Idea and Airtel — also had to contend with higher tax payments, after the Indian government’s ruling on the adjusted gross revenue (AGR) dues. Overall, telecom companies owe over INR 1 Tn to the department of telecommunication in back taxes.

Given the huge tax bill, telcos have urged the government to fix a floor tariff or price to restore the long-term viability of the telecom sector and bring investors back to the table, which is a severe need of the hour given the impending launch of fifth-generation or 5G networks in India. It remains to be seen whether the continued push for higher revenues in light of the increased spending towards 5G will take India further down the list of the world’s most affordable mobile internet plans.