Data Is The New Oil: The Changing Nature Of Reliance And Rise Of The Jio Digital Empire

Will Jio become the new focal point in RIL’s portfolio from 2020 after decades of petrochemical dominance?

A day where every individual transaction, piece of communication or interaction being mapped by its data is not far away. In a truly digital world, anyone transacting in the economy will leave a digital footprint at every touchpoint of exchange and interaction. It’s no wonder that data is as valuable as oil was and perhaps even as precious as gold, if not more. in such a scenario, a suite of offerings focused on keeping the consumer in an endless loop of affiliated products and services will help any business garner maximise profit opportunities. At least that seems to be Reliance’s plan with Reliance Jio and its digital ecosystem.

Pursuing his vision for a more connected and digital India, chairman of Reliance Industries Limited and arguably the most powerful business person in the country, Mukesh Ambani, launched the flagship tech product Jio — a cellular data-driven 4G telecom service which opened up mobile internet to all sections of the Indian society. Since its inception in 2016, Jio has managed to become a household name in India through its commendable product-market-fit supported by a combination of right price and data usage. Reliance Jio Platforms, which today operates the Jio telecom business has managed to capture 52% (356 Mn) of the total 687 Mn internet subscribers in India as of September 2019.

The launch of Jio in September 2016 changed India and RIL fundamentally and perhaps permanently. From being a conglomerate largely focused on traditional sectors to a new-age tech and digital giant, Reliance Jio has also played a major role in bridging the urban-rural digital divide in the country. Since its launch in 2016, the rural internet subscriber base(as per TRAI) in India has grown over 2.1x from 115 Mn (2016) to 247 Mn (September 2019). With the wider adoption of the internet, the total addressable market for consumer internet services had grown at an incredible pace and early movers usually tend to gain more in a market which is growing exponentially along with the government’s support.

DECODE THE IMPACT OF COVID-19 ON INDIAN STARTUPS

The Changing Nature Of Reliance’s Business

Over the decades, the Reliance brand name has been a trendsetter in the Indian business ecosystem in numerous ways. The first Reliance Textile Industries’ IPO launched in 1977 was oversubscribed seven times and is widely credited with creating the equity cult in India. Forty-two years later, in 2019, the Reliance Industries Limited (RIL) became the first Indian company to cross the INR 10 Bn mark in terms of the total of market capitalisation. With the motto of “innovation-led growth,” the RIL is once again on the journey to disrupt the tech industry of India. The optimism shared by chairman Ambani was reflected in the investor sentiment of RIL’s stock performance. 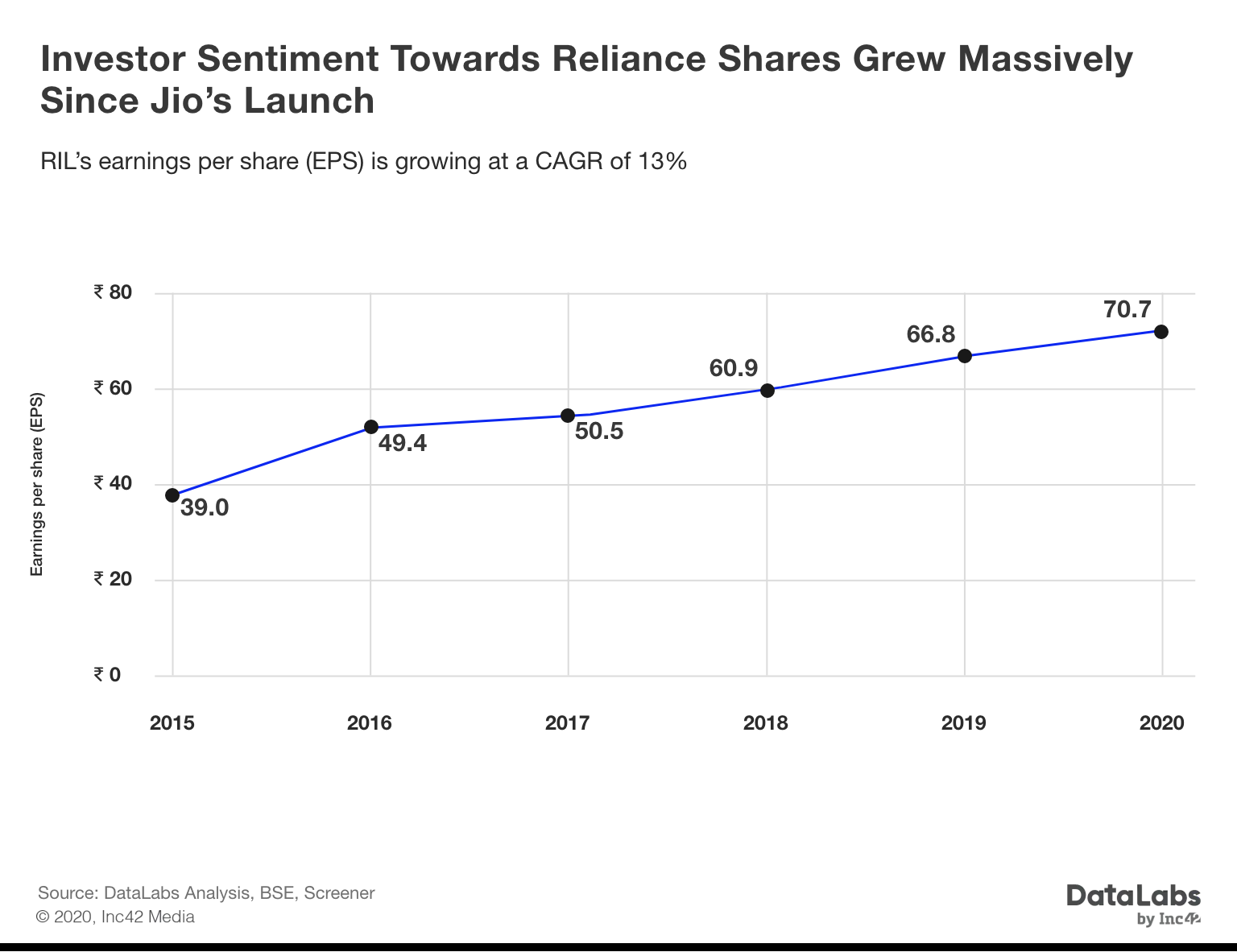 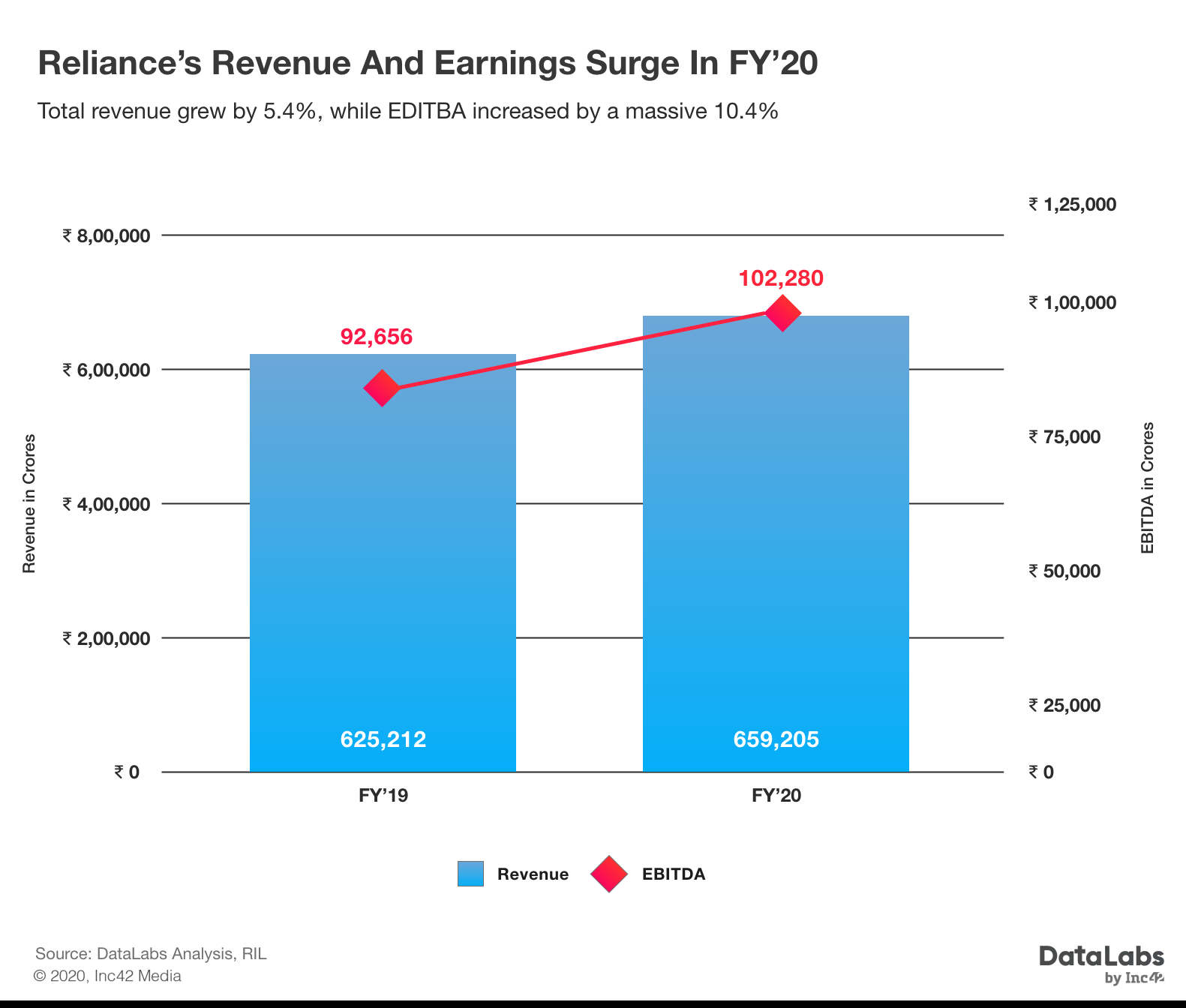 Petrochemicals and petroleum refining & manufacturing (R&M) remain the two largest revenue contributors for RIL in the fiscal years of 2019 and 2020. But the digital services vertical has witnessed the highest surge in percentage contribution to total EBITDA at 7.2 percentage points. This indicates the impact Jio has had on the operations of the company as well as the direction of cash flow.

DECODE THE IMPACT OF COVID-19 ON INDIAN STARTUPS 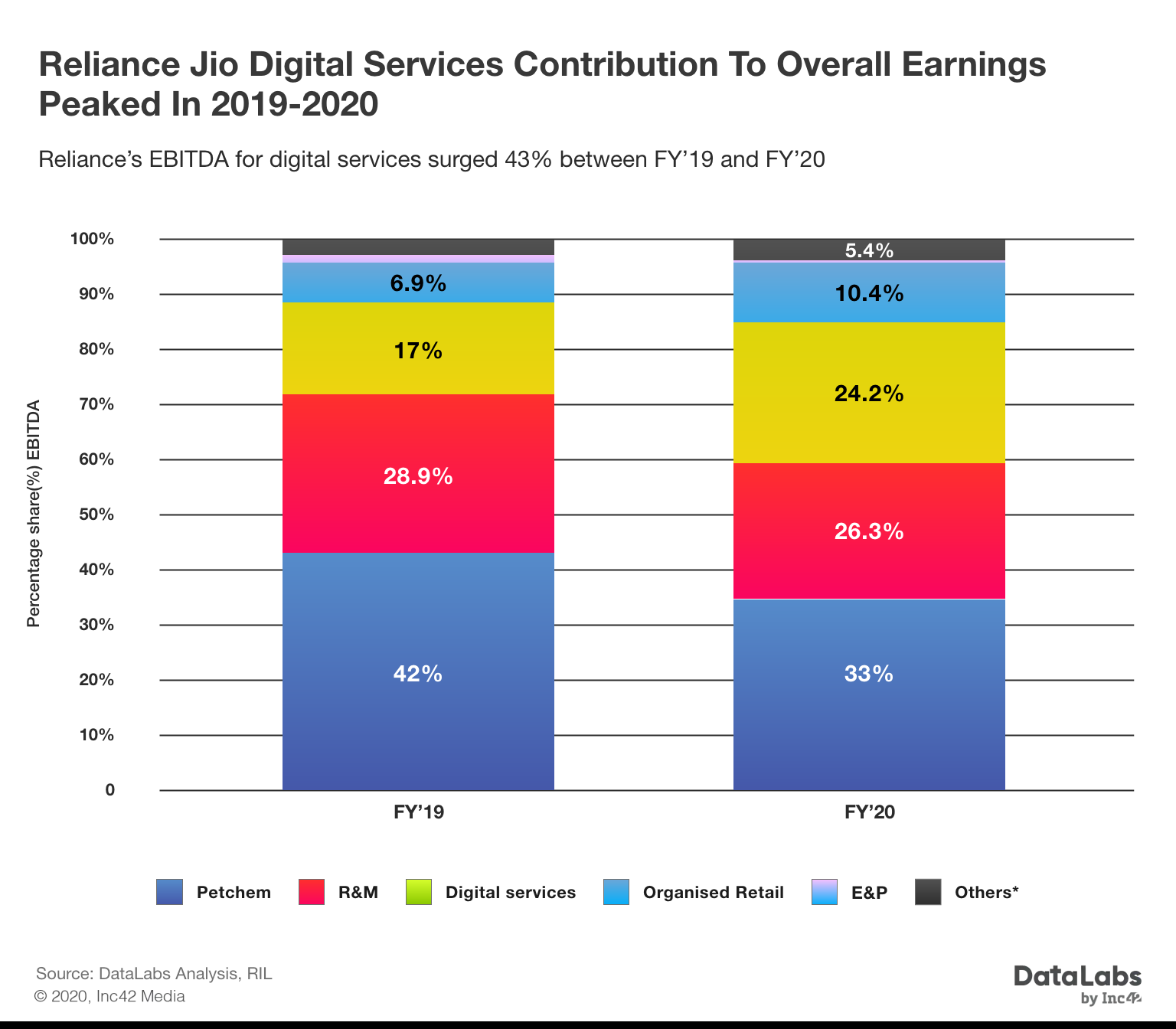 As per the latest data released by RIL, the EBITDA for digital services jumped from INR 15.1K Cr in FY’19 to INR 21.6K Cr in FY’20. Indicating that the adoption and utility of the product in the market is increasing. With the launch of other affiliated services such as Jio TV, Jio Payments Bank, JioMoney, JioSaavn, Jio Fiber, JioMart, JioMeet and others, the user engagement inside the Jio internet ecosystem is expected to rise at an unprecedented rate.

Wider product offerings will also increase the revenue streams for the company which as a result will boost the overall turnover of Jio Platforms, the umbrella company formed late last year to operate Reliance Jio and the wide suite of digital businesses. In addition, Reliance Jio Infocomm handles the infrastructure wireless broadband and wired home and commercial broadband services. The net profit of Reliance Jio Infocomm increased from IN 2,964 Cr in FY’19 to INR 5,562 Cr in FY’20, an increase of a whopping 88%. 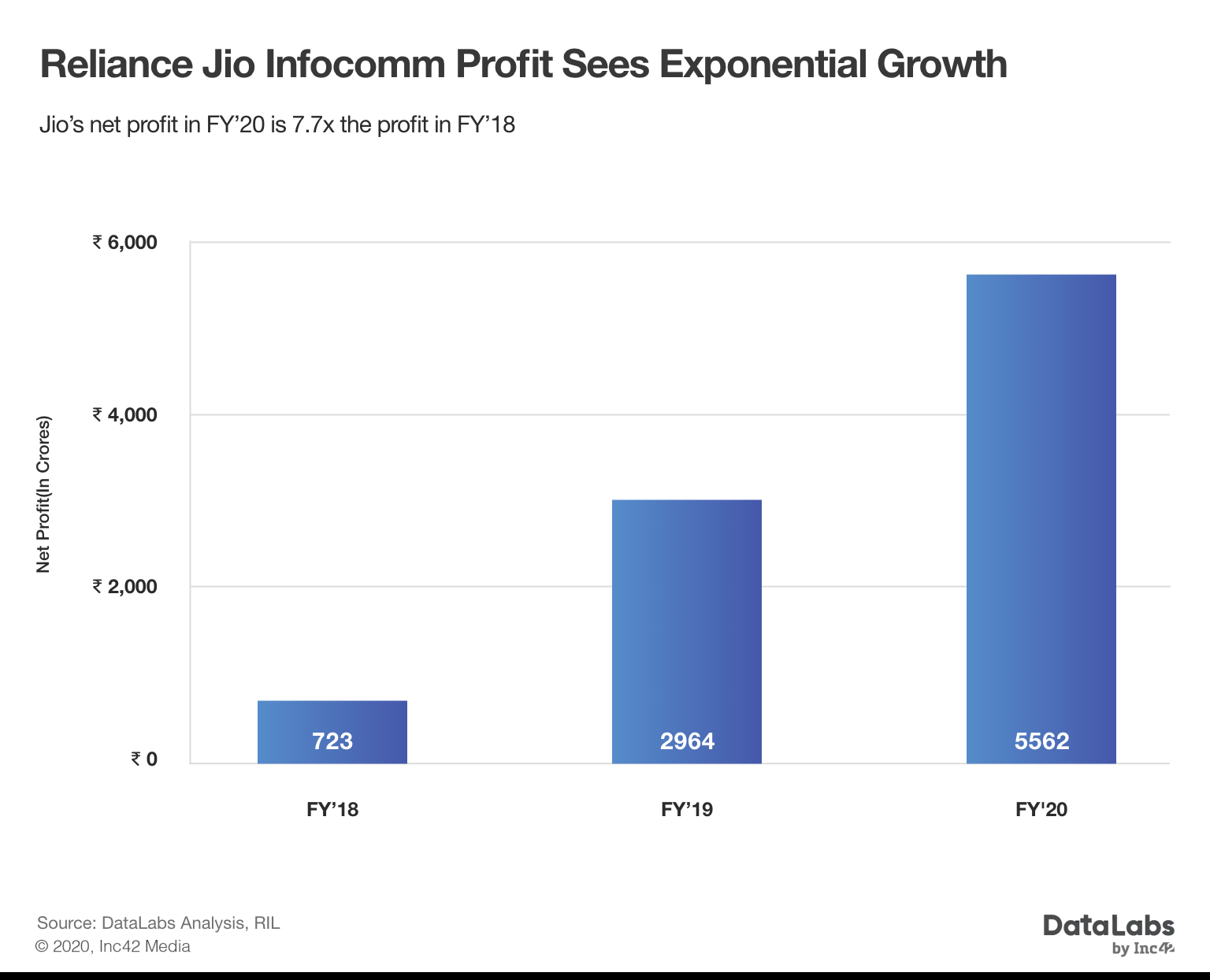 Apart from digital services, organised retail is also booming for Reliance. Although the current lockdown due to the Covid-19 pandemic is expected to hamper the quarterly performance of the retail segment for the fiscal year 2021, the overall retail segment has witnessed commendable growth in terms of revenue generation. Between the financial years 2018 and 2020, the average annual growth rate of revenue of Reliance Retail was 57%.

With the launch of JioMart and the allied ecommerce enablement for Reliance Retail stores and brands, over the next few quarters, a significant portion of the retail revenue might be driven by digital engagement.

These are interesting times for Reliance Retail as the Covid-19 situation will only exacerbate fears around large retail spaces and sanitation and hygiene costs are likely to double or triple for retail players. But at the same time, the launch of JioMart might soften the blow from any loss in retail revenue. 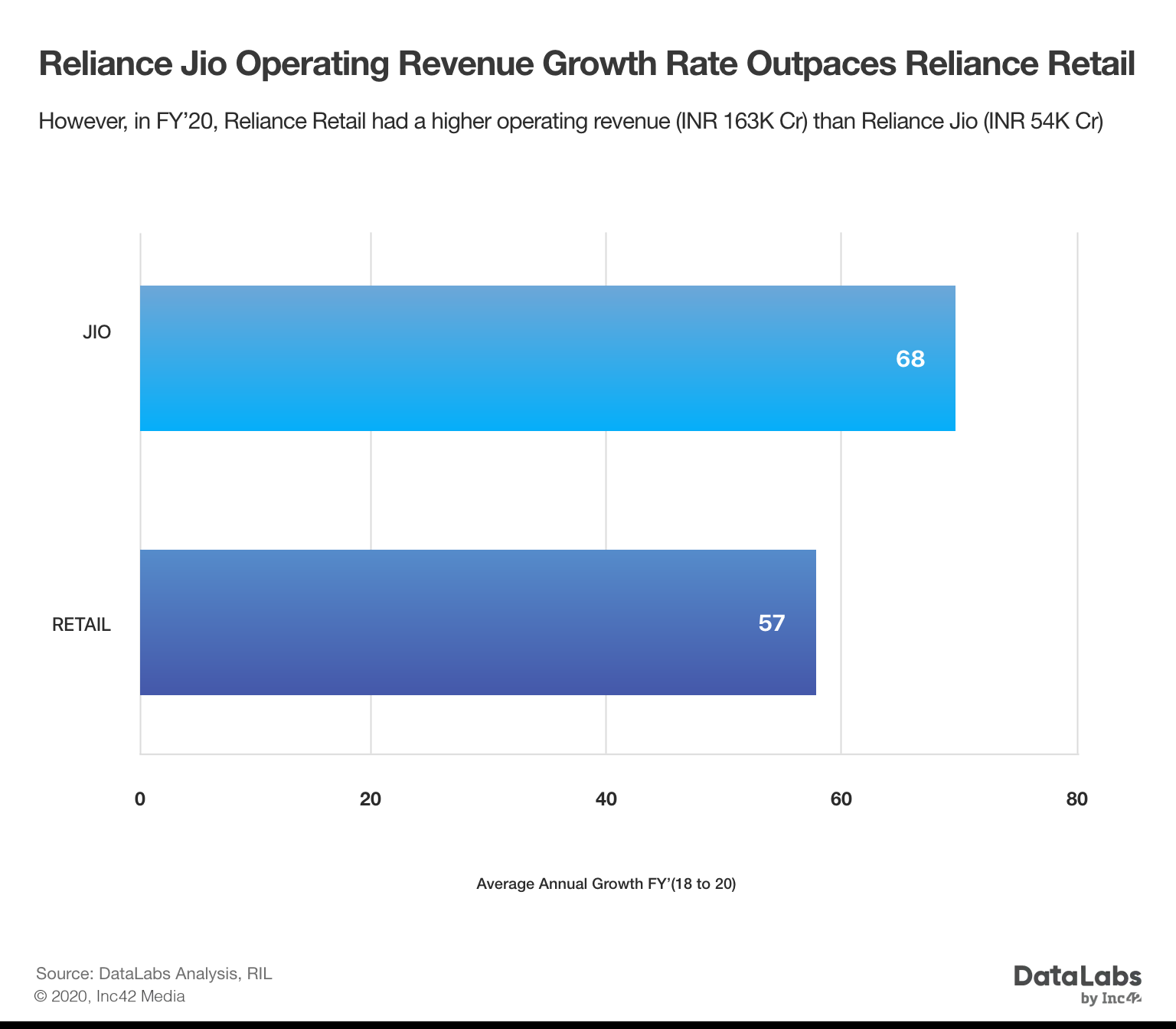 The retail footprint of Reliance can which is spread over 39K retail outlets in India will not only feed the JioMart business but also act as a touchpoint for the payments business and other digital services such as JioFiber, mixed reality and entertainment.

Will Digital Become The Focal Point Of Reliance’s Future?

Today, Reliance Jio owns the distribution chain of digital services through its apps, the tech and cloud infrastructure for many small and medium businesses, thanks to its Microsoft Azure partnership, as well as the telecom or connectivity layer through Jio 4G and Jio Fiber. This creates a very sophisticated user engagement loop that is hard to break once all its products and services reach a critical mass. Such balanced vertical integration by Reliance Jio is unprecedented in the world and will enable it to offer lower costs in digital services and eventually knock off existing competition.

The profit maximisation from the Jio ecosystem will be something which the world has never seen before, with the recent investment from Facebook, the two companies combined have an arsenal of infrastructure and data which can be analysed to interpret and predict user behaviour patterns in a more accurate manner. Besides this, Reliance Jio Platforms has raised INR 5,655 Cr from private equity firm Silver Lake at an equity value of INR 4.90 Lakh Cr and an enterprise value of INR 5.15 Lakh Cr. With this deal, Silver Lake represents a 12.5% premium to the equity valuation of the Facebook investment announced on April 22, 2020, as per Bombay Stock Exchange (BSE) fillings.

The alliance with Facebook and the new investments are largely expected to boost Jio adoption in rural areas where Facebook services comprise the primary online experience for new-to-internet users. Even With such an aggressive market penetration strategy, Reliance Jio is poised to create a digital empire, the likes of which the world has never seen before.

DECODE THE IMPACT OF COVID-19 ON INDIAN STARTUPS
Loading Next…