Amazon Echo Will Be Available In Three Variants - Echo, Echo Plus, and Echo Dot. Amazon has finally launched its most awaited product of the year – a smart, wireless speaker, Echo powered by its AI enabled virtual assistant Alexa in India. Amazon Echo will be available on an invite-only basis on the Amazon’s global website in three variants – Echo, Echo Plus, and Echo Dot.

Last month, Inc42 had reported about Amazon’s plans of launching Echo and Alexa in India during Diwali.

The company has also announced plans of launching Amazon Prime Music in India soon. As per the statement, the Prime Music service is currently available as an exclusive preview on Echo. With this, Amazon has also launched Alexa Skills Kit (ASK) and Alexa Voice Service (AVS), enabling developers around the world to build voice experiences for Alexa customers in India.

Amazon Echo range includes devices which are voice-controlled speakers designed entirely around the user’s voice. This means they are always ready, hands-free, and fast. Alexa is the brain behind Echo and since Alexa runs in the cloud, the service is always getting smarter.

Basically, Amazon Echo is the personal assistant built out of the phone for day-to-day chores which will allow users to control everything through one device, which includes all electronics. One can book a cab, get any information, get weather updates, set alarms, play music or a movie on Amazon Prime Video, shop from Amazon, buy groceries online, book a flight, even draft and send work emails, and the list goes on. While Echo sells for $179 and the Echo Dot sells for $50 in the US, these will likely be priced around $172-$187 (INR 11K-INR 12K) and $78-$93 (INR 5K-INR6K) respectively in India. 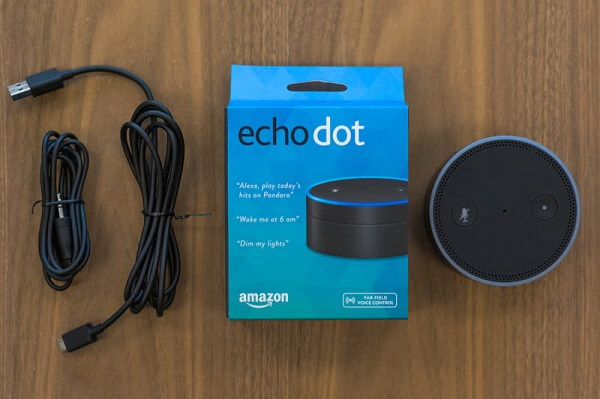 The Alexa Skills Kit (ASK) is a collection of free, self-service APIs and tools that make it fast and easy for developers to create skills, or capabilities, for Alexa. With ASK, designers, developers, and brands can build engaging skills and reach millions of customers in the US, UK, Germany, and now India.

“Our philosophy from day one was to make it as easy as possible for developers to create voice experiences with Alexa and reach customers in a totally new way,” said Steve Rabuchin, Vice President, Amazon Alexa. “Tens of thousands of developers are already building innovative Alexa skills and Alexa-enabled products. We are excited to expand our tools to enable developers around the world to reach Alexa customers in India.”

At present, developers from India and all over the world are creating voice-first experiences with Alexa including daily news updates, interactive games, smart-home integrations and more. More than 10,000 skills will be available when the service launches to customers in India this month.

The easiest way for Alexa skill developers to connect their skill to the cloud is to use AWS Lambda, an innovative computing service that runs code only when needed and scales automatically, so there is no need to provision or continuously run servers. Developers can also enhance and scale skills using additional AWS offerings such as Amazon Elastic Compute Cloud (Amazon EC2), Amazon Simple Storage Service (Amazon S3), Amazon DynamoDB, and Amazon CloudFront.

Through AVS, device makers can add a new intelligent interface to their products and offer customers access to a growing number of Alexa features, smart home integrations, and skills. Starting today, developers can begin building an AVS prototype and can sign up for the developer preview to be notified when AVS will be widely available for customers in India.

In the two years since AVS launched, developers have integrated Alexa into a variety of devices including mobile phones, wearables, smart home devices, and speakers. Tens of thousands of developers are taking advantage of AVS to voice-enable their products. Hardware makers are already planning voice-driven experiences for customers in India— here’s what those developers are saying:

For instance, HTC Corporation, an innovator in mobile and virtual reality technology is using the Alexa Voice Service to create a hands-free Alexa experience. The recently launched flagship HTC U11 was the first smartphone on the market to feature hands-free wake word access to Amazon Alexa. Also, BPL will bring its first smart speaker with Alexa to customers in India in 2018.

AI And IoT Market In India

Globally, the Artificial Intelligence market is forecasted to reach $5.05 Bn by 2020, at a CAGR of 53.65%. Also, India is considered as the third largest global site for AI companies. Further, a Google report points out that 90% of new Internet users coming online in India are non-English speakers. No wonder, tech companies are rethinking their products for these newcomers and this includes giants like Google, Facebook, Microsoft and more besides Amazon.

“By 2020, we believe industries such as utilities, manufacturing, automotive, transportation and logistics are expected to see highest adoption levels of IoT in India. The government’s planned investment of about $1 Bn for 100 smart cities, over the next five years, is expected to be a key enabler for IoT adoption across these industries,” said the report.

In the current year, Amazon has been seen going pretty aggressive with the new launches in India, besides, fueling existing business. As far as new launches are concerned, in April this year, it launched its video streaming device, Amazon Fire TV Stick, its rival to the Google Chromecast – in India priced at $62 (INR 3,999). The company also introduced Prime membership and Amazon Prime Video, Amazon Now and Amazon Pantry and its e-wallet, Amazon Pay.

And now with the India launch of Alexa and Echo and plans of bringing in Amazon Prime Music too, to what extent the company to encash the opportunity and lure more and existing customers, will be worth watching.