Alibaba Capital Partners, ANT Group and ANT Financial have invested in the likes of Zomato, Paytm, Snapdeal, Bigbasket, Xpressbees among others In what could be the first major casualty in India’s economic pressure on China and the country’s new rules for foreign investments from China, tech giant Alibaba Group is reportedly close to hitting pause of further investments into Indian startups and businesses. According to a Reuters report, the Alibaba Group is among several Chinese investors who have had to rethink their investments in India after the Narendra Modi government amended the foreign direct investments (FDI) rules for countries that share a land border with India.

The rule, which sought to take all Chinese investments through the government route, has rankled feathers and many have speculated that Indian startups will end up losing out on funding thanks to the increased scrutiny and potential bureaucratic red tape. As a result, many Chinese investors have reviewed their ongoing deals in India.

The Chinese conglomerate and its subsidiaries Alibaba Capital Partners and Ant Group have invested more than $2 Bn in India since 2015 backing startups such as Zomato, Paytm, Snapdeal, Bigbasket, Xpressbees and others. Even among its existing portfolio, companies have had to look for other investors to avoid the government route. 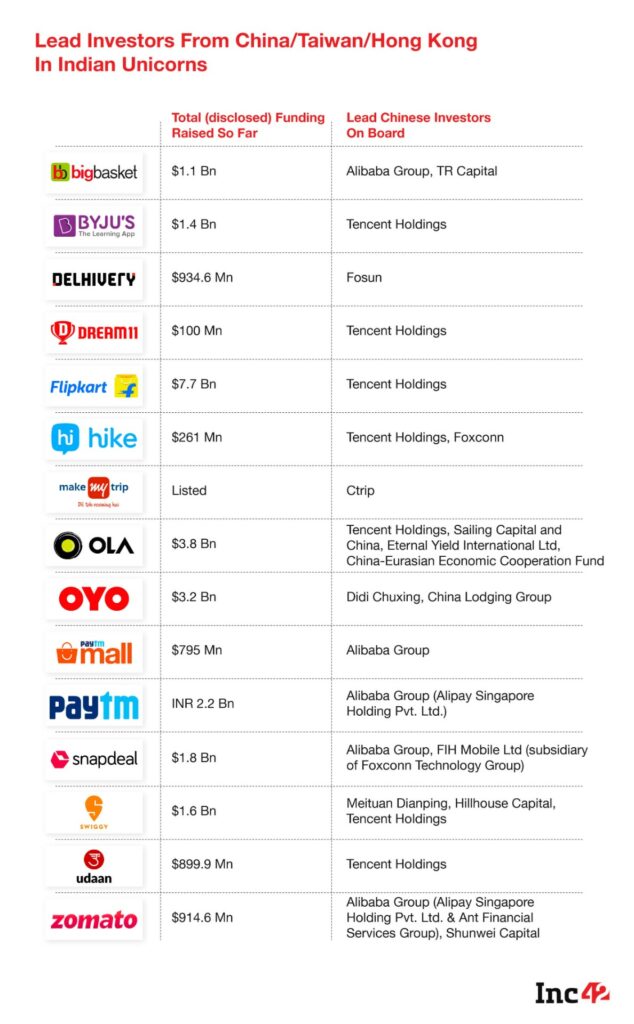 In the case of Zomato, ANT Financial was expected to invest $100 Mn in the ongoing round, but due to the FDI changes, the Indian foodtech giant had to scramble for other investors. The company is close to raising funds from Temasek Holdings’ MacRitchie Investments as per reports to make up for ANT’s inability to invest at the moment. ANT Financial has been an investor in Zomato since 2018. It had invested $210 Mn in the Indian company for 14.7% stake and became its largest investor. Then in November 2018, the Alibaba subsidiary also raised his stake in the Indian company to 23%.

In its latest initial public offering (IPO) prospectus, ANT Group detailed the impact of the Indian FDI rule changes on its investments in Paytm and Zomato. It claimed the new foreign investment rules had led to a “further evaluation of the timing” of the additional investment in Zomato, indicated above.

The Alibaba subsidiary’s stake in India’s Paytm is estimated to be of about $5 Bn, based on the $16 Bn valuations of the company ascribed to its business after a $1 Bn round in November 2019. That round was led by US asset manager T Rowe Price and ANT Group, SoftBank Vision Fund were participants. ANT Group, formerly known as ANT Financial, is an investor in Paytm since 2015.

Earlier this week, Snapdeal, another Alibaba portfolio company in India, said that the Chinese tech investor holds less than 3% stake in the ecommerce unicorn and has no role in its operations or governance. Alibaba had invested in Snapdeal’s $500 Mn round raised in 2015.