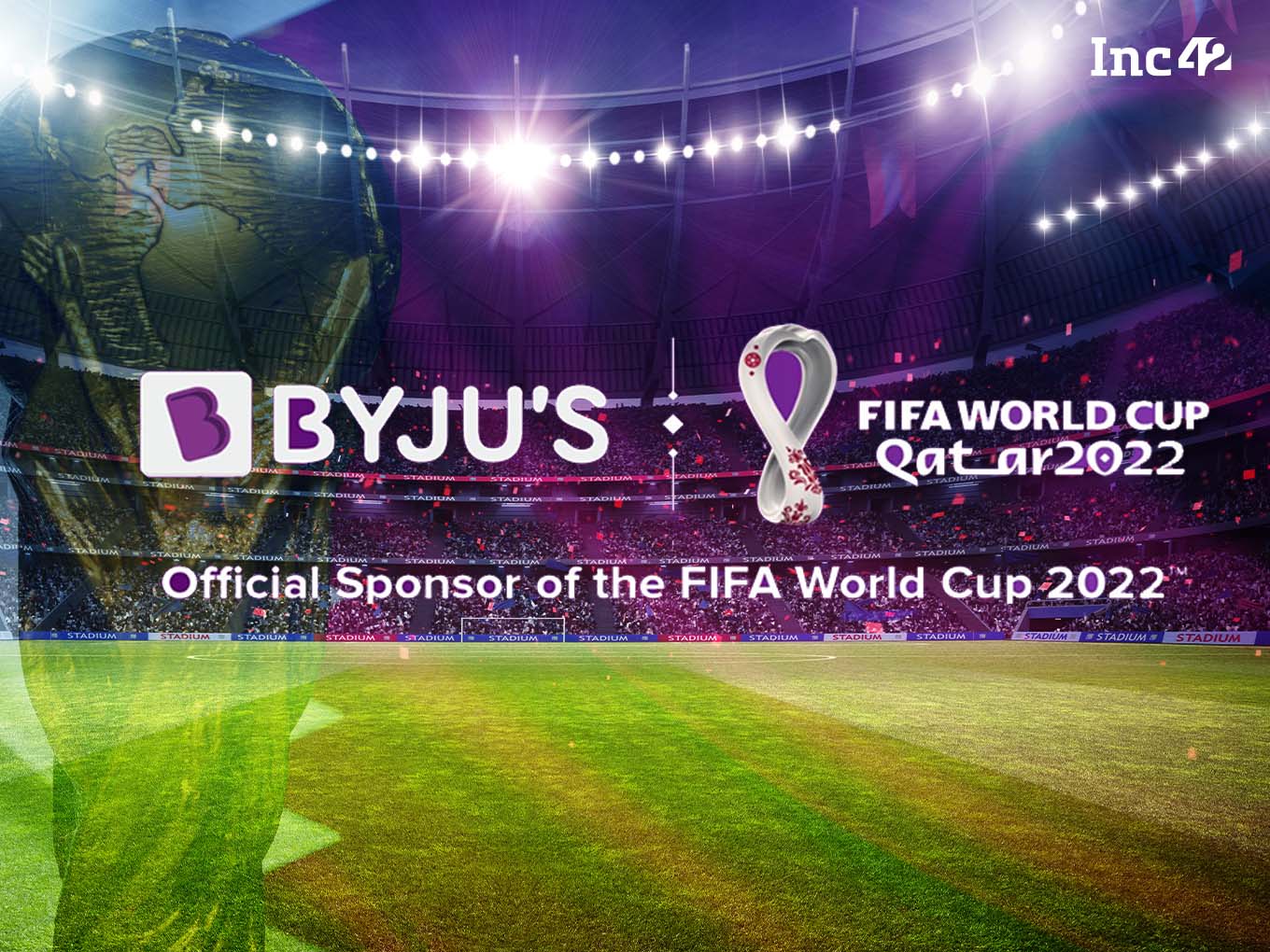 BYJU'S will leverage its rights to the FIFA World Cup 2022 marks, emblem and assets, and run unique promotions

Bengaluru-based edtech decacorn BYJU’S has been named as an Official Sponsor of the FIFA World Cup Qatar 2022 that will take place from November 21 to December 18, 2022.

Through this partnership, BYJU’S will leverage its rights to the 2022 FIFA World Cup marks, emblem and assets, and run unique promotions to connect with passionate football fans around the world, the startup said in a statement on March 24.

BYJU’S will also create engaging and creative content with educational messages as part of a multifaceted activation plan.

Incidentally, BYJU’S partnerships in Qatar dates years back when the startup had raised $150 Mn from Qatar’s sovereign wealth fund, the Qatar Investment Authority (QIA) in 2019.

This collaboration with FIFA World Cup Qatar 2022 comes at a time when a large of Indian startups and their brand logos, including that of BYJU’S, have become known faces in the world of Indian cricket.

A Look into BYJU’S Journey in Sports Partnership

Byju Raveendran and Divya Gokulnath founded BYJU’S in 2006 as a CAT coaching centre. Today, the edtech decacorn has expanded to cater to a large student community globally–from K-12 and competitive exam preparation to early learning and coding to professional upskilling courses.

The edtech decacorn, which has grown into India’s most valued edtech startup at over $21 Bn valuation, became the official sponsor for Indian Men’s Cricket team’s jersey in late 2019. OPPO had paid INR 1,079 Cr for the right to be on the jersey in 2017 but on finding the price too high and unsustainable, it had allocated the rights to BYJU’S.

At the time, BYJU’S were to hold the rights for the sponsorship till March 2022.

However, the sponsorship got renewed in early March. BCCI extended the sponsorship rights of the edtech firm until the October-November 2023 ODI World Cup. Under the new deal, the edtech decacorn will pay the Indian cricket board approximately 10% more than the current value.

With the deal extension, BYJU’S will now continue marketing its brand on the Indian jerseys for a large number of upcoming events including this year’s T20 World Cup scheduled in Australia and next year’s ODI World Cup.

According to reports, these partnerships were part of BYJU’S international expansion plan.

The startup is operational in 7 countries as it also plans to expand to other geographies in the near future. In addition to these sports partnerships, BYJU’S has gone on an aggressive acquisition spree.

The startup had acquired Austria-headquartered mathematics learning tools startup GeoGebra for $100 Mn in December 2021. In September 2021, it also acquired US-based coding startup Tynker for $200 Mn. The edtech giant had spent nearly $2.6 Bn on acquisitions in 2021 alone.

BYJU’S foray into the world of football is quite distinctive not only in terms of the startups’ previous partnerships but also when we talk about the other startups trying their way into promotion through sports events.

According to reports in 2021, startups accounted for 10% in India’s advertising expenses, up from 7% two years back, as overall advertising in the country was expected to touch INR 80,000 Cr by the end of the year.

After a major blow from the pandemic, once cricket was coming back to the pitch in late 2020 and early 2021, startups such as edtech startup Unacademy, foodtech platform Zomato, healthtech firm 1mg and others started joining Disney+ Hotstar’s lineup of sponsors for the India-England cricket series, reported Inc42. Fantasy sports platform Dream 11 also came on board as the co-presenting sponsor for the series.