At present, the app is only available for Tata employees and requires a corporate mail id to login

The app provides a plethora of options to purchase from groceries, clothes to booking flight and hotel rooms 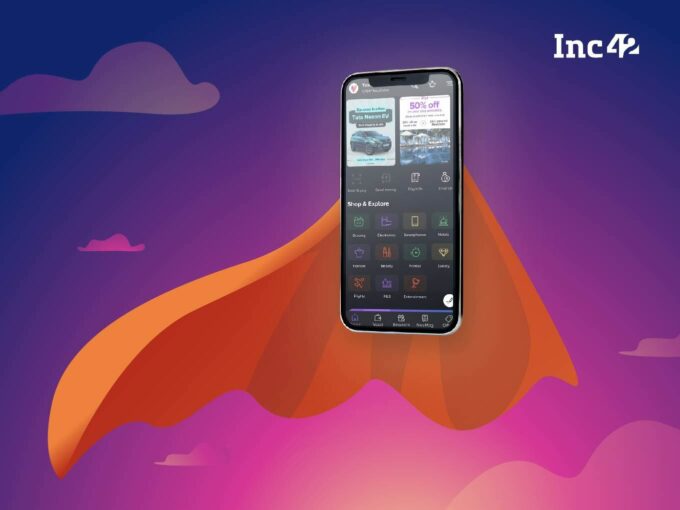 In the battle of Indian conglomerates trying to eat a slice of the ‘Super App’ pie, Ratan Tata’s Tata Digital seems to have taken a lead when it comes to the launch of an actual app and making it available for download.

Tata Digital has recently launched its Super App called TataNeu on both Android and iOS platforms. The app is currently available to all for download. However, to log in, a user needs a Tata corporate email id, as it is available only for its employees. With this, it seems Tata is testing water in a beta version mode before TataNeu’s estimated grand launch in early 2022.

Inc42 managed to get inside the app to understand and provide a sneak peek of it.

So, once you click the app for the first time, a preview of what’s all inside the app is shown to the users. The app says: Shop, eat, travel, and more; earn rewards and simplify your payments. Once you click ‘Let’s start’ at the bottom, the app asks you to enter your mobile number to share an OTP.

After entering the OTP, a new screen appear which says ‘Welcome to Tata Digital’

Below this, it is written that the app is currently open for the members of ‘Tata family.’

However, it takes you to the main page of the app once you enter a corporate email.

The app has four options on the top:

TataNeu allows users to browse through and make purchases from different categories such as grocery, electronics, clothing among others. TataNeu has integrated BigBasket and Croma for grocery and electronics respectively.

Further, a user can scroll through the entire collection of Westside under the fashion category, which is also a part of the Tata enterprise. Through the app, a user can even book Tata’s premium chains of hotels such as Taj and Vivanta. Under the flight section, the app allows its users to book only tickets for Air Asia.

It is worth mentioning here that the app has several bugs and can damage a customer’s experience while browsing. Hopefully, the company will address it before the official launch.

It also offers rewards in the form of NeuCoins which can be redeemed for later purchase.

Tata Digital, the digital arm of Tata Sons Private Limited was set up in operations in 2019 to foray into new business avenues while serving Indian customers directly.

In the last year, Tata Digital led by Pratik Pal has already created a ripple effect in the country’s emerging startup ecosystem. The company has already acquired a majority stake in popular grocery delivery platform BigBasket, and one of the leading pharmacy platforms 1Mg. Tata Digital has also invested in the country’s first fitness unicorn Cultfit, thus trying to widen its offering to its users.

Mukesh Ambani, the country’s richest person who heads the oil-to-chemical conglomerate Reliance Industries is one of the strong contenders for the super app. Reliance’s digital arm Reliance Jio which is backed by the likes of Facebook, Google, KKR, Silver Lake among others has acquired Netmeds, and Urban Ladder to strengthen its digital ecosystem.

The company’s latest acquisition was JustDial, a 25 year-year-old Internet search and discovery platform to get access to a host of experts, service providers, and small retailers in most towns and cities across India.

Another new entrant to the competition is the Gautam Adani-led Adani Group. A couple of months ago, addressing the employees of Adani Digital Labs, Adani said the company must be the “Ferrari of the digital app.”

Adani backed the statement by saying that the idea to create a super app took a shape in January this year when two people from the business team showcased a mockup version of the super app to Adani. “Seeing the demo unfold, it took me less than 30 minutes to decide that we must become a player in this space,” Adani added.