The Nimo Smart Glass is set to take on the likes of Magic Leap, Apple and others with its homegrown smart eyewear geared towards productivity

The Smart Glass is not only proprietary hardware that’s custom-made for the company, but also runs a custom Android-based operating system called Planet OS

Founder Rohildev Nattukallingal said the product, which is in beta currently, will focus on health and entertainment in the future

Last week, Mukesh Ambani and Reliance introduced JioGlass to much hype and catapulted India into the smart eyewear craze. While the unveiling of JioGlass brought about umpteen discussions and debates on social media around mixed reality and how Reliance Jio is looking to conquer it, the reality is that the product is developed by a deeptech startup Tesseract, which was acquired by RIL in 2019.

JioGlass, when it launches, will join the club of products such as Google Glass, Magic Leap, Microsoft HoloLens, Oculus lineup of devices and more in the heads-up displays and smart eyewear segment. But it won’t be the only Indian product in the list if Nimo Planet has its way.

Kochi-based Nimo Planet is part of the burgeoning hardware tech startup ecosystem in Kerala and the deeptech startup has launched its smart glasses in beta with a select set of 200 beta testers. Founded in 2018 by Rohildev Nattukallingal, Nimo Planet launched its first smart glass in 2018 and has further iterated on it to launch the beta version this month.

Nimo Planet’s Smart Glass is not only proprietary hardware that’s custom-made for the company, but also runs a custom Android-based operating system called Planet OS, which is claimed to be geared towards productivity. It is said to have features such as multi-screen multitasking, support for 1,000s of work and productivity apps, compatibility with existing laptops and mobile devices.

Talking to Inc42, Nattukallingal said that the hardware is fully compatible and optimised for Planet OS, which is built on top of the Linux kernel and Android. This, in turn, helps the company ship with low-powered hardware that can fit in the body of the glasses and optimise the software experience more thoroughly.

Nattukallingal said the idea behind Smart Glass was to create a computing device for multi-screen productivity. He said he had been using iPads for work, due to their portability and convenience, but struggled when he needed multiple screens. Having a portable multi-screen monitor enables more effective work, regardless of the location. And that is the core focus for Nimo — enable work from anywhere.

The six-member team including Suneesh Thuluthiyil – Chief Creative Officer, Jithesh Thayyil – Financial Officer, Fenil
Paul – Chief of OS, Shinil M S – Chief of Android, Dona Mariam – Business Development has already built hardware futuristic solutions. In 2016, the team had built Fin Robotics, a wearable tech gadget which can be worn on the thumb making the palm a digital touch interface. The ring called Neyya was launched in retail stores like UrbanZen Store, Sky Walk, Bloomingdale’s etc. However, due to conflicts with advisors and inventory loss in the US, the company discontinued the product. 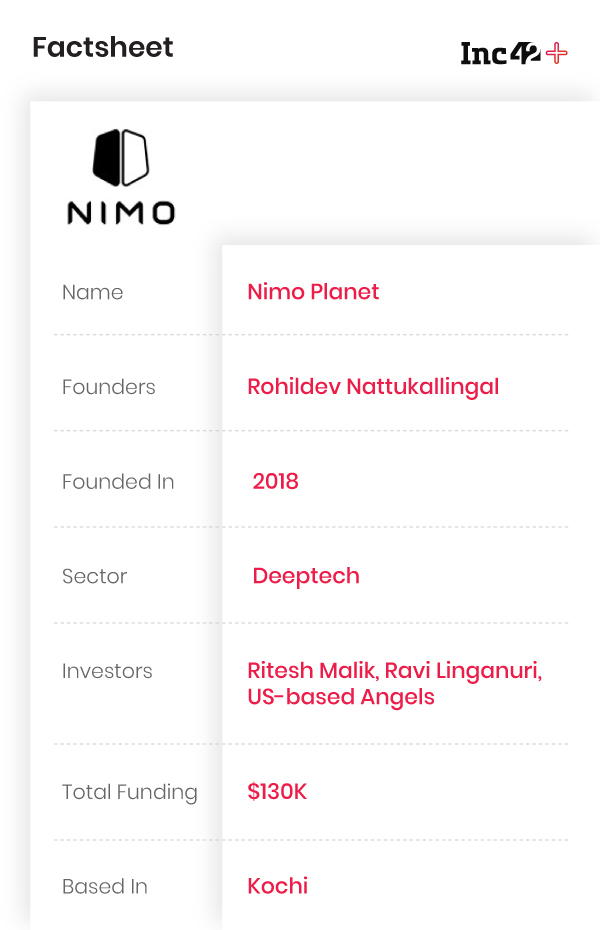 The same team moved on to the next vision of creating the Smart Glass. “The core focus was to design something that’s super portable and at the same time delivers bigger screen experience and I thought in the form of face spectacle that will help me to solve that problem,” Nattukallingal added.

In 2018, Nimo built a prototype, which could be used with a USB and a processing unit nearby. Just like Google Glass, the user could see a virtual screen pop-up at a three-meter distance to open different apps and interact with them. However, unlike Google Glass, Nimo have binocular HD display and which deliver large multi-screen experience.

With feedback from users and testing, the team kept iterating on the design and finalised the current beta version, which will be ready for beta production in the next six months.

Mimicking a standard pair of spectacles, Nimo enables the user to see a virtual screen on the lens, which actually looks as big as a 60-inch display in 3-meter distance thanks to waveguide display technology. Essentially, the display fills up the user’s real-world environment, which allows them to see digital apps without disconnecting from the real world. With head-tracking sensors, users can operate windows and apps on up to six virtual screens.

In terms of tech specs, Nimo Smart Glass comes with HD-equivalent display for each eye, an unnamed Qualcomm-based processor, up to 4GB RAM, 64GB storage, and support for WiFi, Bluetooth connectivity. It also features the sensors for head tracking, a custom voice assistant and is said to support 1000s of productivity apps.

So clearly, Planet OS will be the key to success and app compatibility will be a major challenge. Talking about this, Nattukallingal told Inc42, “That’s [Planet OS] helping us make hardware smaller— because we did a lot of optimization, so the apps that the user is going to run on six different screens will not use too much battery. We have made interactions to open multiple tabs as screens instead of closing one and opening another. All this is already built into the OS now.”

Smart Glass will support existing Android applications and app developers don’t need to rewrite any of the existing apps from scratch. But how does the screen virtual screen work?

At the moment, users can connect Bluetooth keyboards and mice to operate the OS. “Because we are focusing on productivity we want to help people to save time and work from anywhere. When people are travelling and can’t use a keyboard and mouse, they can use the smartphone as a keyboard and mouse with the Nimo app,” he added.

Finally, the company’s head tracking sensors can also enable users to give cues and perform actions. This would be further combined with voice cues for input. “In the first version, we are not putting any speakers, people can pair with any of their existing Bluetooth speakers for the sound like AirPods or headphones or speakers because we want to make things simpler in the first version,” he explained. The display has 26-degree diagonal FOV (field of view) for maximum immersion.

The battery in the beta version is said to work for 4 hours in normal use, and can be then extended for up to 7-8 hours of usage with a charging case. Overall, the product is priced at $699 at the moment, though this could change in the future.

Nimo is targeting enterprises in India and the US market initially, as several of them have gone full remote owing to the pandemic and may stay on the same path for a while longer. It is also directly focussing on employees for better productivity.

The first production units will be available to users by the end of the year with pre-booking already open. The timeline for delivery is Q2 or Q3 2021 at the moment.

“We have a different pipeline for 2022-23 with more features, better display and more capabilities. The core areas that we are more interested in the future are health and entertainment. But right now, the focus is completely on productivity,” he added.

The company is engaging with a manufacturing company in Taiwan for the beta and final production. However, Nimo is registered in Singapore and India. “All the global operations will be considered from Singapore. Major certifications will be taken care of before the shipment for each country,” he added.

At present, the company is working on streamlining the OS. It is also finalising the industrial design for the device and the mechanical design.

While the concept of smart glasses has been around for half a decade and more, it’s picked up pace this year with every major tech company now said to be working on its version of smart glasses. For instance, Apple and Facebook are rumoured to be working on AR glasses. Microsoft already sells an AR headset called HoloLens, but this is limited to developers. Facebook also revealed an early version of its “holographic optics for thin and lightweight virtual reality” in a research report.

Google launched Glass in May 2014 and retains an enterprise version of the product. It also recently bought North, a Canadian manufacturer of light, natural-looking smart glasses that are similar to Nimo’s concept. Even Amazon is after the smart glasses market and announced a pair of Alexa-enabled glasses called Echo Frames.

While the likes of Oculus, Magic Leap, Microsoft HoloLens and other HUDs or head-ups displays are fully immersive, they need to be connected to PCs or other devices. NImo, Google Glass and Apple’s upcoming wearables are standalone systems that don’t offer such an immersive experience and are built for productivity or notification checking, rather than experiential usage. Nattukallingal claims that such experiences need multiple cameras, high processing power, bigger batteries and that is why they are costly. Microsoft HoloLens costs above $2,000. “These glasses have got too many components inside and they need super high computing to do that,” he added.

He claimed that even standalone smart glasses are not up to the mark when it comes to immersion without the bulky hardware, which is Nimo’s strong point.  “When you put these glasses on, you see a pretty small screen and that’s full of information like single text and small images. The Google Glass failed because of that as user experience was very bad as wearing these feels like additional robotic things without solving any problems just delivering some animations on the small screen,” he adds.

The differentiating factor for Nimo is that it is not focusing on VR-like immersion. “Due to our core focus on productivity, we are optimising the operating system and all our software to match that direction, including the design hardware, and that’s our IP too. And we’re going to innovate more and more into that direction in coming months,” he added.

Against such capital-equipped technology giants who have poured in millions of dollars into developing these glasses with the best technology talent in the world, Nimo Planet cuts a diminutive figure. It has developed its proprietary prototype with just $130K in funding till date.

“Even at the design stage, we take into consideration the cost and how we can optimise the complexity of making the hardware. We also keep a check on how we execute without using too many components in the glass and make it simple— that also help to save a lot of costs and at the same time, the focus on the target use case is the focus,” Nimo Planet founder Nattukallingal.

The company has raised funds from angels like Innov8 founder Dr Ritesh Malik, Ravi Linganuri along with a few US-based angel investors. The board also includes Advisors such as Aneet Chopra, Stephane Kasriel, Malik and Linganuri. The company has also filed a couple of patents— including on the operating system, design and input interface. The company is also in the process of raising $4 Mn as its seed funding round.

Talking about using this capital wisely, Nattukallingal said that the company has built everything in-house and the team is taking a very low salary. He also emphasised that having been in the hardware industry in the past, Nimo had the right contacts for vendors and the focus areas for production.

“That’s the core thing, you should be super focused on what you want to build and to whom, then a lot of unwanted costs would be reduced. And then you need to have the right connections with the vendors, manufacturing companies, etc. to make it happen,” he added.