The biggest highlight of the AGM was the announcement of Google investing INR 33,737 Cr in Jio 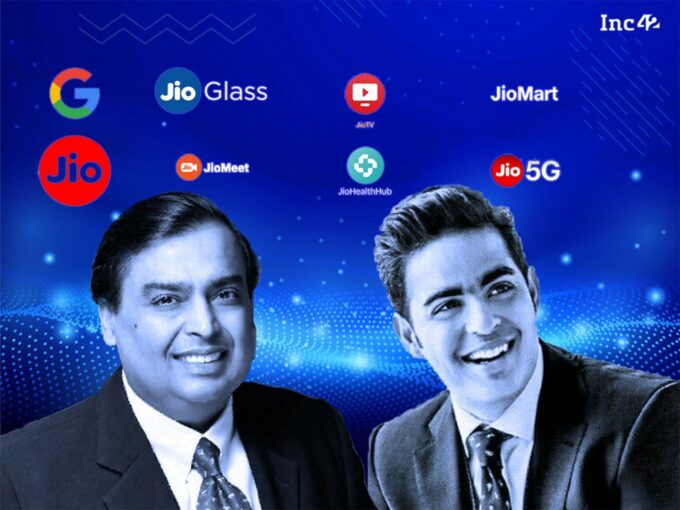 The Reliance Industries’ Annual General Meeting (AGM) has over the years become the flagship tech event in India. Reliance had already signalled its intention of leading the future of India’s technology industry with the launch of Jio Platforms last year to bring the company’s suite of digital products and services under one roof.  And as expected, the 2020 Reliance AGM also saw some of the biggest announcements for the Indian tech industry.

Today, the company commands a firm hold over India’s tech landscape, and besides dominating telecom services, it has major plans in communications, futuristic technologies and 5G.

9 Key Takeaways From The Reliance AGM

The 43rd AGM was headlined by a slew of major announcements around Jio Platforms’ new vision for India, its strategic partners and array of investors. It also announced new applications for consumers and businesses, as well as the progress of JioMeet and ecommerce venture JioMart.

Among the major announcements made by Reliance chairman Mukesh Ambani at the AGM, US-based tech giant Google’s INR 33,737 Cr investment in Jio Platforms for a 7.7% stake was easily the most prominent. Earlier this week, Google had announced that it would invest $10 Bn in India over the next five to seven years. Until a day before the AGM, speculation was rife about a possible partnership between Google and Jio, given the fact that both companies’ offerings are very closely related and often, mutually beneficial. 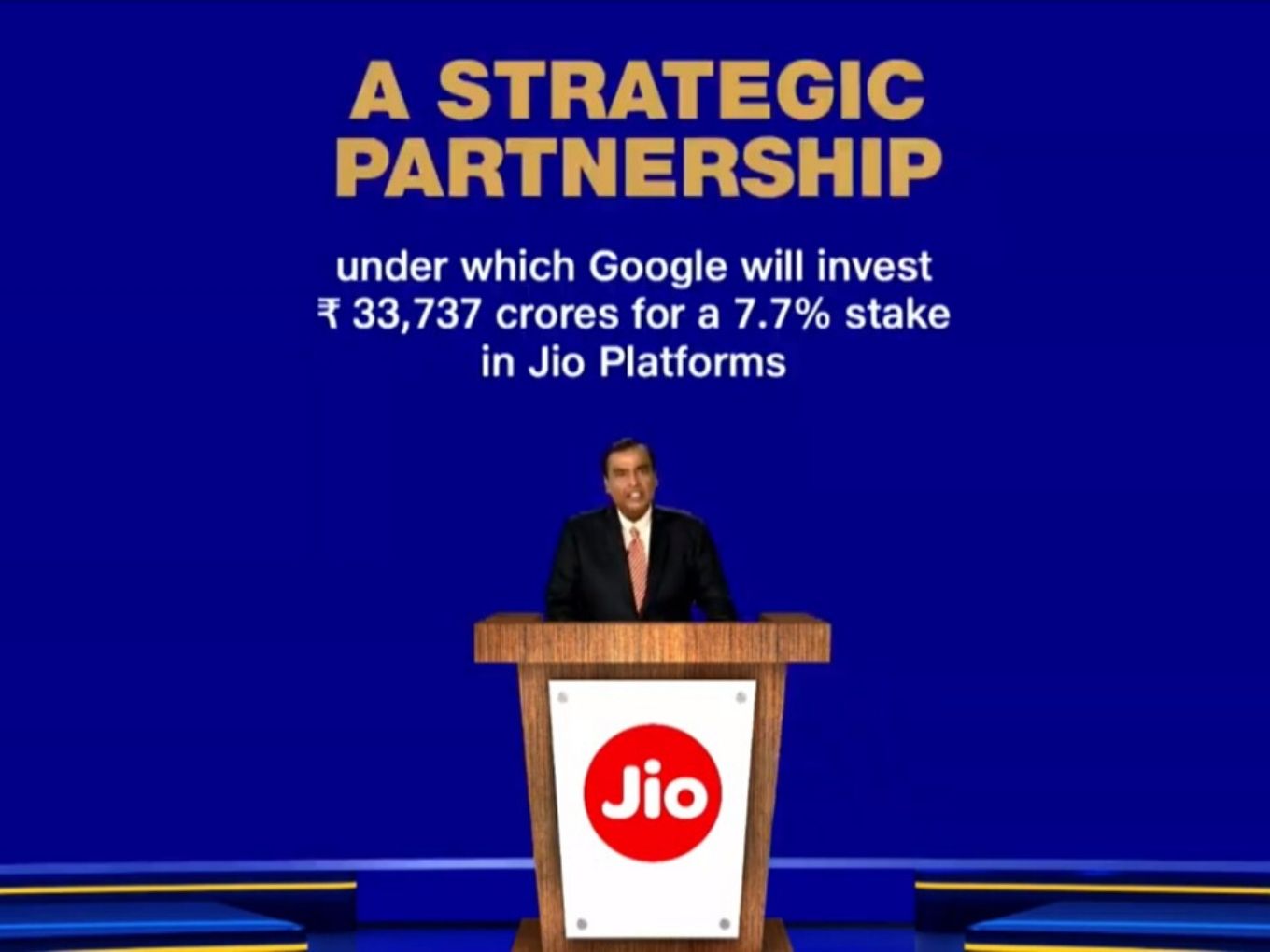 While Google’s vision is to ensure affordable internet access for all, Jio has managed to do the same in India with its low-cost data plans ensuring that 4G mobile networks can reach people living in rural pockets of the country. Today, Jio is the top telecom operator in the country, with 31.7% revenue market share. In many ways, it is an already successful partnership, as the efforts in internet penetration made by Jio have popularised Google services and Android smartphone in India.

Another major announcement made by Reliance at the AGM was about Reliance Jio having developed an indigenous 5G mobile network technology, ready for trial when the country makes the 5G spectrum available. “Completely homegrown, ‘Made In India’,” said Ambani, drawing cheer from the virtual attendees.

Ambani said that a successful trial in India would enable the company to roll out the technology for export. The ‘Made In India’ pitch was particularly relevant, given the current context, where there’s a rallying cry to boycott Chinese equipment and products, after border clashes between India and China in Ladakh’s Galwan Valley last month.

The company announced the launch of JioTV+ at the AGM, which will curate content from various OTT platforms such as Netflix, Amazon Prime, Disney+ Hotstar, Voot, SonyLiv, Zee5, JioCinema, JioSaavn, YouTube, among others, into one app. It will be voice-search enabled. Moreover, the user would be able to voice search, not only for genres but for particular actors, directors, producers, and more. 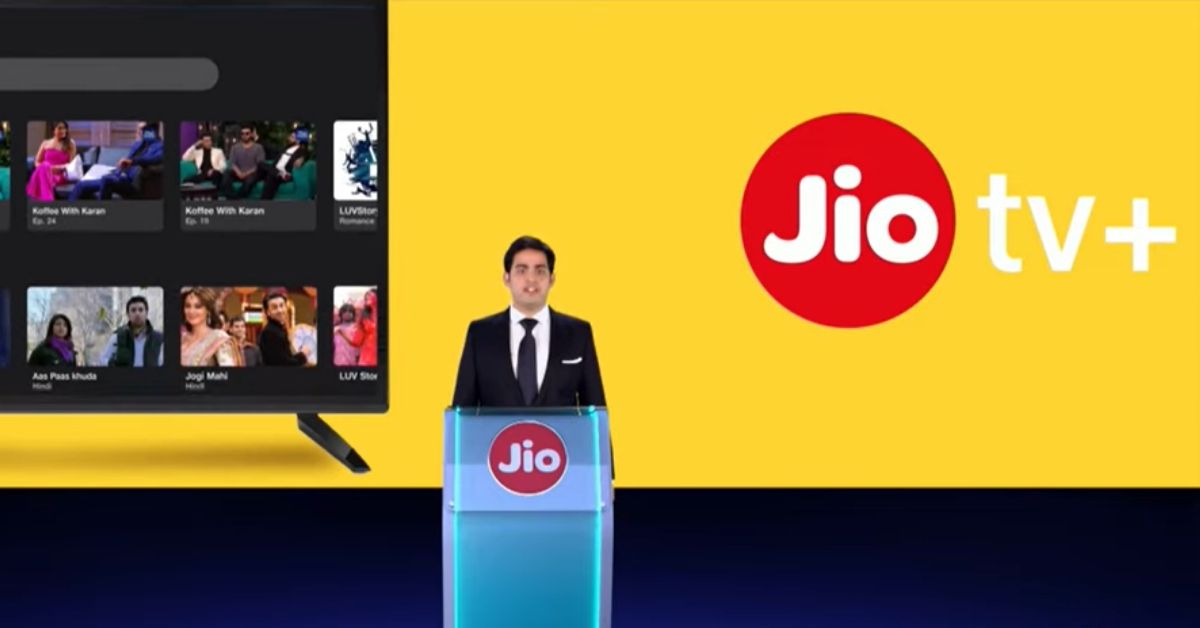 Looking At The Future With JioGlass

Among the products launched by the company during the AGM, the most cutting-edge has to be JioGlass, a gadget which would provide Mixed Reality services to its user. The product, which weighs only 75 grams, can be used to conduct 3D virtual meetings, create holographic content and can turn a normal video conference more interactive. Beyond placing calls, JioGlass will support up to 25 mixed reality applications on launch. 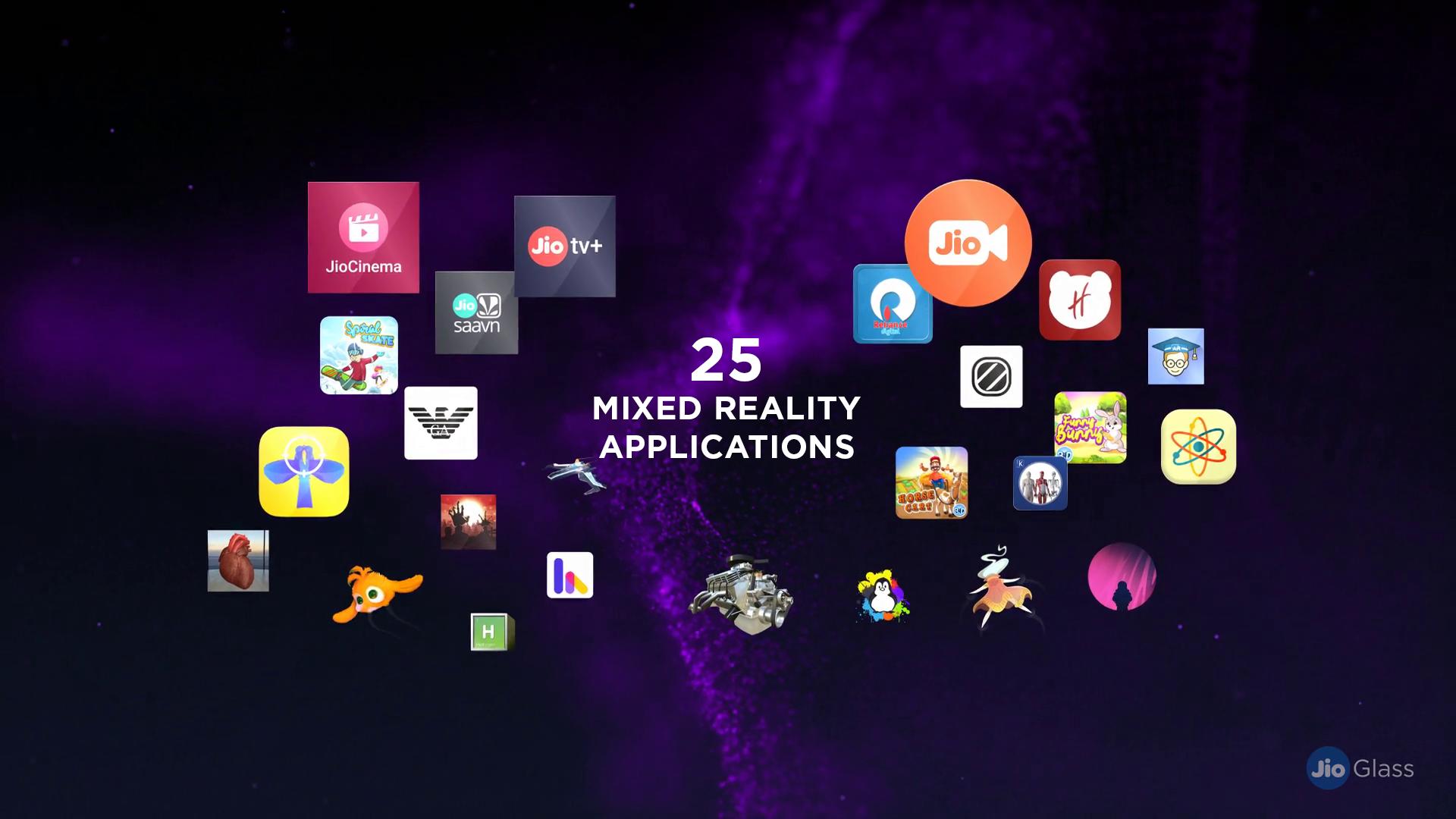 Users can also share presentations on a virtual screen with the JioGlass, and use the technology to have a seamless virtual experience. The company stated that the glasses could be used by teachers for creating 3D virtual classrooms and create a truly immersive learning experience. While a demo for the product was shown during the AGM, its pricing, availability and other launch details haven’t been announced yet.

Ambani also talked about the company’s latest venture, video conferencing app JioMeet. Ambani said that the application had been developed in the last two months and was the outcome of a completely in-house project. He added that the application already has more than 5 Mn downloads in India. Further, with its enviable features, namely, free group video meetings with up to 100 participants for 24 hours, and no paid ‘premium’ versions, JioMeet is rivalling the likes of Zoom, Microsoft Teams, Google Meets and other major players in the video conferencing space.

“Through this partnership, we are confident that we can accelerate the national mission of putting a smart device in the hands of every Indian. As India is standing at the doorsteps of the 5G era, we should accelerate the migration of 350 million Indians, who currently use a 2G feature phone, to an affordable smartphone. Jio is determined to make India 2G-mukt.”

Speaking at the AGM, Isha Ambani talked about the company’s vision of powering digital healthcare during the Covid-19 pandemic, through JioHealthHub, an integrated digital healthcare portal which will enable people to have online video consultations with doctors, securely store and share health records and book lab tests, among a host of other services. Originally launched in 2017, the app has gained renewed traction during the Covid-19 pandemic and the ensuing lockdown, as people have sought online access to healthcare.

The AGM also saw the company launch some new features for JioMart, its ecommerce and grocery delivery business. The company announced that JioMart would work closely with WhatsApp to expand the consumer-base of local kirana stores. Further, Isha Ambani pointed out that the application would evolve into an “omnichannel tech-platform to unite customers, kiranas and producers.” Ambani added that the vast physical network of Reliance Retail would focus on creating a pan-India physical and digital infrastructure, onboarding sellers and merchants and ensuring that the benefits of new commerce are offered to every cog in the supply chain. Ambani claimed that JioMart was receiving more than 250,000 orders every day, and would soon start delivering electronics, pharmaceuticals, fashion and healthcare products.

A significant duration of the AGM was devoted to Reliance chairman Mukesh Ambani’s message to the company’s shareholders. Ambani talked about the company’s finances, saying that Reliance Industries Limited (RIL) was now net-debt free, owing to the strategic stakes sale it had pursued for its subsidiary company Jio Platforms.

The company also announced the Jio developer programme for applications on the Jio app store. Through the programme, app developers can develop, launch and monetise the app.