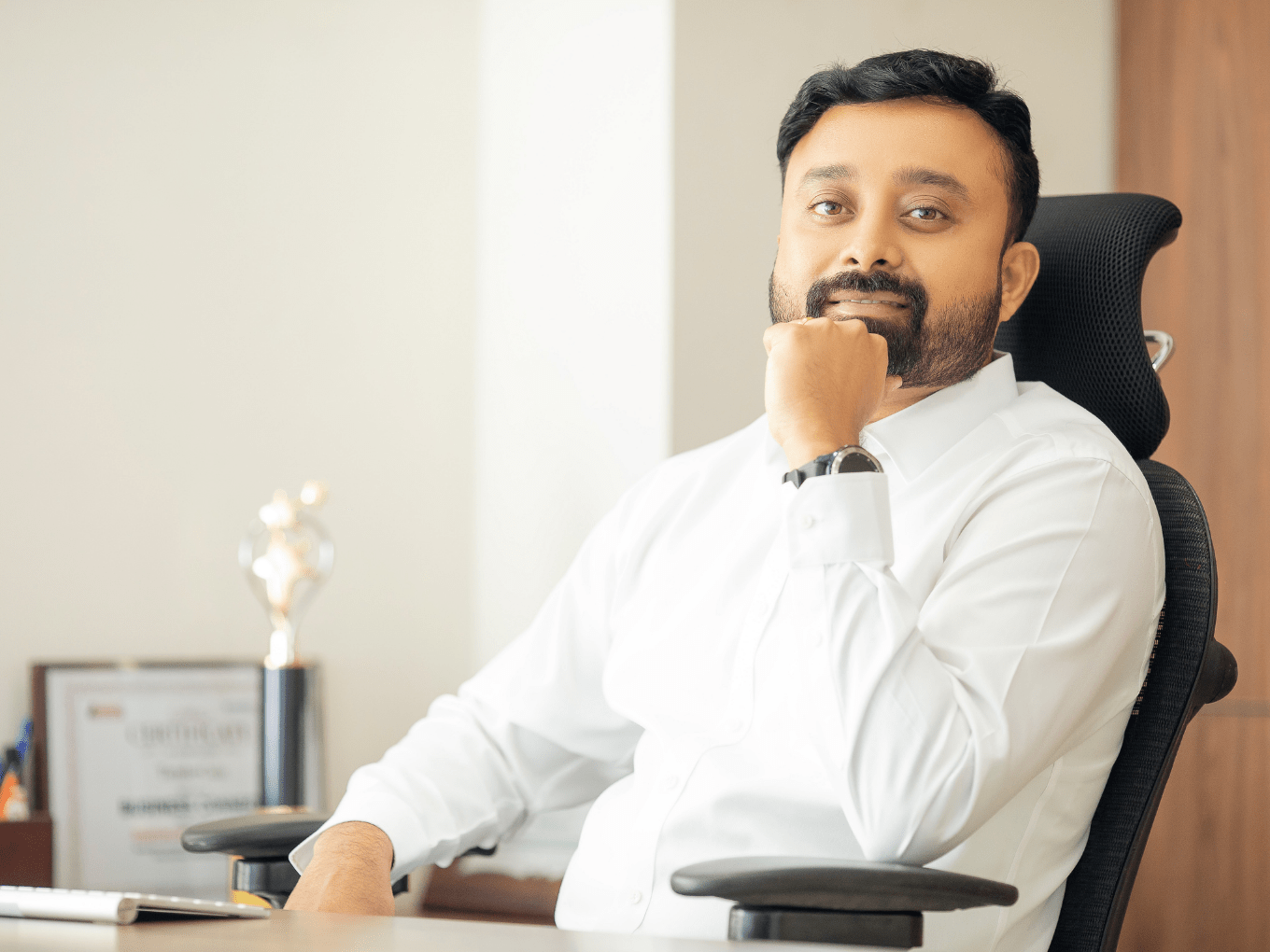 After Nishanth Chandran exited his previous venture E-Billing Solutions (a payment gateway) in 2014, he decided to take a break and travel. During the trip, he visited several local meat markets across the EU and was impressed by their product quality and cleanliness. After returning to India, he set out to introduce similar quality standards and fast deliveries in India.

Back then, India’s meat market was highly fragmented, and people relied on unorganised shops that operated in shabby local markets under unhygienic conditions. Not only was the food quality below par, but the customer experience was also less than satisfactory.

The wheels of change were first set in motion with Bengaluru-based FreshToHome’s entry into the D2C space. Alongside its same city rival Licious, the recently turned first unicorn in the segment, and Nandu’s, Gurugram-based ZappFresh and Chandran’s brainchild TenderCuts, the major players in the segment are procuring and processing high-quality meat and seafood and ensuring doorstep deliveries to eliminate the poor buying experience.

Although the online meat segment has captured only 1% of the total market share, a look inside the market landscape highlights that the opportunity in this area is quite high. The total size of India’s meat market in 2019 stood at INR 3.30 Lakh Cr and is estimated to reach INR 4.6 Lakh Cr by 2024, says a report by market intelligence firm RedSeer. 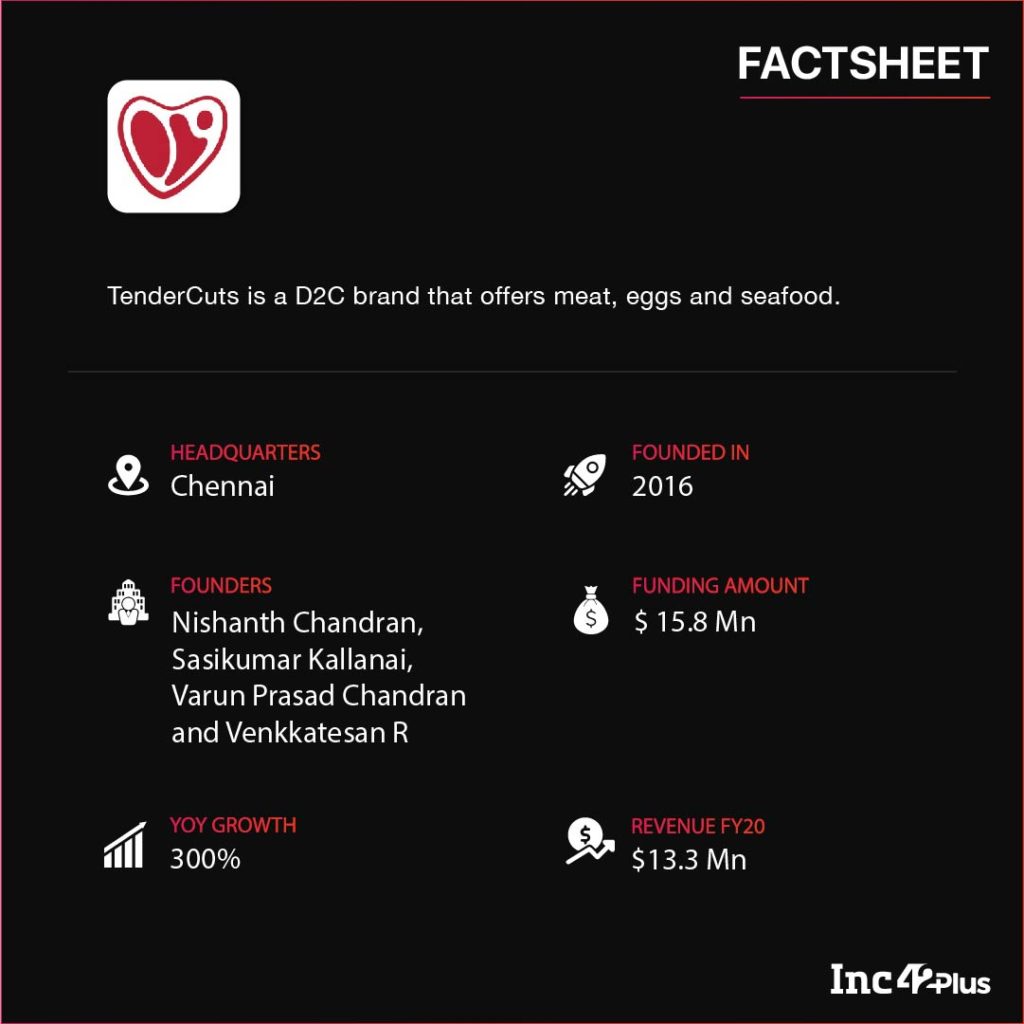 In its early days, Chennai-based TenderCuts used the vendor ecosystem to procure meat and seafood. But the supply often fell short of required quality standards, and there was no way to track if antibiotics had been used. (Experts and consumer advocates are worried about their impact on human health, and many food-producing companies drew flak for using them.)

The D2C brand tied up with local farming and fishing communities to address these quality challenges and procure farm-fresh products. Constant monitoring and solid backward links for procurement helped the startup do away with such usage.

TenderCuts is certified by Eurofins, a Luxembourg-headquartered food, environment and pharma product testing firm and has a host of quality checks in place to test its meat and fish products for 27 antibiotics. It also follows FSSAI (Food Safety and Standards Authority of India) procedures across all its processes and offers halal-certified food items.

The meat brand currently operates in three cities — Chennai, Hyderabad and Bengaluru — and claims to have an average ticket size of INR 550, which puts it in the premium category. It saw an order volume of 2 Lakh in 2020, the company said.

The startup raised $15 Mn in February 2021 and announced its offline expansion in existing and new cities to scale up faster. According to Chandran, TenderCuts plans to launch 100 stores (including the existing 45) by the end of this year and expand to six more cities by early 2022. It is also betting big on the ready-to-cook category and intends to add more regional cuisines to its list.

Earlier this month, TenderCuts elevated three of its high-ranking employees, Sasikumar Kallanai (CBO), Varun Prasad Chandran (CTO) and Venkkatesan R (CTO), to cofounders. The announcement came amid its retail expansion across the country. The company stated that the trio had been involved in several key projects and would now be tasked with scaling the brand further.

Unlike most D2C brands in this space, TenderCuts has built a robust omnichannel presence to enhance customer convenience and cut down on delivery time. It keeps the order ready at the nearest TenderCuts outlet if a customer decides to pick it up in person or makes a doorstep delivery within two hours of slicing the meat as per the order received.

The company says that the meat is sliced after an order has been placed, thus ensuring freshness and food safety.

“An omnichannel strategy has double benefits. It gives us the convenience of reaching our customers through different channels and gives our customers more transparency that builds trust in the brand in the long run,” said Chandran.

The startup raised $15 Mn in February 2021 and announced its offline expansion in existing and new cities to scale up faster. According to Chandran, TenderCuts plans to launch 100 stores (including the existing 45) by the end of this year and expand to six more cities by early 2022. It is also betting big on the ready-to-cook category and intends to add more regional cuisines to its list.

TenderCuts’ endeavour to stick to global quality standards through tech-driven systems and ensure an optimum reach through a hybrid format and an aggressive expansion drive led to a big jump in revenue. Total revenue stood at INR 100 Cr in FY21 as against INR 35 Cr in FY20, a 300% YoY growth.

The consumption of poultry, seafood and more is also rising consistently over the years. In 2020, 3.9 Mn metric tonnes of poultry meat was consumed, a 5.4% increase from the previous year. With more than 70% of Indians aged over 15 being non-vegetarian, according to a census report, the D2C brands operating in the segment have a sizeable demographic to cater to.