“My father wanted to grow his business back in the 1980s by raising debt. And I would see him go from bank to bank, carrying three suitcases with him to apply for a simple loan.” That childhood experience impacted Mukesh Bubna’s lifelong relationship with banking and debt.

As luck would have it, he decided to work in this sector for two decades, including 18 years at Citibank in Asia. In those years he saw, from close quarters, the challenges of banks and how processes were working. A conference in Paris in 2007 about the future of banking, introduced him to the concept of P2P lending through Zopa – the first peer-to-peer (P2P) lending company in the UK, as well as globally.

He recounts, “They started in 2005 and were a simple craigslist.com for finance. But that left a small mark in my head. Fast forward to 2014, I was travelling between cities when I was with Western Union. In the US, I saw advertisements for this company called LendingClub. P2P lending had become big.” 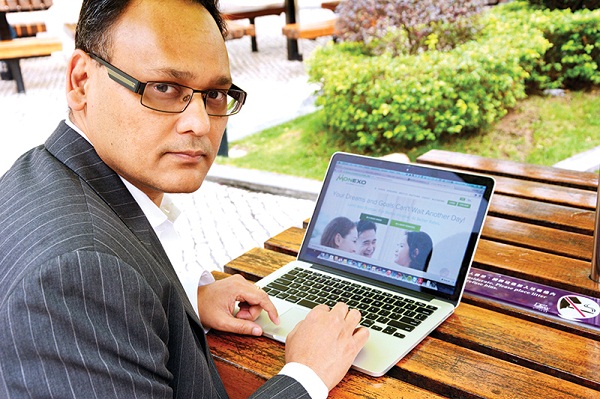 It was then that Mukesh started doing serious research on P2P lending. Having seen the problem at a banking level, he realised that processes were slow, the technologies that were made in the 90s did not allow one to deal with the changing profile of customers, and that even if bankers might want to approve certain customers, they were restricted by guidelines. Since he could not change the processes in-house, he quit, and thought of ways to bringing P2P lending to Southeast Asia.

Joining hands with two co-founders – Sonal Bengani and M. Sundar, he launched Monexo in HongKong last year. Last month, Monexo made its way to India and, with it, the dots in Mukesh’s journey have joined back in perfect fashion, coming full circle to the place where it all began.

A Marketplace For Money

Registering as a borrower or a lender on the platform is a matter of a few simple clicks on a mobile. The startup focusses on the three Ds – digitisation, data-driven decisions not judgemental decisions, and democratising of the lending process. A lender can easily understand the percentage of money which he can earn while lending and can choose to whom he wants to lend his money.

Adds Mukesh, “Monexo is a platform where we are bringing people together just like Uber and Flipkart. These are marketplaces and that’s what we want to do with financial services.”

Suitable checks and balances have been put in place to keep out money launderers. As a customer on the lending side on-boards, the platform does his KYC and he has to submit his PAN card, a bank statement or cheque copy. This ensures that only funds come to the platform and he does not become a front for someone else. An Anti-Money Laundering (AML) check is well in place.

The same goes for borrowers – s/he also has to go through KYC, AML, and credit scoring. In the credit scoring section, which is a data-based decision process, he can get a rating from  M1 to M8, with M1 being the highest rating. The best score can get him  mortgage rate as low as 13%.

The technology in place ensures that customers can easily upload documents themselves, provide electronic signatures, thus negating the need of physical signatures or to and fro of documents, and can get approvals in one, one-and-a-half hours as compared to the days or weeks taken by banks.

While in Hong Kong, Monexo gave loans against rental income and salary loans, in India the startup’s product portfolio consists of personal loans, professional loans, and loans to SMEs.  SMEs would be forming a large base of customers given the government itself has estimated there’s a gap of $150 Bn loan requirement, says Mukesh. 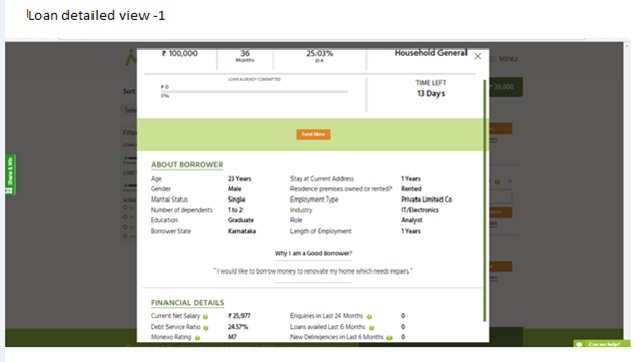 The personal loans given by Monexo range from $749 (INR 50K) to $7.4K ( INR 5 Lakhs). With the credit card rate in India at 44%, Monexo is targeting users who are paying this high interest rate. For SME and professional loans, the figure goes up to as high as $44K (INR 30 Lakhs).

Banking On Data To Provide Debt

Monexo entered India in September this year and already has a few hundred lenders registered on its platform where borrowers can avail loans at interest rates ranging from 13% to 30%. It’s a risk-based pricing. It looks beyond the Credit Information Bureau (India) Ltd (CIBIL) data and has almost 600 data points to evaluate the creditworthiness of the borrower.

There are no joining fees for the lender and he also doesn’t have to pay anything till he lends and Monexo recovers his money. The startup earns 2.5% from the lender once it collects the interest for the lender, and if it doesn’t, it earns 0%. On the borrower side, it charges the borrower 2.5% on the day the loan is credited to him.

Although Mukesh did not disclose the loan amounts disbursed till date, he feels very hopeful about the Indian market. He adds, “While India is much digital than Hong Kong, yet suffers on account of poor infrastructure of the bandwidth. Also, when compared to the Hong Kong market, the market here is less liquid.

Indian lenders are different; they think and ask more questions. However, in Hong Kong, interest rate is 0.1%, fixed deposit is 0.9%, so lenders are always on the lookout for investment products which are giving yields. While in India saving rates are higher but trajectory of Indian rates will be downwards. So lenders will start looking at more and more products such as P2P lending which are more liquid.”

This is one of the factors Mukesh is pinning his hopes on as Monexo aims to target $44 Mn (INR 300 Cr) business in the first year of operations. 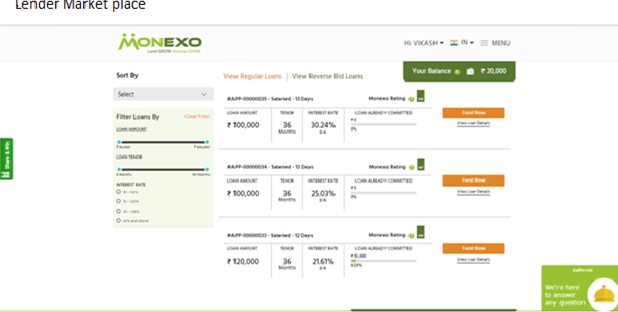 For now, the startup is based out of offices in Bengaluru and Chennai with around 15 people, and is looking to expand and raise more money to scale up its business in India and other Southeast Asian countries. After Hong-Kong and India, Singapore, Philippines, and Indonesia are expected to follow suit. For the moment, however, Mukesh’s target is how to build a trustworthy, sustainable brand, and how to have the best data science.

As per the Peer-to-Peer Finance Association (P2PFA) data, in 2015 alone, around 20 new online P2P lending companies were launched in India. At present, there are around 30 startups in the domain including Kiva.org, Rangde.org, Milaap.org, i-Lend, i2iFunding, Lendbox, Faircent, Lendenclub, Loancircle, Loanzen, and Capzest.

With the growing number of P2P players, the RBI also released a consultation paper on its website proposing guidelines for P2P lending platforms in April. Mukesh welcomes the paper stating that at Monexo, they liked all the key points except one.

He added that they have suggested that all P2P platforms should report their loans and delinquencies in the bureau. He explains, “If they do not, then a parallel economy will come up and a bubble will be created.”

But as far as completion is concerned, he is unfazed. He states that compared to other P2P platforms, Monexo is the only company that has partnered with ITSL (IDBI Trusteeship Services Limited). What the partnership allows it to do, is to disburse the funds very rapidly to a borrower.

While the next 12 months are all about scaling up in India and Hong Kong, going forward, the startup aspires to be Southeast Asia’s leading P2P lending company.

And in that direction, Mukesh feels the biggest challenges would be the P2P players themselves and consumer education.

He explains, “Roadblocks to P2P will be industry players themselves. If two players do something wrong, the remaining 40 will suffer. That’s why we appreciate the regulations coming in now such as the minimum $298,844 (INR 2 Cr) capital requirement for platforms to operate. After all, it’s a capital-intensive business.”

To combat the aforementioned challenge, Mukesh is making efforts to form a P2P association where the players will talk about self-governance, self-regulation and talking to regulators about proactively formulating guidelines for the industry.

He also mentions that consumers do understand the whole concept but have misconceptions about it – such as anyone who takes a loan from P2P is not creditworthy. Which is what the startup aims to remove through consumer education webinars, partnerships, and online channels.

As far as the future is concerned, he strongly feels that India can go the exact way of China. There are, of course, riders attached.

“Four things need to happen – players need to be responsible, regulators need to see how it can solve the problem of credit in India, Digital India needs to scale the way it is expected to, and consumer education needs to happen. I believe the moment the guidelines are passed, it will be a big push for the P2P industry.”

When P2P lending started in China in 2005, as per Mukesh, it was only a $2 Mn industry. Today, it has grown to become a $164 Bn industry and is still less than 1% of the total balance sheet or lending books in the economy. India today has only 10% of consumer debt as a percentage of GDP. So there is a huge opportunity here as consumption grows with a younger population constituting forming a major bulk of the population. More so, SMEs are always on the lookout for less cumbersome, faster solutions with lower rates and lower transaction costs.

Added to that is the fact that a downward pressure on interest rates is making people think about alternatives to increase their wealth. With the government slashing off interest rates on small-savings schemes, including the Public Provident Fund and Kisan Vikas Patra this year, it is an indication that high interest rates in India might not be sustainable in the future. Hence, the demand for P2P lending has a potential to receive a huge fillip in the future.

P2P lending can become the third leg after banking and NBFC depending on how it evolves and whether all players play responsibly. However, with consumer education being one of the biggest challenges in India, it will be interesting to see how Monexo can change consumer mindset about the creditworthiness of the P2P lending process as well as differentiate itself from other players in the space.