At present, the company has tie-ups with 150 US colleges for nearly 1000 STEM courses

India is second only to China in terms of international student enrollment in overseas colleges and universities, according to QS World University Rankings, but Indian students have a mountain to climb even if they are ever admitted to a college abroad. That’s because student loans are often daunting, to begin with, and the prospect of finding no suitable job after college and having the burden of loans scares away most students.

“These are smart, hard-working students who got in the best programs and have a great future ahead. Yet, the education loans they avail of are at interest rates twice as high as their American peers,” said Vaibhav Singh.

The Leap Finance cofounder is positive that technology can solve this too. While there is no dearth of lenders for students in terms of personal loans or even education loans in India, not many digital lending startups are focussed on higher education. This is where Leap Finance is looking to carve a niche with low-interest rates thanks to its full-stack underwriting model.

Founded by Singh and Arnav Kumar, Leap Finance began operations in August 2019. It has now secured seed funding of $5.5 Mn from Sequoia Capital with the participation of angel investors such as Bhupinder Singh, founder and CEO, Incred and Kunal Shah, founder, Cred among others.

With offices in Bengaluru and San Francisco, the focus of the company is to bring financial access to Indian students pursuing higher education in international universities and colleges.

Talking to Inc42, Kumar said the company will use these funds to hire aggressively for its technology team in Bengaluru and the capital team in San Francisco. The company aims to enable 1000 students for the coming Fall 2020 courses.

In simple terms, Leap Finance is a financial services platform for students seeking loans to study abroad. But the difference is that it’s a direct lender and uses a proprietary underwriting technology.

At present, much of the education-related lending in the country is also governed by the credit score or is in lieu of guarantees or securities. Leap Finance is offering unsecured loans. So how is it able to afford these loans? Singh said the unsecured loans are disbursed in US dollars instead of INR.

“Essentially, we are financing the students in the US because, at that point, the student needs foreign currency, and borrowing in Indian currency is more expensive than the foreign currency. You don’t only get the benefit of FX but you also get a substantially cheaper loan,” Singh explained.

Another big advantage is that the company offers better interest rates than its Indian peers, who charge a rate between 15% and 30%. For Leap Finance, the interest rates right now are around 7.9%, which is half the battle won in many cases.

The Focus On STEM

Leap Finance provides loans to cover the full tuition cost, stay and incidentals. In markets such as the US, health insurance is an essential part of a student’s living expenses. Even if colleges don’t include insurance in their tuition fees, Leap Finance takes up the charge. It has tie-ups with 150 US colleges for nearly 1000 STEM courses.

So why the focus on STEM courses and why only US? Singh believes STEM courses are the most active streams in India. “Almost 90% of the total students going abroad opt for this, so it was a clear choice for us. We may add additional courses over time, as need be,” he added.

As for choosing to begin with the US, Singh has good things to say about Canada, Australia and UK in terms of growth, but again said that the most active market is the US. Hence, it was a clear choice as a starting point.

In terms of repayment, the company follows a similar model to other players, where students have to pay some part of the loan during the course and in monthly instalments after graduation, along with a buffer for the job search.

Singh also talked about building the credit behaviour for the students, saying that many students who go abroad, decide to settle there after finding jobs and credit behaviour is an important metric in international markets. He added that students are then able to build credit management habits, which are beneficial for them to further their expenses, which does not happen with loans from traditional banks. 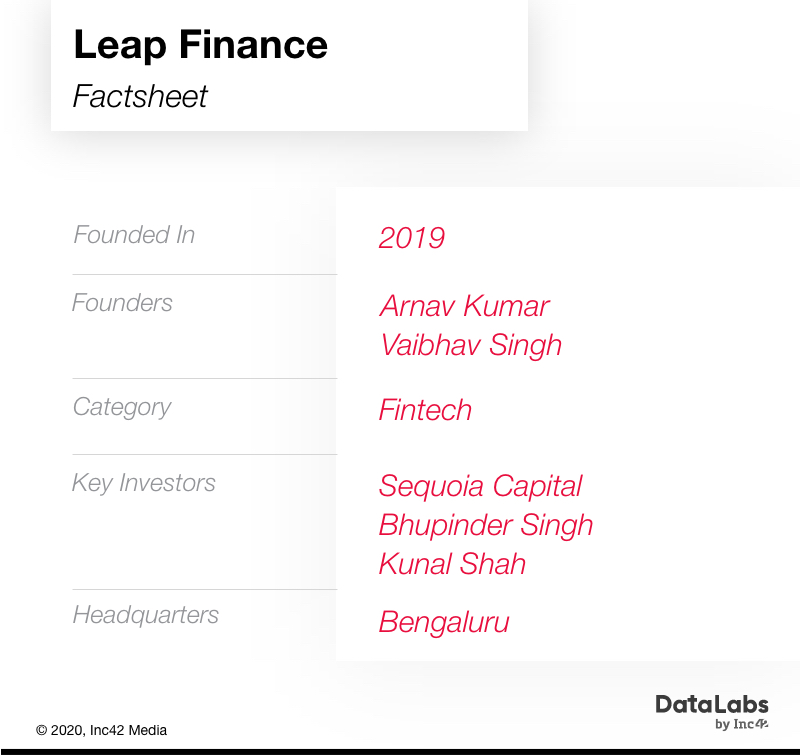 Debt At An Early Stage: Is It Risky?

In India, lending tech has been the flavour of the season for the past few years, and it was no different in 2019. There is no stopping the up-and-coming businesses in the lending space, with electronics companies joining the hordes too. But the reliance on NBFCs or venture debt is a big hurdle.

Leap Finance is confident enough in its differentiated product that it compares itself to players in the international lending market rather than Indian companies. This can also be attributed to the decades of experience behind the founders.

Singh has 12 years of experience working with big banks and in the fintech space, he has worked with Capital Float and InCred. For Kumar, he has worked in derivatives structuring with Deutsche Bank. Kumar co-founded GoZoomo, a used car marketplace, and went on to work with SAIF Partners, which has helped them bag investors in the US.

That’s where the confidence stems from. That and the fact that it does not have to concern itself with the liquidity issues in the current NBFC market in India.

Singh said that while Leap has begun with the US, it will quickly expand to other countries, so the funding and liability strategy has to be global as well and cannot be rooted to the Indian venture capital market. Hence, the company believes that its liability strategy, which is leveraging global capital markets and global debt providers, strongly backs its ability to actually fund these loans. Kumar would be more than happy if the company is able to give its investors a healthy yield in the global market, where the conversation is very different than the Indian debt conversation.

“The global debt market stands at $17 Bn, which is currently earning in negative. There is a supreme hunger in all developed markets to get quality assets, which are getting reasonable yield,” he said.