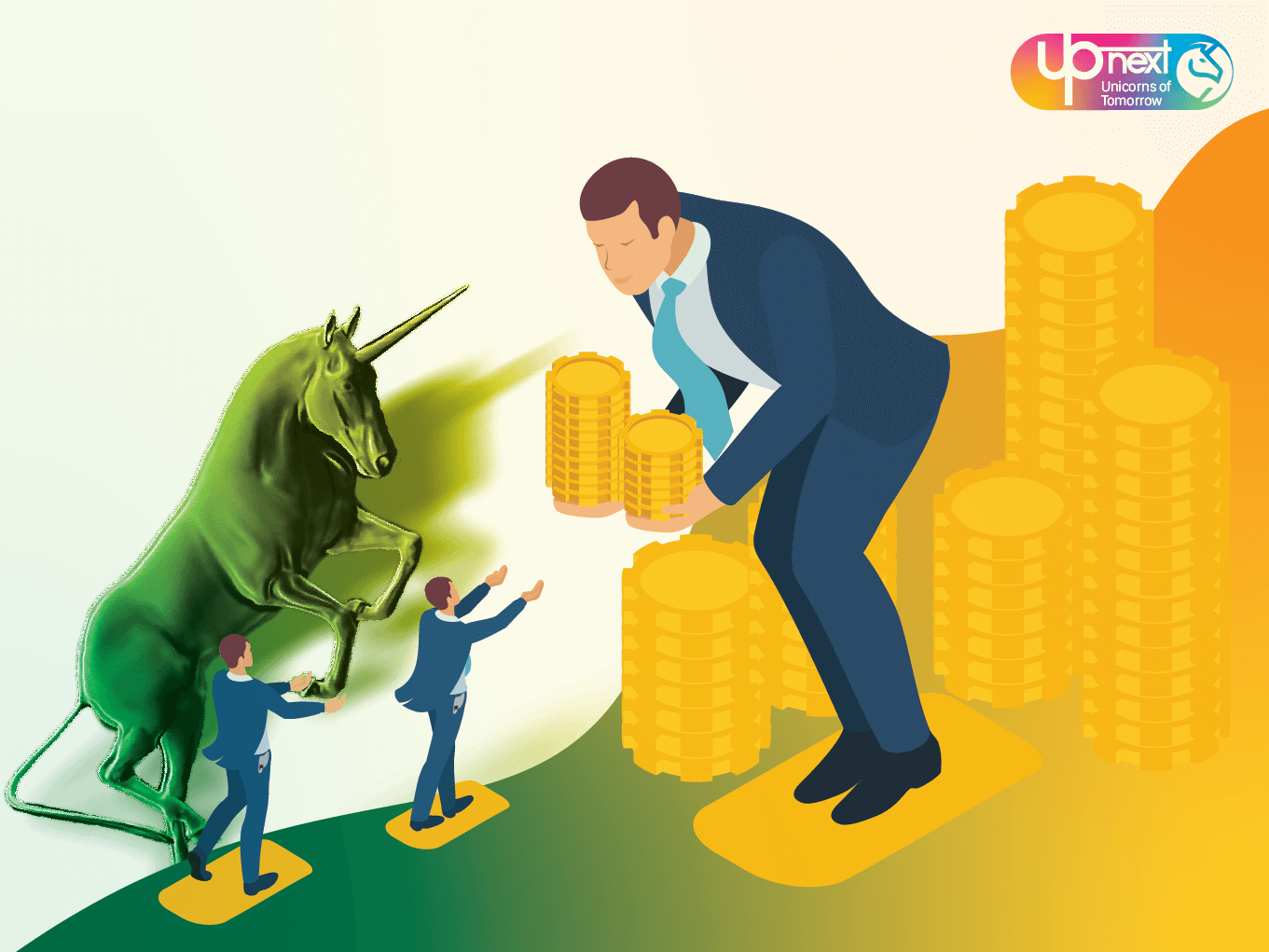 As SME and consumer lending market expands and the addressable user base grows, the reliance on tech is only about to get higher, Capital Float said as it looks to make an entry into the unicorn club

To celebrate India’s rising startups, Inc42 is profiling a new soonicorn every Friday in the Inc42 UpNext: Unicorns Of Tomorrow series. For the next few months, we will be speaking to founders and cofounders at these potential unicorns and shining light on their journeys and growth stories. This time, we take a look at SME lending platform Capital Float.

“In this digital age, it doesn’t really matter if you are in Canary Wharf or the Caribbean; there are opportunities waiting to be grasped by entrepreneurs,” – Richard Branson.

Branson’s words are deep. And who better to understand this than Gaurav Hinduja and  Sashank Rishyasringa, the founders of Capital Float? Now gradually paving its way into the Indian unicorn club, the foundation of the digital lending startup was laid at a time when terms like “digital lending” and “fintech” were barely in the parlance.

Initial reactions from investors to the idea of lending were sceptical, and many felt that lending would remain a physical, analogue business for a long time.

But the duo was undeterred. ‘Digital’ was not just a term, but a revolution and they put their faith into it long back in 2013. As Hinduja recalled, in 2014, Capital Float only had a physical presence in a handful of Tier 1 cities. It was then they received an application from an SME in Bhilwara who was a mobile phone seller on a major ecommerce site.

“We started him off with a relatively small INR 10 lakh loan, which grew to an INR 1 Cr credit facility as the business was able to scale rapidly online with the help of our capital. This was an early demonstration for us of the power of a digital-led model,” added Rishyasringa.

If an idea makes one an entrepreneur, the validation of that idea add wings of success to it and there was no turning back for Capital Float after this. Over the last six years, they have disbursed INR 8,500 Cr ($1.2 Bn) to over 0.5 Mn customers in 300+ cities, across SME and consumer segments. Also, they have raised over $110 Mn in equity funding, over $300 Mn in debt funding, and originated over $250 Mn via its marketplace (co-lending) model. Here’s a brief about the company.

In 2013, the duo started their entrepreneurial journey with a vision of disrupting the entire small-ticket retail lending space, across SME and consumer categories. This “missing middle” segment, comprising small businesses, self-employed individuals and salaried professionals, is now estimated at being a $1 Tn market opportunity. The idea was to tap the SMEs first, diversify into consumer space later and build a common technology and data-driven credit underwriting platform that could originate small-ticket loans across the “missing middle”.

The first phase went in meeting 500+ SMEs; sourcing, underwriting and issuing the first 100 loans themselves, facing challenges and finding insights, among others. They work around creating quick and convenient short term SME loans, adopting a “low-and-grow” approach to test their early credit models and build relationships with customers. They also tried to partner extensively with entities who were close to SMEs and their needs, such as financial advisors, suppliers, buyers, as well as ecommerce platforms.

“These channel partnerships allowed us to source customers efficiently and scale early on, and also extend our reach,” said Hinduja. Fast forward to 2017, they entered the consumer financing space and today Consumer represents 50% of their monthly originations.

Inorganic But Effective: The Walnut Deal

The Walnut acquisition proved quite a success for Capital Float. “Through Walnut, we were able to crack the puzzle of evaluating digital data to offer loans to new-to-credit customers,” said Rishyasringa.

Currently, 80% of Walnut’s users are in the age group of 18-34 years while over 30% of Walnut’s users are new-to-credit customers. The acquisition also enabled them to build a strong consumer-centric, mobile-first technology DNA within the team, on top of their existing expertise around SMEs and building core lending infrastructure.

“We are now in the process of transitioning from a pure-play lender to a cohesive digital financial partner for consumers as we help consumers track expenses, plan their finances, split bills, prepare for financial emergencies, shop on online platforms such as Amazon through our checkout finance product and get personal loans via Walnut,” Rishyasringa added.

Apart from this, the company also boasts of its ability to launch a new product in less than 2 weeks,  and expertise around underwriting self-employed and thin-file individuals. Also, their experience with two-sided platforms in the SME world directly drove them towards opportunities in Consumer. For example, the Amazon partnership began on the SME side but today contributes to a large share of their consumer business, offering approved loans within milliseconds on the Amazon platform.

In 2013, what gave the Capital Float co-founders the confidence was a set of 4 defining trends at the time — rising digital connectivity, emphasis on building financial infrastructure, focus on data analysis and increasing acceptance to new credit sources both from private and government corridors.

But they were not alone. A number of other lending startups in the SME and consumer space have started cropping up like LendingKart among others. Capital Float, although, seems prepared for this. The company created differentiation for itself at many levels. Here’s a brief overview.

Being active in both SME and Consumer Finance domains, it allows Capital Float to capture a larger share of the retail lending opportunity. Experimentation is encouraged as a culture, with the right guardrails to ensure risk is also managed, thus bringing in innovations without spending a hefty amount on R&D. The ‘90 second loan application’ was one example of this.

As Hinduja explained, they frequently engage in outreach to SMEs via strategic collaborations with business partners in smaller towns such as Unja, Narasapura, etc, while collaborating with industry bodies like CII and Assocham to present their financial solutions to specific SME segments. Also, executing industry/sector-specific marketing campaigns and content campaigns on pertinent topics like GST has proved impactful.

Capital Float can process hundreds of applications for its online checkout finance product in milliseconds. Its technology architecture is built on a robust API based platform, which helps it to integrate with diverse partners within a very short turnaround time. It also built its own lending stack which includes Loan Management System (LMS), Loan Origination System(LOS), and Decision Engine (DE) which is extremely unique for a fintech. This has led to higher efficiency in processes and quicker decision making.

Further, from an approach perspective, it uses automation in three areas:

As Hinduja explained, on the SME side, their algorithms have reached an inflexion point after 5 years of data enabling them to undertake fully automated SME loans. On the Consumer side, alternate data such as ecommerce data and SMS data has enabled them to underwrite new to credit customers. “We have made major investments into collections in the past 1-year blending tech, data, and people, which is key to fintech lending and has helped us design an industry-first early warning signal system. We currently have live models using traditional regression techniques, gradient boosting and have AI live for image recognition,” he added.

All the above has been supported by adopting an innovative funding model comprising of co-origination with banks, securitization with HNIs and family offices, on-book lending, etc.

At each level of investment, Capital Float consolidated gains from the previous round of investment and set the stage for the next phase of growth. “For instance, post our Series B raise, we focused on achieving scale with our existing SME finance products while also building the first of our co-origination platforms,” explained Rishyasringa. He added that post Series C, they focused on deepening their SME business in terms of cities and partners, while starting to scale up their newer consumer business.

Fighting Challenges And Growing Ahead

The liquidity crunch post IL&FS last October was one of the severe challenges faced by most NBFCs in the country. Many shut down, many faced consolidation, but there were few who didn’t let their guard down including Capital Float.

“We adopted a 360-degree approach and opted for four key strategies to manage the impact of NBFC crisis.  Despite the overall slowdown, we have been able to originate over 800 crores of loans this year, clocking about 100 crores monthly. We have also been able to raise 1000 cr of debt capital on our balance sheet, 70% of which has come from banks, ” said Hinduja.

Currently, Capital Float is working on consolidating its prior investments in technology, while increasing its investments into core products. For example, on the SME finance vertical, they’re starting to deliver a fully tech-driven real-time experience to customers and providing instant approvals on most loan applications. Simultaneously, they’re focusing on scaling consumer finance vertical to small cities and new-to-credit customers.

Going ahead, it aims to accelerate Walnut’s evolution into becoming a financial partner for the unbanked and millennials and strengthening their consumer finance vertical. Overall, the focus will be to continue to build digital solutions that deliver exceptional customer experience using the data-based underwriting models.