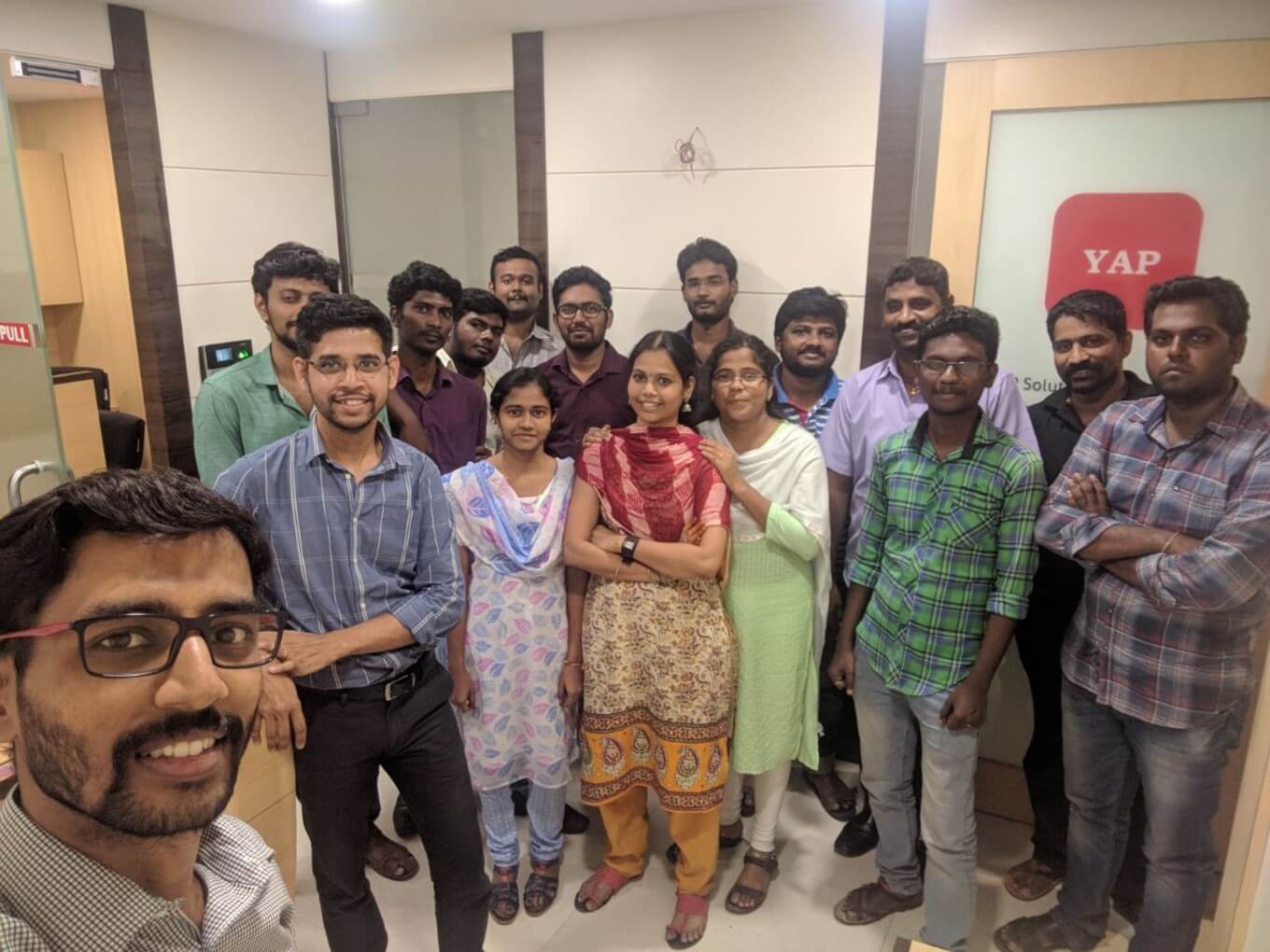 It is backed by angel investors like Kunal Shah, Amrish Rau, among others

Ed Koch, an American lawyer, politician, and movie critic, once said: “In action, be primitive; in foresight, a strategist.” The journey of API based platform YAP could be said to be the same. Founders Madhusudanan R, Muthukumar A and Prabhu R exemplify the Koch ideology in the most relatable manner.

“We incepted YAP in 2014. This was the time when the only digital payment instruments people were aware of included the likes of credit/debit cards, IMPS, USSD, RTGS, NEFT, and digital wallets. While the traditional banks and businesses wanted to reinvent and seen as digital savvy, but they don’t know how to do that efficiently and effectively,” says Madhusudanan.

YAP was thus started as an idea to help businesses work with banks more efficiently. In the last five years, the startup has grown into a full-stack API based platform that helps companies to roll out their own payment products rapidly. It has operations in India as well as Singapore, Philippines, Indonesia, UAE, Egypt as well as other key markets in Asia Pacific and Middle East Asia.

The modular mobile-first API banking platform is backed by leading banks including Yes Bank, DCB Bank, Equitas SFB, SBM Bank and allows companies to rapidly develop, test, iterate their own branded debit, credit products as well as prepaid accounts. It even claims that a fintech product can go live in as little as 3-4 days and monetises for every API hit or in case of financial transactions, for every transaction processed.

“We are helping 200+ companies manage their payment products more efficiently with our API platform. 15 banks are live and transacting, over 50 Mn transactions and $2 Bn has been processed in the past year. We intend to grow our reach to 500 fintech companies and 25 banks in the coming year,” he adds. 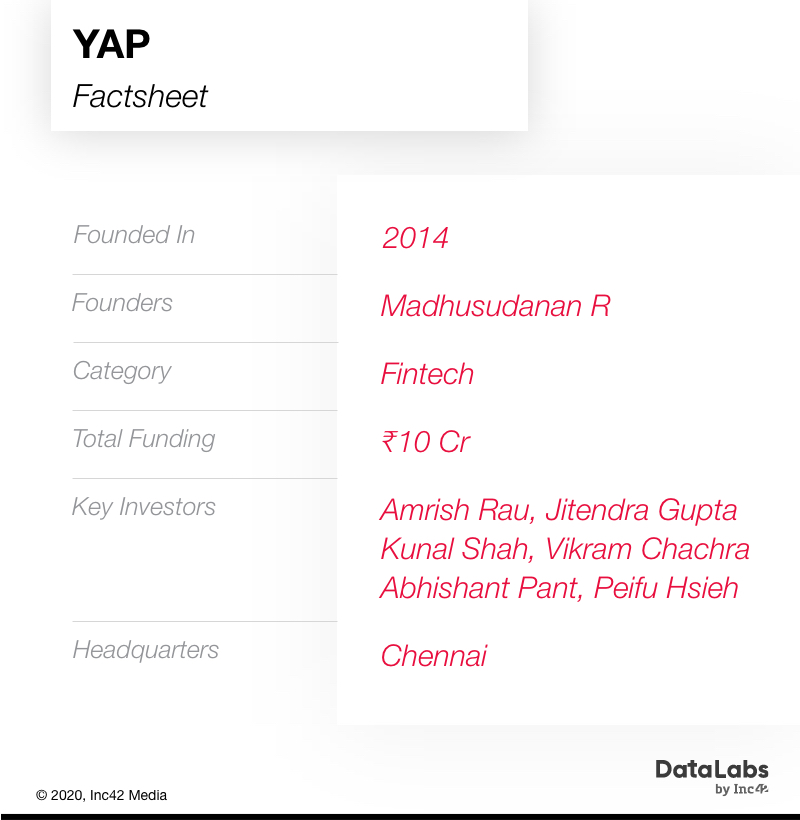 Taking The Cue From Lego To Build “Lego Banking”

Madhusudanan and other cofounders spent a significant part of their career in banking and payments industry working with brands like Visa, Citibank among others. “Our role at Visa gave us a global perspective in terms of what is working in the markets and you are also able to relate to the local businesses that are running around you,” said Madhusudanan.

The founders realised that while everyone wants to have a share in the digital pie, it was difficult to convince both the banks and businesses to jump on an entirely new digital strategy.

“Internally, we term ourself as a Lego banking platform. The pieces to assemble remained the same, its how you assemble made the difference. So we piece together different bits of banking together, yet delivering entirely different solution every time, in line with the needs of the banks and businesses together,” he adds.

The results speak for themselves. YAP now has a clientele including the likes of Ola, Cred, Bank Open, Niyo, Redcarpet, Slice and many others who have opened new accounts, issued and processed payments and co-created new products.

YAP uses an amalgamation of AI, machine learning and data analytics in the backend. The YAP API engine follows REST-based architecture (Representational State Transfer), which is a fairly well-supported standard and can be accessed by a common interface such as browsers or communication protocols using HTTP standard methods.

Developers can enable simple functions such as balance checks and wallet top-ups using the API engine. This enables customers to perform these tasks with ease and fintech products can even customise features based on the customer’s capacity to pay for them.

Regulatory Concerns For Neobanks In India

India is poised for exponential growth in digital payments over the next few years. A KPMG report on the Indian fintech market said the evolution of mobile payments has led to a boom in the number of merchants adopting digital banking.

This shift can be attributed to driving factors such as robust payment infrastructure, the evolution of form factors, availability of structured data, the shift in consumer behaviour and the government’s vision of transforming India into a cashless economy. Also, UPI has created a global benchmark for India in the fintech space, making India an attractive opportunity for global players.

And though neobanking as a concept is new to India, there is no dearth of players trying to broaden the customer base and increase awareness in this segment. The likes of Namaste Credit, NiYO, SBI YONO, Kotak 811, Hylo, PayZello, InstaDApp, 0.5Bn FinHealth (YeLo), Forex-Kart, Walrus, Epifi, Neo-Bank, Amica, Finin.in, RazorPay X among others have already been gaining significant attention from consumers, industry and investors.

According to Madhusudanan, the most successful neobanks from the US and Europe are looking at different ways to enter the Indian market, as India’s vibrant payment ecosystem and low-cost data access make it a compelling opportunity.

“In a large market like India, there is enough space for a few players to become large institutions. However, it entirely depends on the go-to-market strategy and the access to capital the neo banks may be able to deploy. Neobanks can become the glue for a number of fintech ideas to be executed at scale, thereby collaboration is the only way forward.”