How Earphone D2C Brand LoopAudio Is Competing With boAt, Noise & Co By Choosing Function Over Form

How Earphone D2C Brand LoopAudio Is Competing With boAt, Noise & Co By Choosing Function Over Form The startup currently manufactures four types of Bluetooth earphones for different activity needs with an average ticket size of INR 2,150.

It has clocked a total revenue of INR 1.55 Cr from selling 10K devices since its launch

The year: 2016. The day: September 7. Apple, the iconic tech company, took a bold leap on that day as iPhone 7 and iPhone 7 Plus, the most advanced versions at the time, were introduced minus the 3.5 mm headphone jack. Dropping it so unceremoniously might have shocked the world then, but users were offered wireless earphones for an effortless listening experience. It was an innovation that killed the decades-old hardware as it was rapidly losing its relevance.

The tech world was in turmoil, though. What followed was a series of boardroom discussions across the mobile phone industry, and soon after, every tech giant — from Google to Samsung to Xiaomi — followed suit. On a macro level, consumers worldwide were left with mixed emotions — saddened at losing a reliable and affordable piece of tech but also excited as the future of earphones unfolded. Better still, two hobbyist musicians living in Mumbai saw an opportunity as the new-age smartphones called for state-of-the-art accessories.

Kushal Kaushik and Akshay De, musicians-turned-technologists, started to search for the perfect wireless earphones but soon realised the limitations of the devices available at the time. Fuelled by their passion for music and sensing an opportunity to drive sales via the booming ecommerce market, the duo decided to set up LoopAudio, a hardware startup developing a range of Bluetooth earphones.

“We were disappointed to find that no wireless earphones could deliver more than three to five hours of playtime or provide high-quality music at a reasonable price. And we wanted to change that,” says Kaushik, cofounder of LoopAudio.

Although the headphones and earphones segment in India clocked a revenue of $805 Mn in FY2020-21, the market was in a state of a lull for the better part of the 21st century as the technology behind them did not evolve at a fast clip. But over the past few years, since smartphones have started ditching the auxiliary port, the use of Bluetooth technology has pushed hardware companies to adopt a more sophisticated approach for a better audio experience.

Indian players such as boAt, Boult Audio and MiVi were launched during this disruptive period and developed a slew of high-tech, stylish but affordable earphones to cater to Indian users. The surge in the market also pushed older players like iBall and Intex towards wireless technology. 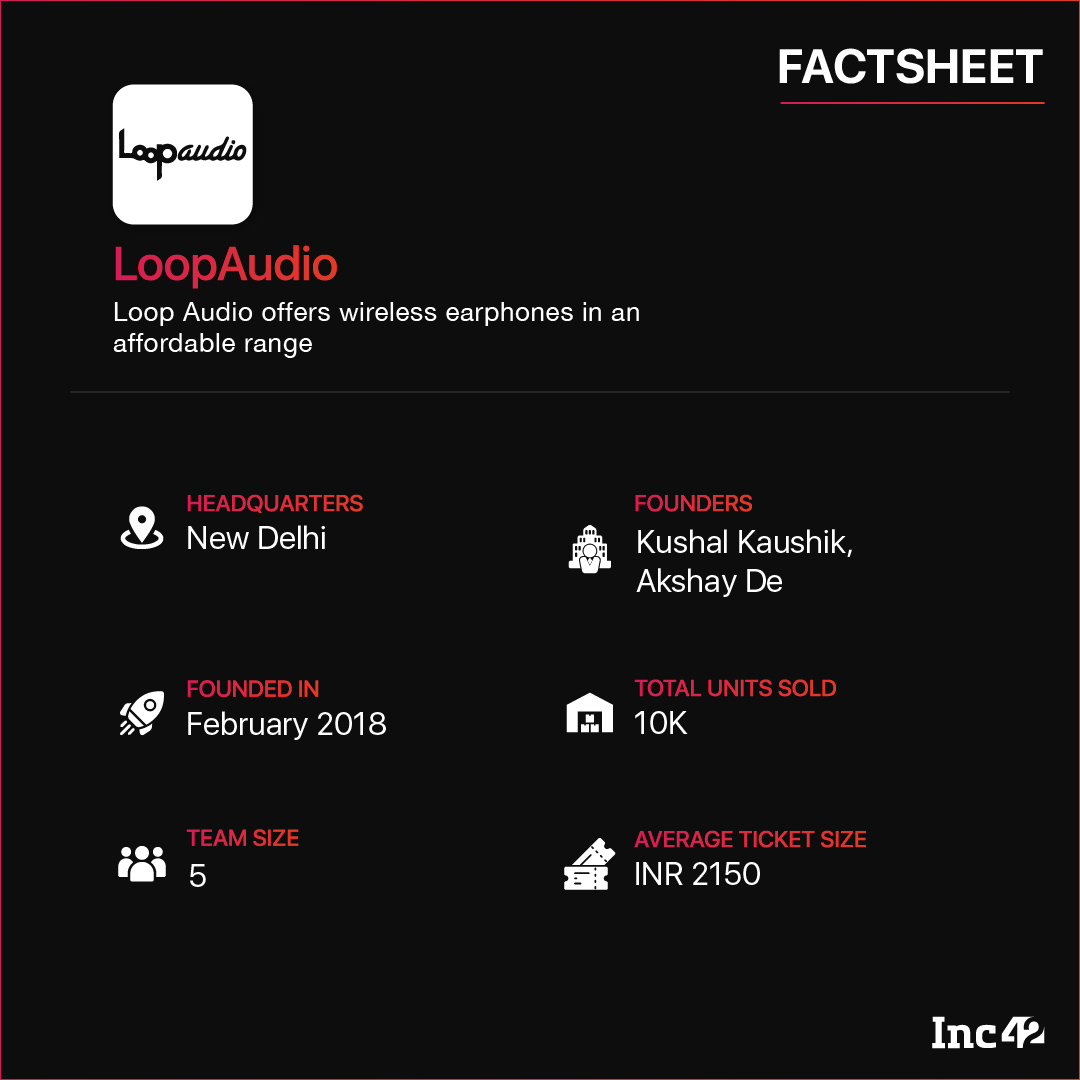 Kaushik and De set up LoopAudio in 2018, intending to build top-notch but pocket-friendly earphones. The startup currently manufactures four types of Bluetooth earphones for different activity needs with an average ticket size of INR 2,150.

LoopAudio co-develops its products by working with factories, which have the required infrastructure and experience of making similar audio devices.

Like most electronics brands in India, its production includes mainly the assembly of parts. The startup procures the parts for the earphones both locally and internationally and assembles them in rented-out factory units. The startup leases out factories that already work in assembling earphones and other electronics to save on cost for machinery. However, Kaushik states that in the future as the scale of manufacturing goes up, the plan is to buy their own factories to streamline the manufacturing operations.

But in spite of high input costs, prices are kept low as the startup has adopted the direct-to-consumer (D2C) model, cutting off all middlemen from the supply chain. It also minimises the design aspect to cut costs and focusses only on the audio quality.

“We invest in technology, product features and quality instead of visual design. We try to bring aesthetic design naturally into our workflow but do not want to spend anything extra on that. In today’s consumer electronics market, designs get old every three months. So, it is better to focus on the functionality instead of fretting about controlling the contours,” says Kaushik.

LoopAudio is part of the consumer electronics ecosystem that has been riding the D2C wave. To keep their manufacturing costs under control without compromising on quality, Indian startups in this space rely on several factors, including keeping the middlemen out of the entire supply chain, not opting for above-the-line or ATL marketing (mostly ‘untargeted’ promotion for a broad reach, similar to TV campaigns) among others.

LoopAudio averages 300 orders a month and has sold more than 10K units since its inception. It also generated total revenue of INR 1.55 Cr till 2021.

One of the critical challenges for LoopAudio was understanding the nitty-gritty of the fundraising process and strategies, the governance and the regulatory mandates and other legal aspects surrounding them. Initially, the company had decided to build some buzz and traction to attract investors’ attention. But being an early-stage startup, it lacked the knowledge of when or how to go for funding, and its efforts fell through. And as it happened with many companies, the onslaught of the Covid-19 pandemic spoilt its fundraising plans.

At the same time, the D2C startup got shortlisted for Shiprocket’s Rocketfuel accelerator programme in 2020 which helped it solidify its marketing, product placement, packaging, building brand narratives, funding pitch and equity management.

Addressing all would-be entrepreneurs keen to enter the D2C space, Kaushik says, “It is more difficult than you can anticipate. So, get ready for things not to work out as you want and when you want. Stay focussed on long-term goals but never lose sight of the small, achievable tasks/milestones.”

With an increasing base of 130 Mn online shoppers and a lowering hesitancy for ecommerce that has been accelerated by Covid-19, the stage is all set for the D2C segment. According to Inc42’s report titled Decoding India’s $100 Bn+ D2C opportunity, the current consumer electronics market is at $18.5 Bn and is estimated to reach $30.6 Bn by 2025.

With the rise of India’s D2C wave, a stronger enabler ecosystem is in order to ensure that the segment reaches its full potential. While pure-play D2C operations for smaller brands may as well be a pipeline dream, more self-realised D2C brands will benefit not only the ecosystem and its allies but the Indian economy at large.

This article is part of our coverage of The D2C Summit by Inc42 Plus and Trell scheduled for 3 & 4 Dec, 2021. Join 5,000+ D2C brands, leaders, investors and experts at India's largest D2C and ecommerce conference! Register now, ticket prices increase every week!