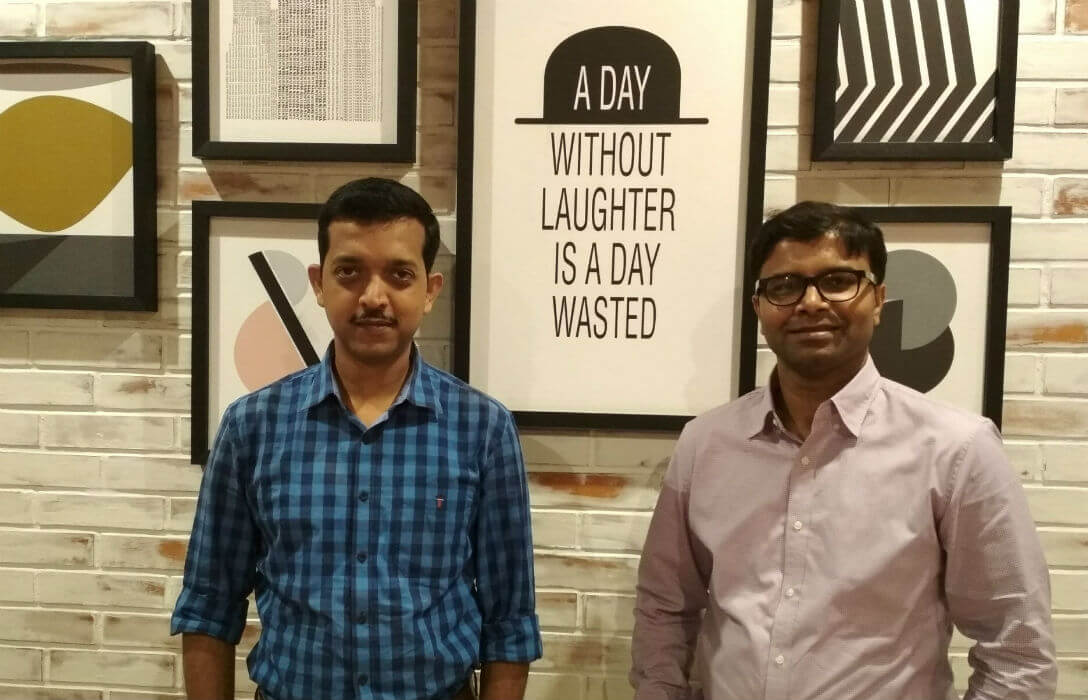 HappyDNA Aims For 190 Mn Parents And Chains Of Preschools, To Help Detect Ailments In Growing Children

In October 2017, the Indian Union government in its National Health Policy (NHP) draft indicated the concerns around the increasing burden of NCDs (non-communicable diseases) in the country. These medical concerns get worse in the case of toddlers. In order to meet the challenges of preventive healthcare for children, two school friends Sudipta Pal and Abhik Mallick launched HappyDNA.

Launched in November 2016, a month later to the NHP draft, HappyDNA is aiming to herald preventive healthcare solutions for kids aged between 1.5-7 years.

India’s healthcare sector is booming and is expected to touch $280 Bn by 2020, as per IBEF. But preventive healthcare, especially the kind that caters to kids, is yet to catch up and is relatively new in India. This is exactly the reason why Indian entrepreneurs are seizing preventive healthcare as an opportunity and boosting the healthcare industry.

With our changing lifestyles, it is imperative to detect early symptoms so that their ailments may be treated well before time. And this is where HappyDNA is striving to make a difference.

On a mission to provide early detection of symptoms in children via its workshops, website and app; HappyDNA works in the area of NCDs and mental wellness. Primarily focussed on these two vectors, the startup works with pre-schools on the model of ‘Detect and Intervene’ which means that it provides personalised services for health checkups in pre-schools with a team of specialist doctors who examine kids between the age group of 1.5 to 7 years.

HappyDNA was conceived due to a personal motivation of Sudipta. Since his birth, Sudipta harboured a heart problem, right bundle branch block (RBBB), and it was not detected until his adulthood. The problem came to light only when health checkups were conducted on him for some investment purposes. This experience of his life triggered him to think about working on preventive healthcare systems.

Recollecting his experiences while speaking to Inc42, Sudipta said, “I could have led a more healthy life had I known about my RBBB problem.” This thought kept striking him and during his time in the US and Canada on his work tours, he learnt about how the governments in such developed nations have enabled preventive healthcare for kids in schools itself.

Once the seed was laid, the dream started flourishing as he started connecting with school friends to plan for HappyDNA and thus Abhik came onboard as a co-founder.

“We thought to bring preventive care awareness and to identify health issues among kids as young as one and a half to two years of age. So, that’s how HappyDNA was born. The idea to create the curriculum by a core medical team expert was to provide a holistic coverage to a child’s health perspective. So, with our structured curriculum, we interact with the child and the school and we identify the problems faced by the child and accordingly educate the caregiver.”

Expanding Network With Preschools And Parents

HappyDNA works on a B2B model with preschools. It targets urban preschools so children as young as 1.5 years of age could be a part of the workshops. The core team has developed a curriculum to check the health issues amongst children.

The HappyDNA mobile app is customised and personalised to provide parents with a sound awareness of impending symptoms, awareness and consultations.

Parents are able to participate in the online discussion forums where they can also read blogs which are posted on various child-related health issues. They can also reach out for consultations with the listed doctors. The startup doesn’t own separate clinics but since their inception, they now have a pool of 150+ doctors.

They have touched the lives of 13,800+ children and currently, the team is working with 17 hospitals and clinics.

HappyDNA conducts a detailed medical check-up making use of its curriculum which was developed by its core medical team and it examines the entire physiology, ENT and dental problems of children. Sudipta said, “We were able to uncover heart murmur in many kids and parents weren’t aware of it. About 4% of the kids in India have the heart murmur.”

Parent profiling is a core part of the work at HappyDNA. With young children, their stress and trauma become predictable through studying parenting styles.

“We follow a unique model of ‘Educate and Detect’ and it is our primary focus for the next three to four years for our preventive healthcare curriculum,” stated Abhik.

HappyDNA is not involved with clinical tests as of yet, even though they are equipped for physiological health checkups. It publishes researched articles through blogs and conducts physiological check-ups on the premises of the pre-schools.

The startup aims to reach as many pre-schools as possible so that any kind of health issue amongst children may be taken care of as early as possible. It partners with hospitals who then prepare a team of doctors for the health checkups in the pre-schools. The parents are not charged by the startup as it works directly with the schools. The startup is helpful in also handling specific issues in children related to autism, dyslexia, ADHD, diabetes control, etc.

The healthtech startup has two operating sites, one in Kolkata where it already working with preschools and the other in Bengaluru.

Since its launch in October, about 2,200 downloads for the app have been registered and offline, the gross profit margin is about 42%, HappyDNA has also impacted over 25K+ parents and children through their offline and online services.

The startup is also popularising its content and through its operations, it’s aiming to achieve a break-even. Presently the startup is catering to four preschool chains in Kolkata and has established its footprint in Delhi. HappyDNA was also shortlisted for ET Power of Ideas, ISB jumpstart and HitLabs by Unitus Seed Fund.

The healthtech startup is now looking forward to bringing a greater number of pre-schools within its services fold. “By early 2019, we are trying to go to the school areas, the next age level (8 to 14 and later till 18) and start coaching for high school too. Then, we will start catering to tools that concern the psychology of older kids since the requirements for teenagers are different from preschool kids,” stated Sudipta.

Besides looking at Tier I cities for expansion, the startup also has plans to expand into Tier II cities. Abhik said, “One of the biggest reasons for working in the healthcare sector is that India is finally starting with the four A – availability, accessibility, affordability and awareness. The healthcare sector is trying to reach out to more people.”

HappyDNA is optimistic for growth in the coming years although the competition in child preventive healthcare has already begun with competitors such as Address Health, Health Set Go, Parentune, Babygogo, etc.

The modern-day nuclear family setup comes with a lot of baggage. One of the baggage translates to less parenting time. Workplace stress has a detrimental impact on the mental health of parents and the stress is eventually reflected in their parenting style. There are also detrimental effects of screen-addiction in children leading to learning disorder, obesity and other developmental concerns.

All these culminate in an inflection point where modern parents are looking for professional help in the child’s development. “With technology and social media influence, we are seeing increasing early adopters of digital healthcare services. Increased Internet penetration and acceptance of healthcare services through digital platform brings the total market size to 190 Mn parents,” said Sudipta.

Kolkata, the City of Joy, is tiding over the wave of Indian Startup hubs along with the rest of the country. With private and government entities, the startup ecosystem is looking up in the state and today, it can boast of 250+ startups. However, despite the increasing number of startups, HappyDNA founders think there is still room for a lot of improvement in Kolkata.

Sudipta goes on to say,

“Mindset is still nascent, be it the youngsters or the professionals. People here are yet to take the kind of interests which is prevailing in Hyderabad or Bengaluru. There aren’t much platforms where startups can network for business in Kolkata. That kind of culture is yet to develop.”

Despite the challenges, HappyDNA is growing by leaps and bounds and it is determined to take strides along the rough terrain of children preventive healthcare sector. In India, due to lifestyle changes brought in by rapidly spreading urbanisation and industrialisation, there is a marked shift in the way healthcare systems are functioning because of which an equal importance is now being given to the early detection of health issues and resolving them.

With India’s public healthcare spending at 1.2% of the Gross Domestic Product (GDP), there is a crisis facing the healthcare system in the country. In a country plagued by dire health needs, it will be a gripping encounter to watch HappyDNA meet the challenges.

[HappyDNA was among the six startups that pitched during Kolkata edition of BIGShift – a localised startup meetup series by Inc42 and Amazon India, click here to read our coverage on BIGShift.]