Unlike China, Indian cities don't have the infrastructure for parking of shared mobility vehicles

Rising pollution, congested roads and barely any room to breathe, let alone park your cars — it’s the story of every Indian city and a pain point that the electric mobility ecosystem finds easiest to tackle, given this apparent need.

From Mahindra, Hyundai, and Tata to luxury brands such as Mercedes and BMW, the industry has bought in on India’s electric mobility ambitions, but it’s the small vehicles such as two-wheelers, three-wheelers that are expected to drive the next generation of mobility solutions. That’s because these are the vehicles that Indians use the most and where the pain point is obvious and visible.

For Amit Gupta, the time to push for last-mile solutions came “when it started taking half an hour or more to scale shorter distances of less than two km.”

This personal pain point was the root inspiration to launch Yulu. The cofounder and CEO also saw the larger picture of the congestion and pollution in most large cities in India. 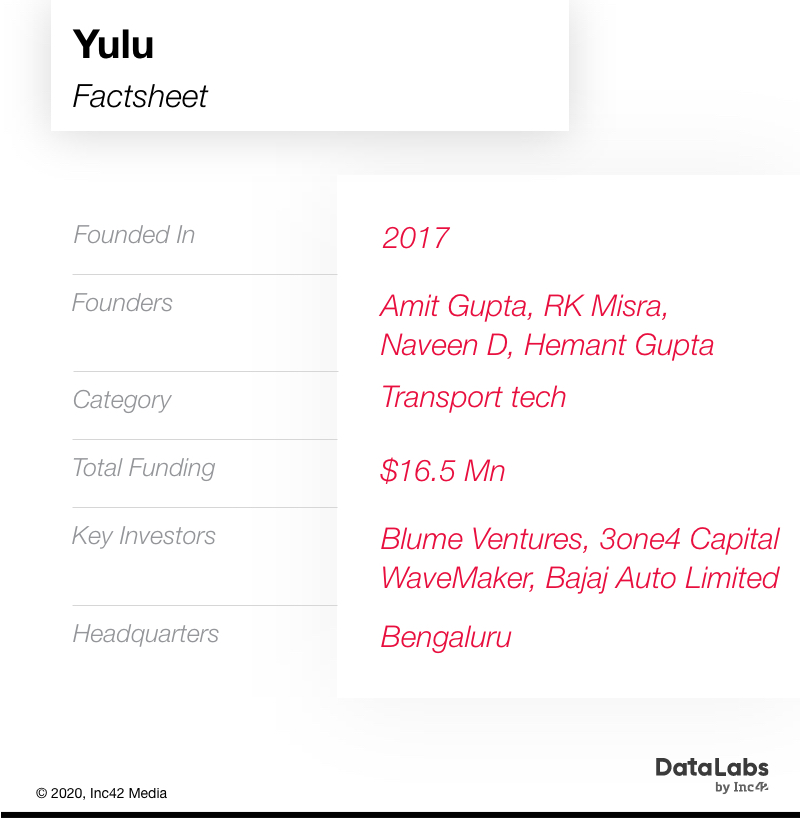 Founded in 2017 by Amit Gupta, RK Misra, Naveen Dachuri and Hemant Gupta, Yulu says it offers a UMaaS (urban mobility as a service) and in a capital-intensive business where consumers are still apprehensive about adopting electric vehicles, this model serves it well.

The bikes themselves are pretty cheap to acquire so getting the unit economics right, which is the key element, was easy. “Frugal Capex of the Miracle bikes, combined with the cluster-based setup, efficient and tech-enabled operations, has led to profitable unit economics. We have the best contribution margin rate in the industry, even when compared to micro-mobility peers globally. In a steady-state, this profitability will further improve with economies of scale,” claimed Gupta.

Yulu claims to have developed a vertical stack needed to run its EV fleet from design and ownership of the assets to charging batteries and on-ground operations, the company claims to have little dependency on external factors.

With more than 14K vehicles (bikes and cycles) and 1.8 Mn users, Yulu is something of a success in the fledgling Indian dockless bike market. Cofounder Gupta believes that this is a result of four innovative practices. The first being the creation of a unique battery-swapping network by placing proprietary IoT-enabled charging boxes (Yulu Max) at hundreds of mom-n-pop stores across the operational areas.

“Unlike China, Indian cities don’t have the infrastructure for parking of shared mobility vehicles. We solved this problem by working with cities, corporates, and citizens who have given access to prime real estate to create Yulu Zones,” said Gupta, adding that most such spots have been offered to Yulu to help build sustainable mobility for the cities in a collaborative manner.

The third aspect, according to Gupta, is safety, which recently came under the scanner and post which Yulu is looking to upgrade its bikes. But while vehicle safety itself will be solved in the long run and keep evolving, Gupta thinks that the physical safety of the bikes is also important. “Yulu Miracle has a theft rate of less than 1%, which is significantly lower than global ride-sharing platforms. This is attributable to our operational model of drop off at designated Yulu Zones.”

On the customer front, the platform works on a pay-per-use model, where a first-time user needs to register on the app with a refundable security deposit. “The MOVE + MIRACLE plan requires a refundable deposit of INR 250. Users are billed INR 10 to start and INR 10 for every 10 minutes for Miracle usage. In Bengaluru, we have recently revised the pricing to INR 5 as the Base Fare and INR 1.50 per minute. Yulu Move users pay INR 10 for the first 30 minutes and INR 5 for the subsequent 30 minutes,” Gupta added.

Finally, Gupta thinks that high durability is the fourth success factor thanks to the minimal use of plastic parts and regular proactive maintenance activities.

Riding The Patchy Terrain Of Infrastructure

While the four practices are elemental to Yulu’s success, the electric mobility provider also faces certain operational challenges. “Challenges come in many forms to any company operating in the electric vehicle segment. These are societal, logistical among others,” said Gupta.

He added that public transport in India is dependent on fossil fuels and that the ecosystem for the development of electric vehicles is at a nascent stage compared to other countries. The mindset needs to change and the partners in the ecosystem need to think in a cohesive manner to overcome the hurdles.

“We have seen the first signs of change in mindset and adoption. Compared to three years ago, there are classic examples right from CEOs to individual employees choosing an eco-friendly mode of transport to work.”

According to the Future Trends In Indian Mobility report, EVs constitute less than 1% of all the vehicles sold in India at present. There are more than 400,000 units of electric two-wheelers and only a few thousand electric cars on Indian roads, it added.

“The rising trend of scooterisation in India will continue. Two-wheelers and three-wheelers will be more attractive targets for electrification in the short term.”

With Bajaj as an investor, Yulu has a new partner to source electric two-wheelers from and reduce its reliance on the Miracle bikes which are sourced from China. The new Yulu Bikes are expected to be co-designed and manufactured exclusively for shared micro-mobility for the Indian market.

On plans for market expansion, Gupta said that Yulu’s first target is to penetrate deeper into existing cities. “We are driving this change in India by building an ecosystem of EV-led micro-mobility and aim to expand our services to eight mega cities and select smart cities under the government’s Smart Cities Mission as the next stop.”