Gurugram based B2B agri commodities procurement startup Procol provides access to food retailers and FMCG companies to manage vendors, monitor cost in real-time and transact so that they have a faster inventory turnaround time

Till date, Procol has raised close to $5 Mn in funding from various investors including Sequoia Surge, Beenext, Blume Ventures and Rainmatter Capital

Procol has about 5000+ businesses on its platform, including the likes of Haldiram’s, Big Basket, Future Group among others, and has attained INR 420 Cr gross margin volume (GMV) and net promoter score (NPS) of 50%

The agri commodity landscape is riddled with inefficiencies and uncertainties, but the $400 Bn large unorganised market is now set for tech-enabled disruption to raze many of these hurdles. With the help of supply chain startups such as Ninjacart, Crofarm, Procol, Udaan, StarAgri, AgriBazaar, Farmpal among others, farmers and the agri community as a whole has managed to overcome many of the larger challenges in the way.

At the bottom of the agri value chain and the most crucial component are the farmers, followed by food processors, marketers, retailers, wholesalers and then the end consumers or manufacturers. While challenges of fair pricing, quality, transparency and trust have existed for decades, they have come to a head with the Covid-19 pandemic.

Furthermore, the lockdown period has pushed the Indian government to ease policies for tech adoption in the agri supply chain so that farmers can now sell directly to the end consumers, through the available e-trading platforms (eNAM) as well as other platforms of their choice instead of being confined to traditional mandis. However, now that a majority of state mandis or APMCs are operational, the digital transformation seems to have taken a backseat.

While a majority of the startups are focusing on the downstream market i.e. trying to eliminate the middleman from the equation and are helping manufacturers and businesses connect directly to the farmers, some are looking at the disruption from an inclusive POV.

For Gurugram-based B2B agricultural commodities procurement platform Procol, the idea is not to exclude anyone in the value chain. This includes buyers, sellers, traders and brokers, so Procol is enabling manufacturers to save money in the procurement process through a mobile-based, tech-enabled procurement platform called AgriBid.

Founded by ex-Google, Zomato, OYO engineers and product professionals Gaurav Baheti and Sumit Mendiratta in 2018, the company claims to have digitised the procurement operations for manufacturers which does not eliminate the middlemen but rather makes the layers more efficient. Founder Baheti said the company started out addressing agri challenges, but then realised that this is an industry wide problem and billion-dollar agri companies still use emails and phone calls to collect quotes, negotiate deals and procure produce.

“$100 Mn worth of goods are being procured on phone calls and emails. This leads to loss of data, lack of transparency and trust in purchases, inevitably causing leakages in the procurement margins,” stressed Baheti.

That is how Procol — which is short for procurement protocol —  was born. The platform provides access to food retailers and FMCG companies to manage vendors, monitor cost in real-time and provide financial access so that they have a faster inventory turnaround time. “For the larger manufacturers, price and quality is the most important factor, and they will go the extra mile to make sure they can achieve the best margins. Similarly, for retailers, they look for better inventory turnaround so that they can buy and sell commodities faster,” explained Baheti.

In July, the company raised $4 Mn led by Sequoia Surge, alongside Singapore-based venture capital firm Beenext. Prior to this, last year, the company had also raised $1 Mn from Blume Ventures and Rainmatter Capital. Commenting on the recent funding, Baheti said that the company is currently using the fund to enhance the customer experience on the platform. 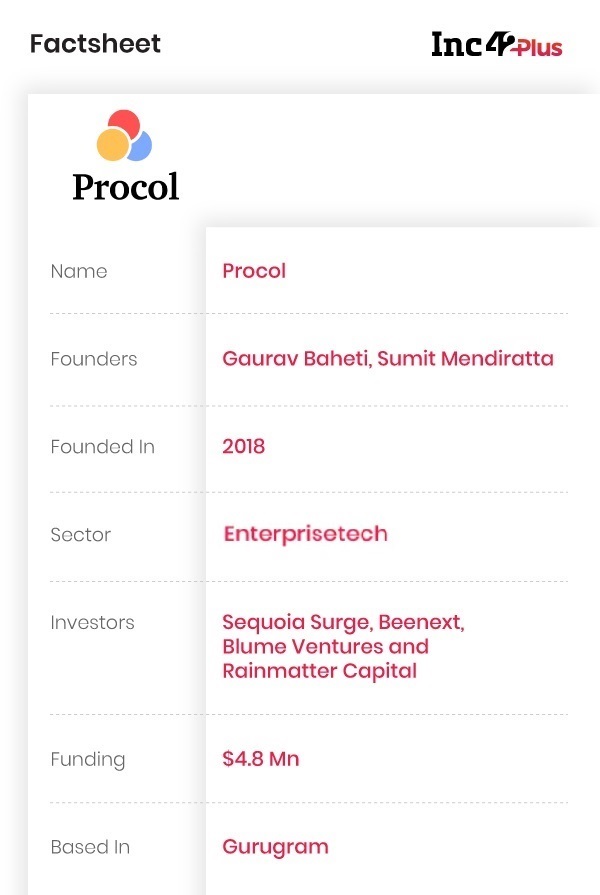 “We do not provide vendors from day one,” clarified Baheti. Even though vendor discovery is one of the services offered by Procol. Instead, it helps businesses not only discover vendors, but also make sure that the prices that they are buying from their current vendors/sellers are fair and transparent.

In other words, the manufacturers or the retailers themselves on-board their own vendors onto the platform so that all the transactions happen digitally. These vendors are the same middlemen that many agri supply chain companies are looking to replace, however, Procol feels they still have a role to play, and at the same time, it’s not the same as traditional procurement companies in this space.

“We are very different from the traditional players, as we do not own the suppliers, the customer owns the suppliers — it is their network, they themselves bring their vendors onto the platform because they want to manage them better,” said Baheti.

During the Covid-19 period, Procol said that it witnessed that the supplier base grew multifold. As supply chains got disrupted during the pandemic, Procol customers started diversifying their vendor base on the platform so that they were able to mitigate the risk and the production was smooth. “In fact, we have helped companies reduce cost significantly,” he added.

Today, the company has about 5K businesses on its platform, including the likes of Haldiram’s, Big Bazaar, BigBasket, Future Group among others, present across India. The company’s net promoter score (NPS) is over 50% and it has attained a gross margin value (GMV) of INR 420 Cr in the span of two years.

Can Procurement Be Less Costly With Middlemen?

For example, if someone is selling rice, each vendor quotes prices in real-time, and the manufacturer will be able to buy them on the basis of who is selling for less, and this price is locked on Procol. In terms of revenue, the company said that it follows a mix of revenue streams, including subscription, transactional and license based approach. Procol’s Baheti said that the cost depends from one customer to another, costing anywhere between $10K to $100K.

Further, the company did not share the transactional numbers, but said that since they offer services to large companies, the number of transactions is less, but the volume of the transaction is high. At present, Procol caters to food retailers and large FMCG brands, and it told Inc42 that in the coming months it will also be catering to the hospitality sector as well. Also, its procurement platform has digitally evolved to cater to a wide set of customers and suppliers.

“Previously, large costumes who did not have access to vendors, are now able to find vendors on our platform on the go. At the same time, small vendors who did not know a way to sell to large organisations and companies, we are enabling that to them as well,”  added Baheti

In terms of roadmap ahead of Procol, the cofounder said that it does not look to expand its business to other geographies at this point in time, as it believes in keeping its focus on enhancing the customer experience, thereby bringing more RoI for the customers themselves. “Currently, we are completely focused on automating the entire procurement process, providing visibility and savings for our customers.”