Bolo Indya bets high on boosting the passion economy in country, where users can transform their social capital into financial independence

In terms of time spent by users, Bolo Indya is at par with time spent on TikTok at 62 minutes per day, and more than five times the time spent on Roposo, Chingari and Mitron

Indian users are hungry for more short video apps after TikTok’s exit. The rocket growth seen by the likes of Mitron, Chingari, Bolo Indya, Trell and others is a testament to the huge engagement that this medium can generate and shows just how massive TikTok was in India.

After the ban, over 200 Mn Indians have started the exodus from TikTok to Indian alternatives. That includes the likes of Bolo Indya, InMobi-owned Roposo, 3one4 Capital-backed Mitron, Chingari, Gaana HotShots, Trell and ShareChat’s Moj among others. And we are not even including Instagram which has launched Reels in India to fill the gap. But the key will be regional language content and how quickly each of these platforms build up this aspect within the app.

Varun Saxena, founder and CEO at Bolo Indya, told Inc42 it has already brought in plenty of business to service providers  and experts on its platform. Thanks to a loyal follower base, Saxena claims the bigger creators are earning close to 25-30K per month, which is significant income for most Indians.

“While the short video format remains the same across applications, it is important to give users what they are already comfortable with and add value to that,” said Saxena, pointing at the buzz around the short-video app in recent times, after TikTok and 58 other Chinese apps were banned. 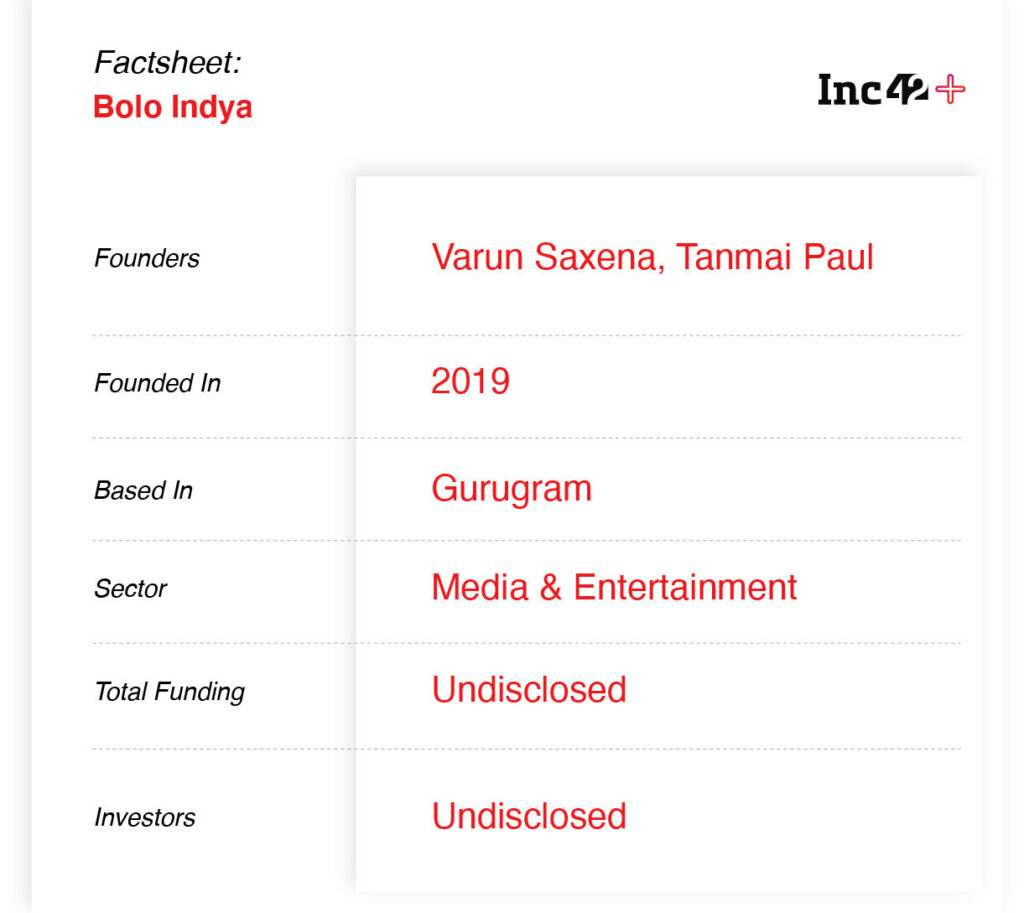 Essentially, Bolo Indya is positioning itself as a services marketplace, which also has short video content that is used to sell these services and create engagement for the service providers. For example, there are hundreds of astrologers who are creating short videos without converting the viewers into customers. That is where Bolo Indya comes into the picture, where consumers can avail astrology services within the app itself, by interacting with the astrologer and getting more details.

“Gig economy is the thing of the past. Today, the entire world is moving towards the passion economy, and people in Tier 2 and Tier 3 are looking for alternative sources of income, where they want to be financially independent, and generate earnings using their skills, knowledge and expertise,” said Sexena.

Creators can make videos in any interest area, interact with the users on Bolo Indya and build a community to provide services, content and more. “Currently, we have onboarded popular influencers, content creators and celebrities to deliver services. It is a win-win situation for both, where creators can post high-quality videos, earn and scale, and users, on the other hand, get to learn and evolve.”

In the US, the so-called passion economy or the new creative economy has already witnessed a massive boost since the emergence of the internet. In 2017, more than 16.9 Mn independent, American creators earned a baseline of $6.8 Bn from posting their music, videos, art, crafts and other works on platforms such as Amazon Publishing, eBay, Etsy and Instagram to earn income and drive the growth of the multibillion-dollar industry.

“By the time passion economy hits its surge in India, we would have already crossed the critical mass, and we will have more advantage than any other platforms,” said Sexena, confidently.

All in all, Bolo Indya is betting on the long term success of the platform, where its users get to discover new things everyday and avail services, right from astrology, to learning beatbox, singing, acting, languages etc. Curating a personalised experience for its users, the company said that most users today come to their platform not just because it is an Indian app, but for its value.

Saxena makes no bones about this being due to the ban. “We have witnessed a much higher traction as compared to what we saw during the lockdown. It has been pretty good for us, and we respect the sentiments of people and the decision made by the government.”

In terms of time spent by users, Bolo Indya has grown to 62 minutes from an average of 39 minutes per day. At the time of writing, in the last 72 hours, Bolo Indya users have created close to over 2.9 Mn videos, 85% of users that downloaded the app continue to use it and are creating videos. As of last month, 1.97 Cr videos were being created by the users, however, in the last three days, users have generated close to 42.37 Lakh videos and have consumed 6 Cr hours of video content. 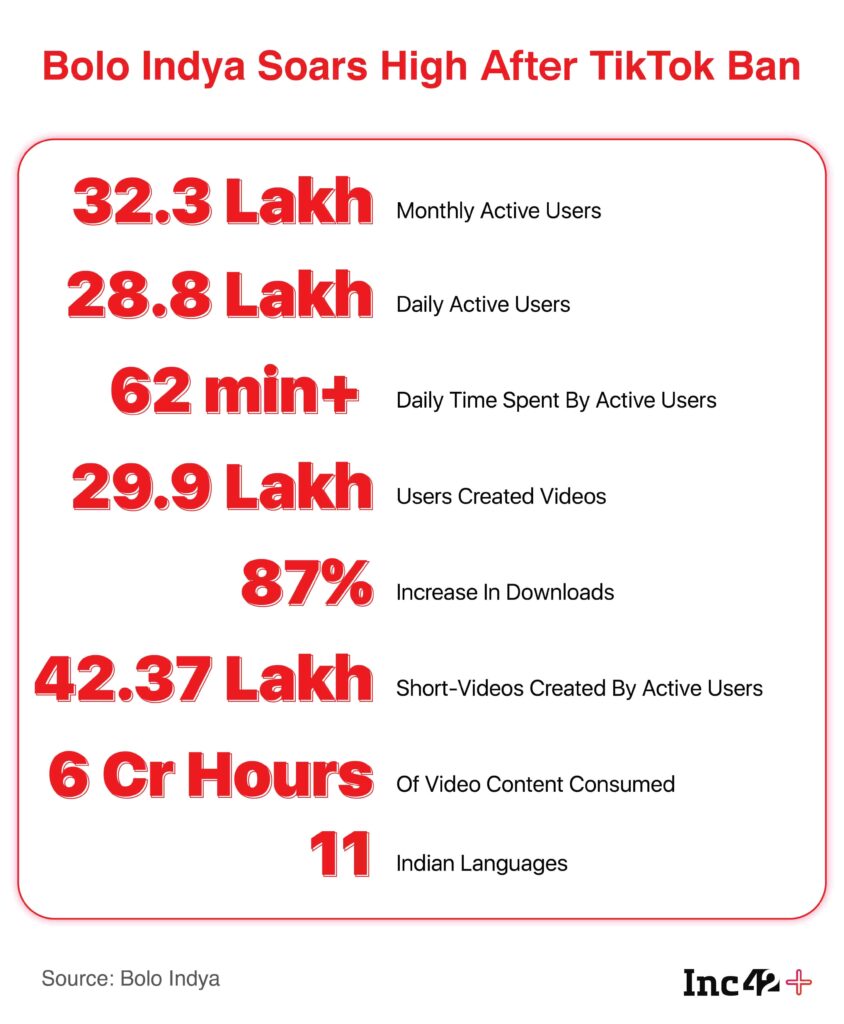 Throwing light on the content moderation aspect, Saxena said if someone uploads any kind of hate and violence videos on Bolo Indya app and try to go viral, the algorithm does not go viral, instead it gets blocked from the platform. “It is really important to respect each other’s beliefs, emotions and sentiments,” he added, “Going forward, this will also help us strengthen our platform multifold.”

In the early days, Saxena and cofounder Tanmai Paul looked to balance out the disproportionately high English-based content on social media, particularly in the general knowledge area. “We started to interact with our users to understand what keeps them engaged with the content more, and that is where we identified the love for local language content and short-videos,” the cofounder added.

Revenue through services is a direct result of engagement. In their user tests, the UGC short video category showed higher daily retention compared to UGC text-based content. “That is when we decided to shelve the use case of Q&As like Quora and started focusing on the UGC videos,” added Saxena.

As far as the revenue generation is concerned, Saxena said that earlier the revenue came through content marketing for brands. Bolo Indya has shifted its focus to revenue from video commerce, where it earns commissions through the transactions that service providers generate from the users. At the moment, 10-15% of the revenue comes from enabling services on the platform, which the company plans to increase to 85% in the coming years, while 10%-15% of revenue would continue to come from brand promotions.

In October 2019, Bolo Indya raised its first seed round backed by angel investors and family businesses from India, Qatar and Dubai. The company is planning to raise Series A round sometime this month.

Prior to the TikTok ban, Bolo Indya was looking at 1 Cr monthly active users by December 2020 and 50 lakh active daily users, banking on promotions for Diwali. But, now, it looks like Diwali has come early for Bolo Indya. 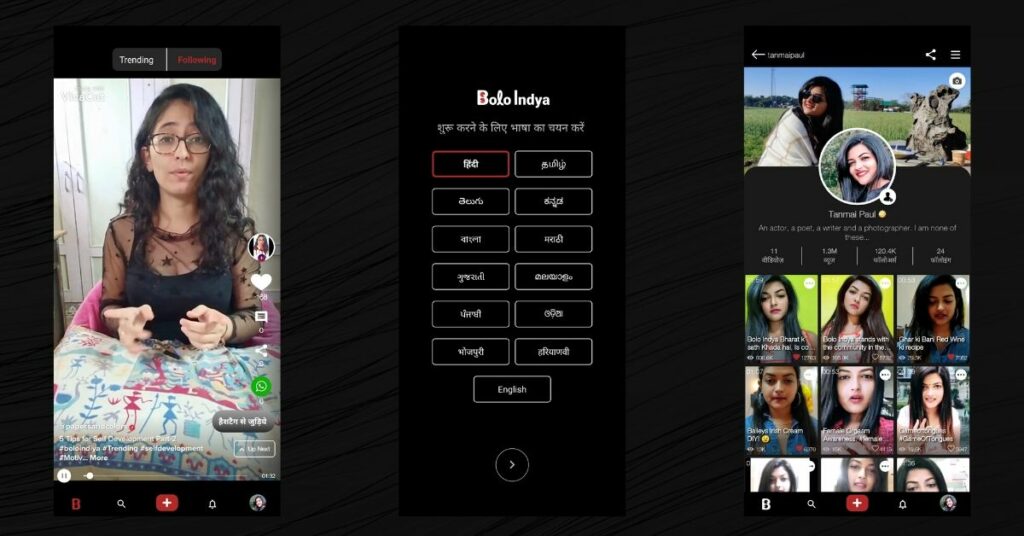 But its competitors are also adding similar features and have seen amazing growth in the past few weeks. Mitron averaged 2.5 Lakh videos uploaded per day before the ban. Since then, uploads have grown to 1 Mn+ every day. The 17 Mn monthly active users account for 40 Mn video views per hour today. So even as Bolo Indya is trying hard, it will have to contend with massive competition from new entrants such as ShareChat’s Moj, Instagram Reels, Gaana HotSpots, Chingari, Mitron and Zee5’s HiPi.

Secondly, in the video commerce space, it has well-funded rivals such as SimSim, BulBul and others. So is Bolo Indya stretching itself too thin by focussing on short videos as well as commerce — that will be the biggest test for this startup in India’s rapidly-evolving short videos space.