It’s Not Just Foodtech Startups, Dominos India Is In Trouble Too

It’s Not Just Foodtech Startups, Dominos India Is In Trouble Too

If the recent news of HSBC’s devaluation of Zomato by half & Flipkart losing the bellwether status has been difficult for you to digest, Dominos India ceasing to be a unicorn is definitely not going to be a music to your ears. India’s most loved pizza brand has seen a beating of its stock price which has plummeted sharply from INR 2000 in Aug 2015 to Rs. ~1000 in June’16, resulting in valuation of just under $1 Bn, which is a benchmark level used to define startups as unicorns.

Their 30 mins delivery promise has always wowed us. Isn’t it? It is not a mean feat, considering a country like ours, greeted by serpentine traffic jams & spiderweb of streets. Hence, it’s surprising to see Dominos struggling & there is more to the downward spiral than meets the eye.

Brief on what is going wrong at Dominos India

For any retail store, a key metric is SSSG (Same Stores Sales growth) and growth in number of outlets. SSSG primarily highlights repeat orders and new stores indicate new customers (newer stores tapping into new customers). Below is a fact sheet on how Dominos has performed over past few years & the contribution of online ordering in the overall sales. 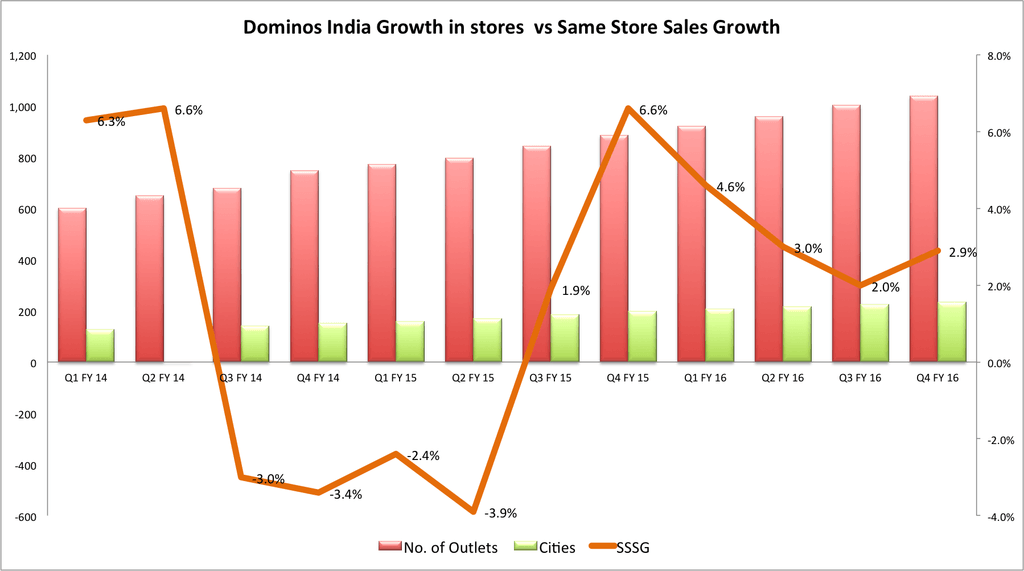 SSSG over the years have shown a consistent decline and the way it looks, 3% SSSG is the new normal for Dominos. What that means is – the company’s premium valuations in the range of PE (TTM) of 60x (due to its higher growth forecast) may see deeper corrections in the coming quarters. The recent Q4 results paint a grim picture too.

SSSG pressure is also highlighted by the fact that Dominos India in ongoing quarter (Apr-Jun 2016) has given Buy One Get One (BOGO) offer on more than 20 days out of 60 days in the previous quarter. Management itself has quoted in earlier quarters that they do “One on One Wednesday” prudently as it is EBITDA dilutive, which means it may give revenue growth however doesn’t make sense at unit economics level. This clearly highlights the pressure Dominos is feeling. Even Pizza Hut (Yum Brands) has been facing the heat in same stores sales growth since 2015.

5 reasons why Dominos India should be worried & it’s not just temporary trouble.

Slump in Dominos India is not a temporary trouble and not due to slowdown in discretionary spend. This is primarily due to changing competitive landscape & the evolving Indian consumer.

Online food ordering has actually flourished in India with today’s always on-the-go consumer. Increased disposable incomes & fast lifestyle, long queues at restaurants and DINK (Double Income No Kids) couples have primarily lead to the surge of this phenomenon. Zomato has doubled it’s revenue in the past 9 months & Food Panda has finally become operationally profitable inspite of its discounts being the main driver for consumers to try out newer restaurants & cuisine. Food ordering apps with fast delivery time & cash on delivery have been the icing on the cake. Swiggy has recorded one million orders in April 2016. No wonder online food ordering has been predicted to be a prominent channel by 2020 as per Euromonitor Report on Food in India.

Future looks healthy, more efficient for consumers but not for investors of Dominos India

Fast food as a category might not be growing in India but the daily changing menu at on-demand food delivery startups is a reflection of the variety seeking-consumer who considers food as an extension of his personality & mood. The craze about tech wearables acting as an enabler for losing weight, tracking the number of steps walked, calories burnt by each & every activity is a sign of things to come.

Future of food tech is not bleak as is being highlighted by the media. However, the future would see emergence of “home cooks/chefs” play out, which has also been highlighted in an excellent article by Miten Sampat on food tech revolution in India. He touches on a number of points that would have been relevant here and lot of other issues, which I specifically didn’t address because he has already done a great job on that. However, off late, the sector has taken a beating from investors, media and has seen rapid slump in investments from the highs of over $3.5 Bn being poured across 380 disclosed deals in the first half of 2015.

Zomato, the blue eyed startup of India, is being touted to be valued at $0.5 Bn after its markdown by HSBC. Though, Deepinder Goyal has posted a strong logically explained analysis on how Zomato has emerged as a leader across several markets encouraging his team to not get distracted by the noise around and get on to work .

Dominos India probably needs to expand its menu taking into account today’s consumers’ affiliation towards health. Even McDonalds & Pizza Hut are fighting it out to stay relevant in today’s times. However, I believe Dominos India would struggle for that high growth and we may see them acquiring a bigger Indian QSR, which would compliment their existing offerings and would help them achieve growth. But Miten has a different view. He believes that Dominos needs to become a dining platform for families (like Pizza Hut) to sustain & grow Same Store Sales. Probably introducing more of Indian range could help too.

Also, past investment cycles indicate that food as a consumption theme has all the characteristics for a sustainable business proposition if executed in the correct manner. In fact, food tech is a booming sector and would continue to be one, especially if you have got your unit economics right.

Dominos has been with the Indian consumer for a long time, whether it’s a farewell party, office celebrations or when the chips are down. Cheese burst pizzas & Choco Lava Cakes have always been there to pep up the mood. It trailed McDonalds 4 years ago, but now has become double it’s size. It’s tagline “Rishton ka time” is a testimony of the pivotal role it has played in Indian families, keeping them bonded together. We hope that Dominos India proves everyone wrong & marches ahead with dominance in this culinary journey.