Funding 101: How A VC Funnel Works

Funding 101: How A VC Funnel Works 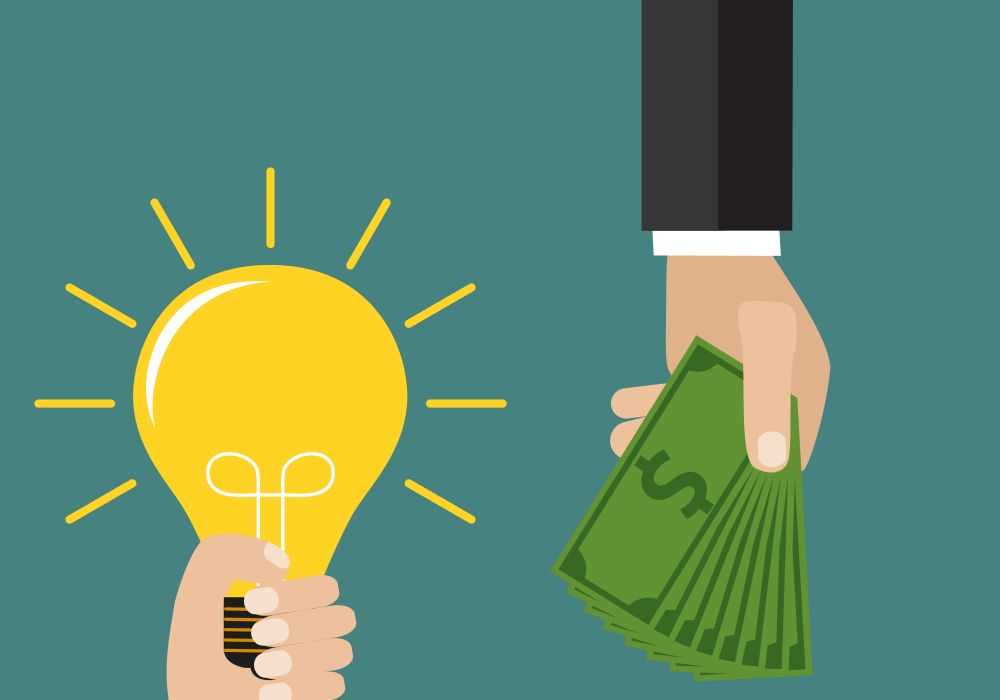 Every business has a funnel, so does venture capital. As many investors will point out, our real customers are entrepreneurs. It’s obvious then that VCs end up creating a VC funnel for their deal flow, just like you’ll do in any other business.

GREE Ventures is not a Spray-and-Pray fund, we are at exactly the opposite end of the scale. There are only a handful of funds globally (Lightbox in India, Cervin Ventures, Costanoa, and Aligned in the US and us in Asia) who take a curated 10-deal strategy for an early-stage fund, due to the inherent risk in this mode of investment. However, we do feel this is the only way to generate good returns for our investors and be respectful to our founders for having placed their trust in us, by spending concentrated capital and effort on each investment we make.

The implication of taking a curated strategy means it takes us longer to qualify investments internally as we cannot rush into deals. To counter this, I spend a fair bit of time analysing our deal flow as it moves through our funnel (or pipeline as most investors will call it) to ensure that we are being efficient and overall on top of our pipeline.

And, hence, we measure our pipeline a lot.

It all starts from the top of the funnel. Hunter Walk has a great post on how “you lose 100% of the deals you don’t see” and I totally agree. Given that, in Asia, we tend to see a lot of startups that are aiming for similar business models in the same industry it’s even more important for a VC to be seeing all the possible deals in a sub sector so that she can pick the best team out of the few companies in that space. This is why you see VCs in Asia be very active and approachable, especially in tech conferences and events.

TL;DR, VCs need to keep the top of the funnel very broad, so that they can get as many deals into the pipeline as possible. 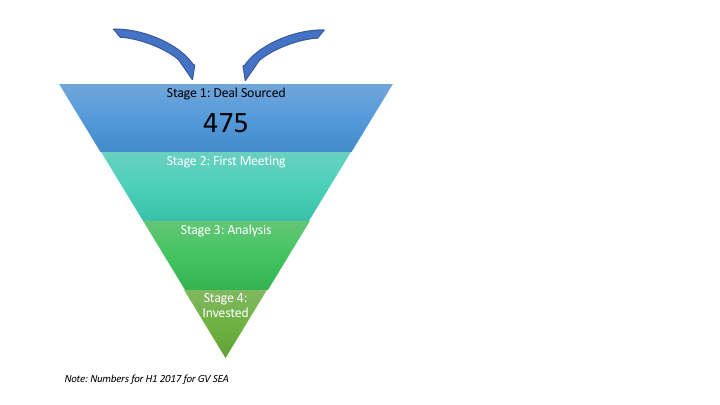 This year, at GREE Ventures SEA, we have already seen 475 deals enter our pipeline. This is through a combination of various sources, both inbound and outbound. While inbound (more likely) includes LinkedIn connects, email introductions, website form, outbound are those where we actively reached out to a company (less likely) either directly or through a reference. The number has been a bit lower than usual due to the state of the ecosystem and also I was manning the fort single-handedly for a few months. This has since changed and the second half of the year is likely going to be much busier for us in terms of deal flow.

Once a deal enters our VC funnel, we spend anywhere between one–two weeks on this stage of having the first meeting with the founders and then an internal discussion. The work here involves the managers talking about the company within the team and doing a quick gut check to see whether this particular deal can be a good fit for the fund. The better a team’s processes in managing and discussing deals internally, the faster this stage can be. 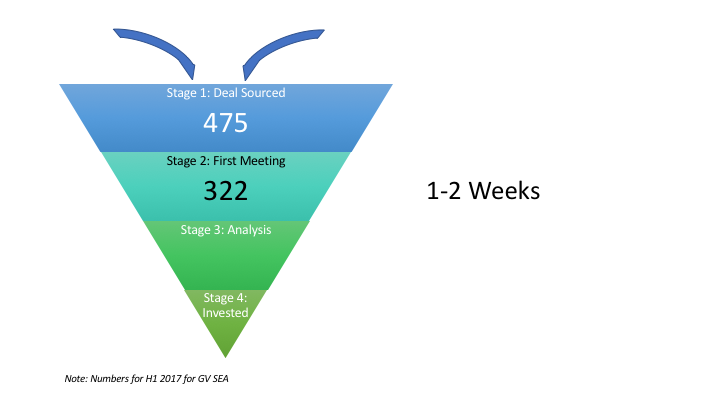 We (mostly I) met 322 companies in the first half of this year. That’s roughly 100 working days (taking out holidays, business travel, weekends) meaning an average of 3 companies a day. For context, I have written previously about “Days of our Lives.”

As most founders will tell you, an early no is much appreciated in the industry than keeping a company hanging, and eventually saying no. Since the time I took over the pipeline this year, I have really tried to focus on this. For me, the easiest way to track this internally has been in what I call ESNO or “Efficiency of Saying No.” As you can see from the chart, our efficiency has increased significantly over time and my internal aim is to keep this number below 10 days. The last couple of months have been much lower mostly because the deal flow was heavily influenced by conference leads, companies that are usually easier for us to segregate and find the right ones for us. 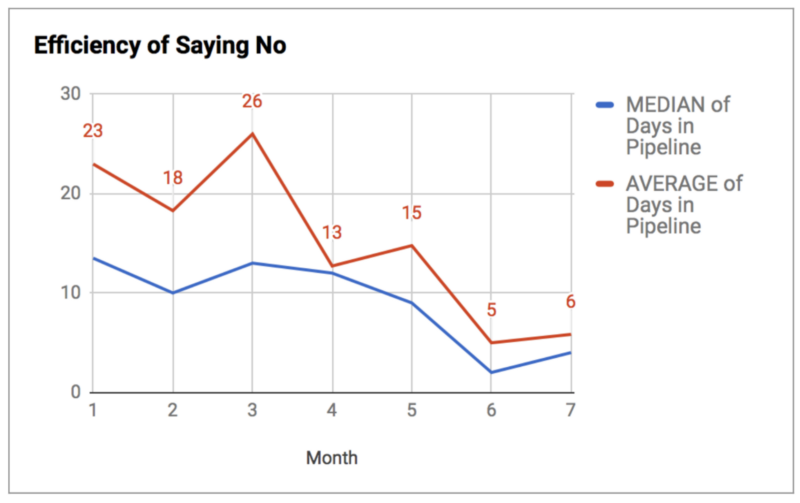 While building a strong network helps you get the top of the funnel right, the real art in VC is in immediately narrowing that funnel when moving into the next stage. This is because VCs have VERY limited resources. While startups go from 5 (Seed) to 30 (Series A) to 100 (Series B) employees in a time space of 3–5 years, a VC firm would not even swell 2x in size in four-five years (when we raise our next fund). What this means is that we need to be very selective in the companies we spend time with and be very good at the early weeding process. 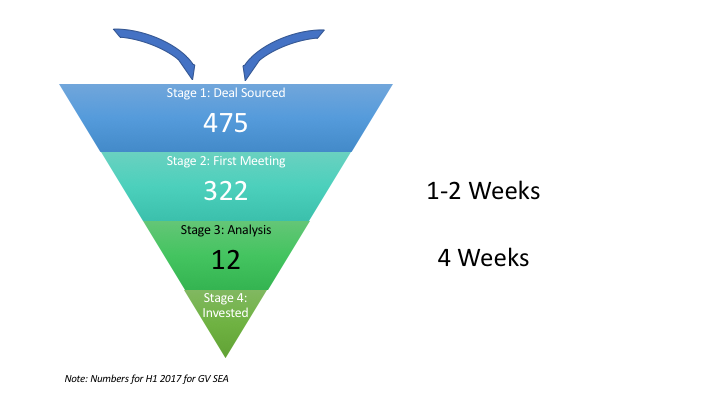 This stage is the one where the deal would spend the majority of time sitting in our pipeline. We spend anywhere between four-six weeks working through the material shared by the company, the multiple back and forth conversations we have with the entrepreneurs, preparing material to discuss with the partnership (which acts as an IC for us at GV SEA), and conducting internal and external DD on the company.

At GREE SEA, we usually cut out almost 90% of the companies in Stage 2 so that every week we are only processing 2–3 deals internally, usually one per manager. This helps us focus on selected companies and industries, and overall make quicker and (hopefully) better decisions. The deal flow as you can see for H1 2017 has been not as good of a quality, where we have only selected 4% of the companies to follow up with. The whole market currently is experiencing the same, and these numbers just put some facts behind the gut feeling. A separate post to follow-up on some reasons behind this.

This stage is where our real decisions are made. When the manager leading the deal presents to the IC, it’s a one-shot make or break for the company. There is a clear outcome at the end of the meeting and if the deal goes through our IC the term sheet is issued to the founders containing the valuation and terms that the fund is comfortable with for this deal. A quick negotiation round is held with the founders in case there is any pushback, and if everyone agrees to the term sheet issued, we finish the documentation and close the deal.

While this stage is probably the fastest in the whole cycle (usually a span of one week from IC date to signing depending on docs required), it’s also the most critical as the partnership sees the deal properly for the one and only time. There are a lot of questions asked, but for the benefit of the founders the manager is already convinced of doing the deal at this stage and is usually on the same side as the company. At GREE, we do only one deal per quarter. This means we see around 150 companies before pulling the trigger or only a 0.5% conversion from the first stage.

What The VC Funnel Means For You?

If you are a founder raising your first round, this post above presents some implications for you. Regardless of which firm you are approaching, whether us or another, there will be an internal process within the fund and it is important to be mindful of the following:

Hope this is helpful for founders to see how a VC fund works internally through the VC funnel. In case an investor is reading this and disagrees with the process or has another process internally, would love to know more.

[This post by Nikhil Kapur first appeared on Medium and has been reproduced with permission.]