Why Entrepreneurs Need To Move Away From FOMO

Why Entrepreneurs Need To Move Away From FOMO 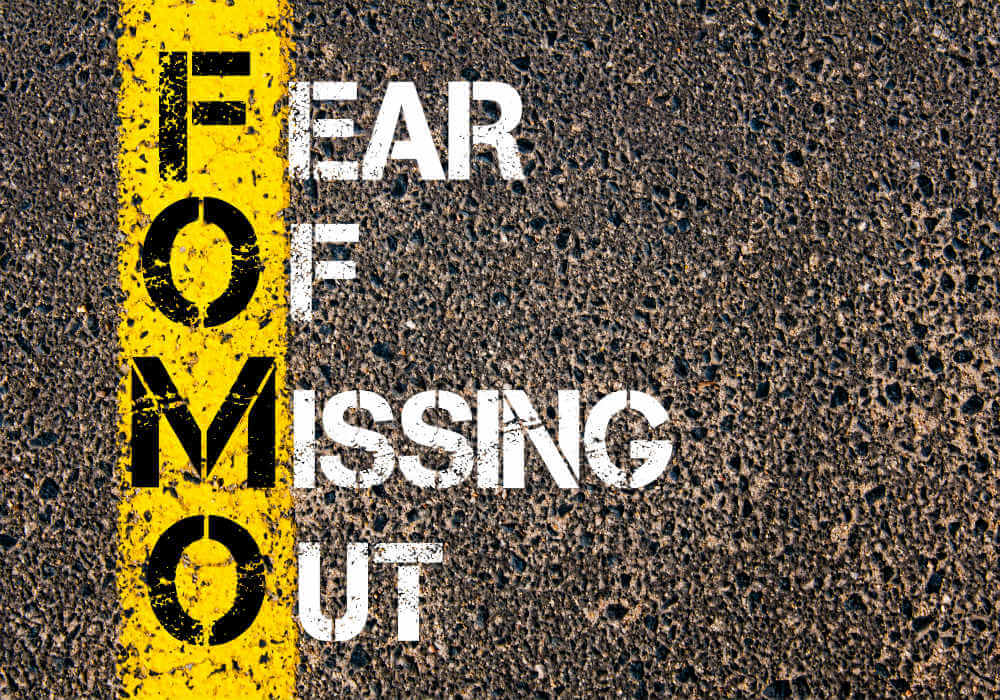 The ‘Fear Of Missing Out’, mainly known by its acronym FOMO has become a much talked about behavioural phenomenon ever since social media has taken over our lives. The word itself became so popular that it was added to the Oxford English Dictionary in 2013!

Until now, FOMO was a term that was applicable to the Internet junkies. However, given its psychological impact, it is now also commonly used to describe a human tendency. Surprisingly, FOMO has taken even the community of entrepreneurship in its grip.

Before we delve further into how entrepreneurship and FOMO are related, let’s first understand what exactly FOMO is.

A study titled ‘Motivational, Emotional and Behavioural Correlates of Fear Of Missing Out’ defines FOMO as

‘‘the uneasy and sometimes all-consuming feeling that you’re missing out – that your peers are doing, in the know about, or in possession of more or something better than you’’.

In this study, nearly three-quarters of young adults reported that they had experienced the phenomenon.

People who are experiencing FOMO are always craving for more and possess ‘I want that or I want to know too’ attitude. If they don’t get what they want, it instils anxiety and depression in them.

Now, let’s understand FOMO in the context of entrepreneurship.

The first FOMO that entrepreneurs experience is related to opportunities. Entrepreneurs are wired to think that there is nothing worse than missing an opportunity that could have changed their life. This opportunity could be an idea, an investor or anything that matters to launching or growing the business – if only I had an opportunity to put my idea into action, if only I could have one meeting with the investor, and so forth.

As an entrepreneur, you should accept that entrepreneurship is all about success, failure, and missed opportunities. It’s good to be ambitious and seek opportunities, but don’t let this become an obsession. Sometimes, you just need to turn down an opportunity and wait for another one. You have to take a leap of faith and learn to say ‘no’. Like Kenny Nguyen, CEO-Founder of Big Fish Presentations and co-author of the book ‘The Big Fish Experience’ did.

He refused to attend the popular reality show ‘Shark Tank’ which gives aspiring entrepreneurs a platform to make business presentations to the investors. Of course, it was a big opportunity but somehow he felt that it was not the right time for him to participate in his venture was only a year old.

Instead, he focused all his energy on making his startup the best among the others. Today, Big Fish Presentations is one of the fastest growing companies in the startup ecosystem. Kenny Nguyen advises his peers to focus on the right opportunity, not every opportunity.

Entrepreneurs also suffer from FOMO on success. Agreed that every entrepreneur wants to become a winner, but success takes its own sweet time to give its taste to you. It’s one thing to have a vision and another thing to forget the journey that takes you there.  You should not let the fear of ‘what my successful business look like’ to stall your today’s efforts to grow it.

Keep the success in mind, but do not expect an instant win. Sometimes, it is better to adhere to the maxim ‘Slow and Steady Win The Race’.  Anu Sharma, the founder of HR Practice firmly believes so and says, “It’s not always the big leap which is needed to start off – it’s fine to take small steps and begin your journey.”

Then, there is also FOMO on a commitment to the company. Give the time, energy, money and emotions that they have invested in their business, entrepreneurs fear of exiting it even if they know that it is heading south in terms of expected targets, revenue, and profits.

This kind of behavior is also known as ‘sunk cost fallacy’ which make them continue running their company even when it is not the best thing to do. They fear on missing out on the possible success the business can bring if they stay invested.

Everyone has (at least they think so!) or is looking for the billion-dollar idea that will put them in the league of Azim Premji, Sachin Bansal, Sergey Brin or Mark Zuckerberg. They want to experience entrepreneurship just for the thrill of it, without thinking it through.

FOMO in entrepreneurship is good as long as it does not make you depressed, stressful or restless. It can have a serious impact on your mental and physical well-being. Every entrepreneurial venture has its own story and journey. You can’t guarantee success or avoid failure – you can only keep working on specific goals and recognize the tradeoffs.