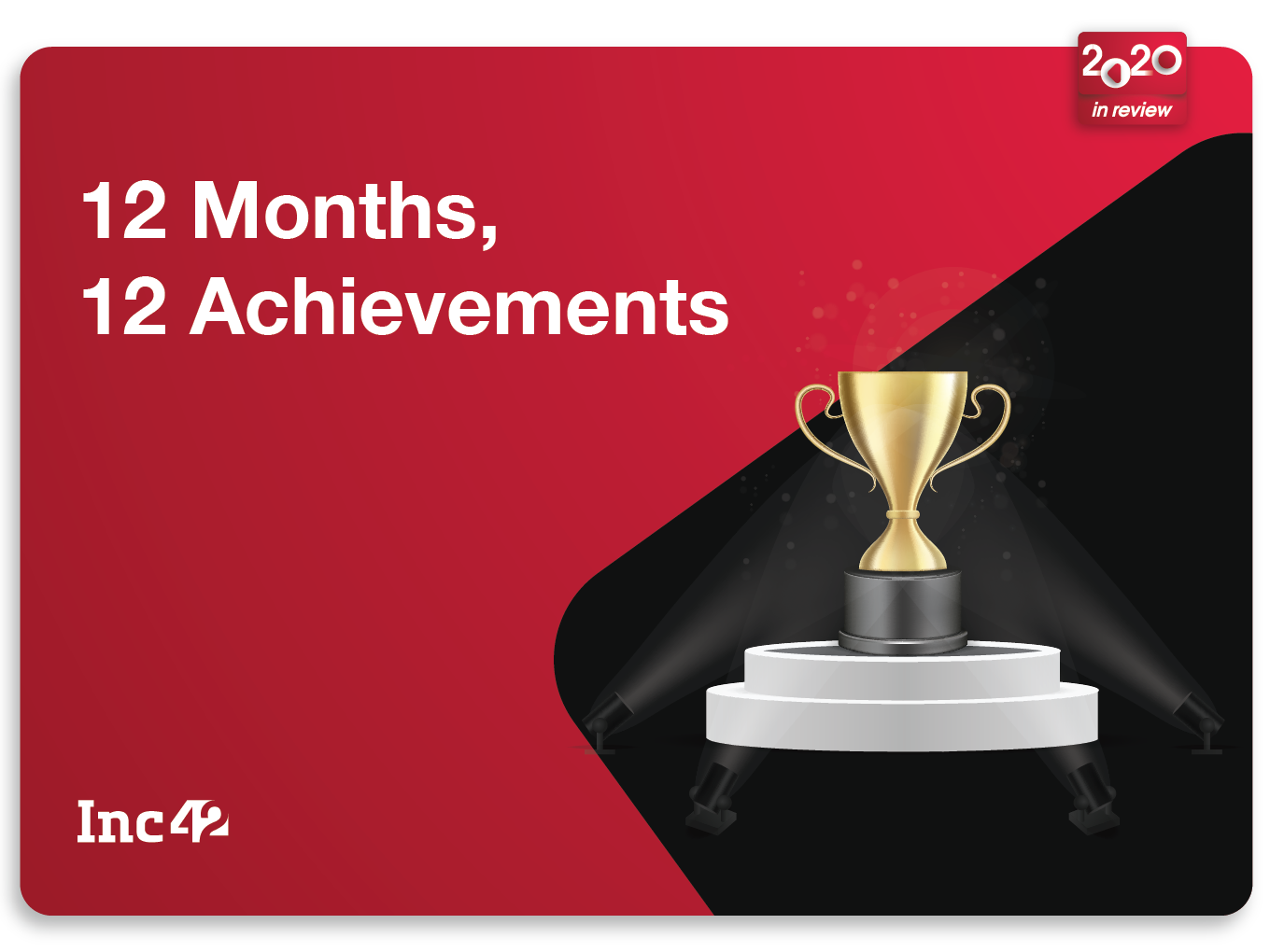 While the pandemic hit many businesses in 2020, there were several positives for the startup ecosystem

A crisis tests everyone, but it also brings opportunities.

While the Covid pandemic — one of the biggest tests for humanity in a century — led to massive layoffs, pay cuts and shutdowns in the entire startup ecosystem, it also opened new avenues and potential for startups in edtech, media and entertainment, ecommerce among other key sectors. Looking at some of the stupendous growth achieved by startups, one can say that Covid helped them find a sweet spot.

Startups in the agritech and healthtech segment also found their niche, attracting investors to their business models. As the market shifted over the months, we saw startups take on new avatars and bold steps to tackle the challenges.

As we bid farewell to 2020, here’s a compilation of all the accomplishments — small and big — that India’s startup ecosystem witnessed this year.

Crisis brings solidarity. Taking the Covid challenge head-on in March 2020, when the number of Covid infections started rising in India, nearly 600 entrepreneurs and investors across the technology industry came together to create a group called “StartupsVsCovid-19”.

Through this group, Udhyam founder Mekin Maheshwari and the founders of Bounce, Homelane, Cred, Urban Company, BlackBuck, MyGate, 1mg, MapMyIndia, venture capitalists from Matrix Partners, Stellaris Venture Partners, among others had multiple discussions to support the government and healthcare professionals in tackling the crisis.

Within a month, the group created an INR 100 Cr fund under the Action Covid-19 Team (ACT), and a digital platform, Droneman, which connected registered drone startups with local government authorities. A telemedicine helpline for four state governments including Karnataka, Punjab, Odisha and Maharashtra and a self-reporting tool for citizens to report Covid symptoms were also launched. The coalition also came up with a social media campaign #ApnaDeshApnaMask which reached more than 3Mn people on Twitter within 36 hours.

To wage a war against Covid, startups rose to the occasion to develop solutions to curb the spread of the disease. They came up with multiple tech solutions such as contact tracing apps, apps for reporting symptoms and targeted communications for spreading awareness about Covid-19 in multiple languages.

Many startups such as Contactrack, TangoEye and others unveiled monitoring tools such as smart cameras, drones and goggles to ensure social-distancing norms were followed, while companies like 10log9 and Myu Ventures developed disinfectants and sanitisation tools.

If demonetisation of Indian currency in 2016 led to the rapid adoption of digital payments in the country, the fear of contacting Covid-19 forced the fence-sitters to finally adopt the digital mode of payments in 2020.

2020 was the year when Indian founders got the opportunity to capture the short-video apps market. Government’s ban on around 220 Chinese apps including TikTok, shareIT, Helo and others left a vast gap for the homegrown platforms to fill in. So we had Chingari, Roposo, Mitron, Bolo Indya, Trell, and MX TakaTak quickly rising to the occasion and giving Indian users a reason to smile, and keep creating short-video content.

Within a day of the government ban on Chinese apps, Chingari’s viewership nearly doubled to 370K users per minute from 187K. Similarly, regional social media platform Sharechat’s Moj app, which was launched right after the ban, saw more than 10 Mn downloads in less than a week.

It was a year of direct-to-consumer or D2C business model. India’s new-age brands now realise the compelling benefits of reaching out to customers directly online. According to Inc42 Plus data, India has more than 350 D2C brands including mattress brands such as Wakefit, Sunday, Sleepycat; fashion startups such as Bombay Shirt Company, Henry & Smith; cosmetics brands such as Sugar, The Man Company, Mamearth, and The Moms Co. Then there are traditional retail players such as Saraf Furniture, Specsmakers, Marks & Spencer and others, who have begun to take their D2C strategy seriously.

The model, unlike using the platform of marketplace players, gives brands the ability to control the margins and connect more closely with their customers.

The ease of setting up standalone websites, new-age marketing tools, logistics partners and digital payments have made it easier for startups to launch and scale D2C. With more than 15K consumer brands in India taking the D2C route in 2020, the segment is expected to see significant growth very soon.

On Track For IPO Next Year

An initial public offering (IPO) is not only a critical exit opportunity for stakeholders, it is an essential milestone for startups seen as the step up to the big corporate league. Every year, many startups announce their plans to go for an IPO and this year too, the same trend continued despite the pandemic.

For instance, Zomato has reportedly appointed Kotak Mahindra Bank as the lead merchant bank for its proposed IPO while online insurance aggregator PolicyBazaar plans to raise $250 Mn in a round of financing at a valuation of $2 Bn, before issuing its IPO in September 2021. Many others, including Flipkart, Droom, Delhivery, and Grofers also hope to fulfil their IPO dream in 2021.

With a nationwide lockdown keeping people restricted within the four walls of their homes, the biggest demand spike was witnessed by digital content providers in the country.

Be it digital news, short videos, online gaming or movie streaming, there was an unprecedented demand for content from consumers.

Edtech has undoubtedly been one of the biggest gainers in the pandemic. Since the lockdown was announced in March 2020, BYJU’S added 33 Mn users to its platform amounting to a total user base of 75 Mn, while Unacademy’s user base grew 3X to 40 Mn.

According to Inc42 Plus estimates, edtech startups raised more than $1.43 Bn across 100 deals between January 1 to December 15, 2020. Of the total funding for edtech companies, BYJU’S accounted for about 57% share in the segment, whereas the latest unicorn Unacademy accounted for 10.4%, while Vedantu had a 9.5% share in the overall funding for the sector.

While healthcare workers worked relentlessly on the frontlines of the pandemic, many healthtech startups also did their bit by offering online healthcare services and many cutting-edge technologies.

According to Inc42 Plus data, preventive healthcare in India is expected to reach a market size of $170 Bn by 2025, primarily driven by fitness and wellness apps and diagnostics solutions. As social distancing became the norm, it opened the market for telemedicine startups such as Practo, mFine, Lybrate, and DocsApp. Many mental health startups such as Wysa, Headspace also got a fillip from the pandemic.

Even as many startups were struggling to survive in 2020 due to cash crunch, there were 11 of them — Unacademy, Pine Labs, FirstCry, Zenoti, Nykaa, Postman, Zerodha, Razorpay, Cars24, Dailyhunt, and Glance — became unicorns this year.

Except Pine Labs, all the 11 unicorns were founded after 2009. On an average, it took the 10 startups (excluding Pine Labs), 7.3 years to reach the unicorn club. InMobi subsidiary Glance, which was founded only in 2018, is the fastest to reach the billion-dollar valuation and Unacademy is the second edtech startup, after BYJU’S to become a unicorn.

According to Inc42 Plus data, the SaaS sector attracted more than $817 Mn investment in 2020, the highest in the last six years (the period for which data is available).

Agritech Comes To The Fore

We can say that Agritech finally arrived in 2020. The disruption of supply chains seen in the pandemic year led to increased demand for technologies such as smart farm monitoring, supply chain efficiency, and market linkages among others. Startups like Ninjacart, WayCool and MeraKisan were in the spotlight in 2020.

Apart from the mainstream agritech investors such as Omnivore, Ankur Capital, known for having a big portfolio of agritech investments, the segment witnessed entry of the likes of Nabventures, Arkam Ventures, Avaana Capital who, until 2020, were watching the space from a distance.