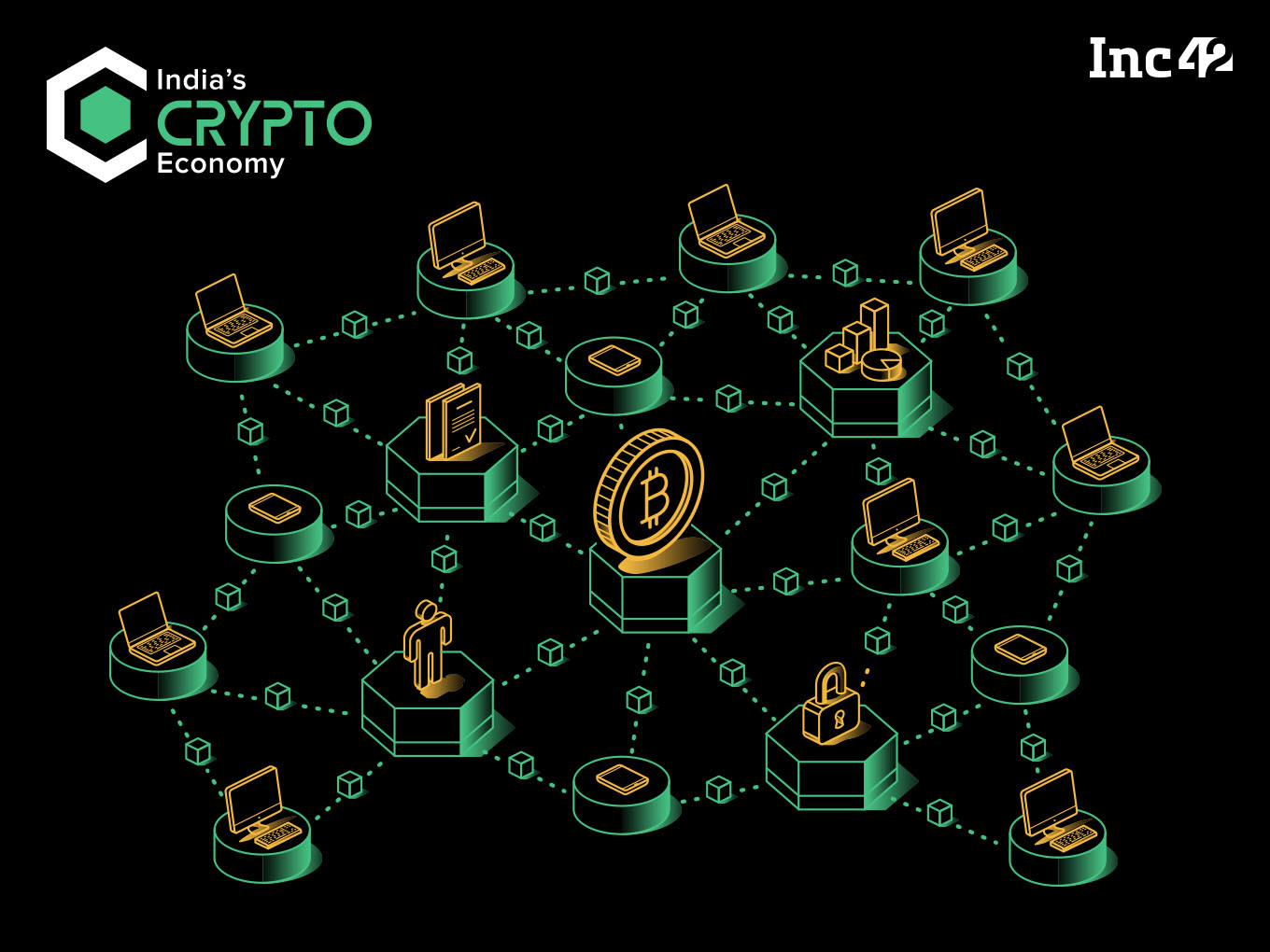 India is known globally for its massive pool of software engineers, but why does it lack blockchain experts?

Will blockchain technology play a key role in our everyday life? No, we are not talking about some far-off days when the full potential of this robust, decentralised power will be revealed. According to the World Economic Forum, more than 10% of global GDP could be stored on blockchain systems by 2025. And that is near enough.

By eliminating the need for intermediaries, blockchain technology can disrupt the global economy (and nearly every sector, for that matter), believe experts. Be it fiat money or the BFSI sector, distributed finance (DeFi) has already impacted these verticals while NFTs are paving the way for the creator economy.

According to a market research firm Reports and Data, the global blockchain technology market is growing at a CAGR of 66%. It is estimated to reach $172.9 Bn by 2028 from a meagre $3 Bn in 2020, primarily because a trigger has arrived. After the great recession of 2008, the global trade slowed down partly due to a lack of transparency and interoperability. Blockchain will drive the global demand for offering transparent and secure payment systems across banks and other financial institutions, believes the World Bank.

So, here is the most pertinent question of the day: Is India, popularly known as the talent pool of the world, ready for a blockchain spurt? In other words, do we have an adequate number of trained professionals to take care of our new-age technology requirements? 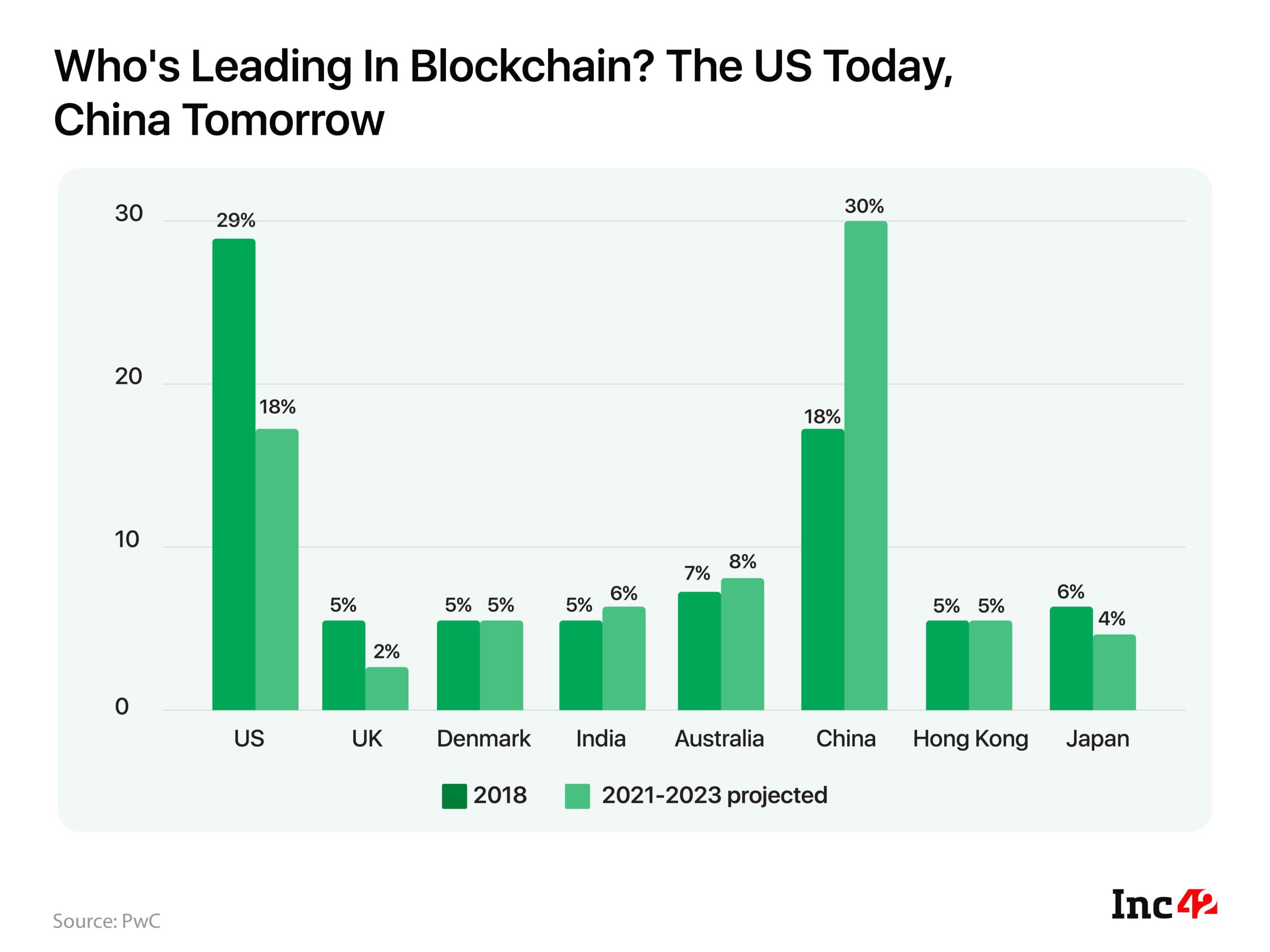 The lack of talent in this space has led to an unprecedented salary boom. Lately, blockchain developers have seen a 2,000-6,000% salary hike, and they are currently paid 50-100% more than what conventional developers earn.

Inc42 has analysed the blockchain jobs posted on jobs portal Naukri.com and found that expertise in blockchain technology is one of the most sought-after skill sets. Traditional IT/ITeS companies, from TCS and Infosys to Accenture, Tech Mahindra and Wipro Infotech, are now keen to hire blockchain developers. 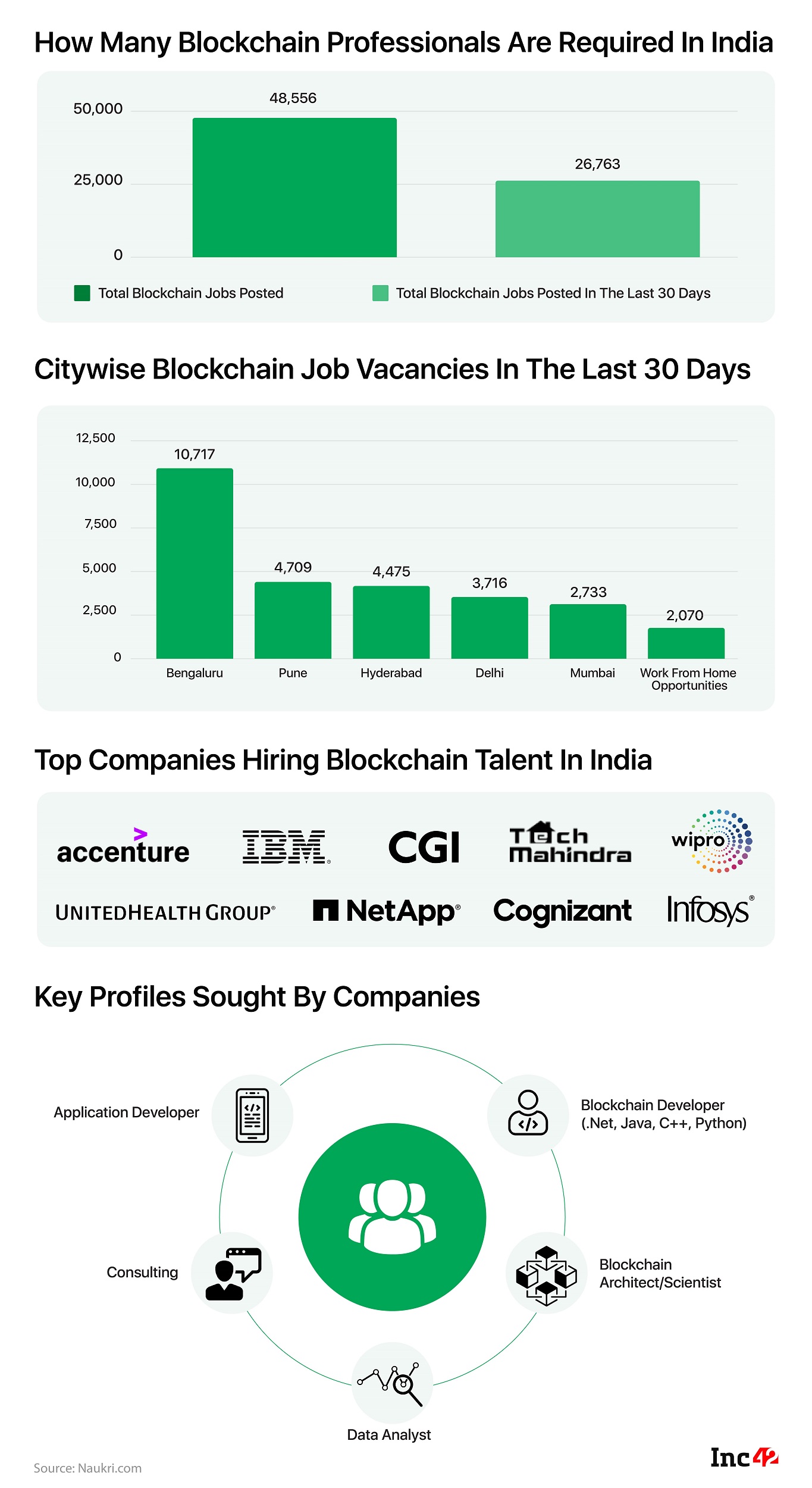 Globally, India is known for its massive pool of talented software engineers. But the country has taken too long to recognise the potential of blockchain and the need to develop a pool of trained professionals for national and global requirements. According to a study by Belong, a Bengaluru-based hiring solutions firm, only 0.25% of India’s software workforce is blockchain-ready. 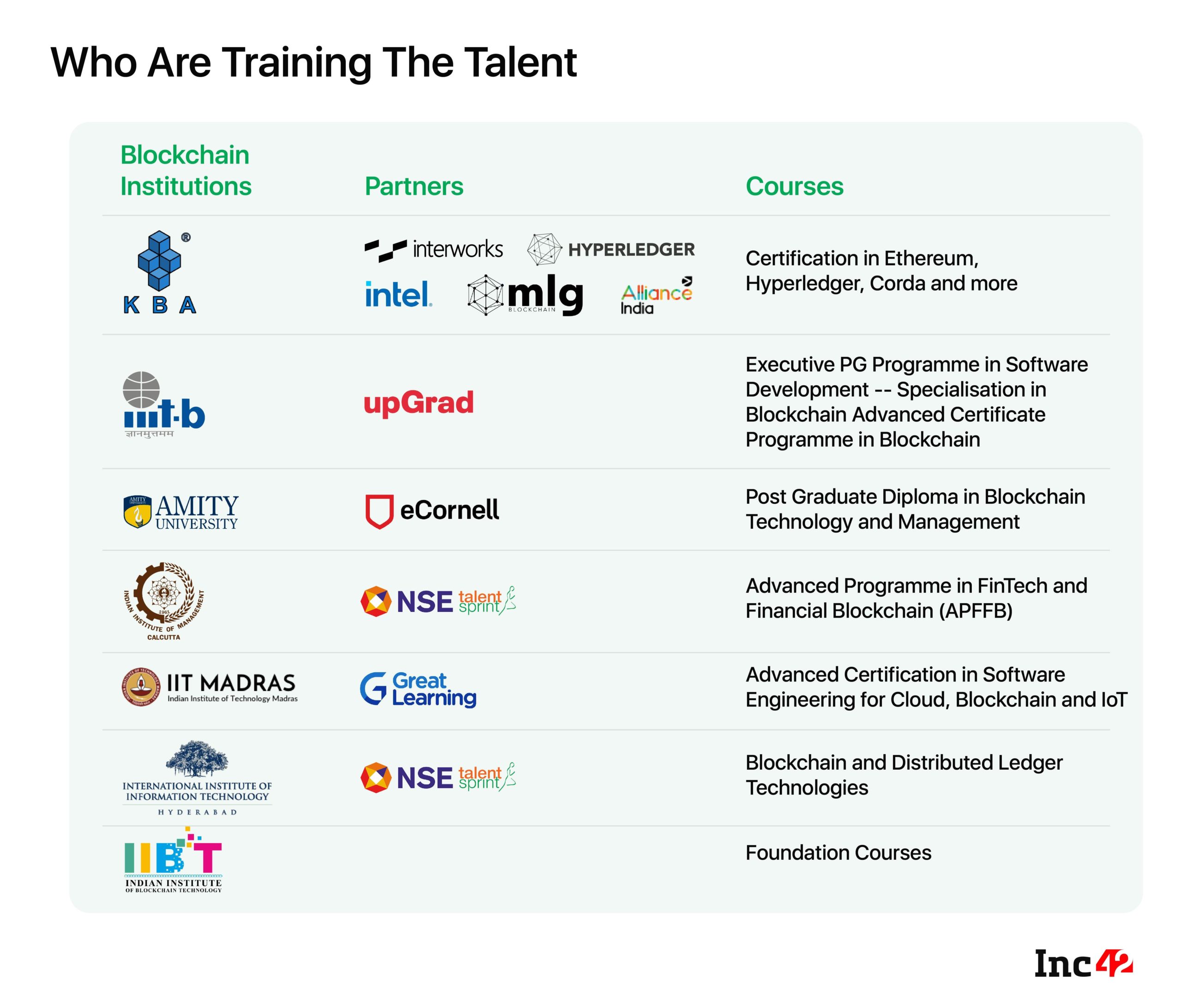 Interestingly, these premier institutions have partnered with startups like UpGrad, TalentSprint, Great Learning and others to offer blockchain-based courses. But barring the Kerala Blockchain Academy, none of these institutions currently provide R&D facilities in blockchain technology.

But given the current scenario, India needs to introduce more courses and set up dedicated academies to catch up with the likes of the US and China. Spreading tech knowledge and tech education at all levels will help build the blockchain talent pool and put India in the driver’s seat in the innovative and competitive distributed ledger technology (DLT) space. 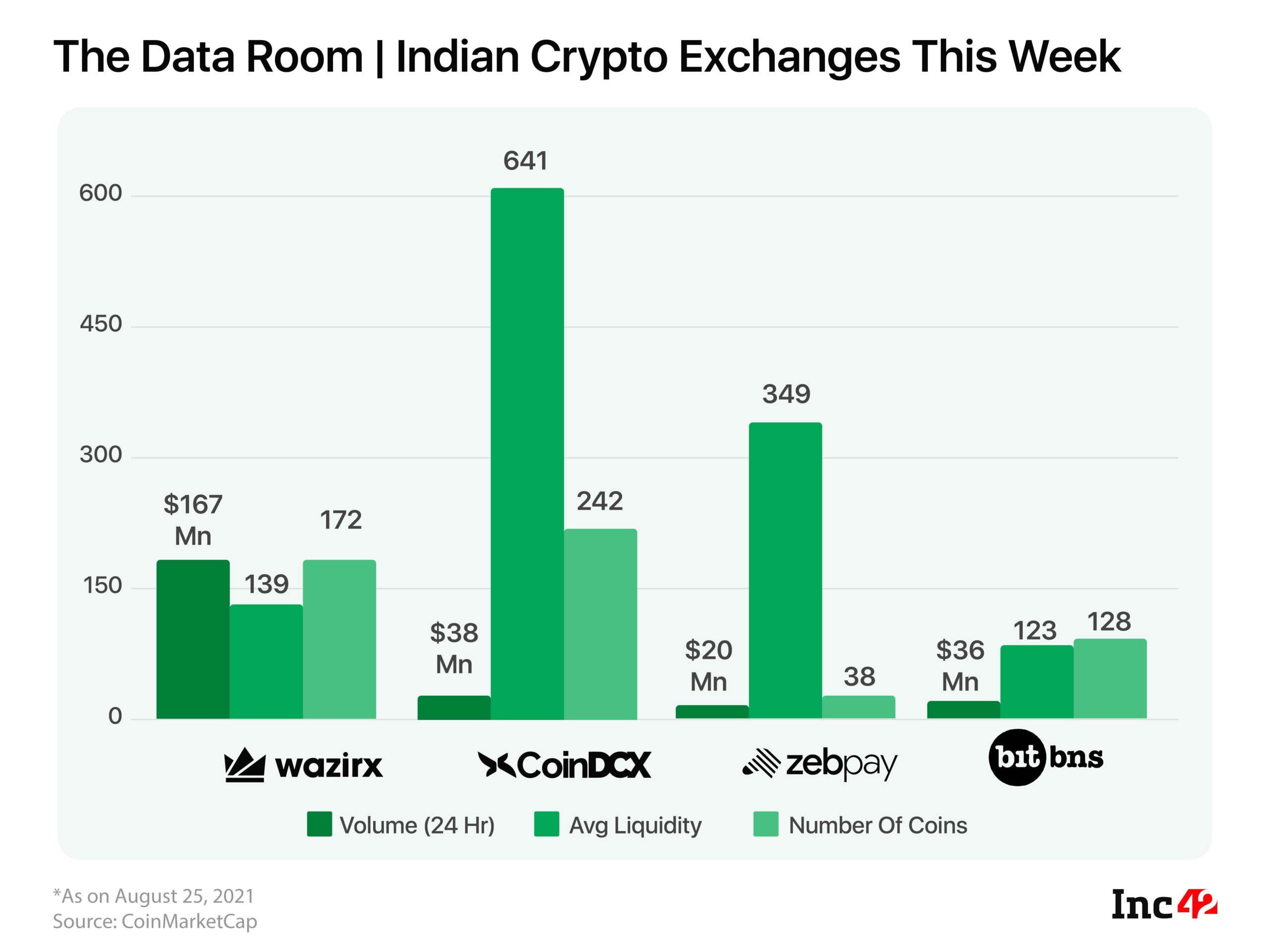 Crypto Investments On A Blast: In the first eight months of 2021, VCs have invested more than $17 Bn into crypto and blockchain startups. While India-based CoinDCX raised $90 Mn in Series C funding and became the first-ever Indian crypto startup to enter the coveted unicorn club, Canada-based bitcoin infrastructure startup Blockstream recently raised $210 Mn at a valuation of $3.2 Bn. Carlos Betancourt, founding principal of BKCoin Capital, delves into the VCs’ FOMO when it comes to crypto. Read it here.

In Afghanistan, People Move To Bitcoin: As the country’s local currency Afghan Afghani bites the dust, people are quickly adopting cryptocurrencies to access the global economy and safeguard their assets from future instability. This CNBC report takes a look at the fast-evolving scenario.

For the Tweet Of The Week, we have shortlisted a tweet from an Afghan girl Bibi Janey who argues that the Islamic Emirate of Afghanistan must adopt a bitcoin standard and avoid borrowing money from abroad. 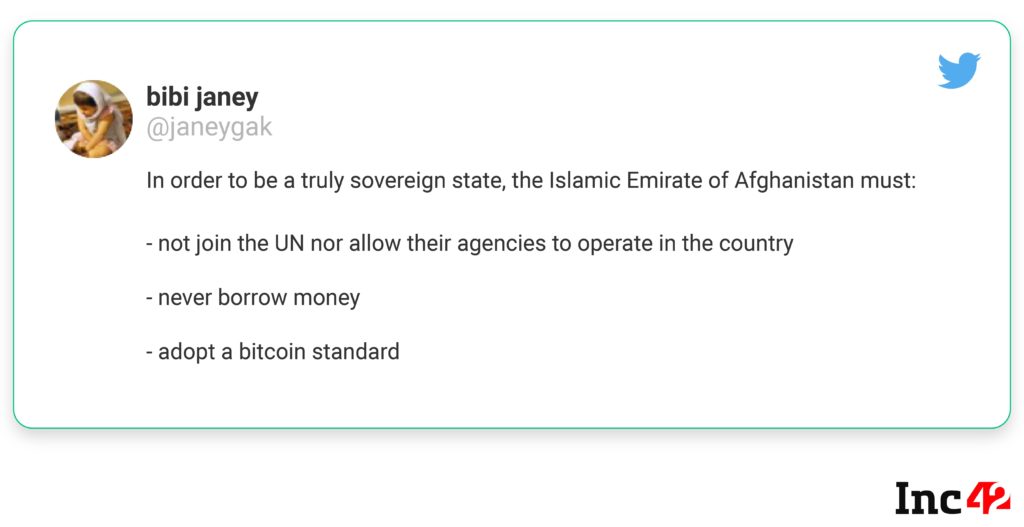 India’s leading crypto exchange CoinDCX joined the Advertising Standards Council of India (ASCI), a self-regulatory voluntary organisation, and would abide by its advertising guidelines. This would help raise the bar for transparency in the Indian crypto space and further boost users’ confidence, said Sumit Gupta, cofounder and CEO of CoinDCX.

Based on the data from LocalBitcoins and Paxful, Chainalysis released the Global Crypto Adoption Index 2021, where emerging economies took the lead. While Vietnam topped the chart, India bagged the second spot, thanks to increasing P2P trade volumes.

PayPal To Allow The UK Users To Transact In Crypto

In a bid to expand its crypto consumer base, payments giant PayPal has allowed its UK-based users to buy and sell in crypto. The company is currently accepting payments in bitcoin, ethereum, bitcoin cash and litecoin. These cryptos can be purchased through bank transactions or via debit cards. PayPal offers similar services to its U.S. customer base.

Remember the $600 Mn crypto heist at San Francisco-based Poly Network earlier this month? Well, the unknown hacker or hackers’ group returned every bit of the money stolen. Incidentally, Poly Network is a startup known for its interoperability solutions for multiple chains.

Not every company gets so lucky, though. In 2018, Indian crypto exchange Coinsecure had to shut shop after a $3.5 Mn crypto heist.

On a lighter note, after returning $600 Mn worth of crypto, has the hacker set a new ethical standard for crypto heists?? What do you think?