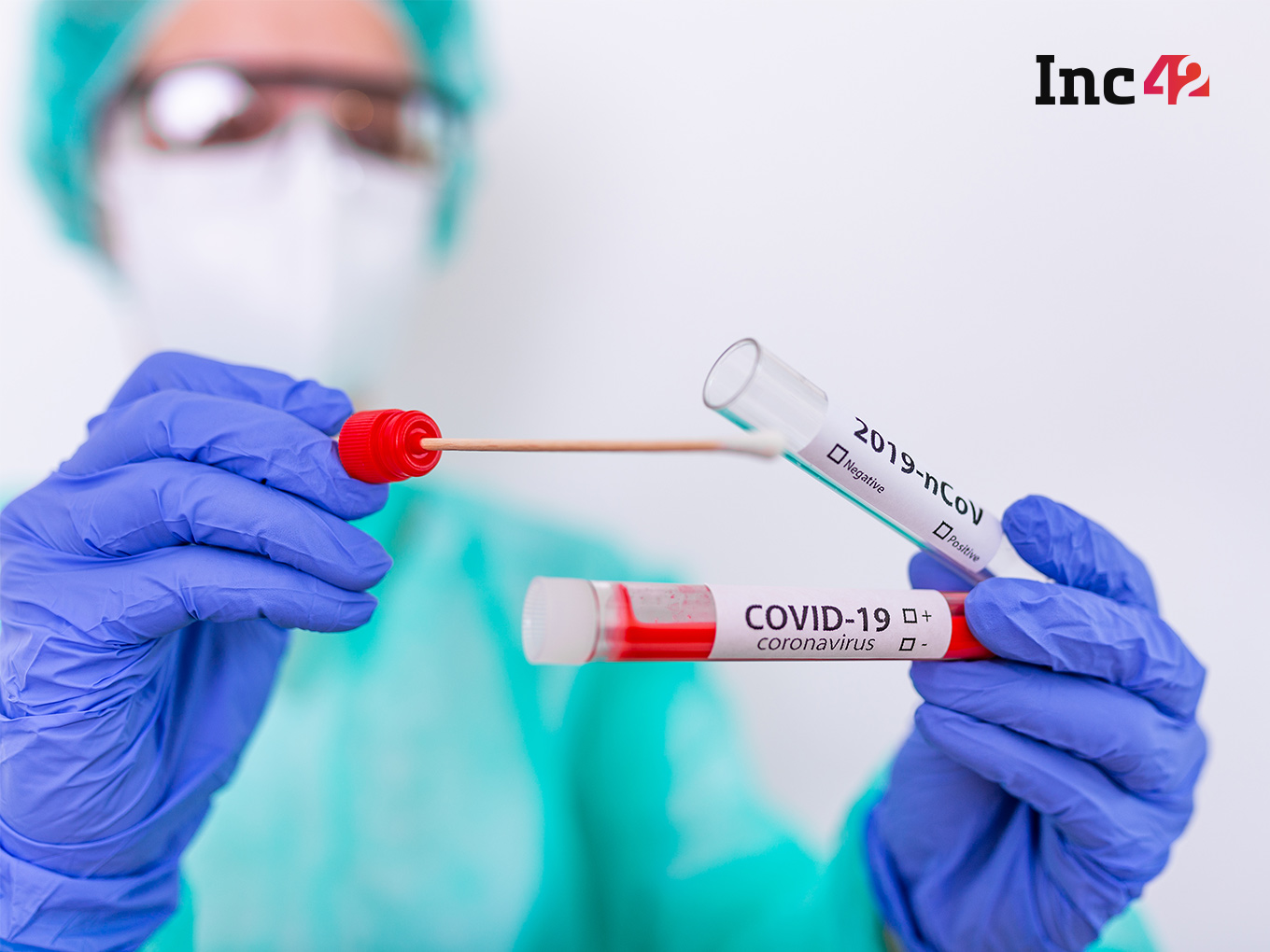 Labs and hospitals are overburdened by testing samples and hence the delay in testing, say healthtech and diagnostics startups

Many of the healthtech startups such as Practo, Portea, Healthians offering diagnostics solutions have limited options in limited cities

All rallies, mass gatherings must be stopped immediately, if we are serious about Covid 19 spike, experts suggest

At a time when people are fighting for their lives, running after oxygen cylinders and beds in hospitals for their near and dear ones, India’s key political leaders and top office bearers are busy fighting elections, organising massive rallies. The state of cold-bloodedness of these office-bearers could also be understood by the fact that even as the daily cases of Covid in India has crossed 2.73 Lakh, state governments and central government have chosen to somehow ignore this by actively organising roadshows and allowing some of the biggest massive religious events that have only worsened the situation.

The chance of getting positive has just doubled. If we consider the daily testing data vs daily cases, out of 13.56 Lakh people tested on April 18, more than 2.73 Lakh tested positive. This amounts to the highest ever 20.19% of the total tested. This once again reflects the poor practices adopted by the Indian national healthcare administration. The situation could be understood by the fact that last year, when the first wave was on its peak on September 16, only 97K people were tested positive out of the 9.78 Lakh tested, a rate of 10%.

In the last year, ‘test, trace, isolate and vaccinate’ have emerged as the four key tried-and-tested weapons in the fight against Covid. However, has India been able to build its infrastructure around these four key verbs to fight on a scale that is needed?

Sadly, the answer seems to be no and many of the healthtech and healthcare experts and startup founders said India is far behind what was needed. Even healthtech startups that are driving the telemedicine market need the support of the national government to enable their services. Lacking this, it would seem India is indeed worse off than it was a year ago.

As Inc42 covered last year, regulatory clarity fuelled the expansion of healthtech startups such as Practo, Omnicuris, Metromedi, Curefit into telemedicine, backed by leading hospitals as Fortis, Max Healthcare, Fortis and others. But today, given the woeful state of the healthcare system as evidenced by the new surge in cases, not many healthtech startups want to expand their Covid-related services. So how did things get so bad? Covid-Related At-Home Services Have Gone For A Toss

In states such as Delhi and Maharashtra, the test machinery just lags by huge margins than what is required on the ground.  In Delhi, the standard reply from pathology giant SRL Diagnostics’ customer care was “Sorry, all slots are booked. We will not be able to collect samples before upcoming Tuesday (4 days later),”

Many other healthtech and pathological testing platforms simply declined to take our booking for Covid-19, claiming that home collection of testing fluids is currently on hold. “There is a massive rise in testing demands particularly in cities like Delhi and Bengaluru etc,” said an SRL Labs employee. 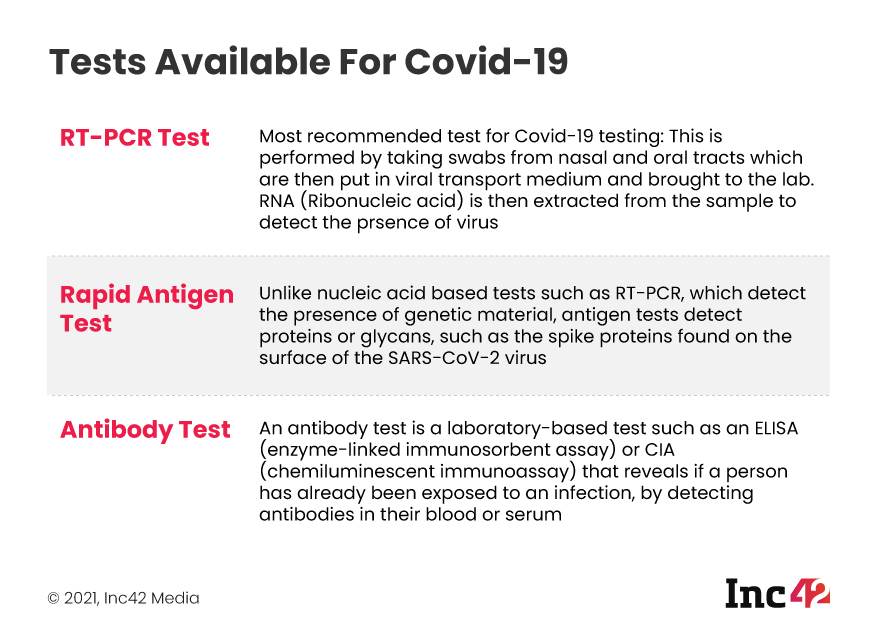 The labs are overburdened with samples that they have not been able to clear in due time. Some labs, particularly the government labs such as the National Institute of Cancer Prevention and Research (NICPR), Delhi, have even stopped conducting tests during peak time. According to a report in The Print, the NICPR had run out of their consumables and items such as barrier tips, flowmeters, flasks, safety equipment among other things needed for conducting tests. Among private labs, Thyrocare has stopped taking bookings for Covid 19 RT-PCR tests citing ‘No slots are available.’

Bengaluru-based Practo, in association with Thyrocare, had enabled Covid 19 testing in March last year, across various cities in India. But it has stopped online booking and home collection for Covid 19 RT-PCR testing in Delhi, Mumbai, Pune and Ahmedabad, and many other cities. The other tests such as Covid antibody test are however available in these cities. The company has also shut down its customer care contact number and ask customers to only contact through emails.

Among other startups such as 1mg, mfine, Healthians, Portea Medical, and others, there has been a huge spike in terms of Covid testing demand.

Bengaluru-based telemedicine startup MFine currently offers online booking for Covid testing in Delhi, Gurgaon, Noida, Bengaluru, Hyderabad, and Chennai. CEO Prasad Kompalli said that the numbers of Covid tests being booked on the platform have grown 3x in the last couple of weeks. “Looking at the surge in demand, we are onboarding new partners and are expecting to further double this scale.”

Portea Medical which offers testing across the major cities, currently has a one-day waiting period for RT-PCR test in Mumbai and Bengaluru. While the company is currently not offering RT-PCR Test in Delhi.

Similarly, diagnostics startup Healthians currently has a waiting period of two days across all its locations. The antibody tests are however available.

Dr Varun Gupta, SVP of 1mg Technologies, which has recently raised funding from Tata Group, told Inc42 that due to unprecedented Covid surge, the demand for RT-PCR testing has increased manifold. There is a very high demand as people are seeking safe home based collections. Most consumers do not want to go out to places that could have other people with infections, and hence services like ours are seeing a huge demand.

“Covid-19 testing labs in the country are swamped with samples. We are working in double shifts to actively increase the capacity of COVID 19 sample collection and processing. So no lab has stopped testing but there is a backlog that is being actively solved by increasing the testing capacity,” said Dr Gupta. 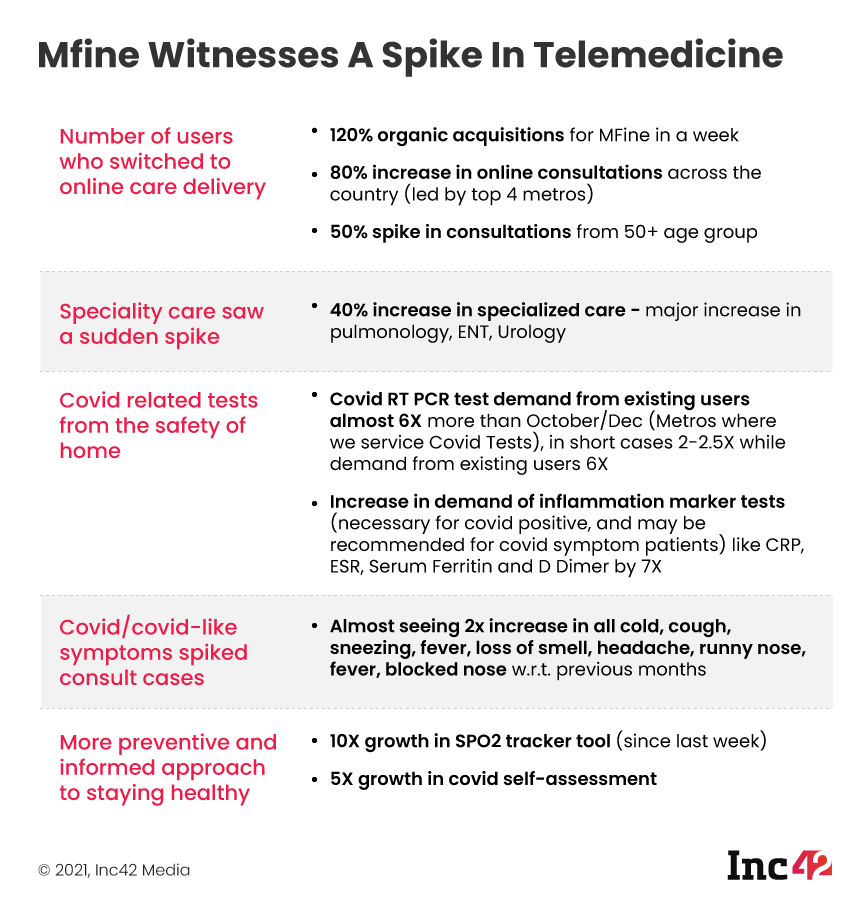 Not only is the pressure to stop testing in many states creating a backlog of potential cases, it has also hampered the operations of startups. In UP, executives working at collection centres of diagnostic chains Dr Lal PathLabs and SRL Diagnostics said they have not been collecting samples for Covid testing for close to 10 days because of orders from the administration, according to various reports. Similarly, in poll-bound states like West Bengal and Assam, testing for Covid-19 has drastically fallen since January this year.

This has also impacted startups who have partnered with these labs in UP and West Bengal for the RT-PCR and other tests. These platforms as a result are unable to cater to the test demands in these locations.

A founder of a telemedicine startup that offers antibody tests, told us on the condition of anonymity that there’s no direct pressure from the authorities as such, but it is the pressure tactics on labs which has created issues. If labs refuse to process the samples, startups cannot continue to take orders, the founder said.

Let’s Talk About The Quick Fix

On learnings in the last year, 1mg’s Dr Gupta said that the industry now knows the challenges better and has the systems and processes in place. Most importantly, the players know that it can be managed. “Last year we were shooting in the dark and trying many things, now we know what we need. However, we were still not ready for this scale of an issue. Also, there was a sense that Covid was subsiding, so the supply chains had slowed down and refocused. So we face somewhat different challenges now.”

In order to address the scalability issue of testing, experts suggested that there is a need to further de-bottleneck each process of testing and make them much more efficient.

Typically, RT-PCR tests take at least 4-5 hours to be processed after a sample is collected and reaches the lab. The last step involves data entry, which needs to conform to a format laid down by the Indian Council of Medical Research, which increases the turnaround time.  “We need better and more seamless data management and need to digitise the manual parts of the process. Secondly, we need an economic model to encourage labs and entrepreneurs to set up capacity: – a stable pricing policy is a must to enable companies to invest in capacity building. There are frequent changes and guidelines vary across different states,” Dr Gupta added

Besides saying that the rate of vaccination must be doubled, mFine’s Kompalli suggested that the first step has to be stopping all mass gatherings. Home services must be promoted so that hospital beds/ICUs are only given to the most vulnerable. Other experts suggested that testing needs to become decentralised and needs to become available at an apartment or housing colony level. Right now, the whole process takes a lot of time. And time is precious when it is a matter of life and death.