After Prime Minister Narendra Modi and Facebook CEO Mark Zuckerberg changed their profile photos on Facebook supporting Digital India, a number of Facebook users have changed theirs as well. The picture uses an Indian Tricolor filter, much like the rainbow filter used during Facebook’s “Celebrate Pride” campaign.

I changed my profile picture to support Digital India, the Indian government's effort to connect rural communities to…

Thanks Mark Zuckerberg for the support. I changed my DP in support of the efforts towards a Digital India. You too can change your DP at fb.com/supportdigitalindia

However, there seems to be a hidden agenda behind this move by Zuckerberg – Internet.org – Facebook’s much-criticized anti-net neutrality platform which has been renamed to ‘Free Basics’.

On uploading this picture and checking the source code of the page will reveal that the picture does not support Digital India, but instead it covertly supports Facebook’s Internet.org initiative.

The style class has been named as”_internetOrgProfilePicture__prideAvatar”.

Nikhil Vishnu, cofounder and CEO of Mobapper and Voltella was the first to discover this hidden motive. In his Facebook post, he stated, “I don’t think this is accidental. So what I am promoting here – Internet.org or digital India campaign?”

“I am really excited to see what’s happening in Silicon Valley Now. It is giving all of us in technology business immense hope about the future. But On the same time I am worried about how companies in valley using this opportunity to promote their agenda in wrong ways,” he added.

In a response to DoT, Facebook has announced that 17 million people have supported the Internet.org service. The company published all the comments it received. However, most of these comments were sourced from the poll that the company ran where users were supposed to answer to the question – “Do you want India to have free basic internet services?”, with just two option; Not Now and Yes, I’m In. There was no option of answering “No”. This means that Facebook wants users to like Internet.org either now, or later; not liking it was not an option. 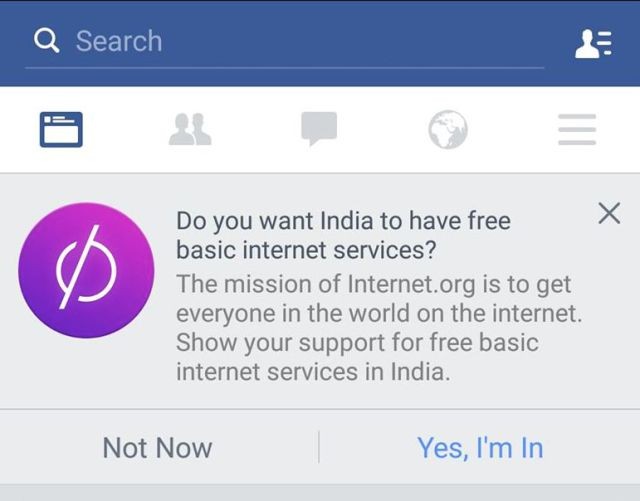 Internet.org is an open platform offered by Facebook across 19 developing countries, including India. It aims to enable easy access of selected apps and app-based services to people at zero cost. In India, it has partnered with Reliance Communications to offer free access to about 30 websites.