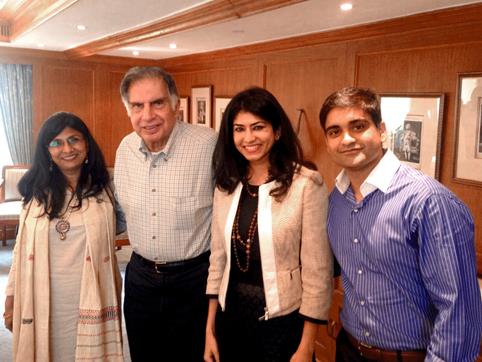 Gurgaon-based cashback & coupons site, CashKaro.com, has raised an undisclosed amount in funding from Ratan Tata, the Chairman Emeritus of Tata Sons. The investment is made by Tata in his personal capacity.

Founded in 2013 by entrepreneur couple Swati and Rohan Bhargava, CashKaro, works on an affiliate model and offers users cashback & coupons across 1000+ partner websites including Amazon.in, Snapdeal, Paytm, Shopclues etc. Besides, its members can also compare prices & discover products on its portal. It receives a commission from retailers from which it pays Cashback.

The company has over 10 Lakh registered users on its portal and receives over 5 Mn page views every month. It has already credited INR 30 Cr. in real cash as cashback to its members and looks to cross INR 1000 Cr. in GMV in the next few months.

Speaking on the development, Swati & Rohan Bhargava, co-founders at CashKaro.com said, “The funding from Ratan Tata marks another milestone in CashKaro’s three-year journey. We are privileged to have him come on-board as an investor. An investment by him is an affirmation of the opportunity that CashKaro is addressing and the relentless efforts of the team towards building a large, valuable savings destinations that millions of Indians love. His expertise and insight will be immensely helpful as CashKaro.com expands to newer markets and pursues an aggressive customer acquisition strategy.”

The funding comes just two months after the startup raised about $3.7 Mn (INR 25 Cr.) in its Series A round funding led by Kalaari Capital.

Ratan Tata is on the Advisory Board of Kalaari Capital and lends his expertise to guide and mentor Kalaari portfolio founders.

Prior to that, CashKaro had raised $750K in 2013 in angel funding from London-based investors from companies like Paypal, Investec, Goldman Sachs etc.