Cashkaro Raises $3.7 Mn Series A From Kalaari To Spice Up Couponing In India

Cashkaro Raises $3.7 Mn Series A From Kalaari To Spice Up Couponing In India 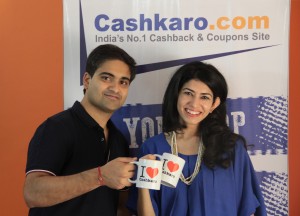 The company had earlier raised $750K in 2013 in angel funding from London-based investors from companies like Paypal, Investec, Goldman Sachs etc.

Cashkaro will utilise the funds raised to expand globally and to upgrade technology. “We will use the money for international expansion in markets such as Indonesia, Singapore and other nations in southeast Asia,” said Swati Bhargava, CEO at CashKaro.

Swati had worked at Goldman Sachs London for five years before starting UK Cashback business Pouring Pounds with her husband Rohan. After UK’s success they expanded to India as Cashkaro.com in August 2013.

CashKaro, works on an affiliate model and offers users cashback & coupons across 1000+ partner websites including Amazon.in, Snapdeal, Paytm, Shopclues etc. Besides, its members can also compare prices & discover products on its portal.

The startup receives a commission from the retailers from which it pays cashback. This cashback is in the form of real cash which is paid over and above all other coupons & discounts. The company claims to have credited over INR 20 Cr. as cashback to users on its site in the last two years.

Growing at over 30% month on month, CashKaro is aiming to cross INR 1000 Cr. in GMV and credit more than INR 35 Cr. as Cashback in next couple of months.

Speaking on the development, Swati & Rohan Bhargava, said “Affiliate sites account for 15-20% of ecommerce sales in India and because the model is performance based it is also recognized as a key marketing channel for retailers. With infusion of these funds, we plan to take CashKaro to new markets and pursue an aggressive customer acquisition strategy while focusing on extending our mobile initiatives including launching the CashKaro mobile app.” The app will be launched on Android and iOS platforms in 2016.

Other players in this space (coupon and cashback) include Cuponation, Couponchaska, Mydala, PennyFul and Times Internet-backed Coupondunia. Mydala is also in talks to secure a $80-90 Mn round. Earlier in September, LafaLafa, a mobile-first coupons and cashback app, was selected for 500 startups Accelerator Program and had received a seed investment of $125K as a part of the program.