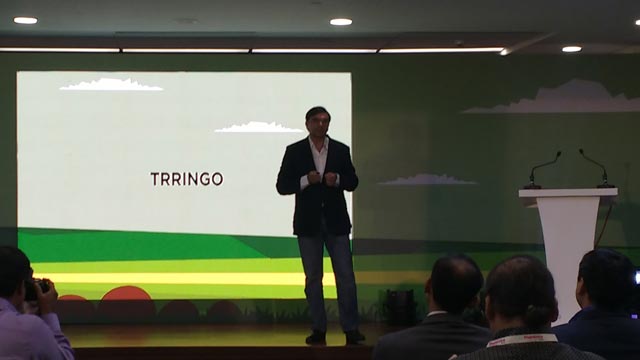 Trringo will provide tractors and farm equipment on a rental basis to the farmers. It claims to bring in digital technology to the tractor rental business and will help in connecting farmers through an app or a call (call centre).

Trringo is scheduled to start operations in June 2016 and scale up to five states including Maharashtra, Karnataka, Gujarat, Madhya Pradesh and Rajasthan by August 2016. M&M plans to invest above INR 10 Cr in the new business.

Rajesh Jejurikar, President and CEO of Mahindra’s Farm Equipment, said that the move will help increase mechanization levels at farms, which is around 35% currently, and organize equipment hiring, a practice that existed for many years.

Trringo will operate on a franchisee-based model, wherein it will offer a digital platform to connect consumers looking to hire tractors and those willing to rent their self-owned machines. It will have a location-based mapping system that will bring the two together and route them to the closest franchise. This will be similar to Mahindra First Choice – the pre-owned car sales business by Mahindra.

Initially, Trringo plans to set up 80 franchises and 160 hubs for operations. Later, it will work  to replicate the idea outside India, where Mahindra has presence.

Rajesh added that since the new business is a franchisee-based asset-light model, the cost to the firm will not be high. It will follow a two-way revenue model, i.e., royalty paid by the franchisee and a commission fee on each tractor let out by the franchise.

The company estimates that the size of the tractor hiring market is about INR 15,000 Cr yearly and according to Tractor Manufacturer Association, the sales dropped by 13% to 422,997 units in the last 10 months (as recorded in January 2016). Mahindra’s new venture will prove an edge by renting tractors and farm equipment at this point of time.