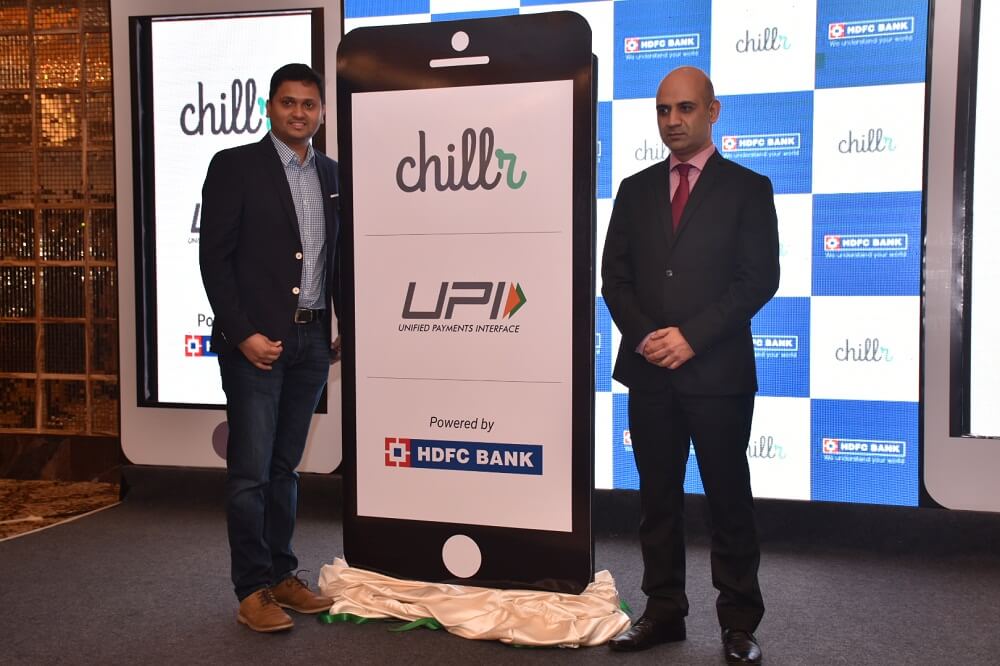 Banks plus fintech is better than banks versus fintech.

This seems to be the mantra behind the ever-increasing collaboration between banks and fintech startups. HDFC Bank took yet another step in this direction and launched the Unified Payment Interface (UPI) on peer-to-peer payments app Chillr. Consequently, the HDFC bank UPI will now be available on Chillr too, besides its own mobile banking app.

Chillr has been running on IMPS with 11 banks prior to this launch and claims a monthly transaction value of $77.2 Mn (INR 500Cr). With this launch, this base will expand as 33 more banks will be able to use it besides the existing 11 banks. As a result, Chillr co-founder Sony Joy stated that Chillr is now targeting a monthly transaction value of $1 Bn. He also added that the startup expects to see 10 Mn active transacting users by the end of the year.

Sony added that the biggest problem for Chillr was bank integrations. But with UPI coming into the picture, it is no more a hassle to integrate with a larger number of banks., Chillr is accessible practically to anyone with a bank account with 45+ banks onboarded. Consequently, its addressable market almost becomes 25x of the existing one.

The startup raised a Series A round of funding with $7 Mn from Blume Ventures, Unicorn Ventures, Sequoia Capital and others in December 2015.

Nitin Chugh, Country Head digital banking HDFC stated that besides Chillr, which started working with HDFC in 2015, the bank has been working with more than 20-25 fintech startups. He also revealed that, currently, as far as the daily volume of UPI transactions being conducted is concerned, HDFC is among the top three banks.

In August 2016, then RBI Governor Raghuram Rajan unveiled the UPI – Unified Payment Interface. The app was launched to help simplify peer-to-peer transactions. At that time, it was announced that UPI was adopted by 29 banks, 15 of which already have incorporated the app in their mobile-banking system. HDFC Bank,  ICICI Bank, Axis Bank and a few others were among the notable financial institutions to integrate UPI early on.

Last year, the bank had selected five fintech startups to work with in the areas of artificial intelligence, quality assurance, mobile, and biometric payments as the winners of HDFC Bank’s Digital Innovation Summit. These included Senseforth Technologies, Tagnpin, Safe to Pay, Bugclipper Technologies, and Tapits Technologies.