Over the past week, Zomato’s share price touched a high of INR 147.30, minutes after market opening on July 27, but later fell sharply to INR 124 on July 28

However, Zomato still faces a barrage of financial and regulatory risks before it can start proving itself in the long run on the stock market

More than a week after Zomato’s debut in the public market, the company’s shares were trading at INR 133.50, which is 15% higher than its listing price on market close on Friday (July 30). And Zomato’s rather robust performance in the first week on the stock exchange has seen several brokerage houses including JM Financial Institutional Securities Ltd and Jefferies India Pvt. Ltd, and UBS Securities Asia Ltd among others indicating strong buy advisory.

Zomato debuted on the BSE and NSE on July 23 at a listing price of INR 116, which in turn was a 52% premium when compared to the INR 76 offer price for the IPO. Over the past week, Zomato’s shares touched a high of INR 147.30 minutes after the market opening on Tuesday (July 27), but later fell sharply to INR 124 on Wednesday (July 28). However, the company’s share prices recovered significantly over the week peaking at INR 142 on July 28, and finally closing at INR 133 on market closed on Friday (July 30)

On July 29, JM Financial initiated a buy coverage on Zomato shares at a target price of INR 170, which predicted a gain of 27% when compared to Friday closing price of INR 133.50. JM Financial said that “Zomato is poised to leverage the decadal growth opportunity in India’s on-demand hyperlocal delivery ecosystem. The company is a market leader in the food delivery vertical and (like some of its global peers) could explore adjacent growth opportunities”

The brokerage firm further added that industry tailwinds such as improving tech penetration and rising number of digitally native millennials and Generation Z users are likely to support Zomato’s growth ambitions. However, JM pointed out that some of the potential downside risks to target price of INR 170 include a “slower-than-expected penetration of tech-enabled transactions in India and a sharp rise in competitive intensity in the near term”.

UBS Securities also set a 12-month price target of INR 165 per share, while initiating a buy advisory at current market conditions. UBS added that since Zomato enjoys is one of the two leading players in the growing food delivery market in India, it expects Zomato to deliver more than 40% revenue CAGR making it one of the fastest-growing Internet companies in the region.

“Not only did online food delivery get a boost globally in 2020, secular factors such as smaller family sizes, lesser time and willingness to cook and increasing affluence also provide a favourable long-term growth tailwind for online food market in India,” UBS Securities added in its report on July 29.

Risks Weighing In On Zomato

However, UBS Securities added that regulatory intervention and the threat of new entrants such as Amazon could be risky for the foodtech unicorn. Regulatory interventions such as capping of delivery fees or commission charged to restaurants, mandatory social security for delivery workers, new food safety laws and strict antitrust laws could have a long-term impact on the profitability in the sector, according to UBS.

“For example, in Thailand, due to complaints that aggregators were charging as much as 30% commissions during the lockdown period, the regulators issued draft guidelines that prevent the online food delivery companies from charging unreasonable amounts or amounts in excess of what had been previously agreed,” the brokerage firms pointed out.

Apart from this, Amazon’s presence in India’s food delivery industry cannot be taken lightly given the deep pockets and years of logistics expertise the tech giant has built. Amazon entered the food delivery space in India with a limited pilot in Bengaluru city in May 2020 but it’s yet to expand its coverage into new cities. Amazon also charges a lower commission from restaurants when compared to Swiggy and Zomato. UBS Securities estimates that both Swiggy and Zomato have invested over $1 Bn-$2 Bn each to reach the current scale with a presence in over 500 cities. There is also the risk that restaurants might gravitate towards other platforms that charge lower commission rates, as seen in the case of Thrive and others.

“A new entrant (such as Amazon) will likely have to spend more than this to scale up quickly and compete against the incumbents. That said, Amazon’s size, scale and ability to fund cash burn implies one should not take Amazon lightly,” the brokerage firm added in its report.

Since Amazon largely operates on a hub and spoke logistics model for its ecommerce operations, it still has to invest heavily in hyperlocal operations which it already accomplished with products such as Amazon Pantry and Amazon Fresh. Amazon had earlier integrated both Fresh And Pantry into a single service in February 2021.

Nevertheless, the threat that Amazon poses to Zomato can be analyzed using other parallel food delivery markets in other Asian countries. Vietnam-based Shopee was a relatively late entrant in 2017 and competed against giants like Grab, but was able to expand its food delivery business outside its home market and now has operations in Indonesia, Malaysia and Thailand.
Similarly in Korea, Coupang is a new entrant in the food delivery business but has made notable progress in the past 12 months by cutting delivery times and has gained 5% market share rapidly, UBS pointed out.

A Look Into Zomato’s Revenue Streams

Zomato’s projected enterprise valuation (EV) in FY24 is at 17x of its overall sales or at 3X the GMV in the same financial year.  Some of the most successful food delivery giants such as Meituan and Delivery Hero currently trade at 3-4X EV to sales given concerns around monopoly and worker pay regulations in China and Europe. Meanwhile, DoorDash in the US currently trades at 9X EV to sales, brokerage firm UBS Securities added.

However, Zomato’s revenue growth is expected to be more than 40% YoY which is slightly higher than the 20-30% revenue growth for the global peers mentioned above, thanks to the higher growth ceiling. UBS estimates that India has over 10 Mn active users in the food delivery market who place around 50 Mn-70 Mn monthly online orders, compared to 500 Mn-550 Mn in China and 100 Mn-125 Mn in the US.

As we pointed out earlier, food delivery is unlikely to get Indian startups to these volumes, given the cultural differences between China and India. Indian food delivery and hyperlocal startups have no option but to diversify their offerings

Zomato’s co-founder Gaurav Gupta had earlier indicated that the company would be entering into grocery delivery business in an attempt to build a “new hyperlocal part of its business”. The company also reportedly launched its grocery delivery pilot in Delhi on July 29. Besides this, it has also expanded its nutrition vertical with private label nutraceuticals and health supplements. 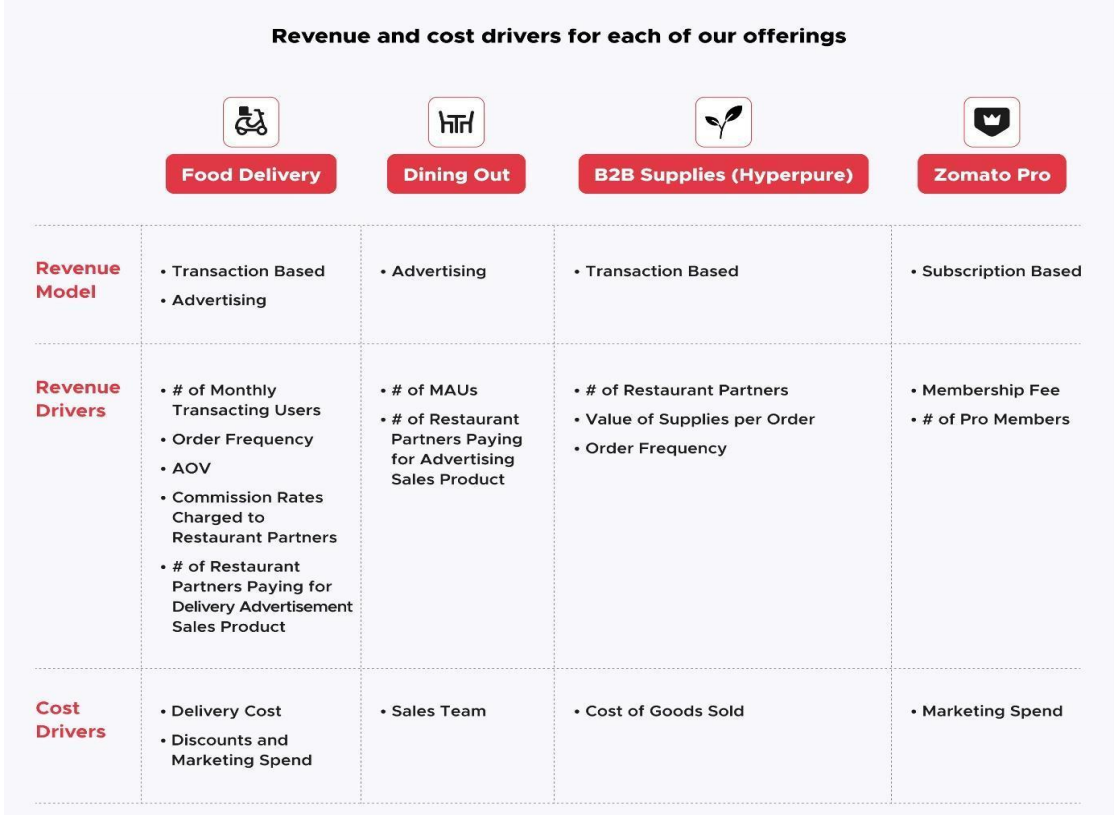 Apart from Grocery, the company’s offer document clearly indicated that there are at least three different revenue streams including Dining-out, B2B Supplies of grocery via Hyperpure, and Zomato Pro. Zomato primarily classifies revenue from three methods from these sources:

Zomato’s revenue declined almost 25% to INR 1,994 Cr in FY21, when compared to the previous financial year. The company offer document said that this was largely due to the decline in food delivery business which was affected due to covid-19 impact. Total food orders placed on Zomato’s platform in India declined by 40% YoY 23.89 Cr orders in FY21 compared to higher 40.31 Cr orders billed in FY20.

However, the future of Zomato’s sales will also depend on its adjacent business including B2B and B2C grocery delivery, and from Zomato’s push into D2C nutraceutical business, according to various analysts and investors in the hyperlocal delivery space that Inc42 spoke with.

Anup Jain, Managing Partners, Orios Venture Partners told Inc42 that Zomato has built a decade of industry knowledge especially from consumer data accumulated from food delivery and managing a restaurant’s dine-in business which will be central to its business model.

“Once you build your entire intelligence and data over an industry, and gain its trust, it is natural that you start introducing other services. This is the same strategy that global companies like Amazon and some healthtech startups have employed in India. Grocery delivery and supply of perishables is the next frontier for Zomato whether it is to consumers or restaurants,” Jain said.

Jain also pointed out that he would keep an eye out for inorganic acquisitions in D2C brands that could interest Zomato, as well as a huge underlying opportunity in the aggregation of home chefs.

Aditya Jadhav, CFA and principal (investments), SIDBI Venture Capital said that Zomato’s expansion into other businesses such as grocery and nutraceuticals is primarily focused on increasing the number of transactions on its platform, which could eventually help raise the overall sales volumes.

“They (Zomato) are trying to acquire customer transactions by making sure that its customers and restaurants depend on Zomato for all kinds of requirements whether its food or grocery or nutrition. They want to make sure that consumers and restaurants are locked into the tie ecosystem somehow. Also, I expected 40-45% of the money raised from the IPO to be used for M&A activities, and as an investor, I will be watching out for this as well,” Jadhav added.

However, during the IPO press conference held on July 8, the company co-founders never seemed to portray much of Zomaot’s non-food bets and largely spoke about the opportunity in the food delivery market alone. To an average public investor, Zomato seems like a food delivery giant. But going by its investments and acquisitions in the last few years, clearly, Zomato is eyeing to be more than just a restaurant aggregator, and maybe more of a full-stack restaurant service provider.

Aditya Kondawar, chief operating officer of wealth management firm JST Investments said that Zomato may try to justify its valuations by indulging in heft mergers and acquisitions in the near future. He estimated Zomato to have at least INR 16,000 Cr in the balance sheet now that the company is already public. However, Kondawar has his own reservations about the Zomato overall business model.

“The Zomato business itself is not viable, that is why they have to get into adjacency (grocery, dine-in, hyperpure, etc)  or other viable markets. They can justify their valuations even if one of these bets can turn EBITDA positive and starts making actual money. The management says that they are solely focused on the food biz but their actions do not seem to be. If the food business was the holy grail then they wouldn’t be getting onto software (dine-in management), grocery, and many other sectors; they would have simply focused on building the core food delivery biz organically or inorganically,” he added.

The restaurant industry is currently in a highly volatile situation due to the pandemic impact, as human resource person attrition is higher, and the margins are wafer thin. In this kind of environment, Zomato’s food delivery business cannot move forward successfully if the stakeholders themselves continue to struggle to make their ends meet. Hence the future of Zomato’s share price movement depends on factors beyond just its food delivery bets.