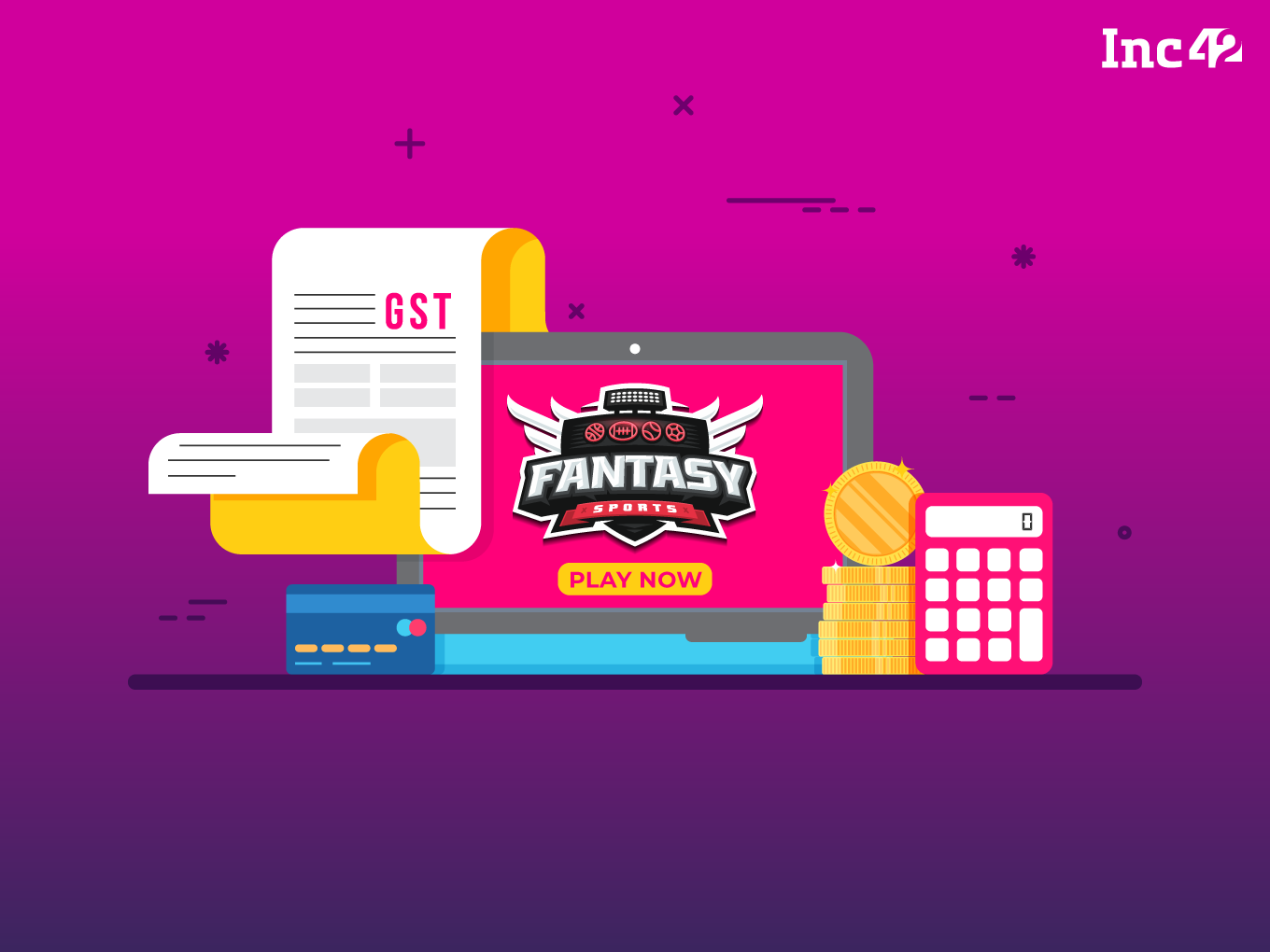 Online fantasy sports gaming startups are definitely the flavour of the season as far as India is concerned.

According to Inc42 DataLabs between 2014 and Q1 2019, the total venture capital funding in Indian gaming startups was over $337 Mn. The investment in Indian gaming startup is growing at a CAGR of 22%, with the top funded startups being Dream 11 with $100 Mn in total funding, followed by Smaaash Entertainment with $82.6 Mn in funding, and Nazara Technologies with $79 Mn.

But not all is rosy in their world as a recent tax dilemma has shaken up the industry. The debate is around the much-blamed goods and services tax (GST) and on which part of their gaming operation it should be charged on. The Indian Federation of Sports Gaming (IFSG), an industry body, representing about 26 Indian gaming companies, including Mumbai-based Dream11, Fantain, My11Circle and FanFight, among others have reached out to the Ministry of Finance and the GST committee for clarity on the issue, according to news reports.

However, only one of the startups Inc42 spoke to confirmed contacting tax authorities. Funnearn cofounder Harsha Sachdeva said that the Authority of Advanced Ruling has been contacted for further clarification on the matter. Tax experts are divided on which component of fantasy gaming business should be taxed —  the commission or the amount paid by the users to play the game.

An executive at another online gaming company, which also has fantasy sports on its platform, disputed the original report. “We haven’t reached out, nor has anyone reached out to us regarding GST. To pay GST 10 times more than they are making on a game, that is the absurd part. In any case, these media stories may be baseless,” he told Inc42 on the condition of anonymity.

We also reached out to Dream11, FanMojo, and Junglee Games, but the companies declined to comment on the development. Further, MPL’s response to our queries was awaited till the time of publication.

What Is The Issue About?

Typically, online fantasy games involve users picking a virtual team made up of a pool of real athletes. The team scores points based on the performance of the players in a real-world match.

Here, the gaming startups usually charges users an entry fee (there are free platforms as well), which is deposited as a pool in an escrow account. After the outcome of the match is confirmed and user team ranking is finalised, the gaming startups pay out a reward to the top few players. In the process, it also keeps some of the pooled amount as commission. Currently, the GST is being applied on this commission.

Dream11 cofounder Harsh Jain said in an earlier media statement, “This is the same practice followed globally in every mature GST-following country. GST for online gaming companies is charged on their Gross Gaming Revenue (commissions)”.

However, according to reports, the IT department has pointed out the variation in the tax paid by the gaming companies and it is mulling levying GST on the entire pool amount and not just on the commission earned by companies.

Here is an example assuming that gaming companies are earning only commissions as revenue, and how their net income will get affected by changes in GST rules.

As seen, the difference is huge and it can certainly become a game changer for online gaming startups.

The argument presented by gaming companies is to consider the pool of entry fees as deposits. However, the officials reportedly don’t agree with that contention.

“When we put forward our query about the deposits which the users make, another discussion about the term deposit has emerged. They [IT department] claim the amount paid by the users shall not be termed deposits because deposits are the amounts paid back on demand, which is not the same in case of online gaming. Departments and companies await the government’s clarification regarding the same,” Funnearn’s Sachdeva added.

Typically, GST is paid on total consideration. This includes any payment made or to be made, whether in money or otherwise, or any act or forbearance, whether or not voluntary, for the supply of goods or services, whether by the person or by any other person.

In the standard case, online gaming company can be considered as a supplier, while the user can be termed the receiver. So, in this case, a gaming company is supplying services to the user, hence it is liable to pay GST on the entry fees it is collecting from the user, as pointed out by government officials.

Although there is a secondary transaction as well where the gaming company is paying out the prize money to the winning users. However, in this case, the transaction involves neither the supply of goods nor the delivery of services. Hence, no GST is applicable to this transaction.

As per GST rules, to avoid double taxation i.e. GST at the time of both purchasing and selling, suppliers can claim Input Tax Credit (ITC) to set off a portion of their GST liability.

** When a business purchases a product or service from a registered dealer it pays taxes on the purchase. On selling, the business collects the tax from its customer. Any difference between the tax collected on sales and the tax paid on the purchase is the balance liability of tax which has to be paid to the government. This mechanism is called the utilisation of input tax credit.

In the case of transferring the prize money to winners, there is no question of Input Tax Credit as the transaction does not involve supply in any manner. However, the gaming company can claim ITC on other expenses as per GST rules wherein it is taking services or goods from other GST registered entities to run its business (at secondary transaction level).

Then there is the concept of Reverse Charge Mechanism (RCM), where the recipient of the goods and/or services —  in this case, the user — is liable to pay GST instead of the supplier, which is a gaming company in this instance.

RCM on supply received from unregistered entities is expected to get applicable by September 30, 2019. However, even if this comes into effect and gets applicable for gaming companies, it won’t affect the overall GST liability of the gaming company, as there is no supply happening here when the prize money is paid out, which is again a necessary condition in RCM, according to a CA Inc42 spoke to.

The fact that there’s no way to set off the GST liability will certainly impact the company profitability, as depicted earlier.

According to the many chartered accountants and GST experts Inc42 spoke to, online gaming companies can litigate against the tax department for bringing the issue at this late a stage.

“Most of the companies are operating in this space from the 2010-2011 era, and have taken millions of dollars from investors on the basis of their growth with respect to the existing business model. Even when, GST was not there, they were paying service tax and assessments have been done. There is a chance where the court can approve of this model and the government can make a new amendment in the GST Act,” one GST expert said on the condition of anonymity.

In case the government remains firm on its decision, gaming companies will have to again work on their profit strategy and can take resort to options such as increasing the entry fees, thereby passing the additional GST liability to the consumer or reducing the prize money while keeping the entry fees the same, or the company can bear the GST liability on its own and try improving its user base and revenue channels to balance out the reduced profitability

Whichever route they take, online fantasy sports startups will certainly lose some of the shine. In the worst case scenario, the recovery of the GST on a historical basis will kill several small gaming companies and only those with the large pockets will be able to survive the transition.

As Sachdeva said, “It is obvious the “fact pattern” comes into consideration here. But when viewed monetarily, the companies will not be able to carry on their services effectively.

“If the rules change, the companies will have to pay a lot more GST, and yes, the difference will be a huge amount, whereas the revenue earned will remain constant, which would force a few companies into bankruptcy and eventually shut down.”