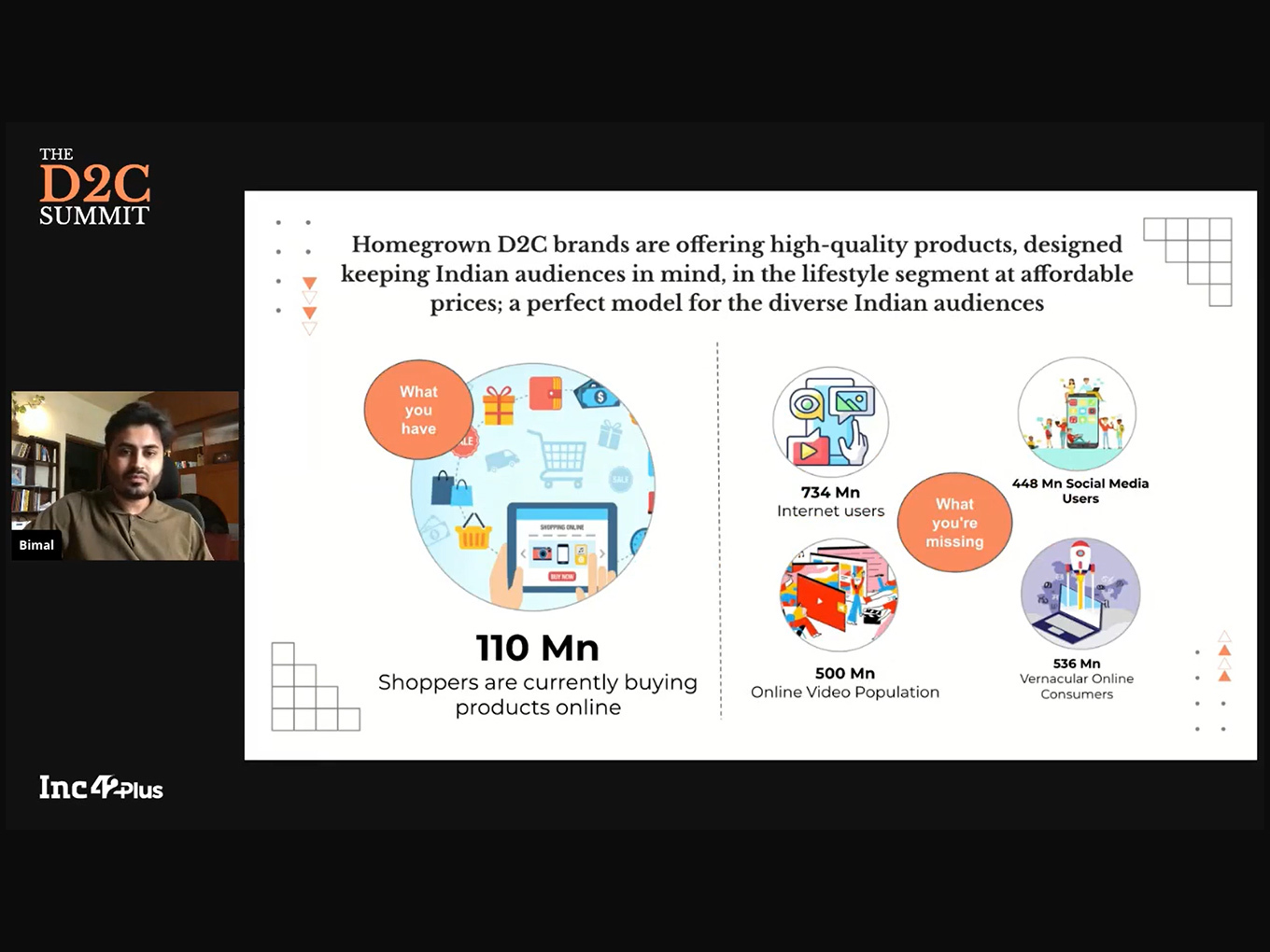 With more than 700 Mn internet users and just 100 Mn online shoppers in India, the emerging D2C brands need to focus on the huge and untapped consumer base to scale fast

Explaining the impact of social commerce in brand building, Rebba underlined the need to embrace the inclusivity and diversity of India

Lately, the D2C (direct-to-consumer) wave has emerged as a sustainable trend for bona fide reasons. Ever since the Covid-19 pandemic hit the world, India was forced to undergo prolonged lockdowns, supply chains were disrupted (if not dismantled) and brick-and-mortar retail came to a shuddering halt for months together. And online shopping grew multifold across ecommerce marketplaces and dedicated D2C brand platforms as safety and convenience topped the priority list of consumers.

A grim picture altogether but for the rise of the latest disruptor, taking the country by storm.

According to Inc42’s recent report titled Decoding India’s $100 Bn+ D2C Market Opportunity, more than 100 Mn online shoppers in India transacted across ecommerce marketplaces and D2C brand platforms in FY20. But here is the catch. Going by latest data, the country is home to more than 700 Mn internet users. It means nearly 85% of internet users are still not in the digital-first D2C sales funnel.

But the scenario may change if the super digitalisation triggered by the Covid-19 crisis does not lose its tempo and millions of digital-savvy Indians continue to adopt online commerce. Experts also think that the current digital wave is not likely to reverse soon. Hence, there will be a huge opportunity for the D2C brands keen to tap into this large demographic and cater to India’s next billion.

But Bimal Kartheek Rebba, cofounder and COO of Bengaluru-based social commerce platform Trell, was aware of the possible bottlenecks that could hinder the growth of the D2C brands. Speaking at a masterclass at The D2C Summit 2021, hosted by Inc42 on July 17 and 18, he explained what would prevent an Indian brand from tapping into Tier 2 cities and beyond, and how it could leverage the opportunity to scale faster.

“There exists a chasm for all D2C brands, but especially the new entrants. This chasm appears when a brand reaches a monthly recurring revenue of INR 35-50 Lakh. It is important to scale and escape this chasm, or a D2C brand may risk stagnating and shutting down. I want to tell you how a brand can cross this chasm and build at scale,” said Rebba.

Building A Funnel For A Wider Consumer Base

Understanding why this sizeable internet audience from Tier 2 locations and beyond is left out of the D2C brands’ funnel requires a close look at the behavioural pattern of these businesses. A key reason why users from these areas do not shop online is the lack of trust in brands. In their report titled The Future Of Commerce In India, both Bain & Company and Sequoia Capital further underlined the lack of trust as the biggest inhibitor of online commerce.

According to Rebba, the solution lies in making more relatable content for these potential customers from widely diverse regional and vernacular backgrounds. But before that exercise, businesses need to understand the diverse nature of their audience. 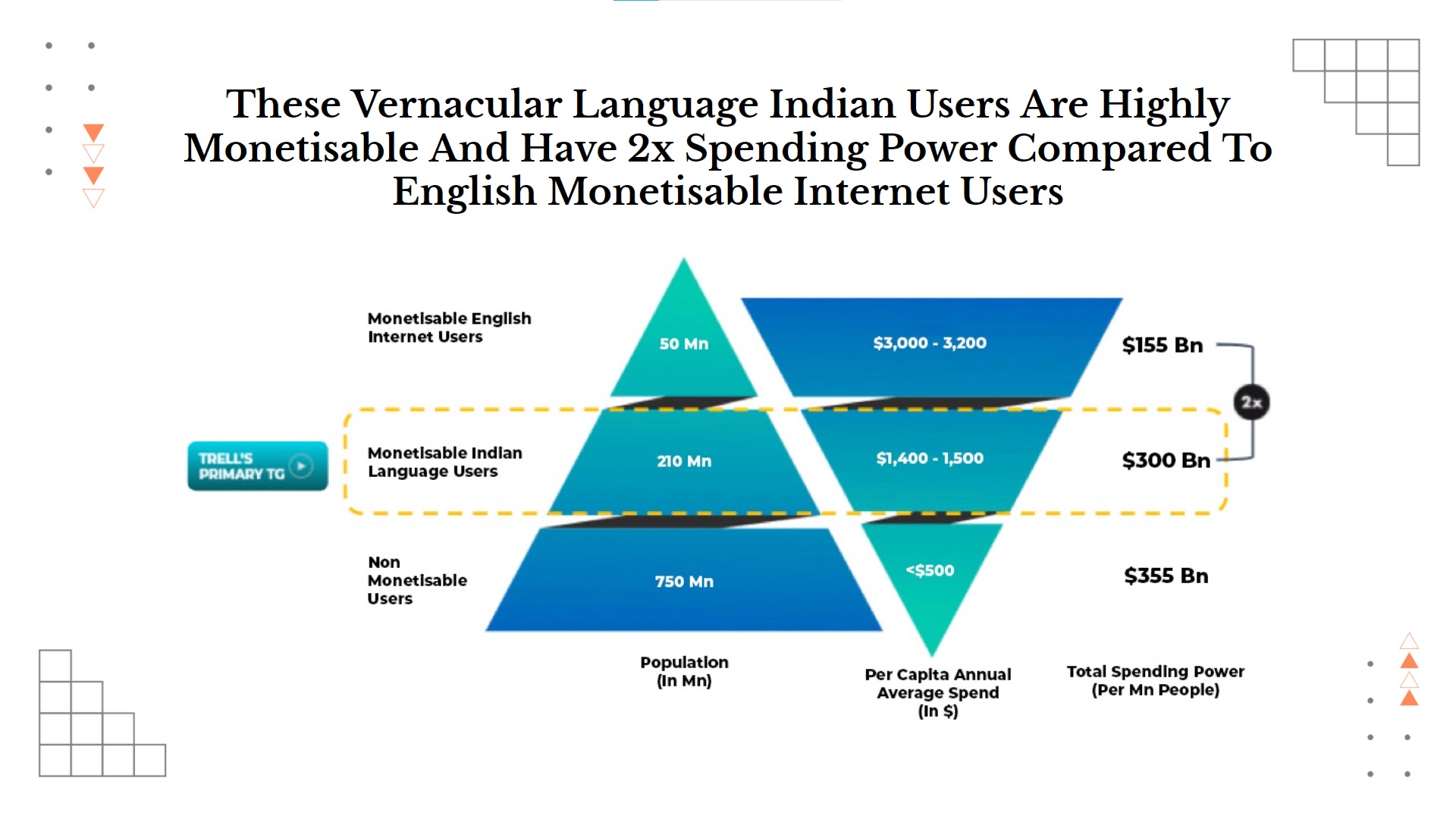 Referring to the monetisable Indian language users, Rebba pointed out that this group’s per capita spending power is less than the first bucket, but as the demographic it serves is double the size, it still has double the cumulative spending power of English speaking internet users. That is the kind of opportunity vernacular content can open for D2C businesses looking to scale up.

Interestingly, most D2C brands communicate with consumers in a single language and keep track of the entire consumer base at the same time. This creates a twofold problem. First, the existing target audience of 100 Mn shoppers gets saturated too fast as several brands tap into this space. Second, brands fail to spread out consumer engagement across multiple languages and cannot focus on different regions separately, thus missing out on a large potential customer base.

If D2C businesses do not segment their prospects based on region and language, this gap in communication and engagement will be difficult to bridge. After all, 90% of Indian internet users prefer to consume content in their local language, said a Google report titled Year in Search 2020: India’s Determined Progress. And that habit is not likely to change just because their online sellers speak another language.

So, there is a massive opportunity out there for D2C brands, but how can one grab their attention, build trust and eventually sell to them? Rebba said that reaching this demographic via social media and short video platforms would require social and video commerce in vernacular content.

“If you look at the vernacular landscape in India, there is an increase in adoption. If a brand can implement a multilingual strategy, it can win the market,” said Rebba. 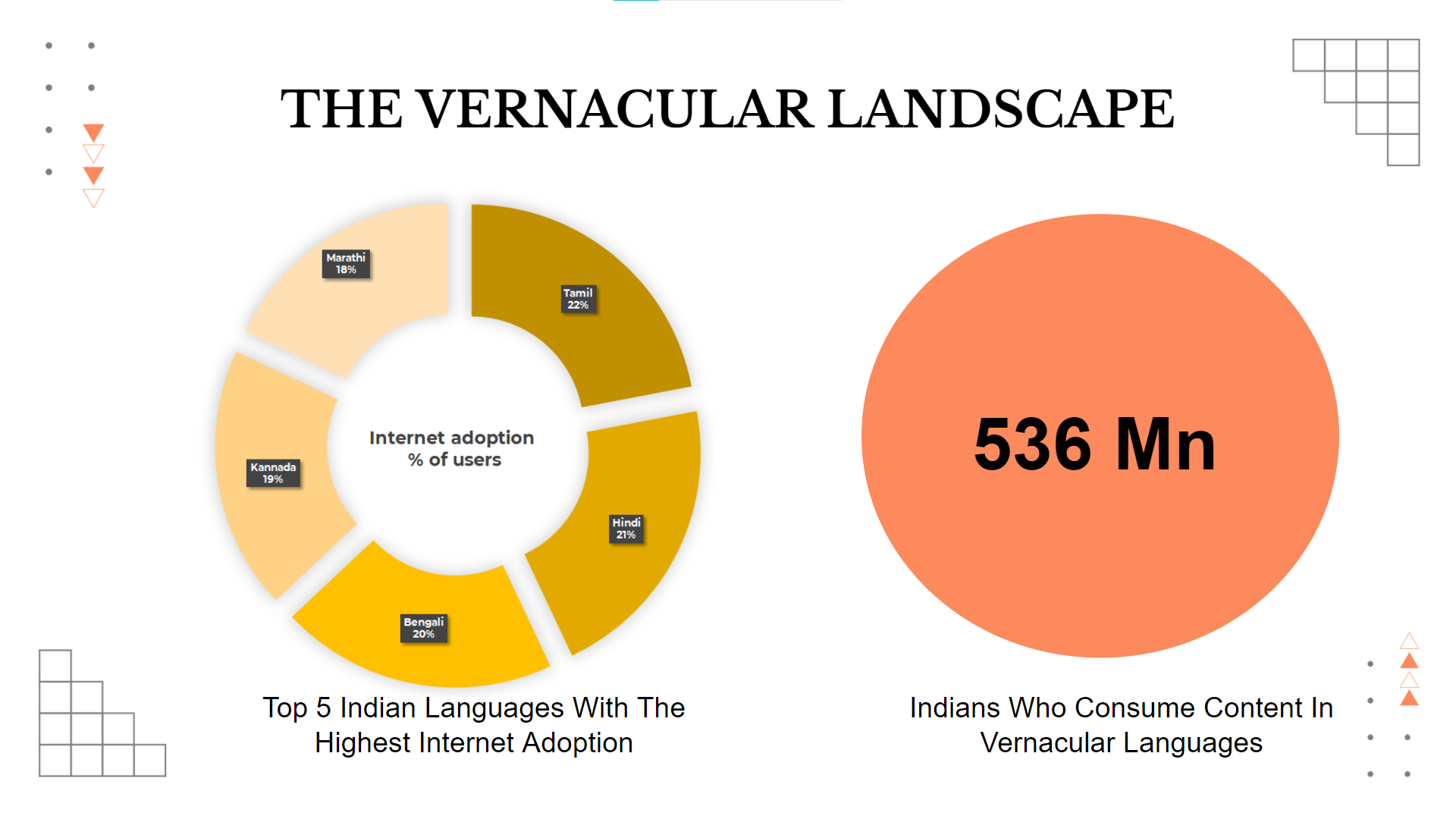 For instance, Tamil has a 42% internet adoption rate, the highest in India followed by Hindi and Kannada. So, for a brand looking to expand in the Tamil market, it makes more sense to promote all its products in the local language instead of English to maximise the return on investment.

The video landscape offers an equally large opportunity as 325 Mn Indians watch online videos regularly, according to a 2019 report by KPMG on India’s Digital Future. As a large chunk of the Indian population spends its online time watching video content, it has become an important channel for D2C brands to target untapped consumers.

Towards the end of his masterclass, Rebba talked about the potential of social commerce platforms that combine both vernacular and video content to reach Indian language internet users across the country. While explaining the model, he discussed how four important levers enable D2C brands to stay connected with their target audience. Here is a quick snapshot to stay informed.

First, social commerce simplifies the complex shopping experience for users. In traditional digital advertising, the user finds an ad, visits multiple pages to enter the website and finally makes a purchase by transacting via the payment gateway. However, social commerce fluidly brings all these components onto a single page so that a consumer never has to leave the original page.

Second, it allows brands to have a one-on-one conversation with end consumers and personalise the content for specific regions. This increases the chance of bringing them into the consideration funnel from the initial awareness funnel. The content made by micro-influencers also helps brands build trust among consumers.

Third, it takes the brands away from traditional modes of marketing where legacy brands and other competitors already exist. Instead, it provides them with better discoverability and brand-building opportunities through largely untapped channels.

And finally, it allows brands to build relevant cataloguing experience. For example, a Marathi consumer who watched Marathi language content to discover a brand can be redirected to a relevant product catalogue for Marathi regional consumers.

Expanding upon the role of influencers in building trust for a brand, Rebba said that in certain markets such as fashion, home decor, beauty and personal care, a buyer’s decision would be mainly peer-influenced. The D2C brands operating in these segments can build product stickiness via the influencer route.

“A brand has to focus on the inclusivity and diversity of languages to create solutions for emerging India. Understanding the cultural nuances of different regions and using an immersive marketing strategy are the most efficient ways to build strong brand loyalty,” concluded Rebba.