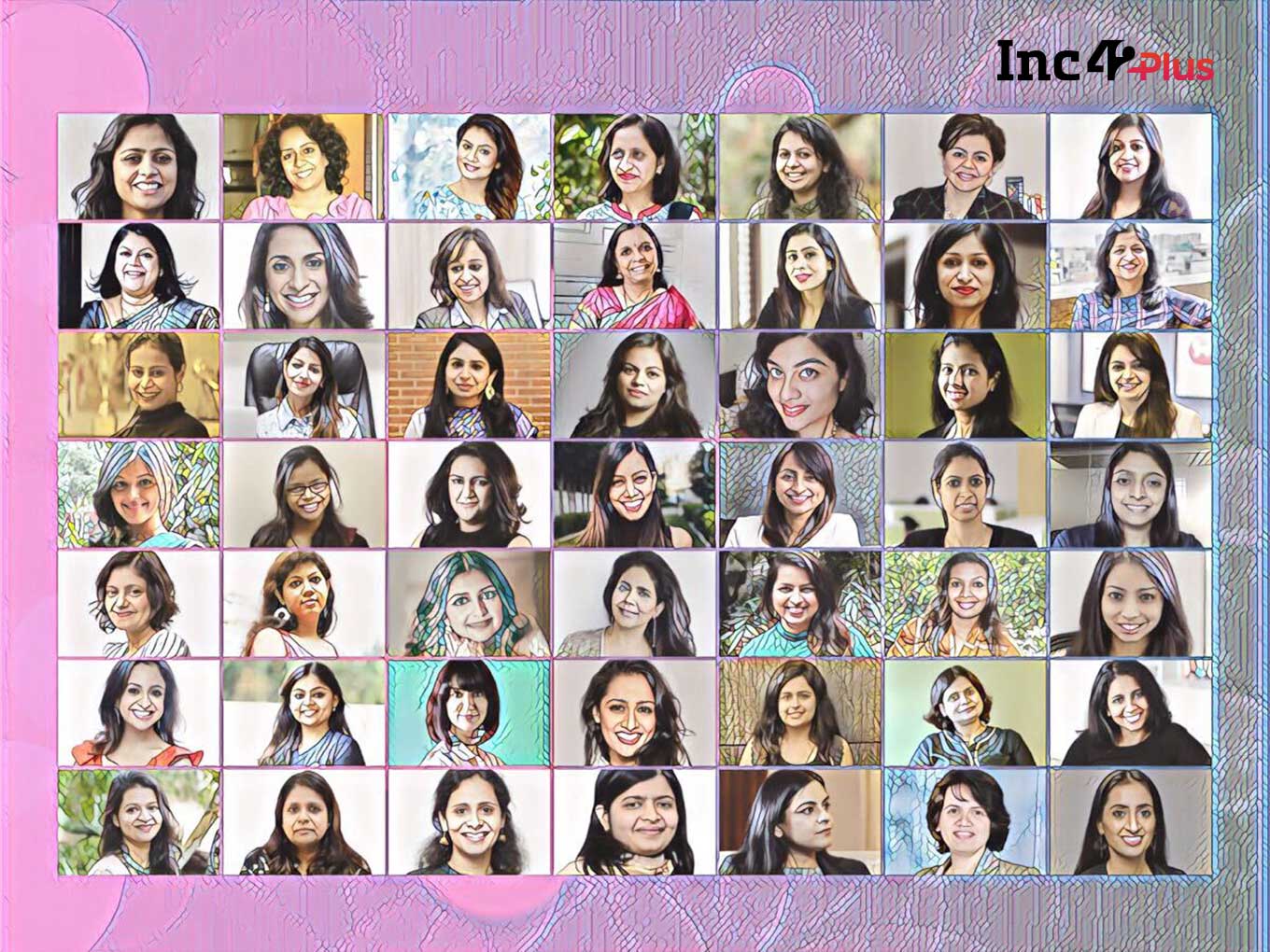 The world’s third-largest startup ecosystem has very few women leaders, but the times, they are a-changin

Just like every week, this week, too, we want The Outline to deep dive into a topic that impacts the startup ecosystem. And nothing could be more relevant than celebrating the incredible women founders and entrepreneurs across the Indian startup ecosystem on the eve of International Women’s Day. Of course, one day is not enough to celebrate women’s power, but we do not want to let go of any opportunity to bring them into the limelight and focus on their valuable work.

As part of our research, we made a Google search for ‘women-led startups in India’, and several articles came up featuring long lists of women founders. We were fascinated by their success stories and how they broke numerous glass ceilings before tasting success. But here is the catch. Before long, we did realise that almost every article mentioned the same bunch of women.

Next, we googled ‘men-led startups in India’ but got zero results! Surprised? You should not be as no one wants to search for what is already known, a universal norm, you may say. But that is exactly the point.

Gender imbalance does exist in the world’s third-largest startup ecosystem, and having men in leadership roles has become an everyday reality that we have learnt to accept without raising an eyebrow. Female representation in the country’s startups, built on new-age organisational theories and a progressive outlook, is still minuscule. According to the Indian government’s Sixth Economic Census, women account for around 14% of total entrepreneurship, or 8.05 Mn out of 58.5 Mn entrepreneurs.

Although we need to bring our women leaders to the forefront, which will inspire more women to break down silos at work, the current number only proves that the road ahead will be long and difficult. India ranks a dismal 52 out of 57 countries on the Index of Women Entrepreneurs 2019. And female representation across India’s 45 unicorns and 50 soonicorns is also meagre. 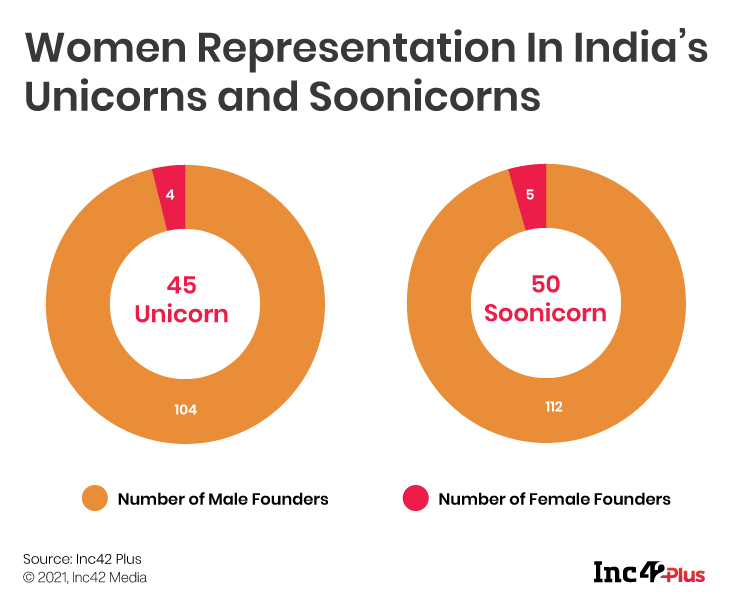 The Glass Ceiling And Gender-Biased Boards

As we are fully aware, the bias against half the human population exists everywhere. Take, for instance, the formula to determine standard office temperature developed in the 1960s. It was decided based on the metabolic resting rate of an average man. Or look at today’s one-size-fits-all PPE kits designed for male physicians and healthcare workers. This again stems from the skewed gender ratio among doctors the world over. As of 2015, women doctors accounted for 34.1% and 39.4% of the medical professionals in the US and Australia, respectively.

Indian startups, which have ushered in a new era for entrepreneurs and enabled a technology revolution of sorts, are not immune to this patriarchal bias. In fact, access to capital is one of the most crucial areas that underlines such bias. 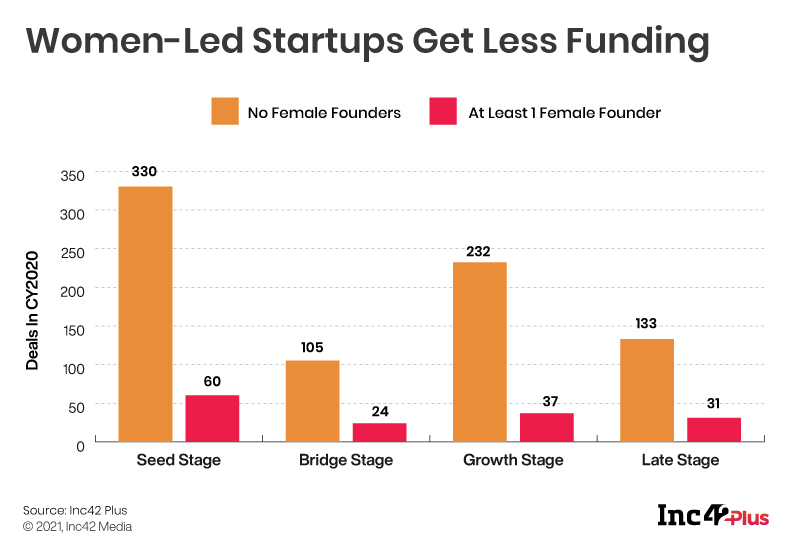 Stories of women founders questioned on their knowledge of technology and their capability of running a company and a household simultaneously are not unheard of. “An angel investor, to whom I pitched once, turned his back to me and started talking to my CTO, who was a man. He (the investor) probably thought I would not be able to explain the technology well, and it was seemingly obvious from his expression,” says Sharmin Ali, CEO and founder of Instoried, a Bengaluru-based content emotional analysis startup.

Supriya Paul, cofounder and CEO of Josh Talks, is not too sure about gender bias, but she has been taken less seriously. “Especially during our early days, when we had a lot of sponsor meetings, there were instances when senior leaders would direct their questions at my cofounder instead of asking me even if I was the decision-maker there. Things like that play upon your self-esteem, but you have to condition your mind to counteract and keep moving forward,” she says.

The under-representation of women is also evident among investment decision-makers at private equity and venture capital firms. Will it change the funding game for women entrepreneurs if more women at VC firms make investment decisions?

For sure, says Nupur Garg, a PE investor and founder of WinPE, a not-for-profit platform that works on creating gender balance in the investment ecosystem. “Research suggests that gender imbalance in fund portfolios is correlated to the gender imbalance in investor teams. Data shows that female deal partners invested in twice as many female-led businesses compared to male deal partners, and it could be so because networks play a crucial role in sourcing investment opportunities,” she says. 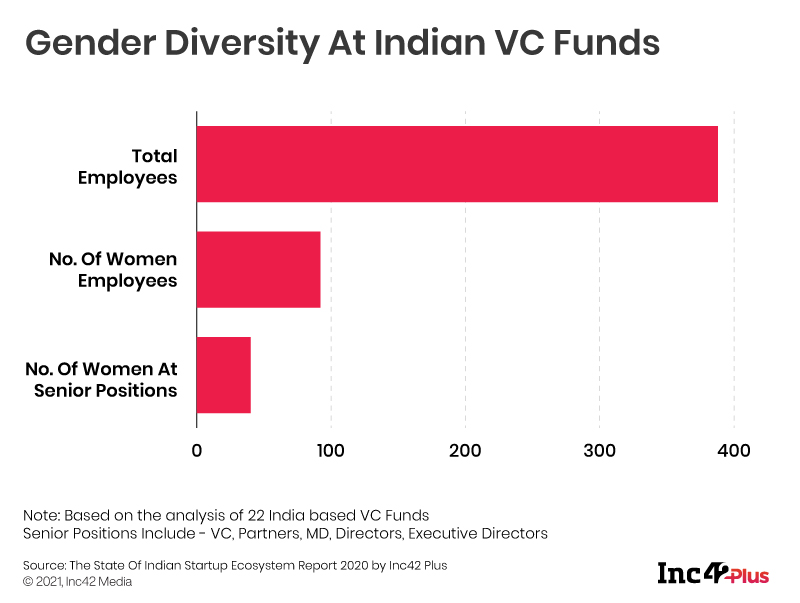 Women VCs believe that gender balance across the investing community can be a powerful trigger for driving diversity in the ecosystem. “Without women VCs, women entrepreneurs will always face a problem due to inherent bias. Women VCs will give an unbiased chance to women entrepreneurs to succeed,” says Rema Subramanian, cofounder and managing partner at Ankur Capital.

Disparity and discrimination also exist in other areas. Indian startups, frequently lauded for bringing artificial intelligence, machine learning and other cutting-edge technologies to the masses residing beyond the metros, have fewer women in tech roles. According to an Oxfam report, 2019, only 26% of women work in tech roles in India.

This disparity starts right at the school level and continues through engineering colleges and premium institutions like the IITs and IIMs. More than 30% of girls drop out of school when they are in class IX, and 57% leave when they are in class XI. But in urban India, girl students often outshine the boys in school exams. The gender ratio remains skewed in engineering colleges and overall STEM education due to the same social conditioning that upholds an age-old mindset – core engineering jobs are meant for men. The scenario in India’s B-schools is no better. In 2019, only 19% of applicants and enrollees (combined number) were women.

Sakshi Tulsian, cofounder of POSist, a cloud-based restaurant management platform in Delhi-NCR, feels society does not prepare a woman for likely failures and does not give her a second chance when it happens. “At schools and colleges, girls use their sincerity to win but somewhere, systematically, lose their preparedness for failure. But when it comes to startups, that becomes a key requirement. This is also reinforced in personal lives as parents do not want their daughters to look less ideal. Hence, women end up with more predictable careers (and better chances of success) than path-breaking ones,” she says.

This is not unique to India. Globally too, women have been fighting many stereotypes. In fact, India has 32% of women in engineering education compared to 20% in the US and 28% in the EU. According to a World Economic Forum report, cloud computing roles have 12% of women representation globally, while in engineering and data and AI, the numbers are 15% and 26%, respectively.

The gender gap in tech roles is also reflected in popular tech products. Most egregiously, voice assistants worldwide are mostly female, but they are primarily trained on male voices to recognise them easily.

Whether we like it or not, the ‘Bro-code’ still rules the high-tech Silicon Valley and the impact can be felt, says Manisha Raisinghan, cofounder and CTO of LogiNext, a California-based logistics automation platform with an office in Mumbai. “From the time factories came in and globalisation began, one would typically see a man in a suit calling the shots. This has percolated over the decades. For this to change, women have to rise to the occasion, speak up and deliver. The last few years have seen a rise in women’s momentum in tech. But this needs to percolate much deeper for things to really change,” she says while narrating the bias she always faces.

“Whenever my cofounder, Dhruvil Sanghvi (CEO of LogiNext), and I enter a large client meeting or a board room, any tech-related question goes to Dhruvil. And when he points towards me, all eyebrows go up!”

Women are still primary caregivers for children and the elderly at home, and in the absence of a support system, they often quit their jobs. Therefore, women founders with babies often struggle to fulfil multiple roles and responsibilities, each of them equally challenging and crucial. “I was aware that my journey to build Mamaearth (a Gurugram-based baby and mother care products startup) would not be smooth, and I was prepared for the hurdles that would come my way. But being a mother of a two-year-old and nurturing yet another baby (my company) was fairly challenging,” says Ghazal Alagh, CIO and cofounder of Mamaearth.

So, at times, she had her child in one hand and the phone in the other. “Staying away from the baby and the family was tough but rewarding as well. It feels great to see where we have arrived today,” she says.

Moving Beyond Lip Service, Together

As we have said before, the road to gender equality at work will be strewn with difficulties. But the times they are a-changin. From cosmetic brands to fintech companies, we have women entrepreneurs across sectors, not to forget the micro-entrepreneurs who are mostly rural and middle-class women. What’s more, women leaders and founders often inspire other women to take up leadership roles within an organisation. For instance, 60% of the tech leadership roles at LogiNext have women professionals.

Then there are the likes of SHEROES (Delhi-NCR), Leap.Club (Delhi-NCR), JobsForHer (Bengaluru) and Basis (Bengaluru), startups that are taking up causes of women or building women’s communities. Take, for instance, Leap.Club, a paid and private professional network for women. “Our members join us for two major reasons, which are building a high-quality professional network and focussing on learning and development,” says Ragini Das, cofounder of Leap.Club. The startup currently has 1,000+ members and 80,00 women on its waiting list.

Women are also choosing to start up with other women cofounders to encourage and support each other. The Mumum Co (Mumbai), FabAlley (Delhi-NCR), Basis and a few others have only women cofounders. “There is something very refreshing about being open with colleagues, knowing that they get you and are non-judgemental. I have not worked with a male cofounder, but I am assuming that the dynamics would have been very different,” says Hena Mehta, cofounder of Basis, a women-oriented fintech startup.

Furthermore, the pandemic-induced work-from-home culture is expected to encourage women to continue focussing on their careers and manage entrepreneurship better.

With things looking up, we hope that one day, a Google search of women-led startups will also produce zero results. It will be a commonplace thing that will require no search, and every day will be Women’s Day!

But for now, let us salute the women who are focussed on their goals and chasing a million dreams despite a million obstacles.

Going ahead, along with women founders, we want to bring into the limelight every woman who has contributed to the Indian startup ecosystem. A part of that endeavour is The Makers Summit 2021 by Inc42 Plus (to be held on March 10-12) that brings together 10,000+ product founders, leaders and makers and is on the lookout for the coolest women, making the most relevant products for Bharat.

They may be few, but they are awe-inspiring and will surely motivate many girls and women to walk the path still less travelled.

Help us put the spotlight on them by nominating the most innovative women across the product ecosystem with whom you have worked, those who have inspired you, the product leaders who have taught you the tricks of the trade!

Let all of us do our bit to support and promote women in the tech industry so that when we write about them next year, the story will be that of progress and not just the need for it.