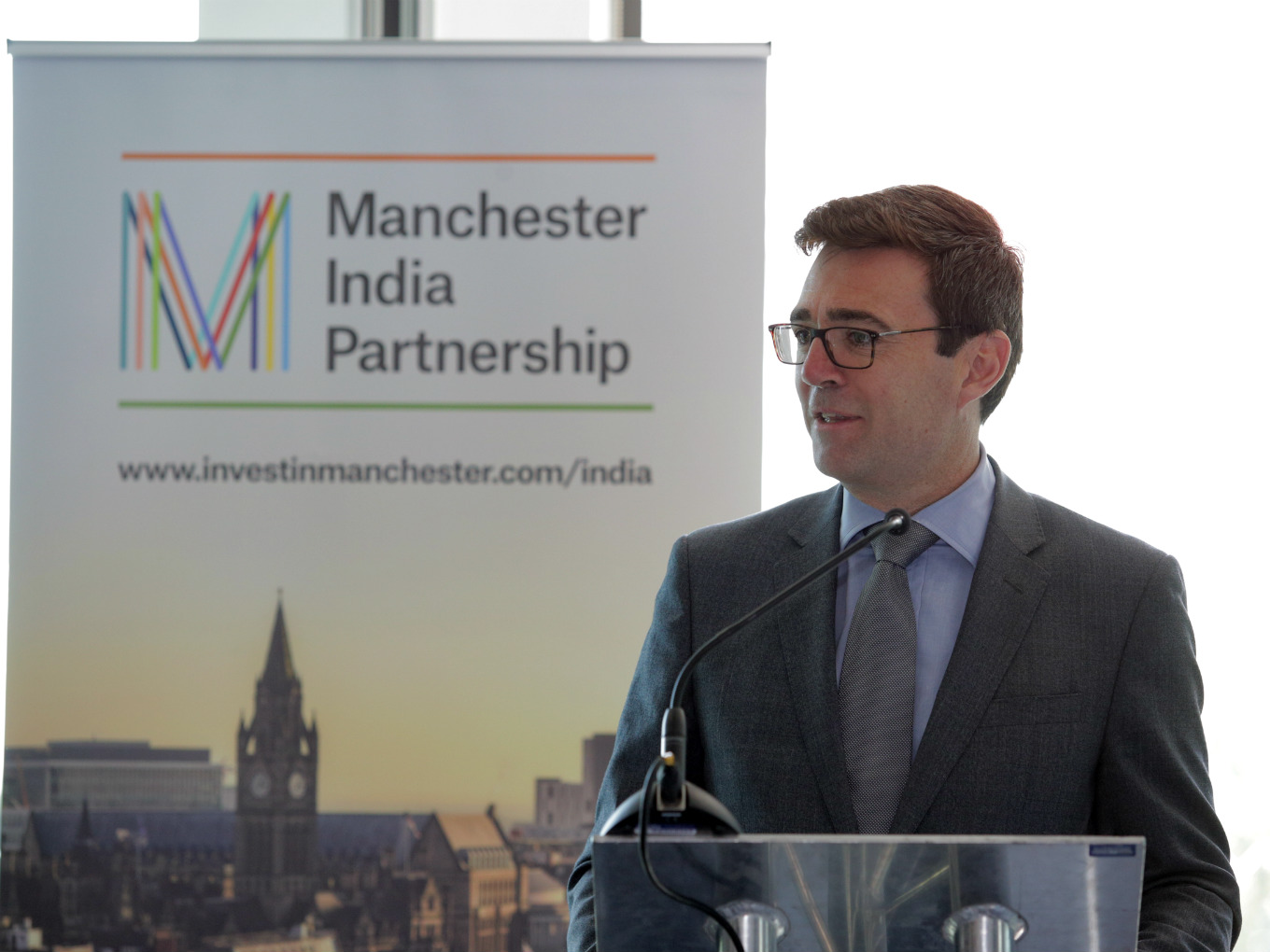 Direct flights from Bengaluru to Manchester in the next year, assured MIDAS CEO

Since the Brexit announcement, the UK, which has consistently been the fifth largest economy in the world, has been promoting itself as a standalone condensed market in contrast to the European Union. Having created a slew of hubs, other than London, such as Manchester, Birmingham and Leeds, the country has been looking for multilevel, multilayered deep collaboration with Indian counterparts.

With the deadline set for October 31, a hard Brexit looms, creating chaos and confusion among businessmen including Indian startups who cater to the UK and EU market. Will there be a double taxation post Brexit? What’s going to happen at Northern Ireland’s border? Lack of direct flights between Bengaluru and Manchester. For startups, the questions are many and to respond to these queries, a 30-member delegation led by Mayor of Greater Manchester, Andy Burnham recently visited Mumbai, Bengaluru, and Delhi and signed a host of MoUs with various Indian companies and institutions.

The 10 metropolitan boroughs of Greater Manchester — Bolton, Bury, Manchester, Oldham, Rochdale, Salford, Stockport, Tameside, Trafford, and Wigan — represent the largest city region economy outside London, with a gross value added (GVA) of $84 Bn. In the decade up to 2012, Greater Manchester’s economy grew by 42%. It has also been one of the major UK city-regions driving job growth (84% between 2002-2015), at a rate twice that of the north. Greater Manchester is recognised as the UK’s fastest growing and most economically productive city region and India has the fastest growing economy in the world, making them the perfect bilateral collaborators.

During his Bengaluru visit, Inc42 spoke to Burnham, Manchester’s inward investment agency MIDAS CEO Tim Newns, and Jon Corner, CEO of coworking space The Landing and Chief digital officer at City of Salford to understand the Greater Manchester’s ecosystem for Indian entrepreneurs and startups in the global perspective.

The delegates believe that the Indian government’s grand initiatives, such as Digital India, Make in India, Smart Cities and Clean Energy India, align with Greater Manchester’s research and innovation strengths in technology, advanced manufacturing and energy – creating huge opportunities for partnership at various levels including entrepreneurship and for startups.

Manchester India Partnership (MIP) was established in February last year to build and strengthen trade, investment, cultural, and educational ties between the two regions. And, according to Burnham, the large delegation visit to India is a testimony to their seriousness about building the partnership.

“There have already been some early wins. We were part of the Deloitte Fast 50 scheme where a number of startups were given the opportunity to have free space in greater Manchester. And some such as 42gears have successfully expanded their base in Manchester. So there are some tangible results.”

Giving an account of the MIDAS initiative, Newns said that so far 20 startups have visited Manchester and some are in the process of setting up their base in the city.

Backing this up, Burnham added “We’ve got a whole series of work underway, particularly around skills. While we have, as a combined authority, have invested heavily in digital skills, infrastructure and been continuing to build that ecosystem, I would say it’s superior to what other cities have to offer.”

In the UK, while company registration is quick and usually done within 48 hours, the KYC process for Indian startups to open a bank account has been rather cumbersome. To this, Newns said that MIDAS has already addressed the issue to some extent. The UK has prepared a set of service packages that are offered to startups looking to set up in the UK. This includes legal advice, banking advice and so on. “We have also partnered with ICICI Bank, to address the banking-related issue of Indian startups,” said Newns.

Despite Manchester having presented itself as an investment destination, there remain connectivity issues with no direct flights between Bengaluru and Manchester. However, Burnham said they are actively talking to the Indian counterparts and, within the next 12 months, there will be a direct flight.

“It’s just a matter of when. I think, as that market develops, I’m certain that we will have direct flights in the next 12 months,” said Burnham.

Brexit: The Never-Ending Deal Despite The Deadline

Since its announcement on March 29, 2016, Brexit negotiation models have been rejected by the UK parliament thrice and as the deadline nears, there are a plethora of issues that look too vague and hence bringing uncertainty, instability to the UK’s economy to an extent, from border to trade issues.

Accepting the harsh reality of Brexit, Burnham said, “If UK-based startups seek to export to Europe, then that would be a problem. But I think on a more social, political level, with hard Brexit, I think we’d start to endanger the future of the UK as an entity because it would cause real problems in Ireland. But, I think it would also create extra tension in Scotland and you know, it’s something that shouldn’t be allowed to happen in my view.”

However, Burnham is still hopeful of a soft Brexit given that it would ease the burden on a lot of businesses. He added that a majority of people in the UK parliament would vote for a deal with the European Union.

“There is a deal there, that could now be done. And, I think this applies for the European side as well, you know, rather than them just pointing the finger.”

On the Northern Ireland border issues, Burnham stated that since the Good Friday Agreement between Ireland and the UK government, there has been a consensus on not wanting a hard border between Northern [Ireland] and Ireland.

“The issue is how do you maintain that that free flow whilst also respecting that the European Union, and the UK will then be separate entities in terms of customs and immigration etc. So this is the challenge that everyone’s been wrestling with for the last few months. I think it should be possible to use new technology to create a light border,” said Burnham.

With the University of Manchester alone having created 25 Nobel laureates, the city is no stranger to innovation. The university has been credited for developing some landmark technologies such as graphene and random access memory (RAM) which powers all modern hardware. Newns asserted that there is an opportunity to commercialise graphene in quite a serious way where it could be used for mobile hardware technology. With licensing agreement, Indian startups can definitely explore some of these innovations that are happening at various universities across Greater Manchester.

As in the case of the Indian startup ecosystem, Manchester’s boom is led by ecommerce. “We have five unicorns in Manchester, which are ecommerce companies. And, besides the presence of big firms Raytheon, Northrop Grumman, IBM, and BA systems, the other big movement that we have witnessed recently is the UK GCHQ (Government Communication Headquarters) has just been set up in Manchester which will tremendously help the cybersecurity sector in the city.”

Is The UK Going To Ban Crypto?

Like India, the UK government has not been receptive towards cryptocurrencies. According to the Financial Times, UK market regulators are planning to ban derivatives on cryptocurrencies for retail investors, considering that trading them is “akin to gambling”. UK’s Financial Conduct Authority, after its 18-month study, had recently announced plans to prohibit the sale or marketing of derivatives linked to cryptocurrencies such as Bitcoin and Ethereum from early next year.

Newns, however, said that cryptocurrency is still very much being considered by the country’s financial regulatory authority. The authority is still agnostic in terms of understanding how the consumer is potentially using the currency, he added. “There’s not a ban. But I think the regulators are looking at it very quickly to understand because it’s not regulated. That’s the point. And therefore, you know, traditional sort of financial products are being promoted, as they feel that the consumer is at risk at the moment with cryptocurrency.”

Salford CDO Corner spoke on the infrastructure benefits that Manchester offers to startups at far cheaper costs than that of London or Hong Kong. Corner, who is also the CEO of coworking space The Landing, said, “The Landing houses over a hundred startups; however, the interesting thing is the lab spaces inside. It offers facilities where you can actually physically fabricate and make your products. We’ve got a VR-AR lab for loT, 5G innovation. And, we’ve got a UX lab as well as a maker space.”

Greater Manchester’s real strength is not only in ecommerce, cybersecurity and digital infrastructure but also in healthtech and fintech.

Newns added that there could be an increased collaboration in sportstech too, as Manchester is home to two of the world’s biggest football clubs. Many other sports such as cycling and cricket too are followed closely.

And, there is greater scope for Indian startups as well as corporates to engage with the city stakeholders at various levels, said Newns.