As the number of Covid-19 cases surge, startups such as AgVa and Biodesign are looking to meet the high ventilator demand

Besides low-cost ventilators, startups such as Ethereal Machine are also developing tech to optimise existing solutions

Covid-19 has highlighted the cracks in Indian healthcare, but will the government rope in more private players to help out?

While most Indians debated the pros and cons of clapping, banging utensils and lighting lamps, doctors took to social media to rather request for personal protective equipment (PPEs) to be able to treat and save Covid-19 patients safely. Day in and out, gruesome pictures of doctors and nurses covered in bruises due to PPEs and masks etc surface online while there are other videos of doctors and nurses breaking down due to challenges of dealing with lack of protective gear and horrifying reality.

On the other end, the rising number of patients has also highlighted the need to improve the capacity of ventilators and respiratory aids in Indian hospitals. Seeing the urgent need, Indian startups across sectors have also joined in the race to develop low-cost ventilators to save the COVID-19 patients. Along with them, Industry experts like Mahindra, Maruti Suzuki and more have also been helping the tech startups scale their manufacturing operations. 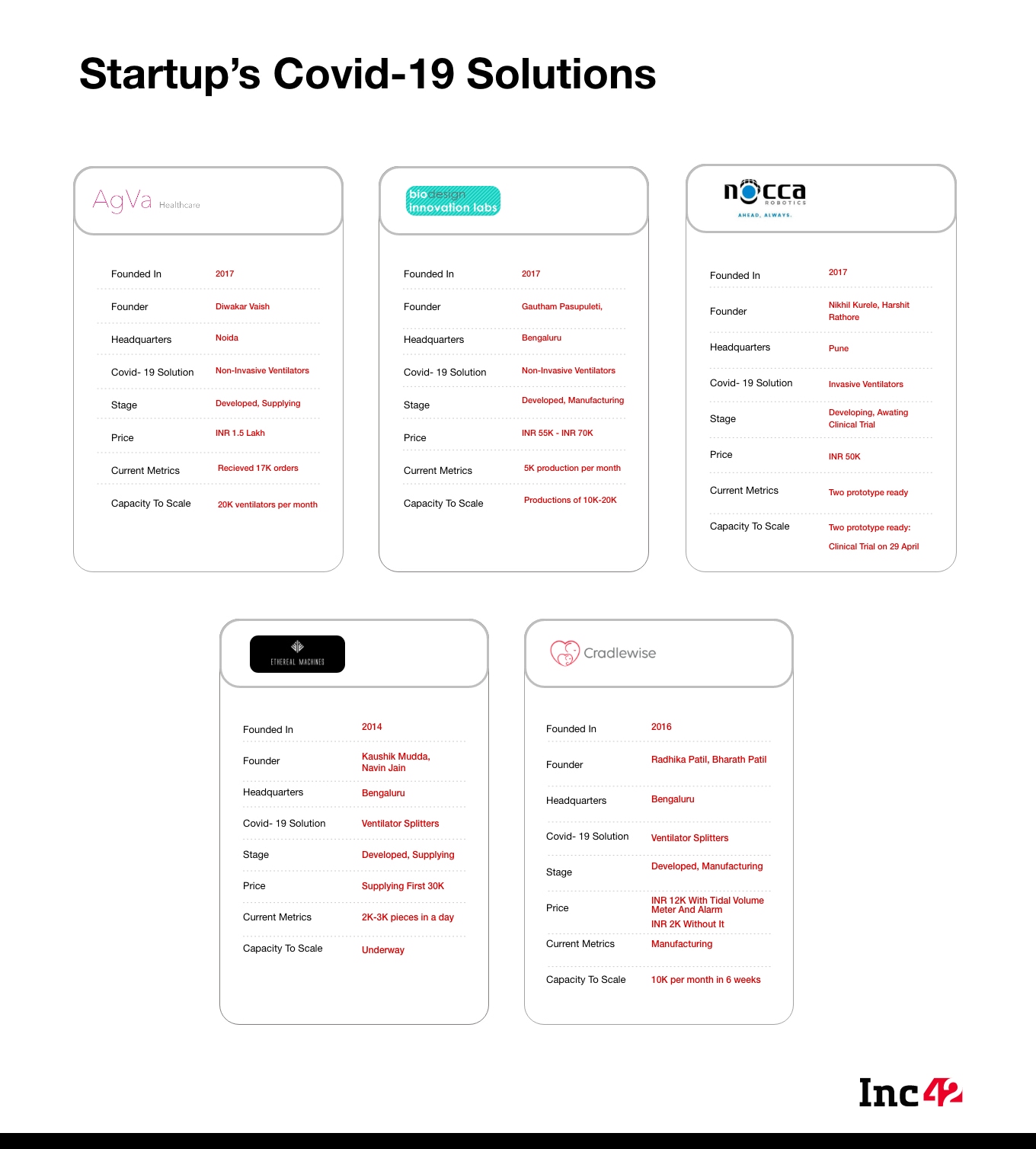 Noida-based AgVa Healthcare has developed a toaster-sized low-cost ventilator, weighing only 3.5 Kg, which can be easily deployed in smaller medical centres and temporary Covid-19 hospitals. The ventilators run on room-air without the need of compressed medical air, and can be used to help less-critical patients, and help them on the path to recovery.

The company has received orders for over 17K ventilators, each costing up to INR 1.5 Lakh. Meanwhile, a traditional ventilator can go up to INR 4 to 5 Lakh. The company aims to scale up its production to 20K Covid-19 ventilators per month, and subsequently scale to six-digits. For this, the AgVa has also partnered with automobile manufacturers Maruti Suzuki.

For now, over 600 ventilators manufactured by AgVa have been installed in hospitals pan-India.

Bengaluru-based Biodesign Innovation Labs is also developing a portable ventilator called RespirAid for less-critical patients. These proprietary ventilators are ideal for stabilising a patient during a respiratory arrest by mechanically providing intermittent positive pressure ventilation at specific desired ventilator parameters. The company is planning to sell these ventilators for INR 50K to INR 70K per unit.

Biodesign is currently in the commercialisation state. In partnership with manufacturers like Remidio, the company plans to start its production with 2K to 5K ventilators and subsequently move to 10K-20K over two to three months. The company is also looking to non-exclusively license its products to conglomerates such as Tata, Reliance, Mahindra, and more that have mass production capacities for manufacturing RespirAid.

Pune-based Nocca Robotics is one of the few startups that are working on developing and providing a low-cost invasive ventilator, which is said to be more useful in treating Covid-19 patients. Around eight engineers from Nocca Robotics are currently working on the second iterations of the prototype ventilation solutions.

The company has also collaborated with IIT Kanpur and Indian Angel Network (IAN), who are managing the non-technical end of the development —  funds, grants, acquiring the necessary permissions for testing and manufacturing. Nocca Robotics expects to start the clinical trial of the ventilators by April 29.

For this, T-Works had collaborated with 20 startups and corporations — Honeywell, Qualcomm, Apollo Hospitals, Sunshine Hospitals and Prathima Hospitals, IIT Hyderabad, Mouser and GE Healthcare, Specteochem Instruments and others.

Ventilators are definitely the need of the hour. But while the Indian companies are developing their solutions, there are some others that have jumped in to offer an alternative and quick solution to use the available high-cost ventilators to its maximum content with ventilator splitters.

Bengaluru-based deeptech startups Ethereal Machines and Cradlewise are leveraging their technology to manufacture ventilator splitter, which can allow a ventilator to be used by two patients simultaneously with varying needs via differential pressure splitting. Learning from western countries, the companies have focused on preventing cross-contamination between paired patients.

Kaushik Mudda, cofounder of Ethereal Machines, also added that the ventilator splitters can also be optimised to share the ventilator between more patients, but it would not be viable as non of the patients will get the required quantity of oxygen.

The Struggles For Indian Entrepreneurs: Govt A Help?

Prime Minister Narendra Modi has also highlighted the need to make a robust healthcare system in preparation for the worst. PM Modi has also reiterated that despite having a health system much stronger than India, countries like the UK, US and Italy are suffering. Therefore, there is a need to keep one prepared for the worse.

The central government not only allocated INR 15K Cr to develop healthcare infrastructure but also placed orders for ventilators from China. However, even the world’s biggest factory has its own problems with production and mass manufacturing. Chinese ventilators producers clarified that they are willing to help, but scaling up production with most markets shut down is a challenge for them as well. Plus, India is not the only country that requires new ventilators. The companies have elaborated that they too rely on imported components to produce the ventilators.

While getting help from players outside India is proving to be harder than usual with the global economy slowing down. There is a need to boost the efforts by the Indian companies and stakeholders. But are the government and industry leaders doing enough?

Before March 31, only 15 devices came under the Central Drugs Standard Control Organisation (CDSCO). But post that the government revamped the guidelines to include all the medical equipment under the CDSCO. However, the drug regulatory body has allowed all companies to manufacture ventilators without the requirement of any licensing.

Gautham Pasupuleti, CEO and managing director at Biodesign Innovation labs, highlighted the government does not have any regulatory constraints, but there are certain quality compliance norms that need to be met before supplying.

“The government is not trying to enforce it in such a way that it is going to be a hindrance for the companies to take these products to market,” Pasupuleti told Inc42.

He highlighted that the government’s NITI Aayog, whose committee Biodesign and Agva Healthcare are a part of, has pushed them to mass manufacture the product. However, the company decided to get quality compliance certification from concerned authorities before mass manufacturing.

While this may come as a progressive step taken by the government to move things faster in this aspect, it has also raised the eyes of many industry experts citing quality issues. To produce any medical device there is a certain ISO standard called ISO1C485, but most of the companies that have entered the segment do not have a ISO certification.

A person involved in the government committee to procure ventilators who did not want to be named told Inc42 that the government has been pushing for such guidelines to manage the crisis, but is not willing to pass an official “written” order regarding the same. 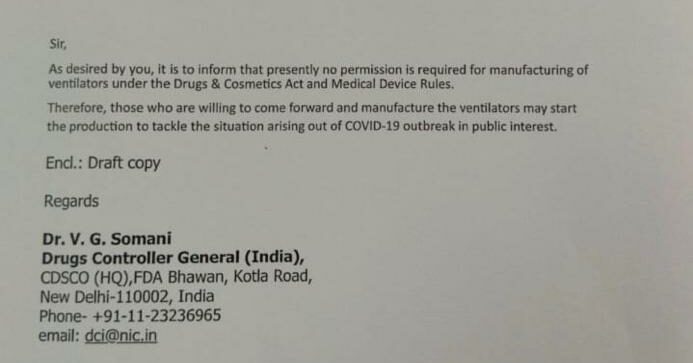 Referring to the policy as “opaque”, the official added, “No one is willing to take the onus, they just said that anybody can manufacture ventilators, but there is no clarity. Whether companies are allowed to make ventilators or not? What is the minimum standard? What is the approval process? There is no answer.”

Meanwhile, state-run Hindustan Lifecare Limited (HLL) has issued guidelines elaborating on technical features for ventilators for Covid-19. HLL is a nodal agency for procurement of ventilators.

These guidelines include specifications like turbines or compressors to accommodate central oxygen line needs of hospitals. The machine should have invasive and non-invasive and continuous positive airway pressure (CPAP) to make them versatile.

However, our source added that these guidelines are procurement specifications and not the minimum requirements. “Recently, Medtronic made the design of their old ventilator model PB 560 public. Tomorrow, if someone makes PB 560, which is still a model being used worldwide, that would not be able to match the specification of HLL,” the committee member added.

Just like China and other nations, the supply chain has been a pain point for Indian low-cost ventilators manufacturers. While companies are trying to increase their reliance on localised components and parts, it is still not possible as major parts required for the equipment are still being manufactured in the overseas market.

IIT Kanpur professor Amitabha Bandyopadhyay, who is also associated with Nocca Robotics, highlighted that the most critical components required for ventilator manufacturing are mostly imported from overseas. Therefore, there is also an obligation to produce low-cost ventilators as there is no point if bigger players come to the market with a cost-effective solution.

Here, both central and state governments have been helping out companies in procuring their imports from other countries. Bandyopadhyay highlighted that the central government has been doing a “fabulous” job in procurement of material.

“When it comes to procurement or giving out permissions to the companies and their suppliers to move around in the city, India has been doing a fabulous job. They got our import from Singapore, under the most critical circumstances in Singapore,” he said.

On April 21, AgVa Healthcare founder and CEO Diwakar Vaish also took to Twitter to thank the government for helping the company in the procurement of all the parts for our ventilators.

Big milestone achieved, all the parts for our Ventilators have been procured & shipped. Child part production is in full swing. Next week onwards, looking at producing 320 ventilators in an 8-hour shift
Big Thanks to @MoHFW_INDIA @investindia @PMOIndia @narendramodi @Maruti_Corp

As far as procurement from Indian companies is concerned, the battle between essential and non-essential goods have also made it to the ventilating solutions. Ethereal Machines’ Mudda highlighted that since most industries such as steel production and mass 3D-printing being shut, it is a hassle to procure material from them. For this, producers will have to get special permissions in order to open up their manufacturing.

Mudda also added that the lack of labour and workforce is another challenge for the industry.


Recently NITI Aayog has set up a committee, chaired by CEO Amitabh Kant, to bring more private companies and startups on board to produce health equipment and personal protection equipment (PPE). The committee has also invited eight startups, two of which are AgVa and Biodesign.

Even automobile manufacturers Mahindra Group’s Anand Mahindra has committed to start manufacturing ventilators in its manufacturing facilities to meet the shortage. Besides this Maruti Suzuki and Hyundai have joined the bandwagon.

Since these companies have no expertise in manufacturing healthcare solutions, they will be joining hands with healthcare businesses or startups, who have the technology but need a partner to scale up production. Recently, Hyundai partnered with Air Liquide Medical Systems to develop intensive care unit ventilators.

Meanwhile, other players have also come forward to provide financial support to the Indian innovators. Digital payments giant Paytm has also announced that it will be investing INR 5 Cr to help innovators and companies in finding solutions to tackle the potential shortage of clinical ventilators and other medical equipment. AngelList too has set up a special fund for this purpose.

Meanwhile, Wingify founder Paras Chopra has announced an online hackathon for startups developing solutions for coronavirus pandemic. The wheels are definitely moving, but the question is how much more time will it take to actually implement the solutions and solve the ventilator crunch?