The 16 Most Active Angel Networks In The Indian Startup Ecosystem

The 16 Most Active Angel Networks In The Indian Startup Ecosystem 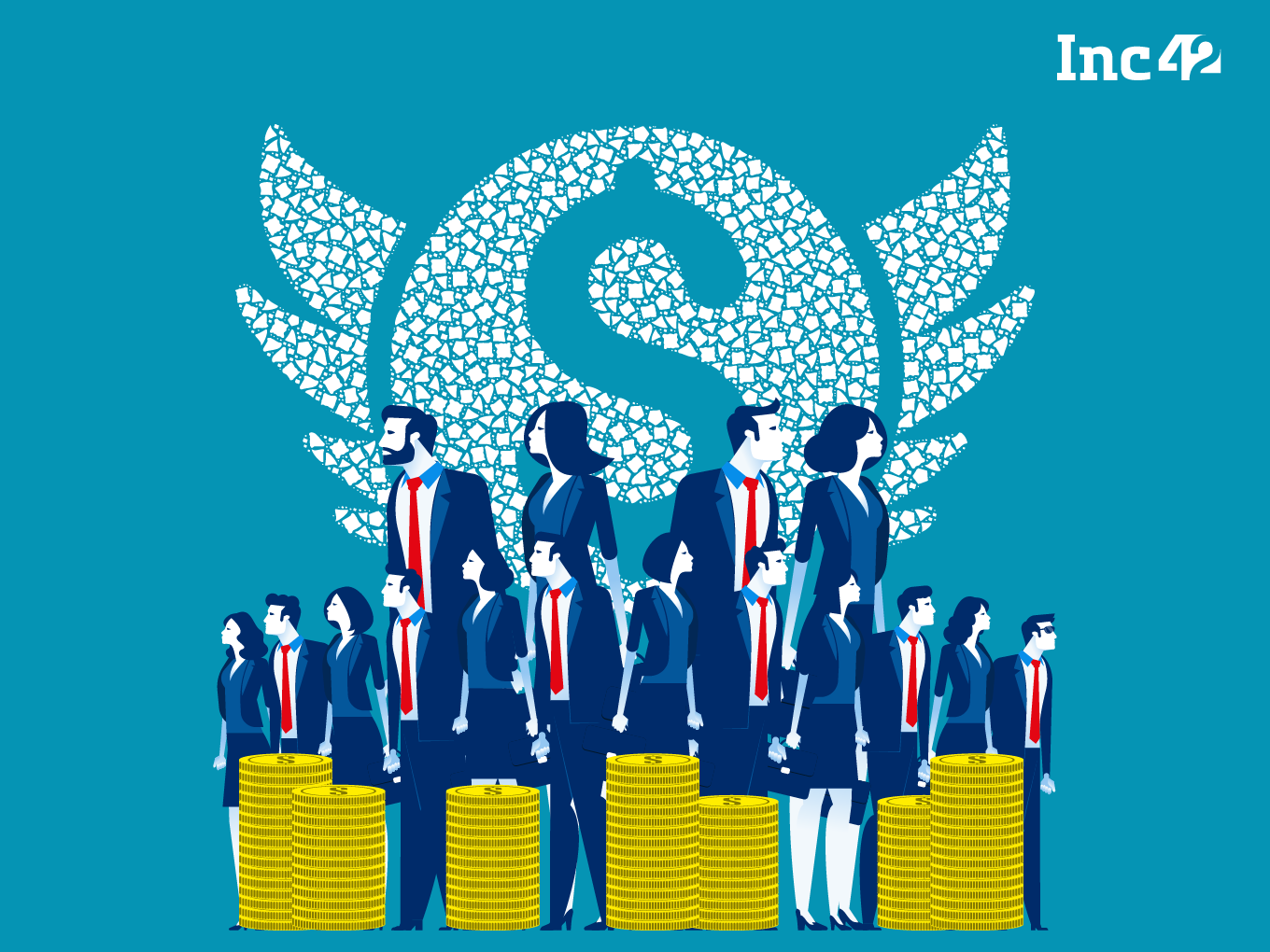 In India, there are around 30 active angel networks, according to DataLabs analysis

AngelList, Venture Catalysts, LetsVenture are some of the most active angel networks in India

This article is not meant to be a ranking of any kind and is simply a list of angel networks that are the most active based on the deals announced.

For any startup, there is one crucial factor which determines the success of the company — fundraising. If it doesn’t come right on time, it’s more than likely that the startup is left with no option but to wind up shop. So there’s a reason that early backers are called angel investors in the world of startups, and angel networks — or groups of angels — are becoming increasingly common in the Indian context.

Similar to other countries, new startups in India gravitate towards angel investors for the first investment, and they are largely preferred over VCs, thanks to the lower equity demand and the higher chance of VCs rejecting early startups without products. Of course, other options such as family offices, investment banks, and other private companies also exist, but angel investors bring in a unique perspective and open up mentorship and market opportunities, besides helping raise funds.

Angel investors have reached their positions after years of experience in the startup ecosystem. It is this experience which attracts startups and usually angels pool their funds together to invest in startups as a group and hedge the risk. The guidance and mentorship provided by angel investors and these angel networks is something that startups desperately seek, especially those in the early-stage.

While venture capitalists hunt for mature startups that have a proven track record, even startups which are just beginning or have found the initial legs need support through funding. That’s when angel networks provide a lifejacket to these startups in the form of large funding and share the expertise to help them with their day-to-day and larger problems.

The 16 Most Active Angel Networks In India

In India, there are around 30 such angel networks, according to DataLabs By Inc42, which have helped startups such as Myntra, Khatabook, Wow! Momo, BharatPe, Yulu, Testbook among others become the brands they are today.

Spread across states and cities, these angel networks are a crucial factor in discovering startups from smaller pockets that have the greatest potential to shine in the Indian market. From metros to small towns, angel networks have spread their wings far and wide in India. 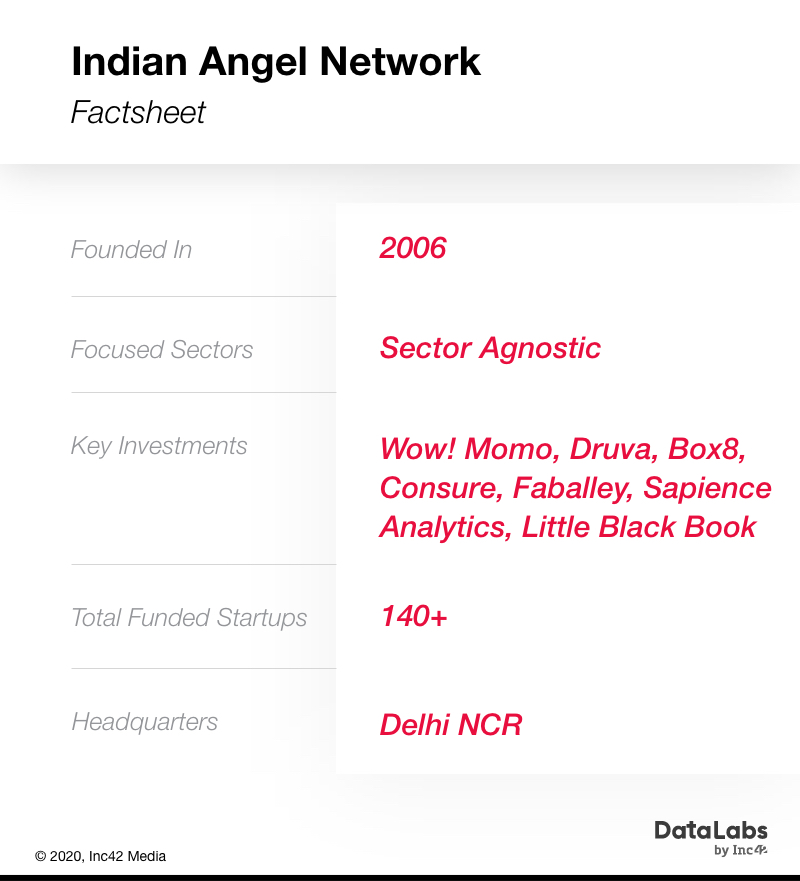 Founded in 2006, Indian Angel Network aims at investing up to $1 Mn, with an average ticket size of about $400K-$600K, and exiting in a three-five year period through a strategic sale. IAN is a SEBI-registered early-stage fund with more than 470 investors from around 11 countries. It also runs a VC fund which has raised over $33.2 Mn since its inception in 2017. 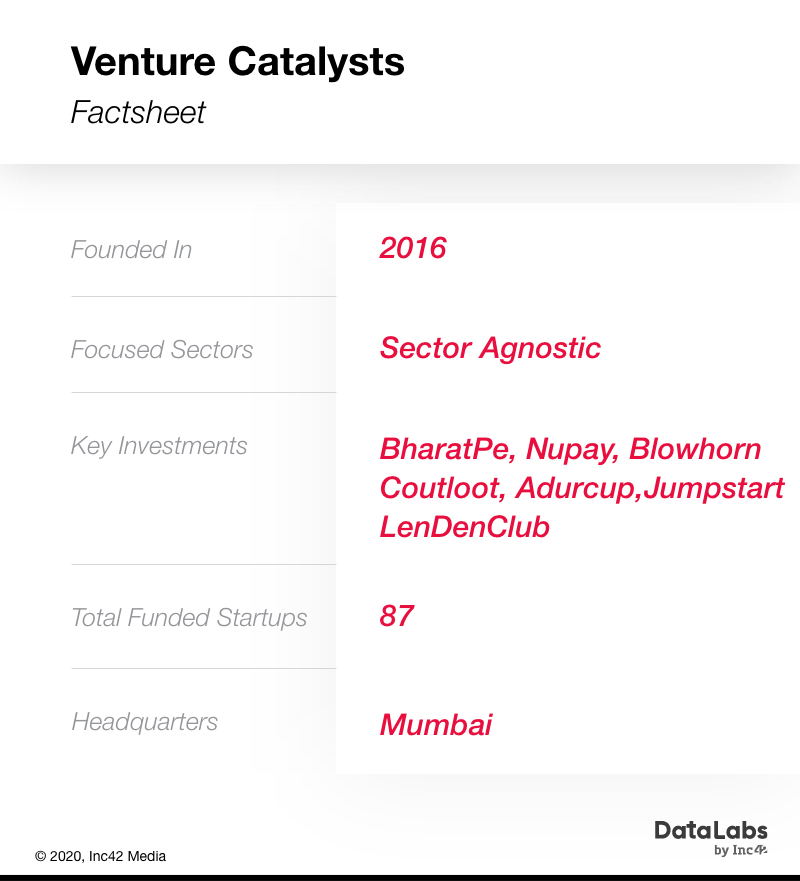 Venture Catalysts is a seed investment and innovation platform that wants to improve the “innovation quotient” of India. It invests around $500K to $1 Mn in early-stage startups that have the potential to create enduring value over a long period of time.

Additionally, it helps startups raise money from HNIs and then supports and develops them for a period ranging from 6-12 months. Recently, in an attempt to get family offices directly involved and to open up more deals to these offices, Venture Catalysts launched a FamilyOffice initiative, which connects investors with promising startups. 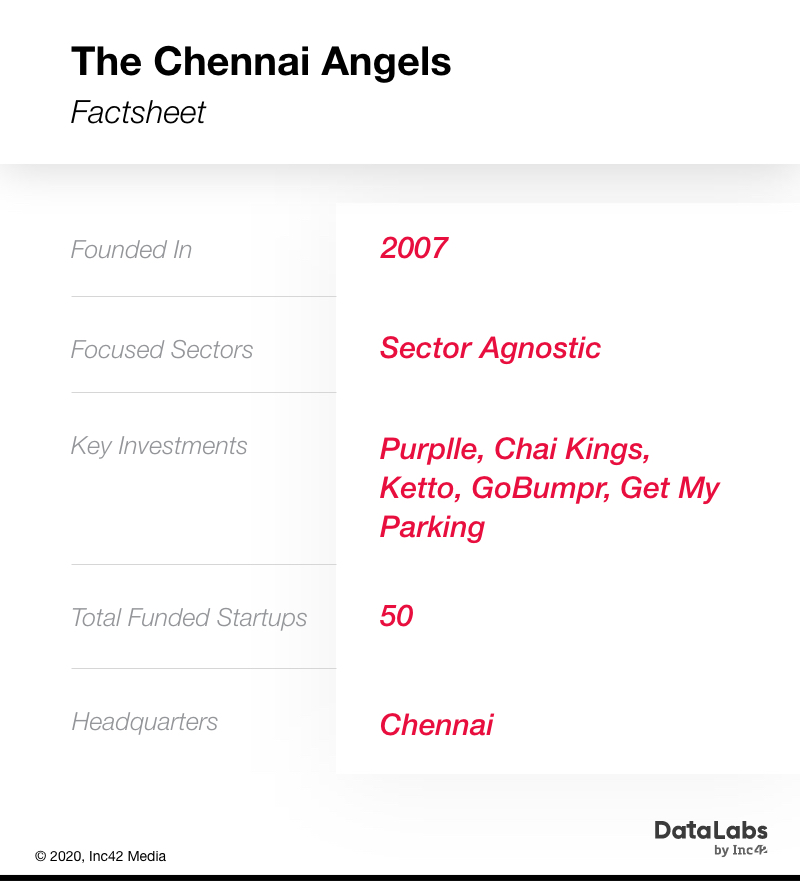 Established in November 2007, the Chennai Angels works with the objective of fostering entrepreneurship with giving importance to nurturing and mentoring of new generation entrepreneurs. It’s one of the few angel networks in Tamil Nadu focussing on early-stage startups. Since inception, the Chennai Angels has invested a total sum of over INR 75 Cr in 50 startups. 29 of these start-ups are still active in its portfolio. The Chennai Angels claim to have got 10 exits at an average 3.7X return on investments. 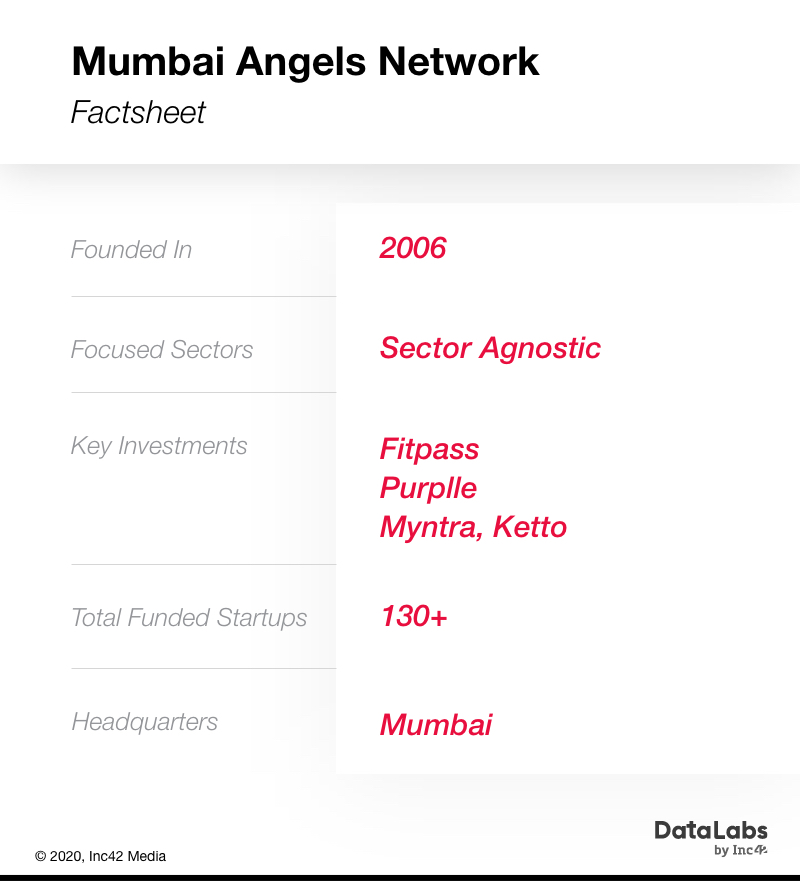 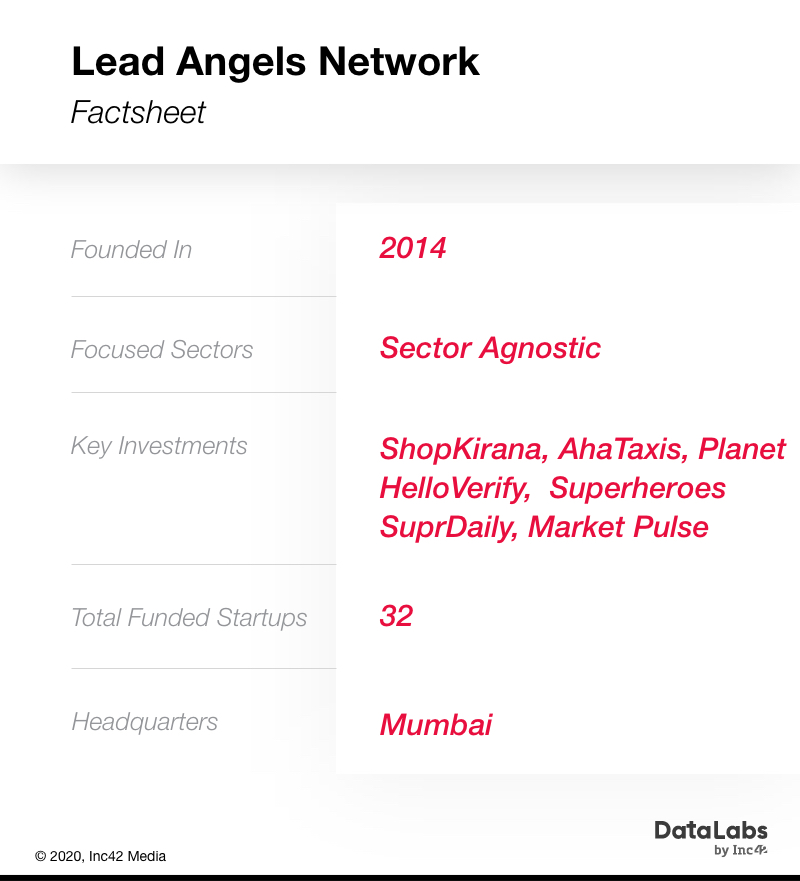 Mumbai-based Lead Angels Network was founded in 2014. The network has grown rapidly and currently has a presence in Mumbai, New Delhi, Ahmedabad, Bangalore and Hyderabad. So far, it has invested in 32 startups. The angel network helps startups right from incorporation to acceleration and in advisory services for follow-on funding. 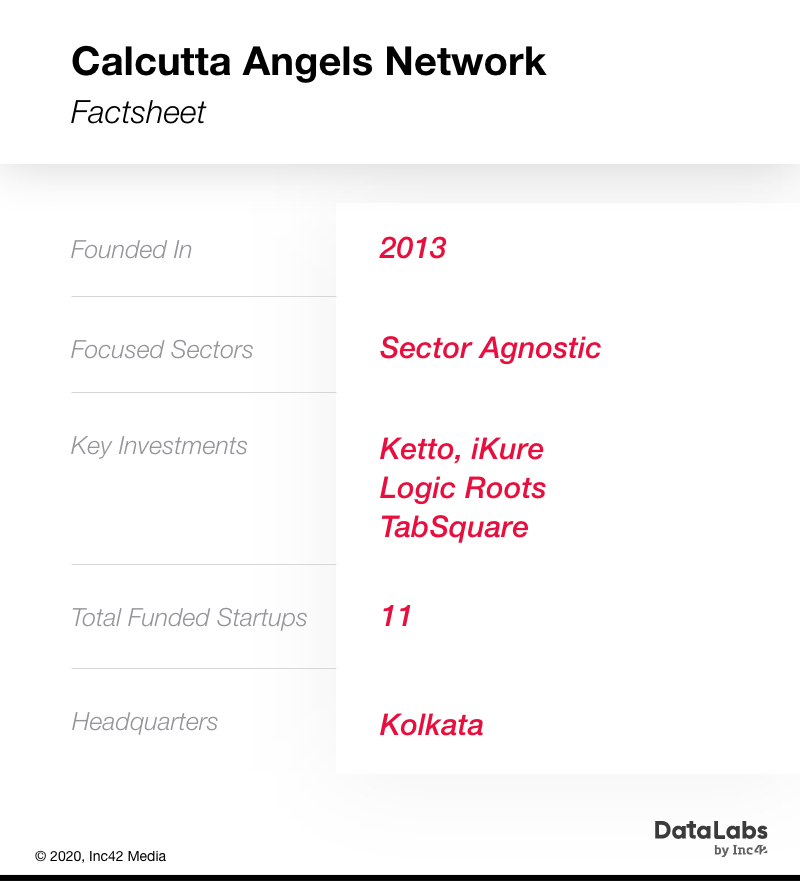 Calcutta Angels Network (CAN), which started out in 2013, is the first angel investment network in eastern India. With a membership strength of around 75 members, CAN has invested in 11 startups from across India. In January 2018, Calcutta Angels Network announced a partnership with Mumbai Angels wherein both work together as a single team. 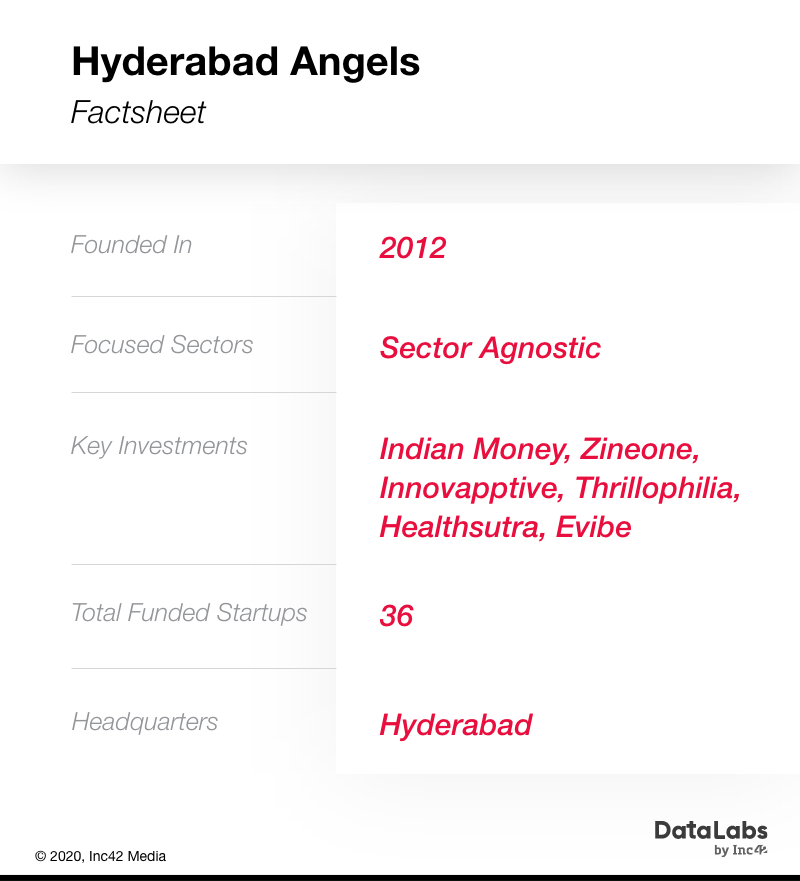 Founded in 2012, Hyderabad Angels believes in being involved at a deeper level than just funding a startup. It said it always looks to enter deals where it can be a value-add for the startup. Located in Hyderabad, the angel network invests in startups from all over India and other countries including the USA, UK, Singapore and UAE. 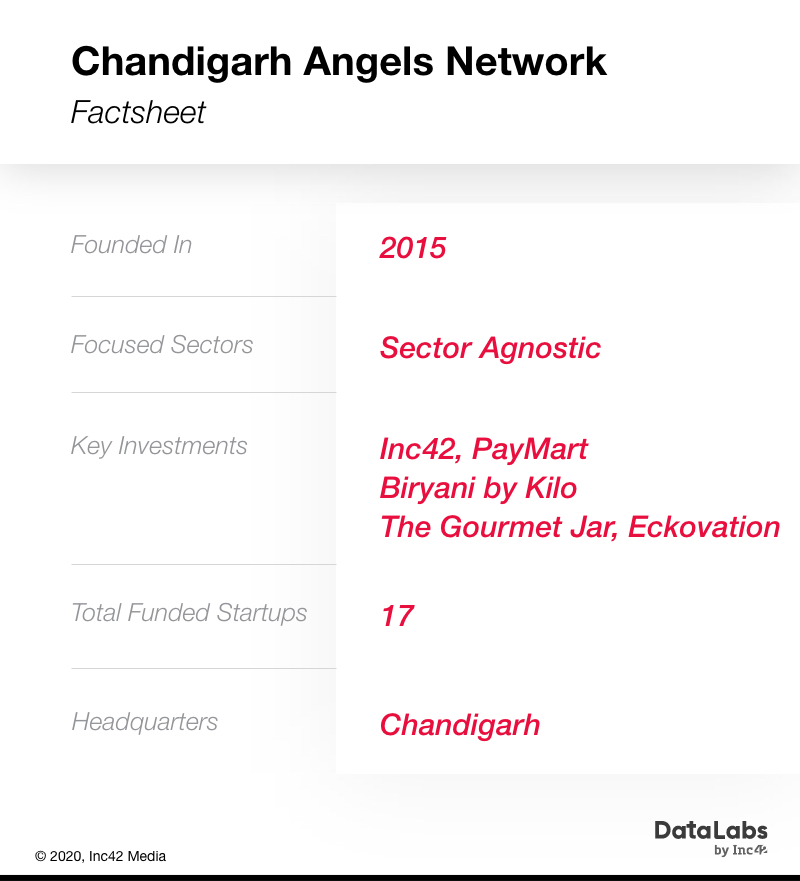 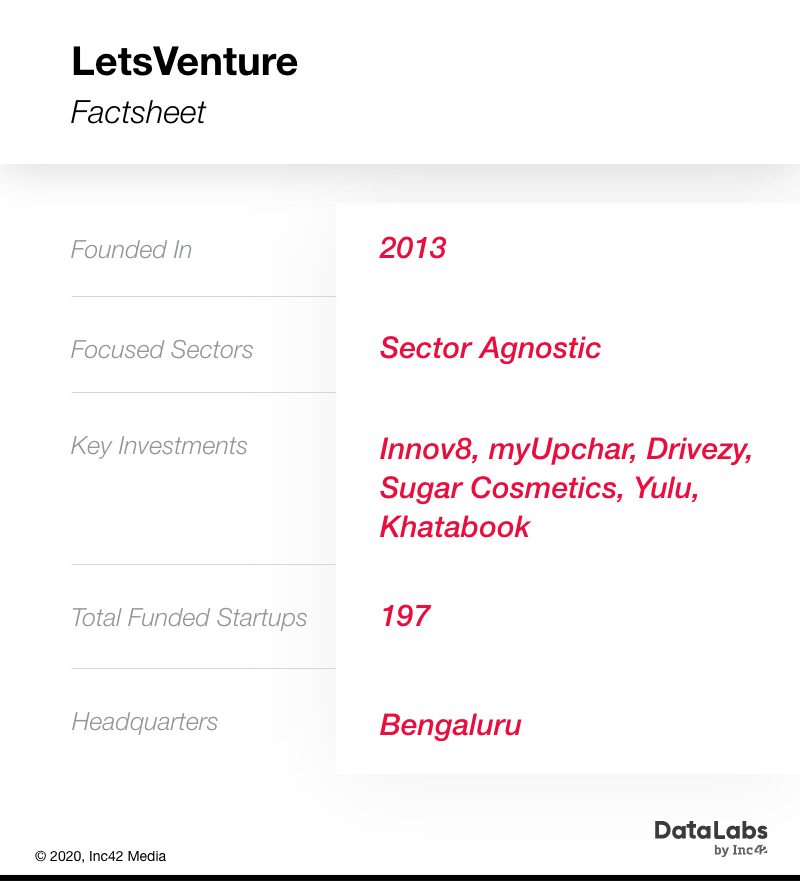 Located in the startup capital of India, LetsVenture enables startups looking to raise seed or angel money to create investment ready profiles online, and connect to Investors. LetsVenture also allows startups to get their business plans reviewed by their experts as well as connect to mentors. 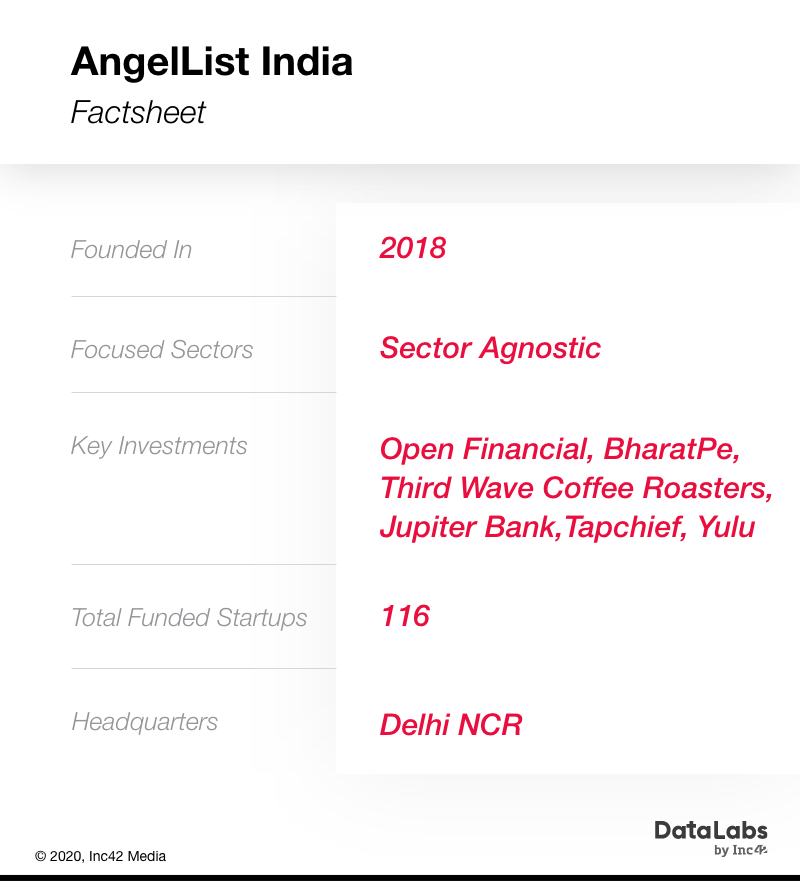 Silicon Valley-headquartered AngelList made an entry into India in January 2018 by launching its popular Syndicates platform. The Syndicates platform allows investors to invest in promising tech startups alongside experienced VCs and angel investors.

In 2019, AngelList India launched two new India-focussed funds — The Collective and Angel Fund. The Collective invests around INR 1 Cr each in startups annually. This fund has also given quick capital access to AngelList’s Syndicate leads. On the other hand, Angel Fund enables individuals and institutions to raise small amounts of capital and then deploy it over the course of the next six to twelve months. 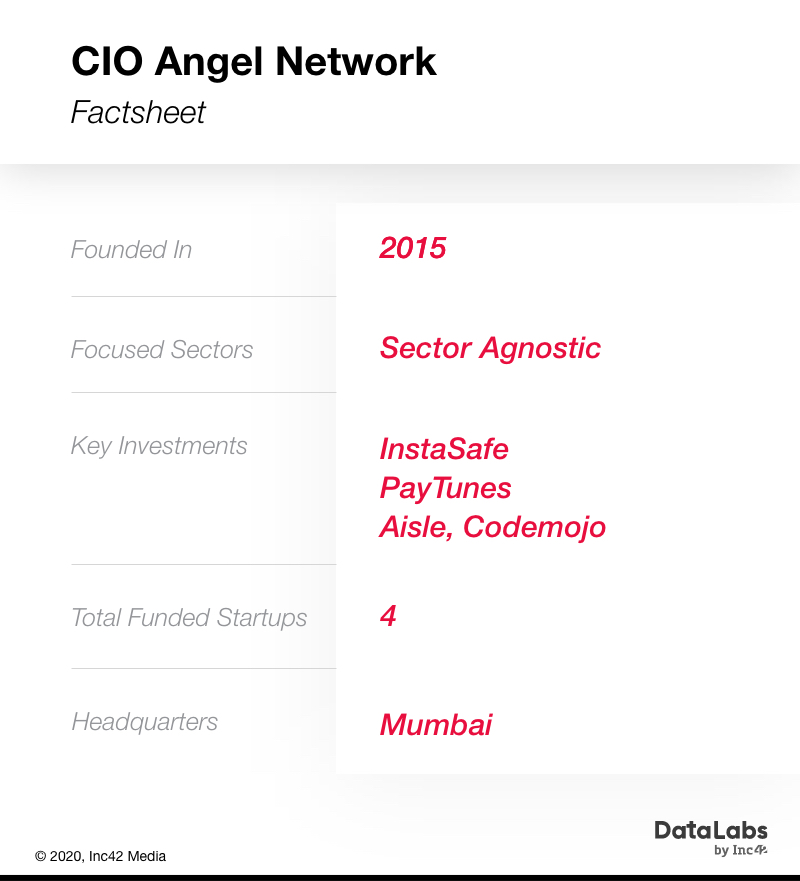 CIO Angel Network (CAN) was founded in January 2015. CAN is an angel network located in two cities – Mumbai and Delhi. CAN focusses on technology-enabled startups across sectors. The angel network aims to accelerate seed-stage startups through fundraising support and customer discovery. Founded in 2012, ah! Ventures brings together promising businesses and investors by creating wealth creation opportunities for both. The angel network leverages a blend of customised services, skill, and industry, and domain experience to help startups as well as investors. 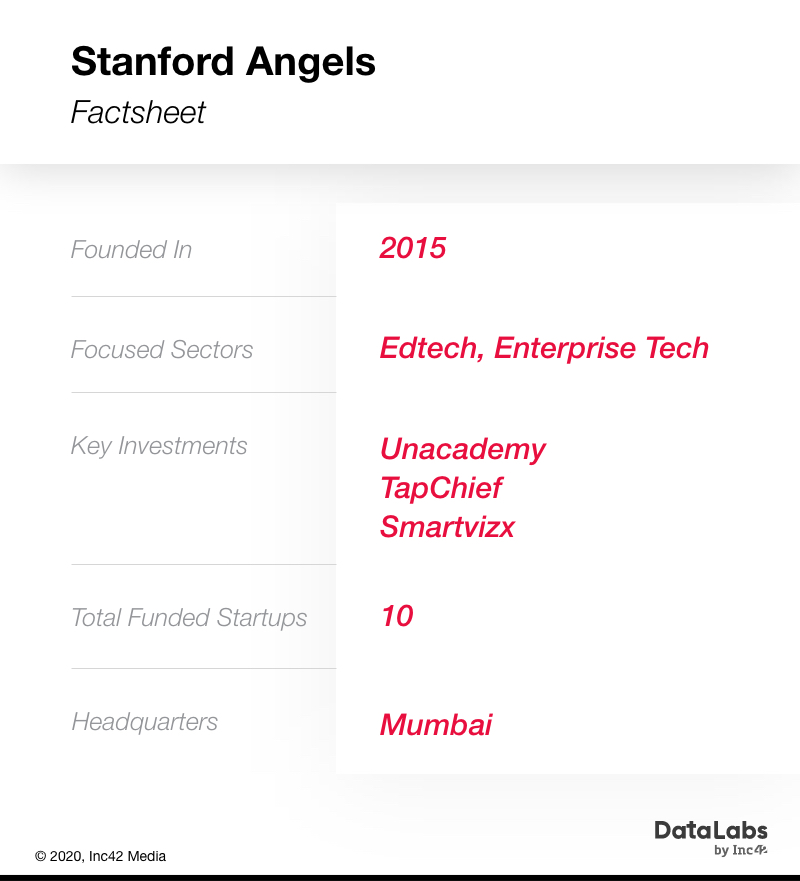 Founded in 2019, Stanford Angels and Entrepreneurs India (SAE India) is a Stanford Alumni Association group based in India. SAE India seeks to strengthen startups founded by Stanford’s alumni by helping them to build relationships with entrepreneurs and alumni investors. SAE India has been set up in collaboration with Silicon Valley-based SAE, which was founded in 2010. 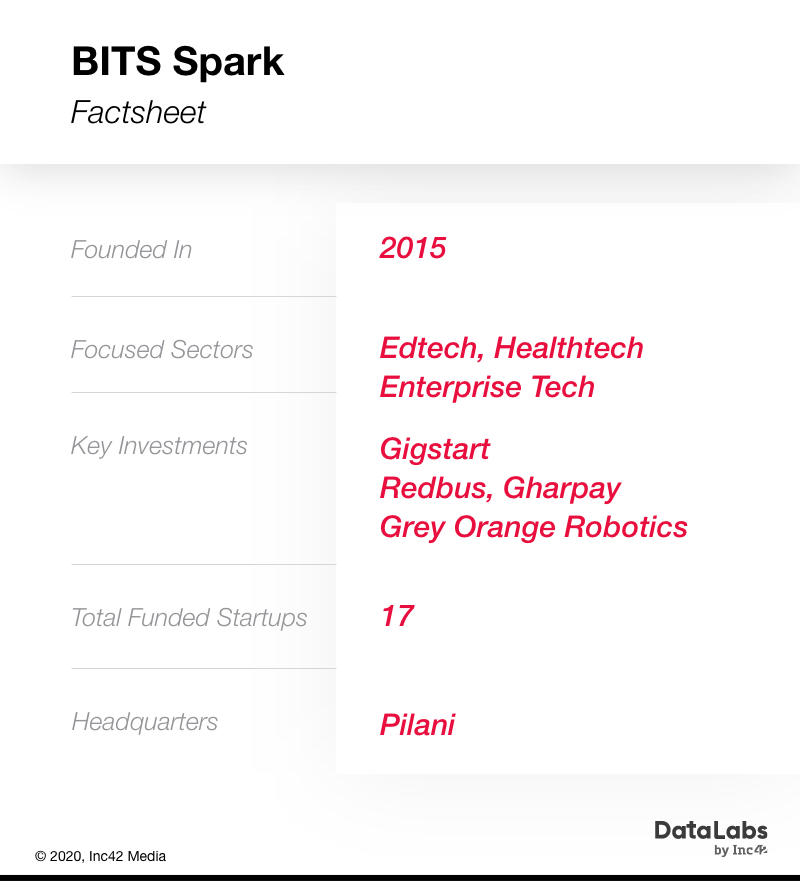 BITS Spark was started by an alumni group of BITS-Pilani, in 2015 with an aim to help current and graduated students of the university to get funding and mentorship support. Besides students, university officials, and faculty members also provide their help to these startups which are created mostly at the university itself. 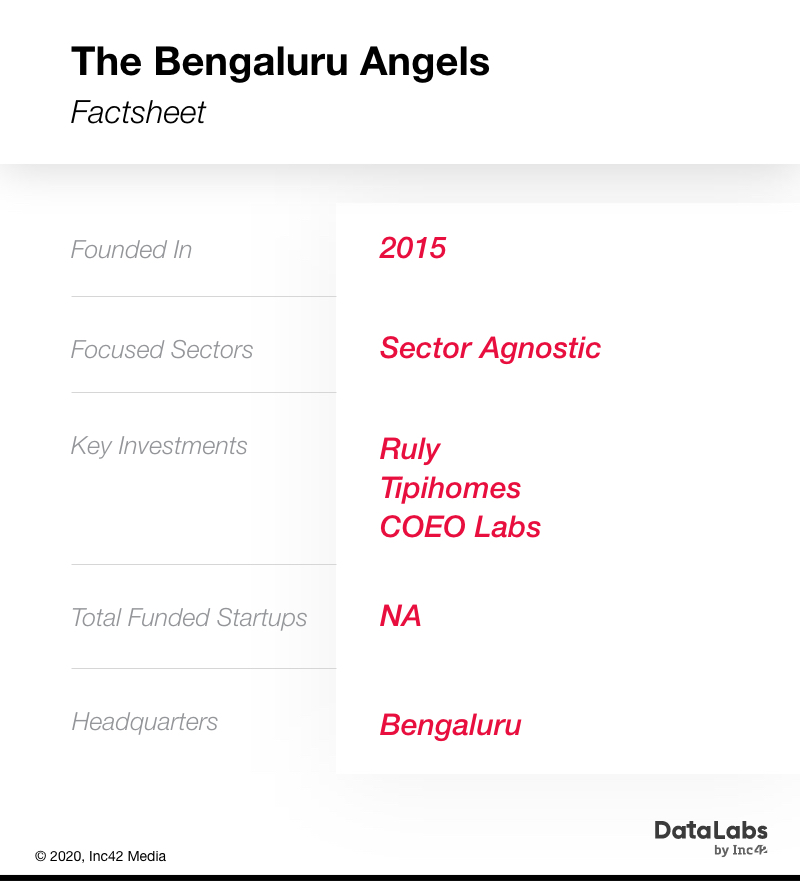 The Bengaluru Angels is an angel network platform which helps early-stage startups to grow during their initial phase by providing them with support, funding opportunities, mentorship, among others. Both investors and startups can explore, interact and build business relationships via the Bengaluru Angels. 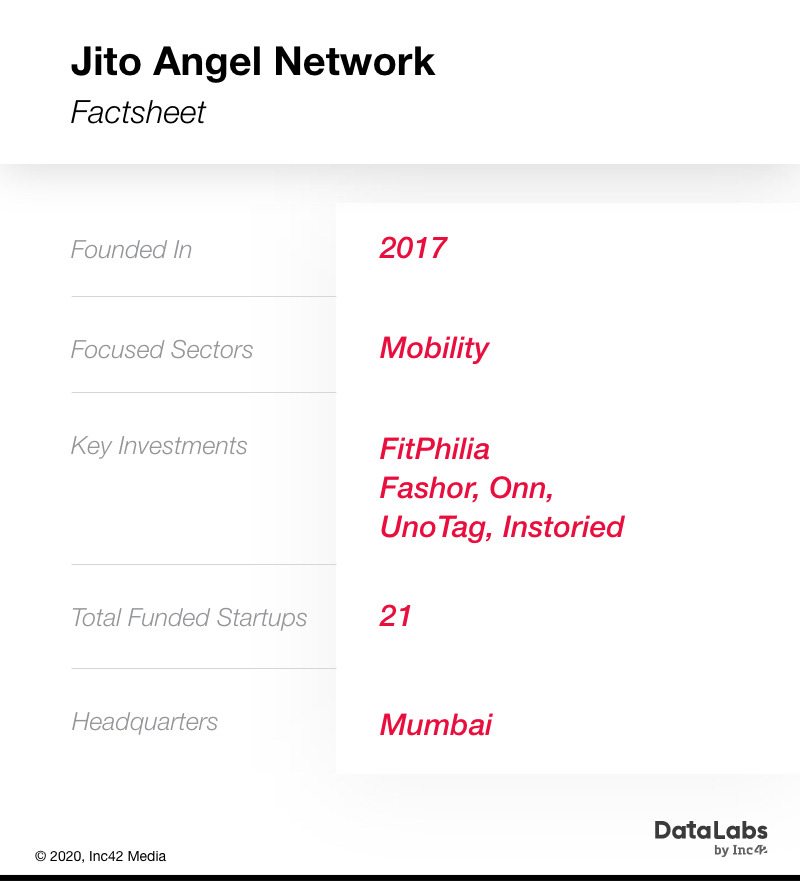 Jito Angel Network is a part of JIIF, one of the leading angel funding networks and incubation centres in Mumbai. So far, JIIF has incubated 34 startups and funded another 16 over the past two years.

Founded in 2017, JIIF is a subsidiary body of Jain International Trade Organisation (JITO), with an objective of providing mentoring, incubation, and funding support to Indian startups.