Startup Watchlist: Indian Deeptech Startups To Watch Out For In 2020

Startup Watchlist: Indian Deeptech Startups To Watch Out For In 2020 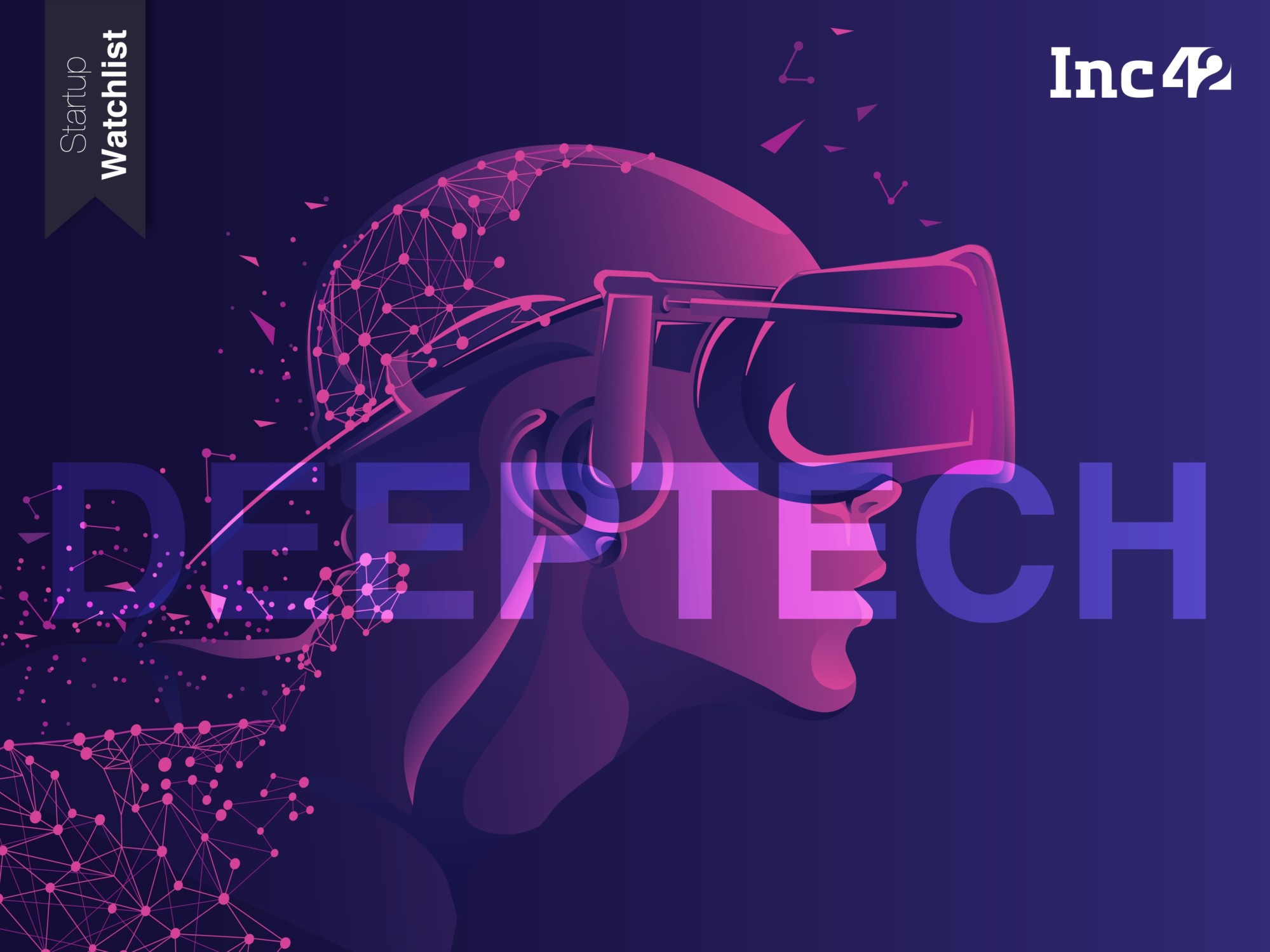 Most major conglomerates and MNCs are leveraging emerging tech such as AI/ML, IoT and blockchain

Total funding in deeptech dropped marginally in 2019 with $136.14 Mn raised by deeptech startups

The Inc42’s annual series, Startup Watchlist brings together the list of top growth stage startups to watch out for in 2020 across industries including  — agritech, deeptech, logistics, healthtech, edtech and more.

This article is part of Inc42’s Startup Watchlist, an annual series in which we list the top startups to watch out for in 2020 from startup sectors such as agritech, deeptech, logistics, healthtech, edtech and more. Explore all the stories from the Startup Watchlist 2020 series here.

When one thinks of artificial intelligence or AI, the highest recall is for application in the consumer space. After all, the rise of Siri, Alexa and Google Assistant and other virtual assistants has made AI a household name. But beyond AI — which by itself is an umbrella term, rather than a singular technology, there’s a whole world of applications built around emerging technologies. Collectively, this mass of applications, products and services built around AI, Internet of Things (IoT), blockchain, machine learning, big data, robotics and virtual reality is known as deeptech.

While investment numbers in the deeptech sector have not been encouraging in the Indian context, a recent report by NASSCOM states that startups are increasingly driving focus towards the B2B space and that there has been rapid growth in the number of deeptech startups. This growth is backed by over 18% of all startups in NASSCOM’s survey admitting to leveraging deeptech applications, products and services.

In its Annual Tech Startup Funding Report for 2019, DataLabs by Inc42 observed total funding of $136.14 Mn in 2019 in the deeptech sector in India, which is a slight drop from 2018. While in the context of the overall ecosystem, the fall is not that significant, for the nascent deeptech sector, it’s a big drop. Looking at the market, a few factors come to mind when understanding this fall — the lack of high-skilled workers, stronger presence of global tech giants, low-level of readiness among Indian businesses and SMEs, weak intellectual property framework and lack of R&D spending.

While 2020 could yet see plenty of investments in the deeptech sector in India, the startups that have already gained funding would be gunning to expand their presence. So Inc42 picked out the most promising startups from the deeptech sector, which may end up making the biggest impact in the market.

Editor’s Note: The below list is in alphabetical order and is not meant to be a ranking of any kind.

Cofounder Yashas Karanam told Inc42, “Starting 2021, after space qualification of thrusters, Bellatrix will be selling its propulsion systems to satellite manufacturers and operators worldwide. The target market will have companies like Airbus, Thales, Boeing, and over a hundred small satellite manufacturers.” The company plans to set up offices in the US and Europe by the end of 2020.

Bellatrix touts itself as the first Indian startup to be working with ISRO on joint technology development.

In terms of market opportunity, Karanam believes that deeptech companies work on industry-leading technologies, so there is ample opportunity for companies to chart new paths and drive where technology takes the future. “Comparing a startup and an MNC working on a regular product/service, the MNC will have the muscle power to capture most of the market leaving little for startups to survive. However, in a new space (deeptech), both the MNC and startup may need to put similar kind of efforts to develop the technology. This is where a startup can use agility as a springboard to make its mark,” he added.

CynLr is a robotics research startup that is combining a form of machine learning called reinforced learning and machine vision to create a visual object intelligence platform. CynLr’s work allows manufacturing companies and industrial units to deploy robotic arms that can see, recognise and manipulate objects in random unstructured environments, which makes it easier for such systems to be deployed in unconventional facilities. For 2020, the company plans to invest in Research & Development for robotics and reinforcement learning, to develop a visually intelligent robot that can pick and handle any object from clutter.

Cofounder Nikhil Ramaswamy told Inc42, “The country’s startup ecosystem seems to be searching for the next theme of startups to bet on after e-commerce and utility apps, and it sure looks like it is heading towards a focus on IP and hard-tech. We are seeing several deep-tech VC funds, accelerators and incubators mushrooming around the country and hopefully, the traction will gain further momentum in the next 3-5 years, and at least some of us entrepreneurs will script a success story for the ecosystem while also delivering on investor returns.”

Founded in 2016, Detect Technologies aims to bring efficiency to industries through automation of standards and guidelines. The company offers a real-time pipeline monitoring system that lets companies predict possible leakages or take actions to prevent leakages and accidents. It also offers an intelligent drone for reliable inspection of assets and a platform that uses visual data from multiple sources such as UAVs and fixed cameras to track the progress of the activity, the durability of resources and other safety-related indicators for construction projects.

Cofounder Daniel Raj David told Inc42, “We believe India has a huge advantage in terms of availability of workforce to build new solutions, both software and hardware-based solutions. As the Indian market is both huge and unique compared to global markets, it also gives a unique opportunity for creating more innovative solutions.”

However, he added that the biggest challenge for the deeptech sector at present is the crunch in the capital, manufacturing facilities and funding opportunities as compared to global markets. For 2020, the company plans to take its platform to the global market.

Myelin Foundry is building AI-powered applications and tools with video, voice and sensor data for edge computing devices such as smartphones, wearables, televisions and drones among others. It works across multiple sectors including media and entertainment, and healthcare.

The company has a SaaS-based monetisation model where the customers leverage the AI-based products and pay per petabyte of video, voice or sensor data that is processed through or as per the usage of the product.

Cofounder Aditi Olemann told Inc42, “Imagine the amount of video, voice, speech, sensor data that is created and consumed on edge devices every minute, both by end-users and by industrial processes. Artificial intelligence for unstructured data on the edge devices is, therefore, emerging as one of the biggest deep tech opportunities, cutting across industries.”

However, she added that the biggest challenge for deeptech startups in India is the long product development cycle which makes it difficult for them to raise funding from traditional sources. For 2020, the company will be launching Fovea AI on a commercial scale. Olemann said Fovea delivers near-zero re-buffer ultra HD viewing experience on edge devices, independent of the video content’s original quality and network bandwidth limitations.

The startup’s expansion plans will first focus on India-like markets before launching its product in more mature, premium geographies.

Combining machine learning and facial recognition, deeptech startup Orbo.ai offers an edge-based visual enhancement stack for the media and entertainment, manufacturing and healthcare sectors. The visual enhancement stack caters to embedded devices and other edge or mobile devices. Orbo claims to have worked with companies such as Intel, Cisco, GE Healthcare, Samsung, TCS, KPMG and DataMatics among others. For 2020, the company plans to open its visual enhancement stack, SDK, API for the large set of customers packaged in a SaaS offering.

Cofounder Manoj Shinde told Inc42, “Orbo.ai’s edge-based facial model uses neural networks to identify facial landmarks such as jawline, the borders of lips, eyes, nose, hairline, and contours. At the moment, we track about 106 landmarks on the face. It allows you to map the exact faces and utilise it in various scenarios.”

He added, “Our 80% of the revenue comes from subscription with enterprise engagements and rest 20% from licensing of our IP to OEMs.”

On the revenue model, cofounder Siddharth Mall told Inc42, “We get paid for every unit label we provide to customers. Our top-line grew by 3X in 2019. By improving the core software, machine learning model and streamlining the process, we improved our margins significantly and are profitable now.”

Playment claims to have worked with over 100 customers in more than 12 countries across domains such as autonomous driving, robotics, face recognition and drones, powering business applications in industries like transportation, surveillance, agriculture, manufacturing, retail & sports. Talking about the deeptech industry in India, Mall told Inc42, “AI will deeply impact all industries. Machines would be able to recognize objects, read through agreements, transcribe audio calls, translate languages – assisting humans to do more. Labelled data to AI is equivalent to writing code to the software. Robust data infrastructure is critical.”

Mall added that unlike Silicon Valley, deeptech in India is still at a very nascent stage primarily because of the lack of adoption from the domestic B2B/enterprise market for startup products and services, and the talent crunch. “There lies an opportunity for Indian entrepreneurs to build great products for the global audience but it will take a lot of belief and courage. With the success of first-generation SaaS companies like Freshdesk, Browerstack, entrepreneurs have started to think big and employees have been exposed to relevant scaling challenges,” he added.

The model has a small one-time cost of hardware required to digitise the plant-level machines, and then a monthly recurring charge per machine. The deeptech startup claims to have 10 customers including the likes of TVS Motors and ITC.

Cofounder Aniruddha Banerjee told Inc42, “The industrial AI deployments are complicated and need upper-management buy-in for proper plant-wide implementation. There is a need to understand the longer-term benefits of deep-tech solutions before implementing them in PoCs in the plant.”

For 2020, SwitchOn plans to add high-speed AI-based vision systems in the portfolio, to identify issues in milli-second latency to integrate directly with the machines. “We are also building more powerful edge compute systems to completely decentralise our compute and do the entire processing inside the machines on the shop-floor. We are currently expanding to the USA and EU to deploy in some of the more developed automakers,” Banerjee added.

The Indian deeptech startups are selected for the Watchlist based on editorial criteria as well as the recent funding, stage, growth or scale achieved in the preceding year and how it has differentiated itself or its model in a competitive market.