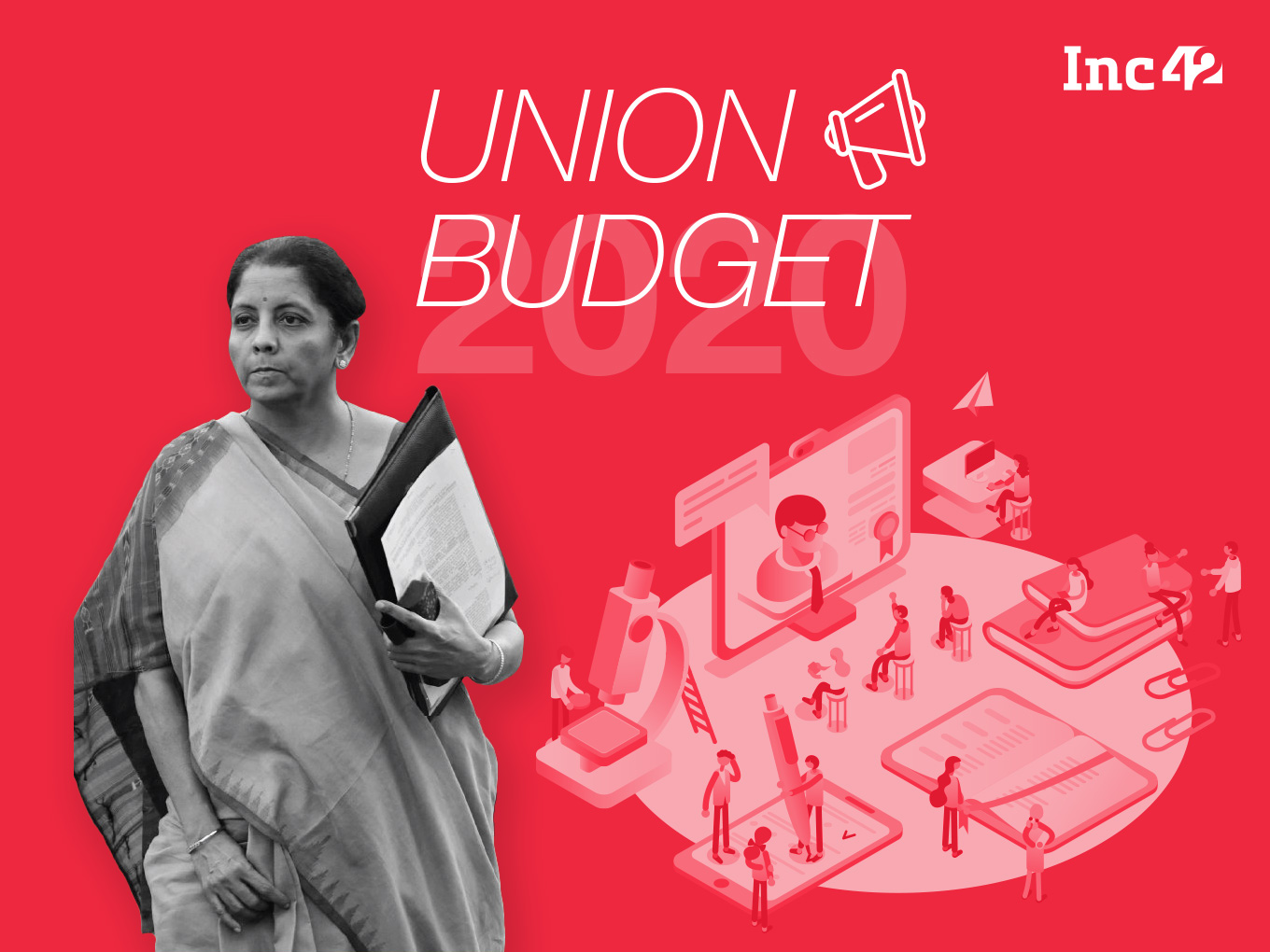 India’s R&D spending is way behind the likes of US, Israel and China

“The government will bring in a New National Education Policy to transform India’s higher education system to one of the global best education systems,” – Nirmala Sitharaman at the Union Budget in July 2019.

As the finance minister prepares for the Union Budget 2020 on February 1, she will have to perhaps just re-read the above statement and many others such as creating a National Research Foundation and other ambitious projects and schemes, which have been announced in the past. Beyond claims and promises, the need of the hour is action, as India’s working-age and young population advantages are not going to last forever.

The government’s K Kasturirangan Committee submitted the draft National Education Policy in May 2019, but this is yet to be enacted by the government, which is instead caught in a world of global protests and criticism over a slew of new laws and acts in the past few months.

This political maelstrom means the Indian government has had to scramble ahead of the Union Budget 2020 to tackle various sector-specific issues, including in education.

While we will discuss the umbrella policy on education and the scope that edtech startups have in the Indian context, it’s clear that things are definitely not encouraging as they were expected to be. Many edtech startups, entrepreneurs and investors that Inc42 spoke to talked about the systemic issues and the need to overhaul several different parts of the system.

A country of 1.3 Bn population, with a badly fractured conventional educational system, undoubtedly, edtech has fast emerged as an alternative and complementary sector to traditional education.

With over 4,000 edtech startups currently active in the country, the industry is expected to hit $2 Bn in India by 2021. Supported by the central and state governments the online educational system is also expected to grow at 8x a year.

Not the healthy and vibrant edtech industry that one might expect given the immense potential that India promises. Clearly, there are gaps that finance minister Sitharaman must address to set the stage for edtech.

The Narendra Modi government has been applauded for creating INR 10,000 Cr Fund of Funds for Startups (FFS) to encourage tech startups in the country. The government has further created Atal Tinkering Labs, an incubator and workspace where young entrepreneurs and talent can shape their ideas and learn innovation skills.

But that’s not enough. “You can’t create a successful startup ecosystem without encouraging the R&D ecosystem in universities. Have you seen the state of R&D at various leading universities across India? It has only worsened over the years,” one member of the government committee on education told Inc42 on the condition of anonymity.

“You could make India a $5 Tn economy; but, you can’t sustain it without making India a knowledge economy.”

In fact, the draft National Education Policy 2019 does delve into this issue. It states,

Recounting the sorry state of R&D in India, the draft says that the number of researchers per lakh of the population was shockingly only 15 in India, compared to 111 in China, 423 in the United States, and 825 in Israel (Economic Survey of India 2016-17).

As a direct consequence, India severely lags behind in the number of patents and publications produced — according to the World Intellectual Property Organisation (WIPO), China made as many as 13,38,503 patent applications, with just 10% being made by non-resident Chinese, the USA made 605,571 patent applications, while India made a mere 45,057, of which over 70% were by non-resident Indians.

Earlier, former RBI governor Raghuram Rajan had answered the question, “What industries should we focus on, what should we encourage?” with an unequivocal call for creating the right atmosphere for innovation, saying,

“Let us not encourage anything; that might be the surest way of killing it. Instead, let us make sure we create a good business environment that can support any kind of activity, and then let our myriad entrepreneurs figure out what new and interesting businesses they will create.”

Pretty much every edtech stakeholder told us the government needs to put in place an Innovation fund to strengthen the R&D infrastructure across India.

Rajeev Tiwari and Anurag Gupta, founder and director of STEMROBO Technologies, an edtech startup in the interactivity and creativity space for K-12 students called for increased focus on innovation and intellectual property rights in education at the school Level. In a joint statement shared with Inc42, the duo said, “India improved its ranking in the global innovation index by five places to 52nd in 2019 from 57th Position in 2018. But still, there is a lot that needs to be done if we have to take innovation at the grassroots level and make it significant for the masses. The budget can focus on a more comprehensive and extensive way our young students in the K-12 segment get exposure to innovation and tinkering while they are in school so by the time they graduate we have some real innovators at our doorstep.”

Seconding the idea, Sumeet Jain, cofounder, Yocket, stated that the government should set up good scholarship funds for meritorious students to study abroad in top universities. Yocket works with students for education in universities abroad. “For the GDP target of $5 Tn, India will require a huge number of highly skilled workforce. The Indian higher education system is not poised to provide this in a short period of time, the only way is to use the infrastructure of the developed education systems abroad,” Jain said.


Tax relief is something that almost every industry wants to have in some form or the other through the Union Budget 2020. Edtech startups are no different.

Jain said that all edtech services are under the 18% bracket. Educational courses, as well as career counselling, are under this high tax bracket. Wrong career choices can be a big burden on the country. By reduction in tax on these courses and counselling will encourage more people to seek professional help. A lot of reskilling courses are being taxed at 18%, this needs to be reduced as well.

Tiwari too said that as far as education is concerned only the conventional school education has been kept out of GST. The online learning, live classes, innovation and tinkering-based edtech startups still have to pay 18% GST.  The slab should be reduced to 5% for edtech startups, said Tiwari.

Shobhit Bhatnagar, CEO and cofounder, Gradeup said that the edtech industry is a key component of our education sector. Therefore, the government should offer tax benefits to edtech startups in the form of exemptions.

“The issue of angel tax has still not been properly resolved. As a result, investors are reluctant to invest heavily in promising startups because if they do decide to invest heavily then they end up paying a significant tax on it. Therefore, investors require clarity on this front so they can start to invest freely,” Bhatnagar told Inc42.

Mohan Lakhamraju, founder & CEO, Great Learning demanded that tax reliefs or some kind of financial incentives must be extended to those organisations in particular that are helping professionals become proficient in skills, making them future-ready.

“Reducing GST rates for professionals opting for upskilling at an individual level will encourage them to upskill faster,” said Lakhamraju.


The Modi government has taken numerous initiatives to encourage elearning and online courses at various levels. The government has launched an integrated online junction for school education called ‘Shagun’ to improve the primary school system by linking all online portals and websites relating to various activities of the department of school education and literacy in the government of India and all states and union territories.

The government also launched SWAYAM 2.0, an online platform for elearning with an objective to improve GER (gross enrolment ratio) and quality education for “Anyone, Anywhere, Anytime learning.”

Vamsi Krishna, CEO & cofounder, Vedantu, applauds these efforts. “Education has transformed in a big way over the past few years where students and educators are most conscious of adopting engaging learning tools vis-à-vis recorded content. Live online learning is playing a big role in this transformation and its effects are now being witnessed from the metro to smaller towns.”

He added that this change is in sync with India’s digital transformation story and the government’s plan to rejuvenate the education sector with the revamped “National Education Policy” in the last budget. We look forward to more such initiatives and friendly measures for the live online learning ecosystem.

Earlier, releasing the report ‘Trends and Opportunities in Elearning,’ Shantanu Rooj, CEO and founder, Schoolguru Eduserve had said that online learning can provide a potent alternative for the massification of higher education thereby helping the country improve its GER rates from the current 25% to the targeted 30%. “If blended with on-job learning, online education has the potential to dramatically improve the employability of our youth,” he had said.

The report suggested adopting a collaborative approach between edtech players and universities in tech and strategy to revamp medium of instruction and offer subject material in regional languages as only 6% of the students who pass higher secondary learn in English medium.

As Modi government is focussing on Reskill India, Krishna Kumar, Founder & CEO, Simplilearn said, “Building on this momentum, we believe that the next step is to give Indian professionals, anyone looking at building digital capabilities,  the option to choose and pursue the skilling course that will meet their career needs and goals. They should also be given an option to expense the cost of the course through their tax returns. By giving skilling and education for professionals the same treatment as in taxes for health insurance will only encourage more professionals to invest in their skilling proactively.”