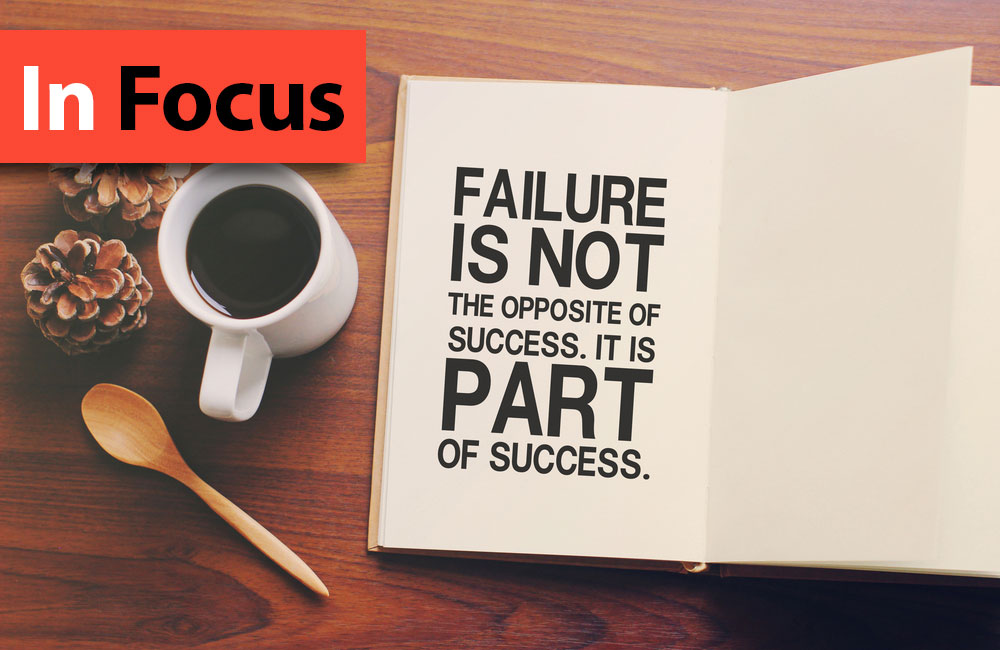 It’s time to bid adieu to 2015. If we look back, the Indian startup ecosystem witnessed a lot of action in the last one year. We flashbacked through 2015 to understand how the Indian startup ecosystem panned out over the past one year and showcase the key developments – the hits & misses, the highs & lows and pivots – in the form of concise listicles. This article is a part of this endeavour – our year-end stories.

According to the data available, more than $7 Bn has been invested in more than 600 startups, in India, in first three quarters of 2015. However, the year wasn’t lucky for all, while few grew remarkably well, few are struggling to succeed while many closed the shutters. Though statistics vary on the failure rate for startups, but it is widely accepted fact that 80-90% startups fail.

Let’s take a look at some of the well known startups that shut their shop and moved on:

AdMagnet was a digital advertising network, spun off from Interactive Avenues. It was launched by DGTL Media Pvt. Ltd. to aggregate millions of ad impressions daily across categories, create audience segments and help advertisers reach highly fragmented Internet users. It provided a transparent platform for advertisers to tap into audiences across sites by various categories, surfing habits, context and other similar features.

The company was reported to suspend its operations in October 2015, without disclosing the exact reasons.

Zobtree was a referral-based recruiting platform where users could refer their friends, colleagues and acquaintances to recruiters. This way the startup helped employees scale employee referral leads by easing the process for the candidates and the company.

The startup worked well in the beginning, but faced scaling up issues. Finally, the startup had to shut shop in early 2015.

Funding: It had raised an undisclosed amount in first round of institutional funding from Helion Venture Partners in October 2014.

Formerly known as Talent Auction, TalentPad was a curated marketplace for technology recruitment. It used to connect employees with the employers in the technology, internet and analytics space. The startup had also acquired a NASSCOM 10,000 Startups incubated hiring and assessment portal, OptimizedBits in May 2015.

According to its founders, it was shut down due of its inability to figure out a scalable business model.

Funding: The startup was scouting for Series A funding of up to $10 Mn

Trevo was a bus aggregation startup started by TalentPads’ founders and employees. It aggregated tourist and chartered buses in Delhi-NCR.

The founders didn’t shared much on the reason behind the closure. However, the startup reportedly struggled to raise funds. This, coupled with high cash-burn rate, caused the startup to shut down in just one month.

Tradus was launched in 2009 with a primarily B2C and C2C focused ecommerce model. Then in 2013, it pivoted to a location-based marketplace which helped consumers search for products from merchants around their locations. However, struggling in that as well, the company once again changed its business model to become a location-based grocery marketplace in 2014. Amidst the revamping, the company also witnessed the exit of its CEO Mudit Khosla.

Finally in March 2015, the website hosted a banner stating ‘We’re under maintenance, We will be back soon’.

Funding: It had raised an undisclosed amount in funding from Seedfund.

Done by None was a web-only women’s fashion brand that had shut down its operation in early 2015. The company was initially launched in February 2011 as Handspick.com and later it was rebranded to DoneByNone in March 2012. One of its investor, Shailesh Vikram Singh, executive director of Seedfund, said that both the co-founders had quit the company due to challenges in raising further investment.

Though there were unstated reason for its shutdown, it was speculated that the company could not raise further funds and its existing investors lost interest in the venture.

All three niche online marketplaces were launched by Vayloo Technologies, along with Lenskart, an eyewear marketplace. BagsKart was launched exclusively for selling bags, JewelsKart was an online jewellery store and Watchkart was an online portal that offered a large collection of watches consisting of all top brands in various categories.

Though there were no announcement made in this regards, but the website of JewelsKart and WatchKart were brought down in late 2014. However, Bagskart resumed its operations in June 2015, however its facebook page also does not show any activity after September 2014. In one of his excerpts, Peyush had said that the reason for shutdown was not unavailable funds, but he saw great opportunities in eyewear business.

Lumos was a home automation startup that built product that could automate lights, fans, ACs and water heaters. The founders built both hardware and software for their products to automate electric appliances.

The startup however, was shut down somewhere around April 2015 , when they realised that there was not enough demand of the product, plus it was over priced. However, the founding members did realise the fact that prior understanding of market and competition is a must, along with ROI.

Funding: The startup raised a funding round led by Shrem Strategies. Prior to this round, it had raised funding twice, once from BCCL’s Springboard Fund and other from Karmvir Avant Infotech Pvt Ltd.

Localbanya was an online grocery startup and the first player to enter this space in Mumbai.  After three years of operation, the startup suddenly stopped taking orders from customers. Rumours were rife that the company had laid-off some of its employees for cash and might downsize its workforce as well. However, the co-founder denied that the firm was shutting down its operations, but he said Localbanya was pivoting its business model building a robust technology backbone.The ‘under renovation’ message has been showing on its website since October 2015.

Dazo, previously known as Tapcibo, was a mobile-only curated on-demand food platform. The startup used to aggregate meals from local partner restaurants and ensured the last-mile delivery to provide a hassle-free customer experience. The company had initially started off well as an Internet-first kitchen, however, eventually pivoted to become an aggregator of selected restaurants.

Without exactly stating the reason for their shut shop, Dazo’s founder and CEO commented that they decided to move on and  work on a new project.

Funding: It raised funding of $150K from ARK Challenge, a startup bootcamp in September 2013, and raised $20K seed fund from TLabs as part of its third batch.

A Delhi-based community marketplace of food that served freshly home made meals by housewives, hobbyists and food lovers. The startup offered a wide variety of home cooked cuisines like Punjabi, Mughlai, Sindhi, Continental and Italian. It had a unique concept of donating one meal per order. It was backed by the Times Group and had Nita Mehta, an Indian celebrity chef, as their Brand Ambassador along with Ramni Ralhan as Chief Mentor.

The startup had quite a long stay in the food-tech segment, but was surprisingly shut down in February this year for undisclosed reasons. One of its founding members, Pankaj Sharma, joined another food tech startup, Yumist, as CTO in August 2015.

OrderSnack was a Chennai-based online portal for take away meals. It use to allow users to search for restaurant that can deliver food in particular area.  It had tied up with about 60 restaurants in the city and delivered food across.

The startup was unable to raise even its first institutional funding and was ultimately shut down.

Funding: It raised an undisclosed amount in angel funding from Powai Lake Ventures, Globevestor and Abhishek Goyal of Tracxn Labs.

Eatlo was a food tech startup launched to provide home made healthy food to office goers and other working people. The startup started with lunch deliveries in December 2014. It operated with a network of about seven chefs from where it sourced food and delivered in about 20 minutes.

The website and app has now stopped taking order.

As compared to last year, the number of startups that have closed down this year is undoubtedly more. Nearly 11 startup had shut shop in 2014, whereas 2015 witnessed 13 startup shutdowns, majority being food-tech startups. 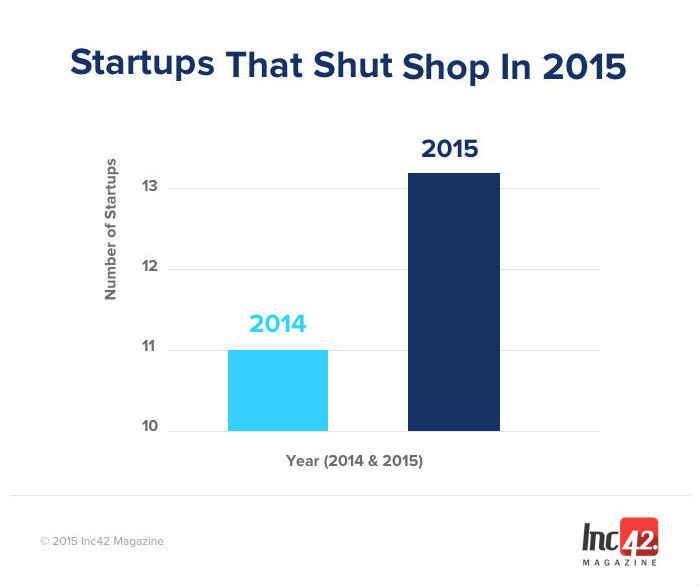 Apart from lack of funds, high cash-burn rate, inability to scale up and funding the right business model were the other major reasons for shutdowns. A number of food-tech startups took their last breath this year. According to venture capitalists (VCs) and investment bankers, food-tech model involves a lot of cash-burn and is very operations-intensive, thus this was expected. Watching over the other sectors, it seemed that startups in data security, analytics and IoT sectors were a secure bet and are faring well as compared to other ventures.

Although, we have been very thorough to include all the shutdowns of this year, there were still many other startups that emerged, struggled and finally faded into oblivion, leaving behind no trace.